What is Waka and Tammy’s Net Worth?

One of the most famous couples of the hip-hop world, Waka Flocka Flame, and Tammy Rivera, tied the knot on May 25, 2014. While Flocka Flame is a popular rapper who established himself in the music industry in his early 20s, his wife, Tammy Rivera, on the other hand, is a singer and television personality. Although the duo was already quite popular, their show ‘Waka & Tammy: What The Flocka,’ which is currently in its second season, has helped them garner more fans in recent years.

The series revolves around the day-to-day life of the couple as they navigate through different relationship issues. People who are impressed by the couple on the show may want to learn more about their careers. So today we are going to have a detailed overview of what they do for their living and how much money they have made so far.

How Did Waka and Tammy Make their Money?

Born on May 31, 1986, Waka Flocka Flame is a rapper who rose to prominence in 2009 with his single ‘O Let’s Do It.’ The following year his debut album ‘Flockaveli’ turned out to be a huge success, and there was no looking back for Waka from then on. In 2011, he released a few mixtapes such as ‘Benjamin Flocka’ and ‘Twin Towers 2.’ In the same year, another album titled ‘Ferrari Boyz,’ collaborative work with Gucci Mane was released by Waka. His most well-known mixtapes are the ‘Salute Me or Shoot Me’ series.

Waka’s song ‘Round of Applause’ featured Drake, who is one of the most famous rappers in the world, and the very next year, he released his second album ‘Triple F Life: Friends, Fans & Family.’ Waka was already a well-established rapper in America by this time, and he went on to release several mixtapes like ‘The Re-Up 11,’ ‘From Roaches to Rollies,’ ‘I Can’t Rap Vol. 1,’ ‘The Turn Up Godz Tour,’ in the next few years. 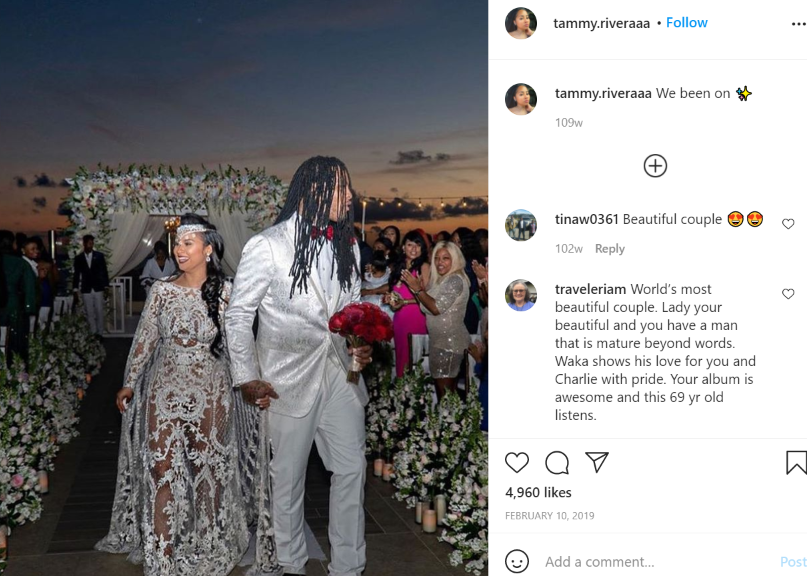 Interestingly, ‘Waka & Tammy: What The Flocka’ is not the first show where Waka and Tammy have made an appearance together; they were also a part of the third season of ‘Growing Up Hip Hop: Atlanta,’ and ‘Marriage Boot Camp: Reality Stars 12 – Hip Hop Edition’ (season 14). According to some reports, Tammy was paid $500,000 for ‘Love & Hip Hop: Atlanta.’ Even though we cannot confirm this, the fact that she and her husband must have earned a handsome salary for the series is a given. Their career so far has been enriching, and they live a pretty lavish lifestyle. So, without any more speculations, let’s have a look at their combined net worth.

Waka and Tammy’s Net Worth

Waka and Tammy’s combined net worth is estimated to be around $8.5 million. The couple is actively involved in the music and television industry; therefore, we can presume that their net worth is likely to increase in the coming years.

Read More: Where is Waka & Tammy: What The Flocka Filmed?