What is Don Lemon’s Net Worth?

Don Lemon is a television journalist who is best known for the late evening news program ‘CNN Tonight,’ where he serves as a presenter. Born on March 1, 1966, Don was raised in Baton Rouge, Louisiana, and attended Baker High School. He was a bright student from a young age and was selected as the class president in his senior year. Don attended the Louisiana State University, but then he later transferred to Brooklyn College, where he graduated with a degree in broadcast journalism. In his college days, he worked with a Fox News affiliate station as a news assistant. So, even before his graduation, Don was already making a name for himself in the world of journalism.

In his 2011 memoir, ‘Transparent,’ Don publicly announced that he was gay. However, his close colleagues, friends, and family already knew about his sexuality for a long time. He later started dating Tim Malone in 2017, and the couple got engaged in 2019. Don’s decades-long career in the broadcasting industry has helped him amass a considerable fortune. But before we look at his net worth, let’s dig deeper into his career so far.

How Did Don Lemon Make His Money?

Don interned at WNYW while he was studying at the Brooklyn College in New York. So, when he graduated, there was no dearth of opportunities in the field of journalism for him. Don worked for some time in Philadelphia and Chicago as a correspondent for NBC affiliates. He also worked as the news anchor for WBRC and at WCAU early in his career before becoming an investigative reporter and anchor for KTVI. For a while, he also reported for the New York City operations of NBC and MSNBC. His work at WMAQ-TV earned him three Emmy awards in the early 2000s, but it was just the beginning of his rise in the broadcasting industry. 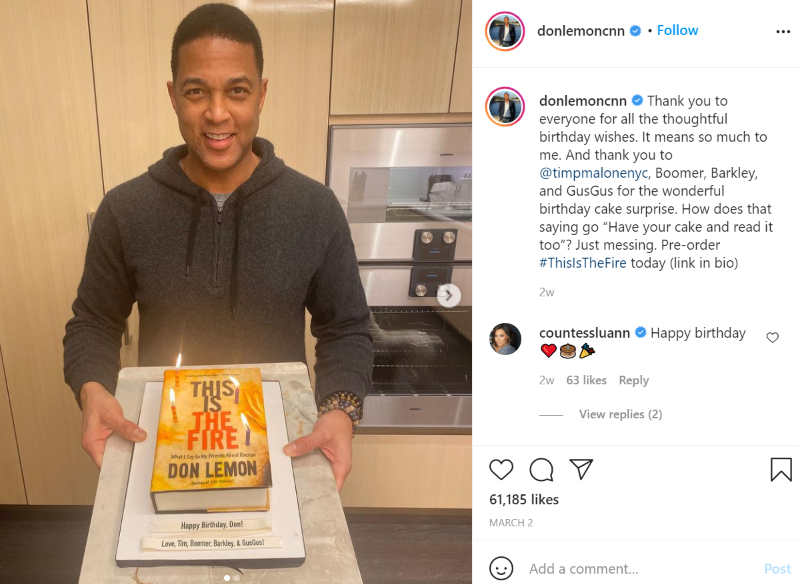 In September 2006, Don started working for CNN. Around this time, Don started voicing his strong opinions on different socio-political issues that plague America. His views, especially on how African American communities can make their lives better, caused many controversies. But Don was never discouraged as he continued to speak his mind. His open criticism for Donald Trump after he won the 2016 elections got him into a lot of trouble as he started receiving death threats in the following year. Don was soon a target for the white supremacists, but he continued to voice his opinions fearlessly.

Aside from being an anchor, Don is also an author. Recently, he wrote ‘This Is the Fire: What I Say to My Friends About Racism,’ which discusses racism in the United States. He is also the author of ‘Everybody’s Scrap Book of Curious Facts: a Book for Odd Moments’ and ‘Transparent,’ a memoir that gives readers a behind-the-scenes perspective of journalism. Don’s career as an author and news anchor has helped him earn a lot of money. So without further ado, let’s have a look at his net worth.

Don Lemon has an estimated net worth of around $12 million. With his career in journalism still going strong, we can presume that his net worth is likely to increase in the upcoming years.

Read More: What is Mike Holmes’ Net Worth?