What is Jennette McCurdy’s Net Worth?

Jennette McCurdy is an actress, producer, and singer who is popular for her role in shows like ‘iCarly,’ ‘Sam & Cat,’ ‘ Malcolm in the Middle,’ and ‘Zoey 101’. Born on June 26, 1992, in Los Angeles, Jennette is the youngest of four children and has three elder brothers. She was raised in Garden Grove, California, and had a rough childhood as her mother was diagnosed with breast cancer when she was just three years old. However, the challenges in her life did not stop her from starting her career, as she landed her first acting job on Mad TV when she was just 8 years old.

Unfortunately, her struggle in personal life continued as she lost her mother in 2013, after fighting against cancer for seventeen long years. Despite the woes of her personal life, Jennette saw great success in her work-life as she successfully landed one acting role after another. If you are also wondering how Jennette McCurdy made her fortune, then you have come to the right place. Here’s everything you need to know.

How Did Jennette McCurdy Make Her Money?

After landing her first acting role in 2000 on Mad TV, Jennette worked on numerous popular television shows like ‘CSI: Crime Scene Investigation,’ ‘Lincoln Heights,’ ‘Will & Grace,’ ‘The Penguins of Madagascar,’ ‘Law and Order: SVU,’ and ‘Close to Home.’ When she was just 13 years old, Jennette was nominated for a Young Artist Award, and a few years later, in 2009, she was nominated for Teen Choice Award for her role in ‘iCarly.’ Her popularity soon got her several commercials, but Jennette did not limit herself to acting only. 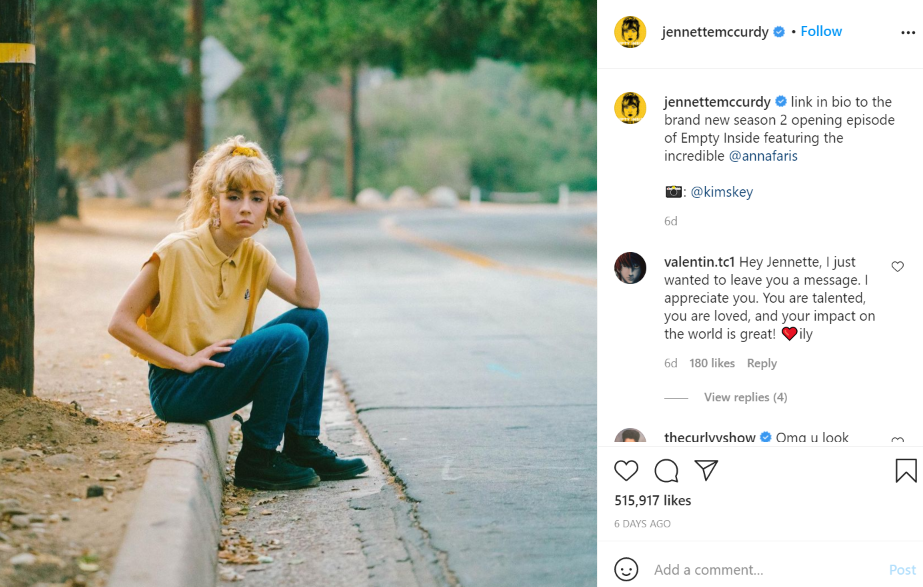 In 2008, Jennette publicly announced that she was working on her debut album. “So Close,” her first single, was released just a year later in May 2009. “Not That Far Away” and “Generation Love” are her most successful songs. In the meantime, her acting career flourished as she worked in movies like ‘The Death and Return of Superman,’ ‘Snowflake, the White Gorilla,’ ‘Little Bitches’ among many others. However, her most memorable experience was working in the film ‘Hollywood Homicide’ alongside her inspiration, Harrison Ford.

Jennette made her directional debut in the short movie ‘Kenny’ and later went on to direct other short films like ‘The Grave’ and ‘Strong Independent Women.’ It is therefore not surprising that Jennette earned quite a fortune from a long and successful career as an actor and singer.

Jennette McCurdy has an estimated net worth of about $5 million. Despite the success, Jennette has quit acting since 2018 because of her negative feelings towards her career. In her recent interview, she expressed that she was ashamed and embarrassed by her acting career and only did it to support her family. She claims she was led into the career by her mom and wanted no part of it herself. So, it’s unlikely that we will ever get to see her act again. Therefore, it would be hard to predict how her net worth will look in the coming years.

Read More: What is Sacha Baron Cohen’s Net Worth?