What is Mama June’s Net Worth?

Born on August 10, 1979, June “Mama June” Shannon is a reality television star and the Shannon family’s matriarch. She was only two years old when her parents, Marvin Shannon and Sandra Hundley, got divorced. Therefore, Mama June’s childhood was not easy, and to make matters worse, June became legally blind at a very young age due to an untreated cataract. She was only fourteen years old when she got pregnant with her first child, Anna, and she soon had to drop out of school because of it. Although she later earned her GED, Mama June struggled with obesity as an adult. She lost 300 pounds after undergoing bariatric surgery and making changes to her diet and lifestyle.

Mama June, especially in her teenage years, had relationships with men who later got convicted for sex offenses. The biological father of Jessica and Lauryn tried sexually exploiting a minor and was later found guilty. Mark McDaniel, another partner of Mama June, even abused Anna, her eldest child. In 2019, Mama June and her current partner Geno Doak were arrested for drug possession, throwing her personal and professional life in turmoil. In the last decade, Mama June has been a part of a few reality TV shows that have helped her earn quite a lot of fame and a respectable fortune. But before we get to that, let’s look at her career so far.

How Did Mama June Make Her Money?

Mama June made her first television appearance with her daughter, Alana, on TLC’s ‘Toddlers & Tiaras.’ It was the first time that The Shannons were getting introduced to the U.S. viewers and the family soon became a household name in the following years. Alana was really liked by the viewers who couldn’t get enough of her funny comments. In 2012, The Shannons became even more popular, thanks to the TLC series ‘Here Comes Honey Boo Boo,’ which ran for four seasons before getting canceled in its fifth season after it was revealed that Mama June was dating a known sex offender. 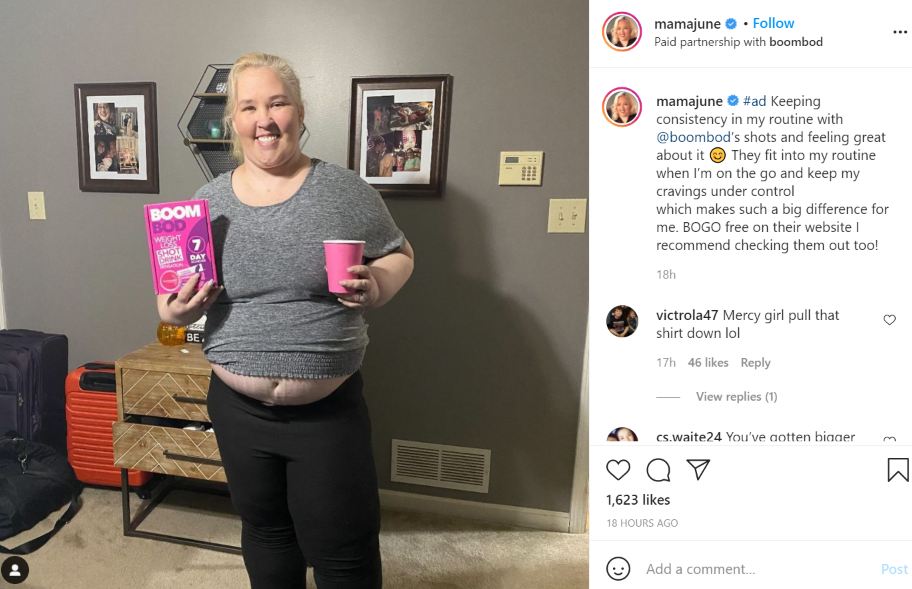 In 2017, Mama June appeared in ‘Mama June: From Not to Hot,’ which captured her transformation as she shed about 300 pounds by embracing a much healthier lifestyle. The next season of the show was also released in 2018. Apart from reality television shows, where she has made appearances with her family, Mama June has also been to popular talk shows like ‘Dr. Phil’ and ‘The Doctors.’

Her controversial life choices and career as a reality television star have helped her gain a significant following on social media. Her social media reach has brought several lucrative endorsement opportunities, and she regularly posts in collaboration with different brands. Although she had earned a significant amount of money through reality TV, Mama June has publicly accepted that she has struggled with drug addiction and has spent about a million dollars on substance abuse. Reportedly, Mama June also spent close to $75,000 on cosmetic surgery. Let’s now have a look at her net worth.

Mama June has an estimated net worth of around $60,000. She claims to be sober now and is apparently on the path to reconciling with her kids. Thanks to her brand collaborations on Instagram and shows like ‘Mama June: Road to Redemption,’ it seems that June’s career will soon be back on track. So, we can expect a significant rise in her net worth in the coming years.