What is Olivia Jade’s Net Worth?

Olivia Jade is a YouTuber, social media personality, and Mossimo Giannulli and Lori Loughlin’s daughter. Even before she had graduated from high school, Olivia was already starting to gain a significant social media following on different platforms, and it seemed that she had a bright future ahead of herself. Olivia graduated from Marymount High School in 2018 and enrolled in the University of Southern California. However, before she could graduate, her life was turned upside down when details about the Rick Singer college admissions scandal began to surface.

In 2019, it was revealed that Olivia’s parents had paid Singer $500,000 to get their daughters enrolled at the prestigious University of Southern California. She and her older sister are no longer enrolled in the university in the wake of the scandal. Olivia not only saw her parents struggle in court and then serve time in jail, but she also lost brand endorsements due to the entire fiasco. Before we discuss her net worth, let’s have a look at her career so far.

How Did Olivia Jade Make Her Money?

Back when she was in high school, Olivia Jade started her YouTube channel where she posts fashion, makeup, and lifestyle videos. In 2013, she joined Instagram and began posting there as well. It marked the beginning of her promising career as a social media influencer. Although initially, it seems that Olivia was interested in sharing pictures with family and friends only, she later started doing brand endorsements, thanks to her newfound fame on YouTube. She slowly gained millions of followers in just a few years and was doing advertisements and brand endorsements for companies like Sephora, TRESemmé, and Amazon. 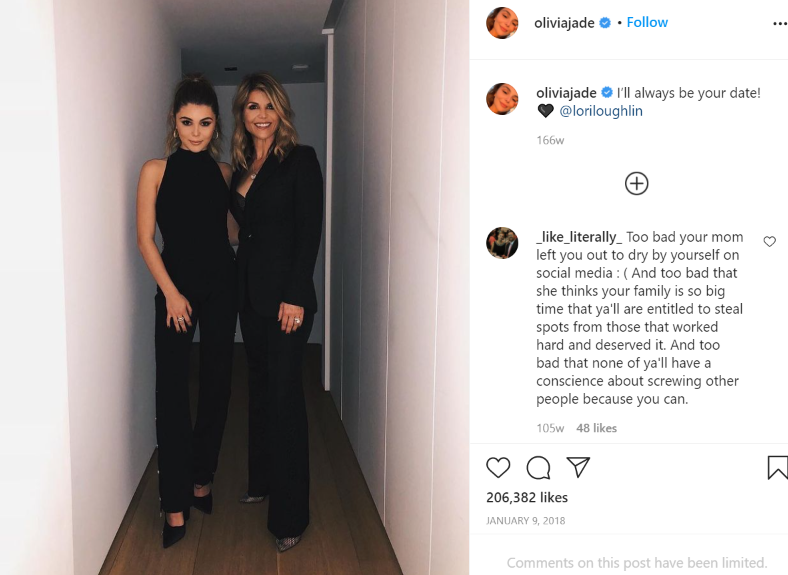 Olivia’s even appeared in ‘Tap that Awesome App’ in 2016, and it seemed that her social media fame would soon get her into the film and television industry. However, it was not to be, as her parents got involved in the biggest college admissions scam in America’s history. She was soon a subject of online abuse as thousands of people flocked to her social media accounts to mock her for the scandal. Eventually, she was forced to limit comments on her posts, but her troubles were far from over. Brands soon started distancing themselves from her, and she lost lucrative sponsorship deals. She soon stopped posting videos on YouTube altogether.

Her brief return in December 2019 was followed by an attempt to revive her latent social media career in the following years. Now, she is posting regularly on Instagram and YouTube and garners hundreds of thousands of views on every video, if not millions. Although it will probably take some time before brands approach her as much as they used to before the admissions scandal, it seems Olivia’s life is finally coming back on track. Her career as an influencer and Youtuber has helped her earn a lot of money, so let’s have a look at her net worth.

Olivia Jade’s net worth is estimated to be around $1 million. This does not include any inheritance that she might receive from her parents, who have a combined net worth of $88 million. In the coming years, she is likely to be approached by more brand endorsements and advertisement opportunities as her social media following grows exponentially. So, we can presume that her net worth is expected to increase in the future.