Where Are the Lincoln Project Co-Founders Now? 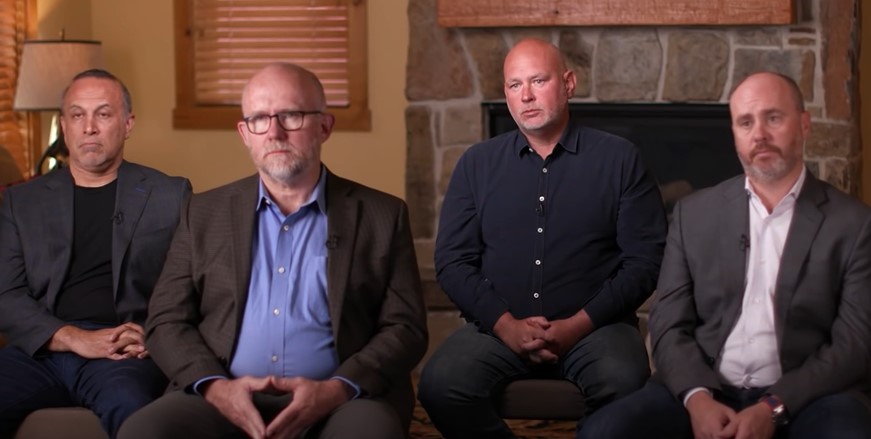 Founded in October 2019, the Lincoln Project is a Political Action Committee (PAC) with several prominent former and current Republican consultants and strategists with the sole aim of preventing Donald Trump from winning the 2020 elections. The committee quickly became famous for its scathing ads against Trump, building a reputation as being creative yet ruthless. Showtime’s docuseries ‘The Lincoln Project’ focuses on the committee’s inception and how the members raised millions by campaigning against Trump. So, if you want to know more about the co-founders, we’ve got you covered.

Where is John Weaver Now?

Born in Texas, John Weaver made a name in local politics before becoming the Senior Advisor for John McCain, a role he held for many years. Apart from that, John also was the Chief Strategist for former Ohio governor John Kasich during his unsuccessful run at the White House. He then co-founded the Lincoln Project with several others, but several damaging allegations later caused a furor. In January 2021, it was revealed that multiple young men accused John of sending unsolicited sexual messages, including a 14-year-old.

Some claimed that John offered to assist them in their political careers in exchange for sexual favors. John later apologized, claiming that he thought the interactions were consensual, and said, “The truth is that I’m gay. And that I have a wife and two kids who I love. My inability to reconcile those two truths has led to this agonizing place.” He then stepped down from his role at the Lincoln Project. From what we can tell, John has since maintained a low profile and lives in Texas.

Where is Steve Schmidt Now?

Steve Schmidt, a veteran political strategist, previously ran John McCain’s campaign to become President Prior to that, he was Arnold Schwarzenegger’s campaign manager during his re-election campaign in 2006. Apart from that, Steve was part of the George W. Bush administration. However, he left the Republican party in June 2018 after the Trump administration’s policy of separating families at the US-Mexico border came to the fore. In 2020, Steve announced he was joining the Democratic Party.

However, Steve faced controversy because of John’s sexual harassment allegations. It was reported that in June 2020, an employee of a company hired by the Lincoln Project talked in an email about instances of John’s past behavior, which the other leaders later learned. Steve, however, said none of them were aware of any internal allegations regarding John’s inappropriate behavior. In February 2021, he stepped down from his position in the Lincoln Project.

In a statement, Steve revealed that he had been sexually abused as a child. Steve said, “I am resigning my seat on the Lincoln Project board to make room for the appointment of a female board member as the first step to reform and professionalize the Lincoln Project.” In addition, he remains the Principal at SES Strategies. In 2022, Steve started a Substack account. He is a proud father of three kids he shares with his ex-wife Angela Schmidt and splits his time between Utah, California, and New York.

Where is Rick Wilson Now?

Rick Wilson has been part of the American political landscape for many years. He started with the 1988 presidential campaign of George H. W. Bush and has been an influential figure since then. Besides advertising, Rick has provided strategic counsel to many other political candidates and government clients. He is also a New York Times bestselling author in addition to writing a column for The Daily Beast. Rick has been featured on news channels as an analyst and has written articles for publications like the Washington Post, Rolling Stone, and the New York Daily News.

Rick has long been against Donald Trump and worked as part of the Lincoln Project to prevent his re-election in 2020. He lives in Tallahassee, Florida, with his wife, and they have two kids together. Rick enjoys hunting and fishing, and he is a pilot as well. In September 2022, in response to Trump threatening legal action against the Lincoln Project, Rick said, “Go for it! Go for it, b****. Come at me. I can’t wait. We’re delighted by the thought you would try to sue us, Donald.”

Where is Jennifer Horn Now?

Jennifer Horn started her career at a health insurance company for about four years before helping her husband, William “Bill” Horn, with his management consulting firm. Then, after stints as a journalist and an award-winning radio talk show host, Jennifer got involved with New Hampshire politics. She became the first woman to be nominated by the Republican Party when she was picked in 2008. A long-time critic of Trump, Jennifer reached out to Independents and Republicans as part of the Lincoln Project.

Italy just elected their most far-right, extremist since Mussolini.

And GOP leaders are cheering. https://t.co/XigzMf2TuE

However, Jennifer left the committee in early 2021 after John’s accusations were made public. She said, “When I spoke to one of the founders to raise my objections and concerns, I was yelled at, demeaned, and lied to.” On the other hand, the Lincoln Project put out a statement saying she was looking for a signing bonus and other perks. Before that, in December 2020, Jennifer left the Republican party, later registering as an Independent.

The Strategic Communications Consultant is currently a member of the USA Today Board of Contributors and a 2021 Senior Practioner Fellow at the University of Chicago Center for Effective Government. Jennifer now lives in a town in New England with Bill, with whom she has four sons and a stepdaughter. The Horns dote upon their grandchildren and love spending time with them.

Where is Ron Steslow Now?

Ron Steslow has spent about two decades in the country’s politics at the highest level. After leaving the Republican Party in 2016, he found his way to the Lincoln Project in 2019. However, controversy followed not too long after, as Ron was the one who received the email in June 2020 about John’s troubling behavior. It was from an employee working for his company, Tusk. It was reported that Ron tried to have John pushed out, but he was unsuccessful.

Ron left the committee towards the end of 2020 and has since gone on to do other things. He found a place in Fortune Magazine’s Top 40 Under 40 in Government and Politics. has owned Tusk, a political strategy and marketing solutions firm, for the past 11 years. Apart from that, Ron is the creator and host of Politicology, a podcast. Ron currently lives in Washington, DC, and is active on Twitter.

Where is Reed Galen Now?

Reed Galen is a political strategist who worked as the Deputy Campaign Manager for John McCain’s presidential campaign in addition to Arnold Schwarzenegger’s re-election campaign in 2006. Apart from that, he was part of both George W. Bush’s presidential campaigns and later worked in the private sector. There, Reed advised several well-known companies on political communications and legislation.

Where is Mike Madrid Now?

Mike Madrid graduated from the Edmund G. Walsh School of Foreign Service at Georgetown University, Washington DC, in 1997. Throughout Mike’s career, he worked on Latino communications and outreach strategies in states like California, Texas, and Florida, among others. In the past, Mike was the Press Secretary for the California Assembly Republican leader and the Political Director of the California Republican Party. Mike left the Lincoln Project in December 2020 after some internal strife.

Choosing the best of really bad options – What’s next for the Herschel Walker campaign? Check out this episode: https://t.co/mOLjTgAgPq

It was reported that Steve, John, Rick, and Reed had signed an agreement with a media house, which Mike, Ron, and Jennifer didn’t know. The relationships frayed sometime after the 2020 elections, leading to several co-founders leaving. Currently, Mike lives in Sacramento, California, and is the Principal of GrassrootsLab, a public relations firm specializing in state and local government, technology, and innovation.

In April 2022, Mike revealed his plans to travel to Ukraine after his political consulting firm was approached to prevent the spread of misinformation. The Political Consultant said his mission was to reportedly convince at least some Russians that Vladimir Putin wasn’t the ideal leader. Apart from that, Mike also hosts a podcast discussing race, culture, and politics.

Where is George Conway Now?

George Thomas Conway III is a lawyer who supported Donald Trump before becoming his vocal critic later on. His wife, Kellyanne Conway, was Trump’s Campaign Manager and later worked as the Senior Counselor to the President. While George was one of the founders of the Lincoln Project, the allegations against John and how the committee handled it led him to say that it should shut down.

It's a shame, and we shouldn't forget the hard work of so many people and the positive things the organization did, but yes, I think this is right. https://t.co/To9dKcrigm

George stated that he had no operational role and was an unpaid advisor with the Lincoln Project. Currently, the lawyer is also a contributing writer for the Washington Post and seems to live in Washington, DC. Regarding Trump’s recent legal woes as part of the investigation into the Capitol Riot and mishandled classified documents, George said, “I think he could go to prison, but it is more likely that he will serve home confinement. In all likelihood, he will be convicted of multiple felonies.”

Read More: Where Are the GameStop Investors Now?