Where is Epix’s Rogue Heroes Filmed? 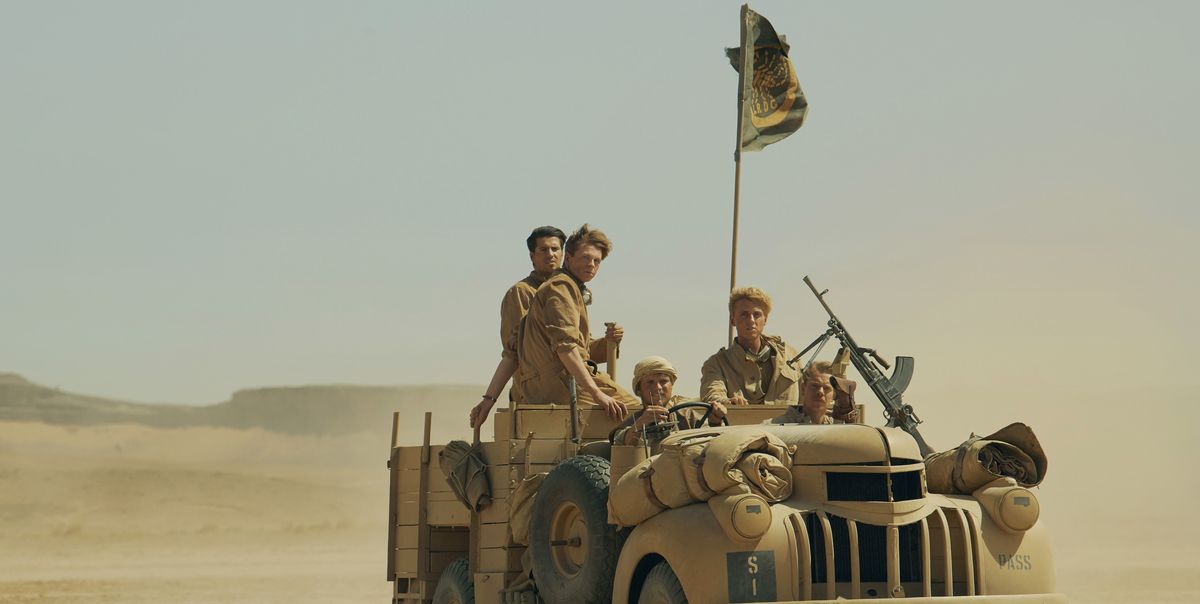 Based on Ben Macintyre’s book of the same name, Epix’s ‘SAS: Rogue Heroes’ AKA ‘Rogue Heroes’ is a historical drama series that follows the origin and the remarkable feat of the British Special Air Service (SAS), operating during WWII. Created by Steven Knight (‘Peaky Blinders’), it narrates the real-life inspiring story of David Stirling (Connor Swindells), who was convinced that a small force of highly trained unit could attack different German targets in a single night by using the element of surprise.

The high-octane action sequences and gun-ablaze moments resonate with the blazing sun and desert storms that capture the audience’s attention. With sandy deserts and a sun-soaked backdrop for the action scenes, you might wonder where was ‘Rogue heroes’ filmed. If you are curious to know where the historical drama series was filmed, we have got you covered.

Set in 1940s Cairo, ‘Rogue Heroes’ was filmed in multiple locations in the United Kingdom, namely Gloucestershire, London, and Suffolk as well as the North African country of Morocco and Norfolk in southeastern Virginia. Principal photography began in March 2021 and lasted almost seven months before it was wrapped up in October 2021. Let us take you through the details!

Though the narrative is set in the Egyptian capital of Cairo, the cast and crew spent almost three months shooting the action-packed desert scenes in the Sahara Desert in Morocco. Director Tom Shankland exhibited mixed feelings about the location. On the one hand, he faced significant challenges at the site due to frequent sand storms, while on the other hand, he said that the natural sandstorms saved a lot of money supposed to be spent on visual effects.

Shankland told Express UK, “Day one, we had a sandstorm, day two we had half a sandstorm, day three we had an all-day sandstorm, day four we had a quarter of a day of a sandstorm.” He added, “Sandstorms we can’t do anything about, and also, we got some great footage of them for the series which were otherwise going to costs us a lot of money in visual effects, and we got that for free. I like to be positive about that.” Despite the challenges caused by natural phenomena, the location served as the perfect backdrop and added further authenticity to the scenes set in Cairo.

The executive producer of the series, Karen Wilson, also highlighted the significance of the choice of location. She told The Sun, “It was crucial to get to Morocco, which proved to be one of the biggest challenges. “On top of Covid and feeling isolated, and all those things, they shut the border so we had to find a way actually to get our team into the country.” Another crew member, stuntman Olly Lloyd, talked about the difficulties the cast and crew faced during filming. He told BBC, “I saw plenty of scorpions, and snakes were being caught before we got to set, to make sure it was safe.”

Lloyd revealed that sometime the temperatures would cross 53C, adding to the challenges. “It was embodying the spirit of what the SAS went through at that time, we were living in the same conditions that they did,” he added. Despite the hardships the cast and crew faced, the series’ success is owed to the location. The Sahara Desert not only elevated the visuals and complemented the narrative that embodies the hardship that the SAS went through during WWII. You might recognize the desert from notable films such as ‘The Mummy,’ ‘Prince of Persia: The Sands of Time,’ ‘Spectre,’ and others.

Gloucestershire is a county town in South West of England, which lies on River Severn. A few of the film’s scenes were shot in a quarry in Gloucestershire, including the action-packed crash-landing parachute scene of Paddy Mayne (Jack O’Connel). The location is a popular one, used by many other productions including, ‘The Crown,’ ‘Sex Education,’ ‘Bridgerton‘, and others.

Norfolk is a non-metropolitan county in East Anglia in England that borders Lincolnshire, Suffolk, and Cambridgeshire. Elveden Estate near Thetford in Norfolk served as the Cairo hospital and the location for the filming. The Norfolk Military Vehicle Group was consulted by the show’s makers and helped them acquire vintage vehicles. Ian Clark, a group member, was asked to provide his expertise. He told The Eastern Daily Press, “I got the call from the SAS in London about two years ago, and they told me all about the series and said the producers were looking for advice on Jeeps, trucks and colors, and things like that. They were also looking for two or three Jeeps and a truck.”

He continued, “One member of the group, Dave Knudson, has six of them, so he sold them the Jeeps, and then we helped to find them a truck. They then painted them in desert colors, and another member, John Morter, found them a command car they were looking for”. Other popular films and series shot in the location are ‘The Old Man,’ ‘Good Luck to You, Leo Grande,’ ‘Stardust,’ and others.

Suffolk is an English ceremonial county in East Anglia. The cast and crews established their setup for a few scenes at RAF Bentwaters in Suffolk, close to Tunstall. The desert camp and a few Jeep attacks were filmed at this site. Many plane shots featured in the series had also been shot in the location. Other notable shows and films shot in the location are ‘The Haunted Hotel,’ ‘Detectorists,’ ‘The Fourth Protocol,’ and others.

A post shared by THE SPECIAL PROJECTS CONSULTANCY (@thespecialprojectsconsultancy)

A few of the scenes from the series were shot in a film studio in London, the capital city of England. London, lying on River Thames, in south-east England, is home to a number of notable film studios where popular films are shot. Amongst notable productions in London studios are ‘Enola Holmes 2,’ ‘Andor,’ ‘The Peripheral’, ‘Inside Man (II)’, and others.