Where is Mark Norwood Now?

Christine Morton and Debra Baker were killed by the same person less than two years apart. But one murder remained unsolved while an innocent man sat behind bars for more than two decades for the other. In the end, DNA evidence proved beyond a reasonable doubt that Mark Norwood was the one who killed Christine and Debra. Investigation Discovery’s ‘Detective Diaries: Guilty Until Proven Innocent’ chronicles how the two cases were solved. Mark evaded justice until 2011 when he was arrested at his home in Texas. So, if you’re curious about what happened to Mark since then, we’ve got you covered.

Who is Mark Norwood?

Mark Alan Norwood had been in and out of prison most of his life. Born in March 1954, his family moved around the country while he was growing up and eventually settled in Austin, Texas, in 1970. His previous convictions included receiving stolen property, aggravated assault, arson, and burglary, among other charges. At the time of his arrest in November 2011 in Bastrop County, Texas, he lived with his mother. 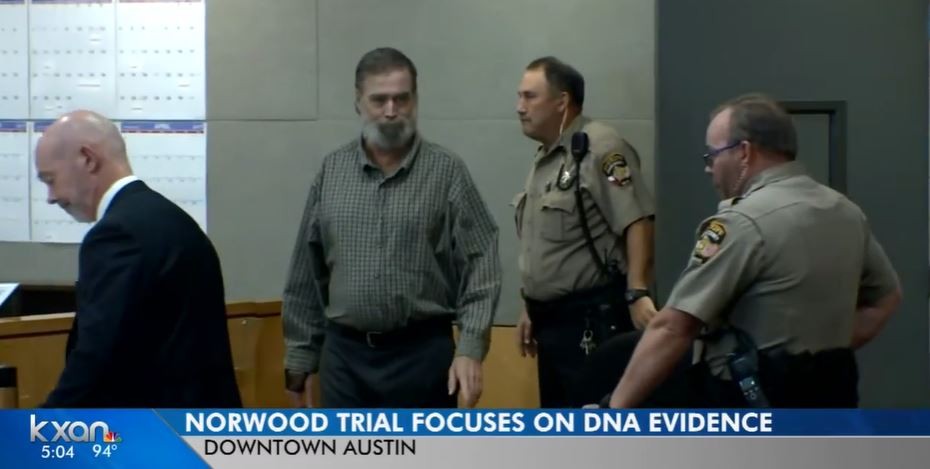 Christine Morton and Debra Baker were bludgeoned to death with a blunt wooden object while they slept in their homes. While Christine’s husband, Michael, was sent to prison for her murder, Debra’s case remained unsolved. When the Innocence Project decided to pursue Michael’s case, they realized that there was a lot of evidence that pointed to someone else being the killer.

Neighbors reported seeing a man with a green van in the area around the time of Christine’s murder in 1986. Furthermore, statements from Michael and Christine’s 3-year-old son mentioned the child witnessing the slaying. Eric told his relatives that he had seen “a big monster with a big mustache” kill his mother. He also described the crime scene in detail and stated that Michael wasn’t at home when the murder occurred. The prosecutor in Michael’s case was later accused of withholding evidence from his defense.

But it was a blue bandana that was found close to the Morton home that turned the case on its head. Michael’s defense was eventually able to get the bandana tested for DNA, leading to Mark Norwood. The bandana had Christine’s blood along with another DNA profile. When placed in CODIS, it returned Mark’s name, a convicted felon, as a match. After noticing the similarities in Christine and Debra’s murders, the authorities compared the DNA from pubic hair found at Debra’s scene, which matched Mark’s profile.

Where is Mark Norwood Now?

In March 2013, Mark was found guilty of capital murder in relation to Christine’s death. More than three years later, in September 2013, he was also convicted of Debra’s murder. He received life sentences in both cases. After Mark’s conviction for Christine’s death, Michael said, “It’s not a celebration, it’s not a happy day. There’s that feeling of ‘finally.’ It has helped us heal, so we can go on without much animosity or anger.” Mark remains incarcerated at the James V. Allred Unit in Iowa Park, Texas. He will be eligible for parole in 2031.

Read More: How Did Christine Morton and Debra Baker Die?