Where is Survivor Kristy Frensley Now?

The day of October 15, 2008, went down as a black one in Kentucky’s history as a vicious massacre of the younger ones of an entire family unfolded in the city of Livingston. The three children, ranging from 5 years to 17 years, were stabbed to death, and their mother, Kristy Frensley, was raped, stabbed, and left for dead. The assailant then set the whole Frensley residence on fire, leaving the children and Kristy inside. Due to her presence of mind, Kristy somehow survived, but all her children were dead.

The horrific incident came to a conclusion with the arrest of an ex-soldier named Kevin Dunlap, who was tried and given the death sentence for the heinous crimes. Investigation Discovery’s ‘Evil Lives Here: We Looked Happy’ dives deep into the case, arranging all the events and facts chronologically for the viewers to grasp the intensity and viciousness of the crime. If you’re curious about what exactly happened and the current condition of the surviving mother, Kristy, we have got you covered. Let’s get to the details then, shall we?

Kristy Frensley lived with her three children, Ethan Frensley, 5, Kortney McBurney-Frensley, 14, and Kayla Williams, 17, in a home located at 169 Military Road in Roaring Spring, just about a mile away from the Fort Campbell military post in southeastern Trigg County, Kentucky. On October 15, 2008, she was working in her yard when a man in a DirecTV T-shirt approached her. Kristy said she had seen him before when he had stopped at her home about a week or two before the incident to ask for directions. Kristy’s home was on sale and the stranger, Kevin Dunlap, even asked her about it. 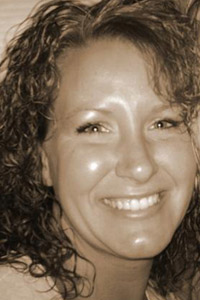 While Kristy was showing him the house, Dunlap, who was carrying a black handgun and white plastic cable ties, grabbed her neck, pulled a gun to her head, took her to her bedroom, and zip-tied her hands and ankles. Kristy said that Dunlap asked her about the names of her children and the time they returned from school. When they arrived, he forced the kids into another bedroom. He gagged them with pantyhose, tied Kayla and Kortney with zip ties, Ethan with pantyhose, and moved them to another part of the house.

Dunlap then came back and raped Kristy. He washed her, placed her in her bed, and tried to kill her by strangling her and then smothering her with a pillow. However, when both the methods failed, he stabbed her with a butter knife and tried to cut her neck. Examiners would find two stab wounds in her back, once in her left ear, and four wounds in the neck, along with lacerations. Dunlap was so brutal that eventually, the handle of the knife broke and got lodged into her neck.

Kristy understood the importance of staying alive to help her children and decided to fake her death. She closed her eyes and stopped her breathing, which fooled Dunlap. He covered her half-naked body with a blanket, set her bedroom on fire, and left the room. She could see Ethan lying on the hall floor and tried to go towards him, but her foot caught fire. She somehow managed to roll to the swimming pool through a French window in the bedroom, where later, one of the sheriff’s deputies rescued her. But her children couldn’t survive Dunlap’s brutal attack and the ensuing fire that engulfed their home.

Emergency respondents found Kristy alive and rushed her to Jennie Stuart Medical Center. Based on witness testimony and DNA analysis, Dunlap was arrested three days later. She couldn’t manage to identify him from a lineup of 6 photographs shown to her by the police, though she said it was the change in his hairstyle that confused her. Talking about Kristy’s condition, Trooper Dean Patterson said, “It took some time before she was able to speak to us and assist us. It took several hours until her condition improved to the point where she could communicate.”

Where Is Kristy Frensley Today?

On October 18, 2008, a Trigg County Grand Jury indicted Kevin on a multitude of charges — one count each of first-degree rape, first-degree burglary, attempted murder, first-degree arson, and 3 counts each of tampering with physical evidence, capital kidnapping, and capital murder. On March 19, 2010, Dunlap was sentenced to death, over a month after he pleaded guilty.

On April 17, 2009, Kristy attended the trial of Dunlap in a Livingston County courtroom. She was ushered into the court by a sheriff’s deputy, where she sat about 40 feet away from the perpetrator. As per reports, she stared intently at Dunlap, her eyes never leaving him throughout the trial, though she never uttered a single sound. The prosecutor called many of her friends and neighbors to the stand to testify. Kristy left the courtroom before the prosecutor pulled up images of the crime scene for the jury to view. However, in February 2010, she testified against Dunlap, relaying the events of the worst day of her life.

After the horrific incident that led to the death of her children and her being badly injured, Kristy reportedly moved to Ohio to stay with her family. But in November 2018, she allegedly decided to shift back to Livingston, Kentucky. In the middle of the purported move, she was likely diagnosed with Stage 2 breast cancer. She reportedly underwent a double mastectomy in January 2019. Kristy Frensley presently seems to reside in Kentucky.