Where to Stream Kanojo mo Kanojo? 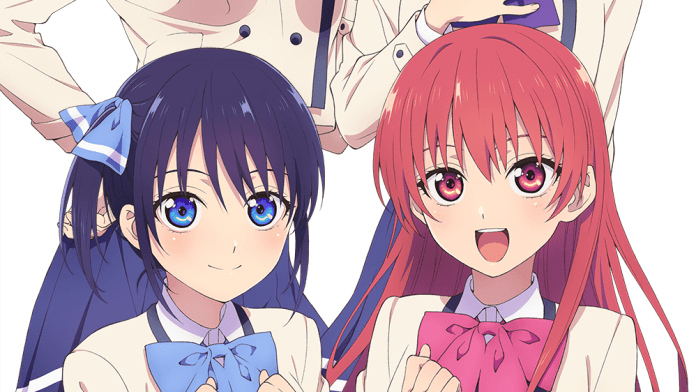 Based on a series by manga artist Hiroyuki, ‘Kanojo mo Kanojo’ or ‘Girlfriend, Girlfriend’ is a romantic–comedy anime series that revolves around an intense love affair between Naoya Mukai and his girlfriend Saki Saki, which is complicated by a proposal from a cute girl who is willing to go to any length to be with the boy she loves. Curious to learn more about its premise or where it can be streamed? We have got you covered.

What is Kanojo mo Kanojo About?

Naoya Mukai has been in love with Saki Saki, his childhood friend, for as long as he can remember. However, he has struggled to open up about his feelings for years and could never bring himself to express his love. But luckily, when he does, after years of overthinking and planning, the girl of his dreams, Saki-chan, accepts his proposal, and the couple begins dating. Their intense affection for one another appears to consume them entirely, and the couple firmly believes that they have found the love of their lives.

Naoya vows always to be faithful to Saki, but all of that quickly goes out of the window when Nagisa Minase confesses his love for him. Although he is initially conflicted, he later realizes that he could not bring himself to reject Nagisa’s love. So, he comes up with the strange idea to date the two together – with their permission. When he proposes the idea to Saki-chan, she is naturally offended and hurt, but Nagisa and Naoya eventually convince her for the three-way affair.

Since Naoya lives alone, his two girlfriends decide to move in with him, and it marks the beginning of a complicated love triangle relationship whose underlying issues come to the fore as time passes. But can their eccentric relationship that poses a challenge to all social norms survive? In order to find out, you have to watch ‘Kanojo mo Kanojo.’ Here’s all the streaming information that you are going to need.

Is Kanojo mo Kanojo on Netflix?

No, ‘Kanojo mo Kanojo’ is not accessible on Netflix and is unlikely to arrive on the platform any time soon. People with the subscription of the streaming giant can watch other romantic anime like ‘A Whisker Away,’ ‘Teasing Master Takagi-san,’ or ‘Violet Evergarden.’

Is Kanojo mo Kanojo on Hulu?

People looking for ‘Kanojo mo Kanojo’ on Hulu will be disappointed since the series is not part of its otherwise extensive anime catalog. However, we recommend our readers looking for another romantic anime to watch, ‘Your Lie in April.’ The series revolves around a genius pianist struggling to find his rhythm after his mother’s untimely demise, whose life is turned around by Kaori Miyazono, a violinist who teaches him to savor every moment.

Amazon Prime subscribers will have to look for ‘Kanojo mo Kanojo’ on other platforms. Viewers who are looking for other similar series can stream ‘Love and Lies,’ ‘Toradora!’ or ‘Wotakoi: Love is Hard for Otaku.’

Is Kanojo mo Kanojo on Crunchyroll?

‘Kanojo mo Kanojo’ is licensed for streaming outside of Asia by Crunchyroll. So, you can head here to stream the anime if you have a subscription.

Apart from Crunchyroll, the romantic-comedy anime series is also accessible on VRV in some countries.

How to Stream Kanojo mo Kanojo for Free?

VRV gives its first-time subscribers a 30-day free trial, while Crunchyroll comes with a 14-day free trial. Therefore, you can stream the series for free in the trial period. However, we encourage our readers to pay for the content they wish to consume online.