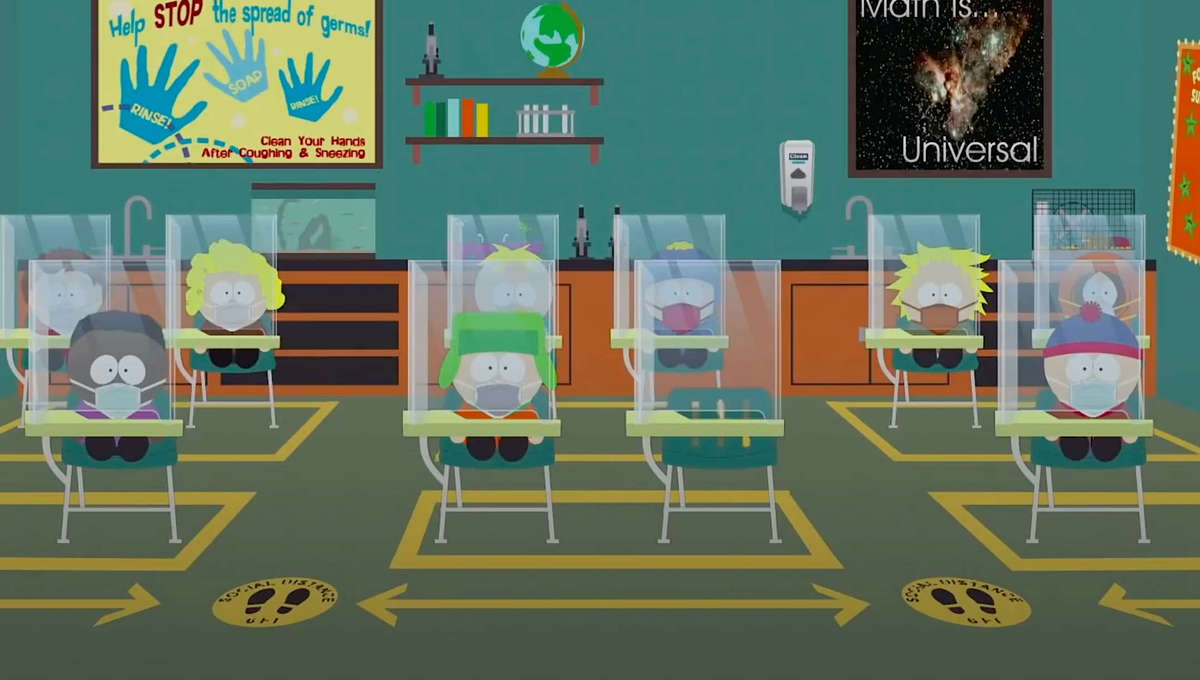 ‘South Park’ is a long-running animated comedy show, strictly for grown-ups. During its 23-season run so far, ever since its inception in 1997, ‘South Park’ has been criticized for being ridiculously inappropriate and wildly offensive. People have, over the course of the last 25 years, petitioned to cancel the show no less than a zillion times (not kidding). But ‘South Park’ is still going strong and shows no sign of slowing down the humor train. Why? Because those who can stomach its humor appreciate ‘South Park’ for its genius. The show is known to feature scenarios based on current affairs and provide satirical commentary on the goings-on in the world at large.

‘South Park’ follows the many adventures and misdemeanors of four warmly-dressed schoolboys who live in the fictional town of South Park, Colorado. Eric Cartman, Stan Marsh, Kyle Broflovski, and Kenny McCormick are often up to no good and their various rather inappropriate antics make for hilarious TV. Now as viewers await the start of Season 24, ‘South Park’ returns with a one-hour long special episode titled “Pandemic Special”. If you’re curious to know where you can stream ‘South Park: Pandemic Special’, you’ve come to the right place as we’ve got all the info. First, let’s give you some background on the special episode.

What is South Park: Pandemic Special All About?

The pandemic special episode promises good fun and many laughs as it depicts the residents of South Park dealing with the ongoing Coronavirus pandemic in their own way. The kids return to school after a long home quarantine, only to find that the “new normal” is completely different than what they are used to. Predictably, Eric Cartman takes issue with going back to school and declares himself out, citing necessary social distancing as his reason this time. The other kids have to sit a few feet apart, on desks fitted with plexiglass, and classes are now taught by policemen. Elsewhere, Stan’s weirdo of a father, Randy Marsh, comes up with his own “pandemic special” and capitalizes on the opportunity to expand his ‘Tegridy Farms’ business (growing marijuana). Being the laugh riot that it usually is, we are sure ‘South Park’ will give the 2020 pandemic crisis a spin of its own and will have you in splits in no time. Here are all the details on where you can stream the pandemic special episode of ‘South Park’.

Unfortunately, ‘South Park: Pandemic Special’ is not available to stream on Netflix. However, you can watch similar animated sitcoms on Netflix that are known for their irreverent humor, like ‘Big Mouth‘, ‘BoJack Horseman‘, or ‘Hoops‘. Netflix has a host of animated comedy series that, like ‘South Park’, bring the laughs through humor that can be considered “controversial” and “offensive”.

The pandemic special episode of ‘South Park’ will not be released on Hulu.

How To Watch South Park: Pandemic Special For Free?

SlingTV and fuboTV both offer a 3-day free trial so you can sign up on either live TV streaming app to watch Comedy Central for free, thus catching the pandemic special episode as it airs on Wednesday, September 30, 2020, at 8 pm ET/ 7 pm CT.