Where Was Cherry Filmed?

Based on the eponymous novel by Nico Walker, ‘Cherry’ is a crime drama film that stars Tom Holland as a young man, Cherry, who quits college to join the army as a medic. Cherry serves in Iraq and returns home as a war hero, but unfortunately, he has to live with PTSD. His symptoms soon become worse, and Cherry spirals into drug addiction, ruining his relationship with Emily, his true love. To support his opioid addiction, Cherry eventually starts robbing banks.

Directed by Anthony and Joe Russo, the crime drama film is a captivating story of love, drugs, and crime that can keep anyone hooked to the very end. The realistic scenes of war in the middle east and bank robberies can make any movie aficionado curious about the filming location of ‘Cherry’. If you, too, are one of those people, we have got you covered.

‘Cherry’ was filmed primarily in Ohio and a few other locations in the middle east. The movie captures different life situations of a very complex character, so it is understandable that it had to be filmed at multiple unrelated locations around the world. After a few delays due to proposed changes in tax in Cleveland (the home state of the Russo brothers), the production team began filming in October 2019 and concluded it on January 20, 2020. We dug deeper to get more details about the specific filming locations. Here’s everything you need to know.

The movie was filmed mostly in Cleveland, Ohio. The lead actor, Tom Holland, was spotted in Cleveland’s Gordon Square neighborhood in November 2019. On Detroit Avenue, some scenes were filmed inside the Subway, after which Holland was seen hurrying outside for some exterior shots. In the morning, the crew had shot several scenes inside the Pioneer Savings Bank, where they probably filmed one of the robberies. Some important shots were also taken at Case Western Reserve University, the top-ranked private research university in Cleveland. 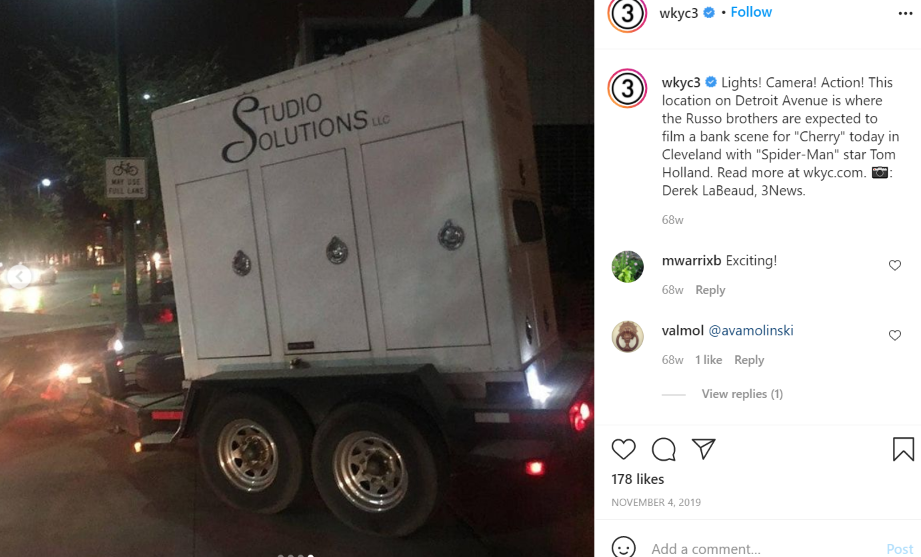 Although Cleveland is an important shooting location, the filming was not limited to it. In Lorain, filming for ‘Cherry’ was done at Broadway Avenue and on East 20th Street (just east of Broadway). In Marion, prison scenes were filmed at the North Central Correctional Complex in Marion County, a high-security prison for men. The crew also filmed a few scenes in Bedford, at St. Peter Chanel High School, before it was demolished. The Russo brothers even tweeted about it being the high school where their father obtained his education.

Morocco was also one of many filming locations for ‘Cherry’. The North African country has a long history of filmmaking which goes back to the late 1890s when ‘Le chevrier Marocain’ was filmed in 1897 by Louis Lumière. Movies like ‘Mission: Impossible – Rogue Nation’, ‘American Sniper’, ‘Inception’, and ‘Sex and the City 2’ have shot several important scenes at this location. The crew of ‘Cherry’ was spotted having a great time while shooting in Morocco.

🐫Hump Day🐫 The #Cherry crew had some fun while shooting in Morocco. On a scale of 1 to Joe Russo taking a selfie with a camel, how’s your Wednesday going? pic.twitter.com/xPxGwfvmtY

Interestingly ‘Cherry’ was also filmed in AlUla, in northwestern Saudi Arabia. Located 300 km north of Medina, AlUla is not known for filmmaking but is regarded as a hidden treasure owing to the wide-ranging cultural, historical, and adventurous experiences it provides. Therefore, it is no wonder that the ancient walled-city was used for shooting several scenes for ‘Cherry’.