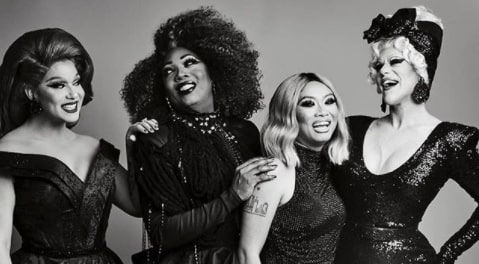 TLC’s ‘Dragnificent!’ features the ex-contestants of ‘RuPaul’s Drag Race.’ Alexis Michelle, Bebe Zahara Benet, Thorgy Thor, and Jujubee are all set to glam up those in dire need of a makeover. The drag culture has re-envisioned the game of aesthetics and beauty. Ranging from professional models, singers, makeup artists, to dancers, they have spread their wings and magic to every possible domain. ‘RuPaul’s Drag Race’ enabled the queens to get their platform to fame. Nothing short of legendary, the alumnus from the show aims to help those who struggle to see themselves as beautiful.

Drag fashion and their entry into the world of normative fashion designing and makeup saw a steady pace in the past decade. The drag queens re-envisioned this space. They have the necessary experience from designing their own fashion couture and makeup in the many events they take part in. This was followed by an increase in their makeup tutorials and fashion tips. In more ways than one, they have embodied everything fashion as a means to express themselves further. Hence, the fundamental notion behind a show like ‘Dragnificent!’ makes absolute sense as it seeks to enable others to find themselves through their makeovers.

Being a reality TV show, the four seems to have scoured across different locations with their subjects of makeovers. Most of the shooting seems to have been done in New York in addition to other prime locations.

The main center of the show’s filming seems to have happened in the heart of New York. The bustling city of New York is known for its unique status in the world of fashion. Named as the fashion capital of the world, it has set itself apart. Behind the screen, New York has the most number of creative impetus, retailers, and headquarters of major fashion designer brands. The show, too, must have chosen this destination for the culture of fashion it embodies.

The makeover sessions which are inclusive of bridal makeovers require some shopping and high-end destinations. One of the locations used was the Langham Huntington, Pasadena, in Los Angeles. The original hotel is believed to have been built by Marshall C Wentworth. However, the reconstructed version of the building was built in 1991. The iconic site has been used as the filming location of popular films like ‘Beverly Hills Chihuahua’ and ‘Charlie Wilson’s War.’ The exterior of the hotel was even used in ‘Westworld.’

It seems like this wedding destination was used to film the show’s classic makeover saga. Their highlander pavilion is often used as venues for golf outings, weddings, and such occasions. This doesn’t seem surprising as the star drag queens could have had an ultimate blast here filming the wedding of one of their proteges.

Read More: Where Was Balthazar Filmed?