Where Was Firefly Lane Filmed?

Netflix’s ‘Firefly Lane’ delineates the trajectory of the friendship between two women Kate (Sarah Chalke) and Tully (Katherine Heigl). Their inseparable bond goes thirty years back to when they were young girls, and since then, it has survived trials, trauma, and tragedy. But at some point during womanhood, they are unexpectedly set apart by a sudden twist of fate. The story starts when the pair become neighbors as young girls. Through shared experiences and drama, they create another world for themselves in Firefly Lane. So, where does the filming of ‘Firefly Lane’ take place? Let’s have a look!

Principal photography for ‘Firefly Lane’ began on September 17, 2019, and came to an end on January 21, 2020. The show is extensively shot in British Columbia, especially in Vancouver and Burnaby. Here are the specific details!

Vancouver is commercially a crowded seaport in British Columbia but is affectionately known for housing a diverse culture of different ethnicities. It is engulfed by mountains surrounding a unique plethora of art, theatre, and music, which provides an unyielding aesthetic to the place. Hence, it is a favored spot for major productions, including ‘Firefly Lane’, which is shot there. The production team spread out in Downtown Vancouver, preferred for its vibrant night-life lined with bars and clubs.

The interior scenes of the show were filmed in The Ironworks studio, located at 235 Alexander Street, also known for hosting annual festivals and art exhibitions. Actors Brendan Taylor, who plays Mutt, posted a picture in Imperial Vancouver, situated at 319 Main Street, wherein he seems to be enjoying a swell evening with Sarah Chalke.

Filming also took place at Homer Street and Nelson Street. On November 12, 2019, the production team occupied the east side of 700 Hamilton Street, where more scenes were shot. A crew member Vincent de Paula described bits of the filming process through pictures posted on social media. The period portions of the show were flared up using several filters that enhanced the appeal of the shots. The team filmed a few scenes at night, which mostly comprise hazy street views. A picture was posted by Vincent depicting the same. 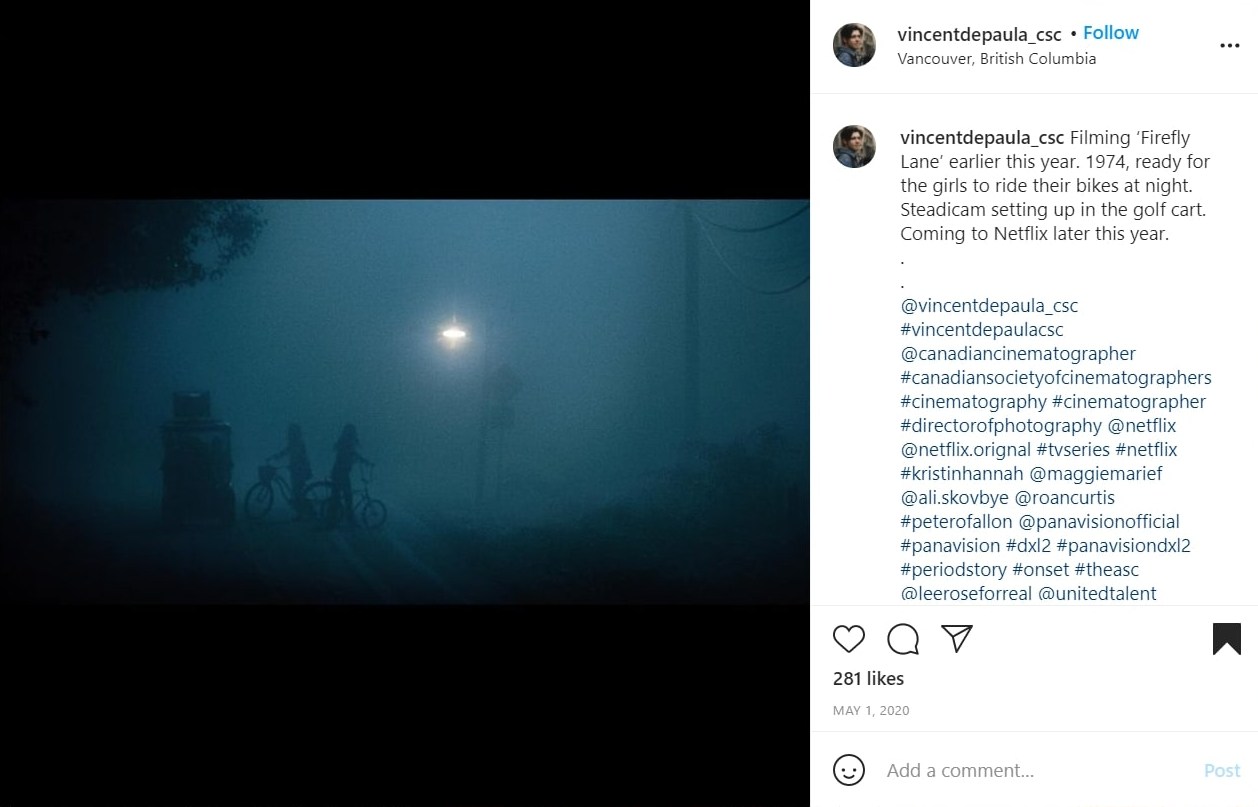 Located towards the east of Vancouver, Burnaby is a city in British Columbia and is also a part of Metro Vancouver. It is credited for housing many industrial and commercial firms, yet it is preferred because of its impeccable sprawl of parklands, schools, lakes, and mountains. Burnaby has been chosen as one of the filming locations for ‘Firefly Lane’ as it is a perfect reflection of British Columbia’s scenic and natural openness.

Read More: Is Firefly Lane Based on a True Story?