Where Was Interview with the Vampire Filmed?

Directed by Neil Jordan, ‘Interview with the Vampire’ is a horror-drama film that follows an 18th-century lord, Louis, who turns into a bicentennial vampire. Before that, he was mourning the death of his family. However, he bumps into Lestat, who then initiates his transformation into a vampire. This Tom Cruise and Brad Pitt-starrer is an interesting tale that takes place in Spanish Louisiana, now a central part of North America. It is an adaptation of Anne Rice’s novel of the same name. Set in the year 1791, the movie uses old-fashioned setups that pique our curiosity. If you’re wondering where this film was shot, you’ve come to the right place!

Interview with the Vampire Filming Locations

‘Interview with the Vampire’ was shot over multiple locations, including the USA, England, and France. There was a lot of work involved in the filming process, which ultimately lasted for about five months. Principal photography for the film reportedly commenced on October 18, 1993, and ended on March 15, 1994. Now, let’s take a look at more details!

The movie was predominantly shot in New Orleans and other areas in Louisiana. To realize their vision of an18th and early 19th-century New Orleans, the team shot in the French Quarter of New Orleans and a purpose-built waterfront set along the Mississippi River. All the interior shots of the townhouse in the movie were modeled according to Dante Ferretti’s idea and skill. A few scenes were shot at the Lafayette Cemetery No. 1 situated at 1400 Washington Avenue.

Louis’ plantation was designed as a combination of primarily the Destrehan Plantation and Oak Alley Plantation. The former is a mansion in Destrehan, while the latter is a property located at 3645 Highway 18 in Vacherie. Other places in Louisiana that feature in the film are Shreveport and Laurel Valley in Thibodaux.

A few scenes were shot in San Francisco, particularly in and around the Golden Gate Bridge. The exterior of Louis’ hotel was filmed at the intersection of Taylor Street, Market Street, and Golden Gate Avenue. A few scenes in the movie were shot at Golden Gate Avenue, which is an important part of the transportation junction of San Francisco. The site of the interview, St. Martin Hotel, is actually Show Dogs Fine Sausages. It seems that the hot dog joint located at 1020 Market Street has now closed down permanently.

Apart from New Orleans, London is another significant filming location for ‘Interview with the Vampire’. Interestingly, St Paul’s Church, situated at Deptford High Street in Deptford, was used to depict the interiors of the New Orleans church in the film. The production team also went to Whitechapel, a district in East London, to film a few scenes. Wilton’s Music Hall, a popular performing arts theater located at Ensign Street in the same district, serves as another filming site.

Interview with the Vampire: behind the scenes with mechanical designer Jon Dawe, assembling the eye mechanisms of the animatronic Lestat puppet head, created by Stan Winston Studio for the 1994 film. pic.twitter.com/iXRJYsrYxf

Speaking of the experiences during filming, Brad Pitt admitted that he was “miserable” to the extent that he tried to dissolve the contract at one point. He remembered that time as, “Six months in the f—ing dark,” owing to the harrowing night-time shoots that took place in the wintertime. Another location in the UK that features in the movie is Marble Hill Park in Richmond, debatably located in London. 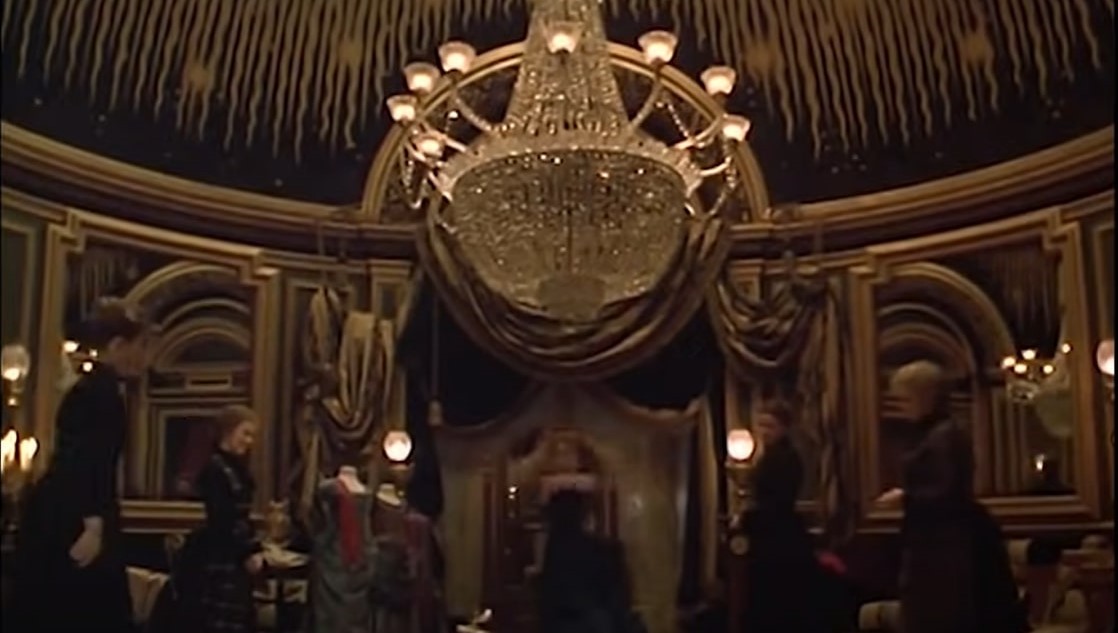 The interiors of the Theatre of the Vampires is a revamped version of the Albert R. Broccoli 007 Stage located at Pinewood Studios in Iver Heath. It is a British film and television studio situated on Pinewood Road, more than 18 miles west of central London. The studio is credited for housing several productions over the years. The sets were designed by Dante Ferretti, who did a tremendous job of redecorating the stage.

The City of Love serves as a background to a couple of scenes in the movie. The exterior and lobby of the Opéra National de Paris Palais Garnier were used to capture Louis and Claudia’s arrival at their hotel in Paris. It is an opera house located at 8 rue Scribe, Paris 9. Considered to be a brilliant example of 19th-century theater art architecture, it is appreciated by art connoisseurs and tourists alike. Other parts of the film were shot at Palais-Royal. It is a former royal palace situated at the Place du Palais-Royal, Paris 1. Another location that features in the movie is the Rue de Rivoli, which is a street in Paris 1.