Here Are All The Locations Where ‘Sex Education’ Was Shot

Netflix’s ‘Sex Education‘ is what every high-school film fan’s dreams are made of. For obvious reasons, the series blew up as soon as it released last year, becoming a raging success both critically and commercially. It has tonnes and tonnes sex, of all kinds, but especially the awkward kind. Then, of course, there are all the heart-melting moments that made us cry those happy-sad tears. ‘Sex Education’ explores growing up and figuring out one’s sexuality brilliantly well. But it also portrays friendship, love, bullying, parenting in a delicate and fun way.

‘Sex Education’  has an incredible, nostalgia-inducing, mixtape worthy, soundtrack that has songs from the 80s and 90s by bands like The Cure and The Psychedelic Furs, and of course, the unforgettable music by Ezra Furman. Visually and aesthetically too, the series has a peppy American high-school vibe with a mid-Atlantic tone from the 80s that immediately takes you back to the John Hughes classics. But these are a bunch of English high-school kids with smartphones.

The setting of ‘Sex Education’ always raises confusion as it is difficult to place it in a particular space and time. This is also where its charm lies as it is both nostalgic and new. So, where exactly is ‘Sex Education’ set and where is it filmed? We have all the answers.

Where Was Sex Education Filmed?

The 80s American vibe of ‘Sex Education’ is neither a coincidence nor a mistake. In fact, writer Laurie Nunn spoke of the fact that the series is a tribute to the John Hughes classics like ‘The Breakfast Club and ‘Pretty in Pink’. Producer Jamie Campbell also went on to say that the series aims to be more “aspirational” and less like how English schools are typically portrayed. This is why we have lockers and banners and varsity jackets with the jocks playing American football. But the series is actually both set in South Wales, and shot on various locations around the area, near River Wye and parts Gloucestershire. Like the first season of ‘Sex Education’, the second season too features these locations.

I am sure all of us at some point, while watching the series, wondered where exactly Moordale High is located. The production team actually took over Caerleon campus in South Wales. It was formerly one of the buildings of University of Wales which closed in 2016 after a merger that formed the University of South Wales. The 32 acres of space where the campus stands once housed around 4,500 students, but has been vacant since 2016. The production transformed the building, with its early 20th century architecture and clock tower, into the main backdrop for ‘Sex Education’ serving as the ideal high-school hybrid.

But certain school locations are not filmed in Caerleon. These include the gym and the swimming pool. For the gym, where we have our school assemblies and dances, the Paget Rooms in Penarth were recreated. This public hall, located in south of Cardiff, usually hosts theatre productions, and was built in the early 20th century. The scenes that are set in the swimming pool where we usually have Jackson practicing, are shot in the Newport International Sports Village complex.

Wye Valley and Forest of Dean

Apart from the school, all the key locations in ‘Sex Education’ are filmed around Wye Valley and Forest of Dean on the Welsh border. The establishing aerial shot that introduces the series follows the River Wye and takes us to the gorgeous home of Otis and Jean. 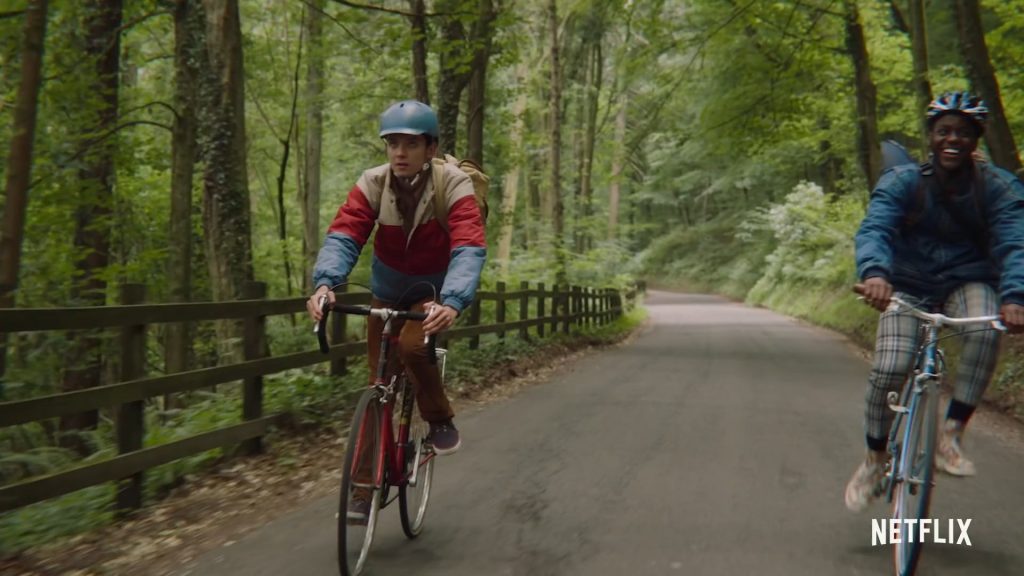 The beautiful red and white house is The Chalet, located in Symonds Yat in Wye Valley, very close to the Gloucestershire border. The house is actually a B&B built in Scandinavian style that overlooks the Wye River. All the other scenes are filmed around the area. The shop where Maeve picks up the important medical equipment is a family store called Brown Stores which was established in 1928.  It is located in Llandogo, south of Symonds Yat.  The caravan park where Maeve lives is near Ross-on-Wye. The bridge through which Otis and Eric ride their bikes to school is the Wireworks Bridge in Tintern. While Bigsweir House in Gloucestershire is the location used for the big party in the first season.

Apart from these, another location that we see particularly in the second season of ‘Sex Education’ is the military school where Adam is sent too. The scenes featuring the school are filmed in Margam Castle, a large Victorian country house in Port Talbot, built in 1840 for Christopher Rice Mansel Talbot.