Which Group Is Myrna Part of In The Outlaws? Is The A38 a Real Political Party? 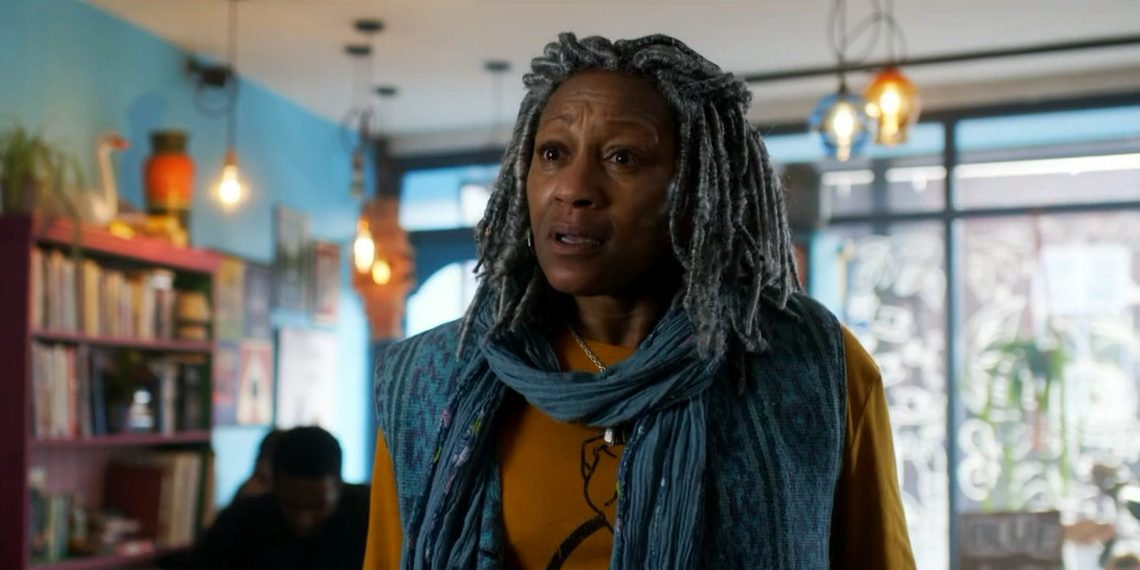 Created by the duo Stephen Merchant and Elgin James, the black comedy series ‘The Outlaws’ comments upon social and gendered inequalities underneath its beguiling comic ambiance. One of the interesting characters in the series is Myrna. At first glance, Myrna comes off as a typical leftist liberal anarchist seeking to voice the oppressed, but as a stereotype, her character is taken to new heights.

She is also lactose intolerant, as she has recently discovered that she may have a bloating problem. As she clashes with the right-wing businessman John, the series creates its comic ambiance from their dynamic. However, you may wonder if Myrna’s political party has existed in real life. In that case, let us probe deeper. SPOILERS AHEAD.

Which Group Is Myrna Part of?

Myrna has been the founder member of the political party A38, but her party has democratically disenfranchised her by employing votes. Myrna’s views are radical — bordering on a paranoia towards capitalism — but ironically, she needs some capital herself to make room for broader campaigns. The third episode revisits the reason behind Myrna’s community payback. While two police officers on a mobile kiosk were asking people to join the force, Myrna attached the cubicle with her SUV, dragging the officers along.

While questions like, “Do you like racially profiling people?” are not altogether irrelevant, the act of anarchy sends her to the force. Myrna stands by her action of dragging the kiosk since she is fed up with mild protests by the road with slogans like “Honk if you hate racists.” She wants to change societal injustice, even at the expense of a peaceful afternoon stroll with Yvonne and her husband. However, we sense her acts of extreme vandalism to have a pattern, while a past incident haunts her.

While she contends that everything is political, she cannot forgive herself for the death of PC Colin Denison owing to her actions. Therefore, while the fiery passion of youth has withered, leaving a scar, the incident has made Myrna a bit milder. While she stands by her political beliefs, she has understood that people are worth more than their political beliefs. Therefore, John is the first person Myrna goes to upon finding the money, and they develop a love-hate relationship in the process. She also becomes a bit more centrist, obtaining a place back in the party utilizing voting.

Is The A38 a Real Political Party?

No, the A38 is not a real political party. The name is possibly derived from the expressway of the same name, parts of which go through Bristol. The expressway is familiar with several terms, such as Devon Expressway and Gloucester Road. While naming things is difficult for Gabby, Myrna probably called her organization to cause the same mark on the ground of England as the highway does.

However, while Myrna’s solo acts of vandalism have marked the organization as a quasi-militant group in the face of the media, its impact is reduced to rubble day by day. However, the United Kingdom had a two-party system, classically known as the Whigs and Tories. While the Tories would generally withhold a right-leaning Republican worldview, the Whigs — or their modern-day incarnation, the Labour Party — are pretty much left-leaning democrats. While the A38 does not exist, it would probably side with the Labour Party if it existed.