Who is Bindi Irwin’s Husband? Is She Pregnant? 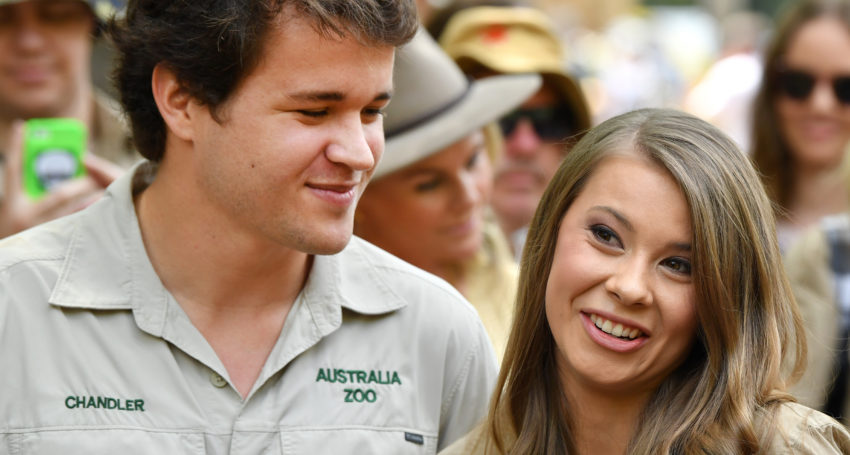 Crocodile Hunter Steve Irwin’s daughter Bindi Irwin is a wildlife conservationist and zoo operator and also a TV personality, just like her late father. Bindi has been in the public eye ever since she was a very little girl, making constant appearances on her daddy’s shows and documentaries. When she was 9, she also hosted her own series for Discovery Kids called “Bindi The Jungle Girl”. Bindi has since released a couple of fitness videos and hosted numerous wildlife documentaries. She has also acted (Free Willy 4) and is the winner of ‘Dancing With The Stars Season 21’.

Bindi currently stars in Animal Planet’s ‘Crikey! It’s The Irwins‘, alongside her mother Terri and brother Robert. The show follows the family as they deal with the various challenges that come with running the Australia Zoo in Queensland. The show ‘Crikey! It’s the Irwins’ also at times features Bindi’s longtime sweetheart and now husband Chandler Powell.

Who is Bindi Irwin’s Husband?

Bindi met Chandler when they were both teenagers in 2013. Chandler, who used to be a professional wakeboarder (which is a water sport) is from Florida. He was visiting Australia for a wakeboarding competition when he decided to go see Australia Zoo, having been a lifelong fan of The Crocodile Hunter. As fate would have it, Bindi was Chandler’s tour guide at the zoo that day and he was immediately smitten. He tried an old school approach, so as to not come off as creepy, and made his brother ask Bindi if she would be interested in hearing from him. Since they had hit it off right away, Bindi said yes. But Chandler, before he started writing to Bindi directly, first wrote to her mother asking permission to get in touch with her.

Bindi and Chandler then embarked on a long-distance relationship which they made public in 2015 when Bindi was a contestant on ‘Dancing With The Stars Season 21’. Their long-distance romance continued until 2018 when Chandler decided to give up his wakeboarding career and move to Australia to be with Bindi and the Irwin family.

Bindi and Chandler got married in March 2020 at ages 22 and 24 respectively. They tied the knot in the gardens of Australia Zoo in a small private ceremony, in view of the Coronavirus pandemic. Ever since then, due to the lockdown, the newly-weds have immersed themselves in helping out at the zoo. They both admit that their’s is probably the weirdest honeymoon in the history of honeymoons, spent mostly cleaning up after the zoo animals.

On August 11, 2020 (five months after their barnyard zoo wedding), Bindi and Chandler announced that they are expecting their first baby, due in 2021. Bindi said in her social media post that she wanted to share the happy news with her fans and well-wishers even though it’s still early and she’s only in her first trimester.

Both Chandler and Bindi are super excited about this next milestone of their life and Chandler believes that Bindi would make a great mom. The family is very happy as well. Bindi’s mom Terri said in her Twitter announcement that Steve would be so proud, were he alive to witness this moment in their daughter’s life.

Steve Irwin tragically passed away from being pierced in the heart by a stingray barb in 2006 (when Bindi was only 8). But Bindi has always maintained that were he alive, Steve would have adored Chandler, seeing as how Chandler is a very kind person and genuinely invested in wildlife conservation like her.

Well, Bindi and Chandler seem like they were just meant to be together and will make really good and kind parents. We wish them the best for this exciting new chapter in their lives.