Who is Robin Roberts Dating?

Robin Roberts is a renowned American television broadcaster who had humble beginnings as a sports reporter, which fetched her the opportunity to work with ESPN for 15 years. The ‘Good Morning America’ host has had an illustrious walk of life despite battling severe health complications. Her two-time fight with cancer led to several chemotherapies and radiation treatments, yet, it could not batter her spirit. She received a 2012 Peabody Award attributing to her decision to publicly showcase her fight with myelodysplastic syndrome (MDS), a rare bone marrow disease, which resulted in a 1,800 % spike in donors.

The Emmy Award-winner’s informal training in basketball and tennis helped her kick-start a career as a sportscaster in 1983. In over ten years (1995), Roberts began to work for ABC News, and in another 10, her hard work and sheer dedication earned her the position of GMA’s co-anchor. As a team, her and George Stephanopoulos’ impeccable coverage made it the top-rated show in 2012. Undoubtedly, the award-winning presenter has witnessed some sharp highs and steep lows. But her girlfriend has remained her one constant, and here is everything we know about their heart-melting journey!

Robin Roberts was born in Alabama but raised in Mississippi, where she attained her basic education in Pass Christian High School. She seems to derive her invincibility from her father, Lawrence Edward Roberts Sr., a pilot with the Tuskegee Airmen and a colonel in the US Air Force. The television personality with her three siblings, Lawrence E. Roberts II, Sally-Ann Roberts, and Dorothy Roberts McEwen Ricketts, were brought up in a stable household.

Her parents were married for 57-long-years until her father died of a heart attack just before he had turned 82 in 2004. Unfortunately, Roberts’ mother, Lucimarian Tolliver, passed away at the age of 88 in 2012, and the family has remained mum about the cause of her death.

For most people, blind dates turn into a complete disaster but luckily for Robin Roberts, it crossed her paths with the love of her life. She met Amber Laign in 2005 after both had twice canceled their plans to meet, but as they say – third time’s a charm! They hit it off instantly and have been pretty inseparable ever since. In a tell-all memoir, ‘Everybody’s Got Something,’ the ‘GMA’ anchor-turned-author spilled the beans on the love of her life. 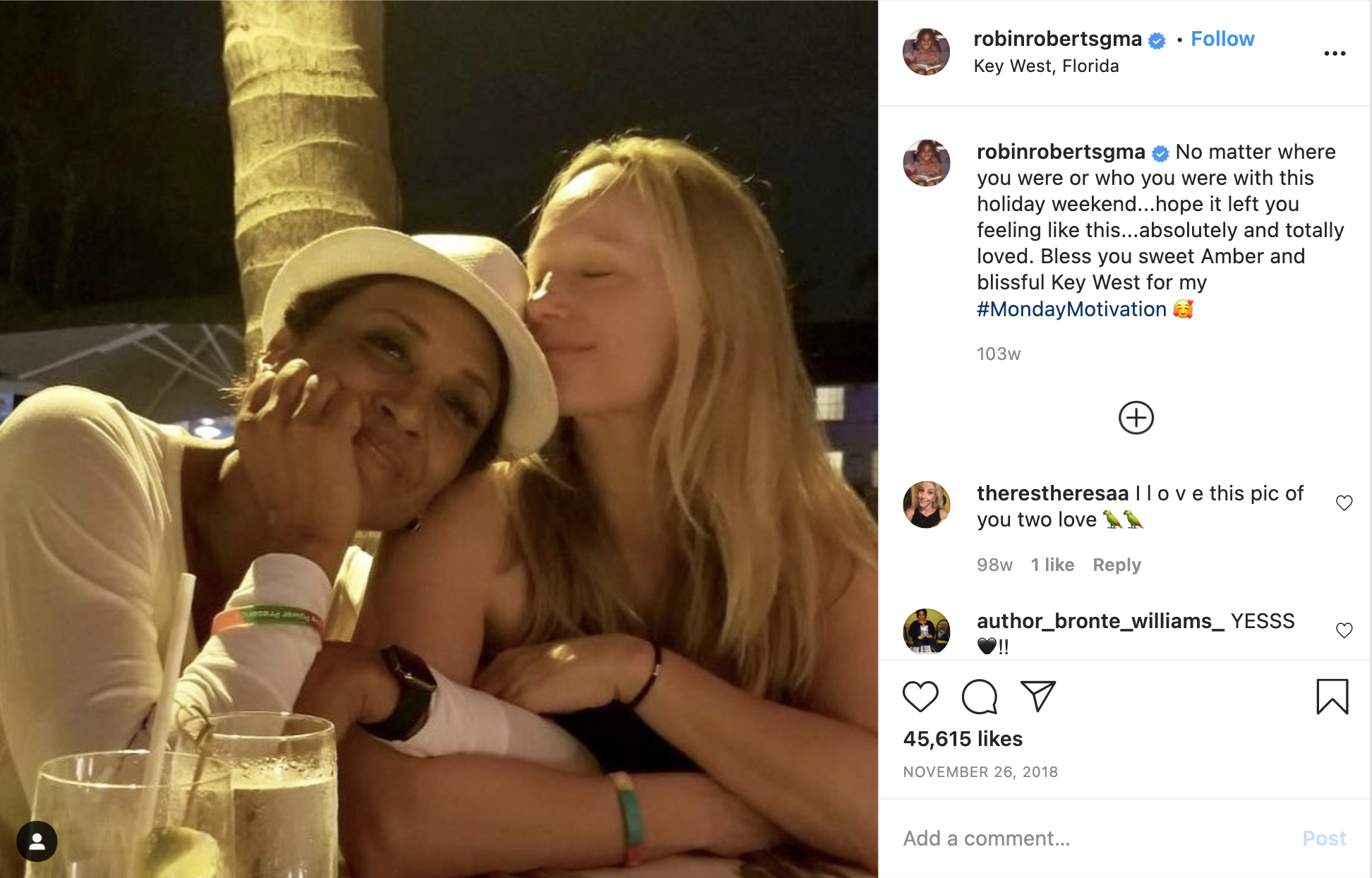 She said, “I liked the fact that she had no idea who I was. She rarely followed sports, so she never saw me on ESPN … and her office mates at the time watched a different morning show.” Roberts could only talk about her feelings for her girlfriend in 2014, after having dated for nearly a decade. In the same interview, she also mentioned how Amber’s utmost care during her battle with cancer won her heart, and she felt almost guilty to not thank her for and did so in a heartfelt Facebook post. 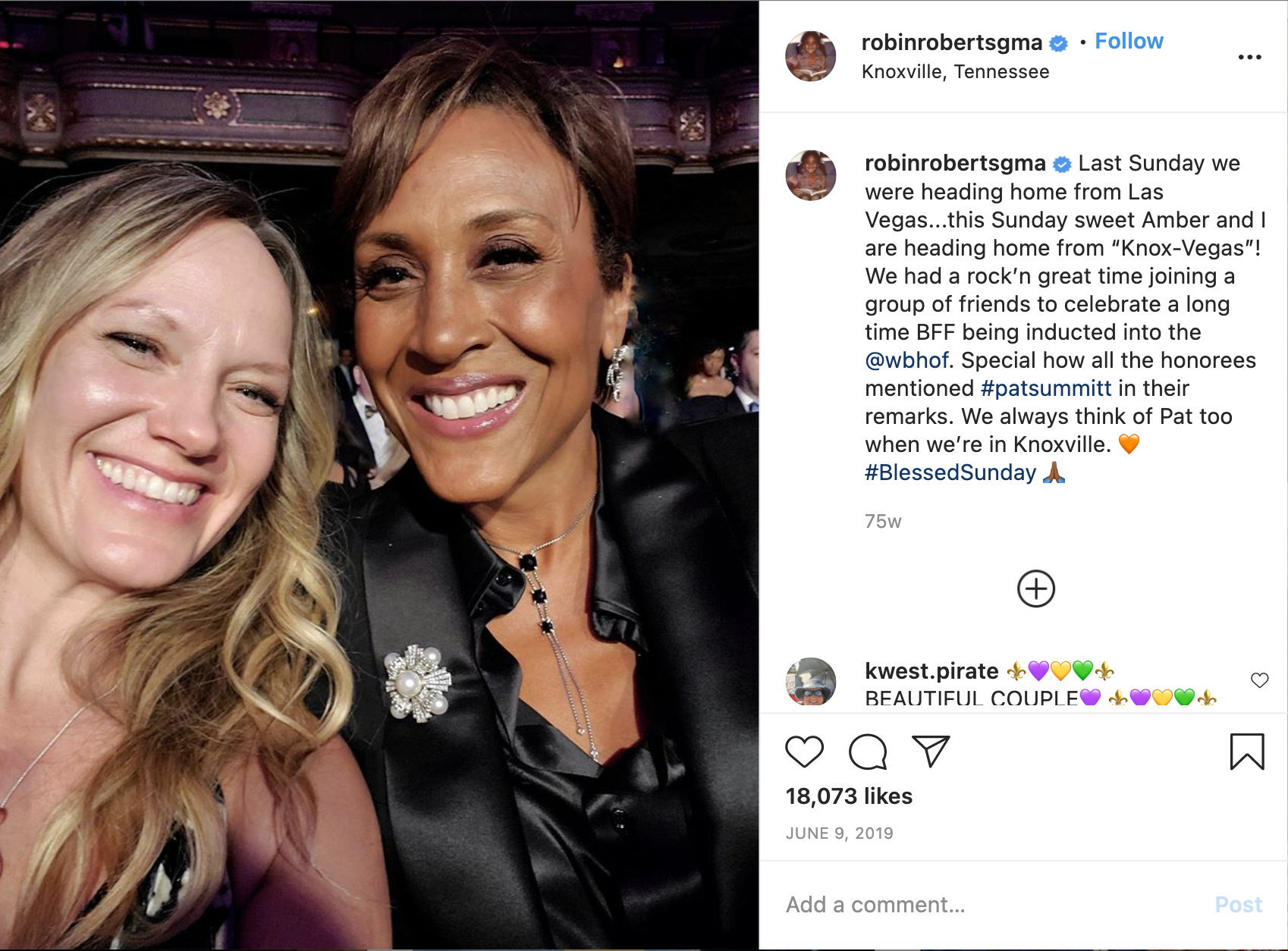 Only in late 2013 had Roberts been able to come out of the closet, but since then, she has left no stone unturned to tell the world how dear Amber is to her. On ‘The Ellen DeGeneres Show,’ she explained how her beau had been with her every step of the way, even after being diagnosed with Breast Cancer. But Amber’s coy demeanor restraints her from stepping into the spotlight.

Often addressed as “Sweet Amber” on Roberts’ social media posts, she is a licensed massage therapist, and the co-founder of the CBD and essential oils brand Plant Juice Oils. The adorable couple celebrated their 15 years of togetherness in 2020, and not that it needed any confirmation, announced to the world that their relationship is stronger than ever!

Read More: Is Savannah Guthrie Married? Does She Have Children?