Who Were Robert Hawkins’ Victims? Why Did He Kill People? How Did He Die?

Investigation Discovery’s ‘Evil Lives Here: Something Is Different About Robbie’ covers one of the deadliest incidents of a mass shooting in Nebraska when a teen opened fire in front of a Von Maur department store in Omaha in December 2007. The mass shooter had a long history of mental illness which allegedly played a role in his resorting to such carnage, triggered by a couple of recent events. If you are interested to know about the victims of Robert as well as how he took his life, we’ve your back. Let’s just begin then.

Who Were Robert Hawkins’ Victims?

On December 5, 2007, the state of Nebraska witnessed one of the deadliest mass murders in its history when a teen assailant fired a semiautomatic assault rifle in front of the Von Maur department store at Westroads Mall in Omaha, Nebraska. The shooting took place at around 1:43–1:49 pm and resulted in the death of 8 people and a further 4 individuals were wounded. The 8 victims of the mindless carnage were: 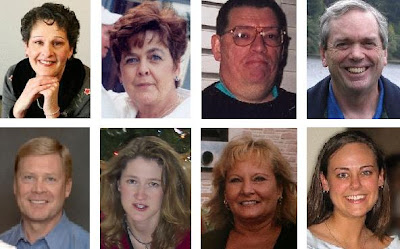 Beverly Flynn, 47, was employed at the Von Maur store in the capacity of a gift wrapper. She also joined NP Dodge Co. as a real estate agent in 2006 and always planted a rose bush in every house she sold. She was shot in the chest and died at the Creighton University Medical Center. Janet Jorgensen, 66, was a friendly and outgoing individual who had been a long-time employee at Von Maur’s gift department. Cherished by customers and co-workers alike, she is mourned by her friends, husband, 3 children, and 8 grandchildren.

Gary Joy, 56, was an amateur writer who loved penning stories and poems at his leisure. He was a devoted son to his 91-year-old mother, Inez Joy, and had died even before he could be rushed to the hospital. John McDonald, 65, from Council Bluffs, Iowa, was a music buff, strummed on his guitar, and excelled at playing bridge. He, along with his wife, Kathy McDonald, was getting Christmas gifts packed at the Von Maur department store when the shooting happened. They tried to hide behind a chair, but he got shot and died on the spot.

Gary Scharf, 48, from Lincoln, was referred to as “Dudley-do-right” by his former wife, Kim Scharf, for his unflinching loyalty and honorable nature. He was returning home from a business trip and had stooped at the Von Maur store when he got shot. Angie Schuster, 36, had been employed in the girls’ department at Von Maur for over a decade and was at the time a manager. The store was near the 3rd-floor elevator and the police and family members theorized that she might have been one of the first people to get shot.

Dianne Trent, 53, was a store manager and her neighbor described her as a very sweet and incredible person. She loved to tend to her flowers after returning home from work but was an unfortunate victim of the mass shooting. Maggie Webb, 24, who was recently transferred to the Von Maur store in Omaha from Chicago, was the youngest victim of the shooting. She grew up in Illinois and had a degree in business administration.

Why Did He Kill People?

Robert Arthur Hawkins was born on May 17, 1988, to Ronald Hawkins and Maribel “Molly” Rodriguez in RAF Lakenheath, Suffolk, England. Robert’s parents described him as an intelligent but disturbed child, with Robert being hospitalized for persistent violent behavior when he was just 4-years-old. His chaotic home life played a significant role in his being diagnosed with posttraumatic stress disorder and attention deficit disorder. When he was 14, Robert was institutionalized for threatening to kill his stepmother, Candace Sims, and thus began his 5-year journey through a maze of juvenile-services programs.

He was also diagnosed with Oppositional Defiant Disorder and unspecified mood disorder later on and this long history of mental disorders resulted in his rejection of his application to enlist in the Army in the summer of 2007. Robert had moved out of his parents’ home in late 2006 and had been living in Bellevue, Omaha. His landlady, Debora Maruca-Kovac, described him as “troubled” and stated that he was depressed after his breakup and getting sacked from McDonald’s in quick succession about a fortnight before the mass shooting.

However, despite getting treatment worth more than $265,000 in various state facilities, Robert’s mental health did not improve much. A deputy county attorney associated with Robert’s case, Sandra K. Markley, said, “I’ve been reviewing his file, and, of course, there is a lot of second-guessing. But there were no indications that he was harmful in this way.” The Director of Children and Family Programs for the Department of Health and Human Services, Todd Landry, also emphasized that “all appropriate services were provided when needed and as long as needed.” The then Omaha Police Chief had said, “It may be impossible to come up with an explanation.”

How Did Robert Hawkins Die?

Robert Hawkins had resorted to killing 8 individuals and wounding 4 more in the process when he opened fire with his semiautomatic assault rifle on December 5, 2007. The 19-year-old then shot himself in the head with the same weapon, claiming his life before he could be arrested. The police had located several suicide notes in his Bellevue apartment addressed to his family.

A couple of them were made public which showed how Robert thought of himself as “a constant disappointment,” urging his family not to miss him and apologizing to them for giving them a difficult time ever since he was a child. He wrote, “Just remember the good times we had together. I love you mommy. I love you dad.” The note ended with, “P.S. I’m really sorry.”