Did Tayshia Adams and Zac Clark Break Up?

After Clare Crawley left with Dale Moss in the middle of ‘The Bachelorette‘ season 16, producers replaced her with Tayshia Adams. It was on the show that Tayshia first met Zac Clark, and together, the two built an excellent relationship, much to the delight of fans. However, with speculations about their sudden breakup now on the rise, fans are anxious to know if the couple is still together. Well, we come bearing answers!

Tayshia and Zac met on the sets of ‘The Bachelorette’ season 16 and immediately hit it off. Although Tayshia was also interested in a few others, those interests began waning after Tayshia and Zac’s first date. The two put on wedding gowns and held a mock wedding photo shoot during their date, after which Zac even opened up about his battle against addiction, making their bond stronger and earning him a rose. 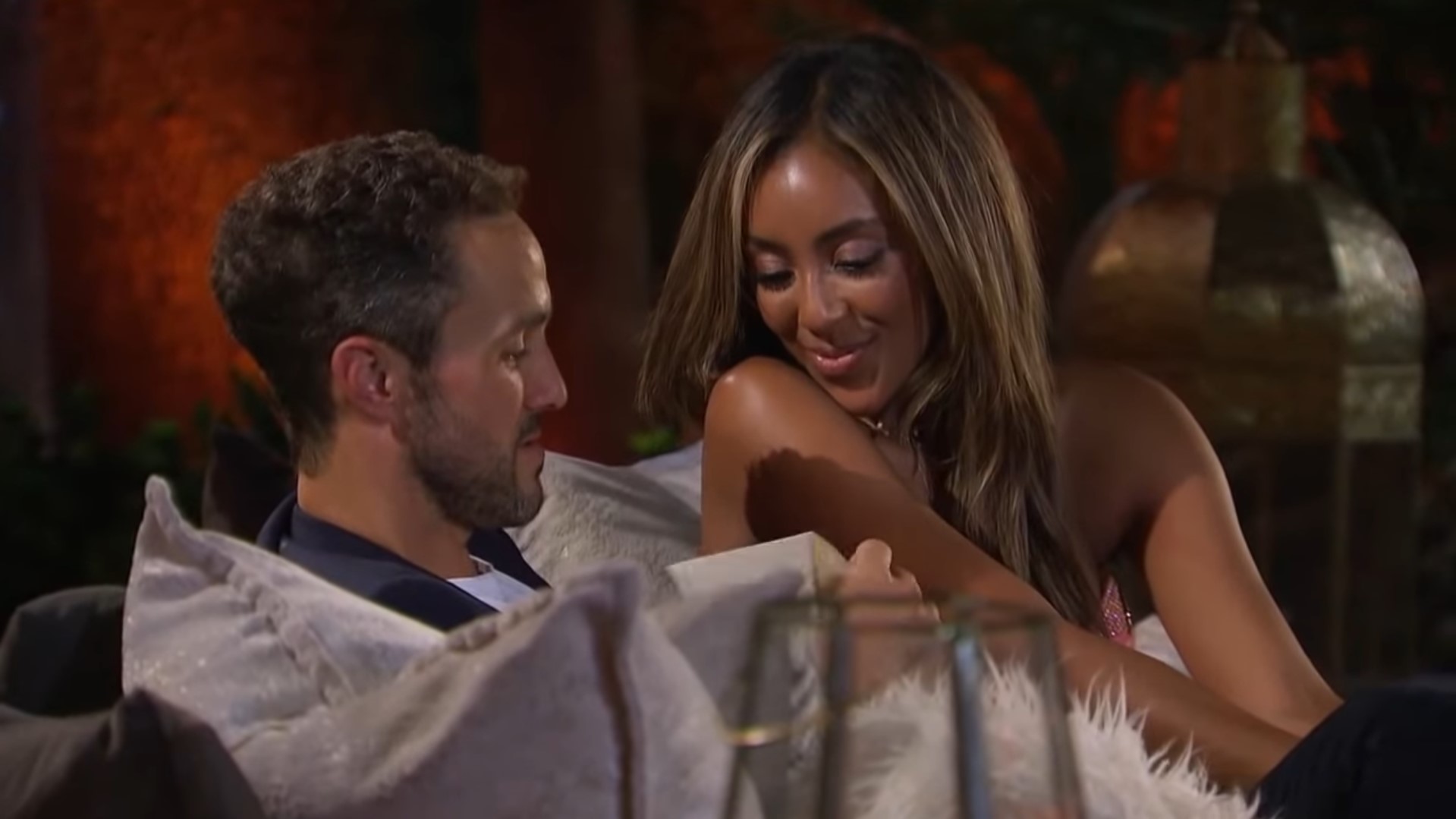 Tayshia and Zac got more and more comfortable with each other throughout the season, and Zac was also on good terms with Tayshia’s family. Moreover, although their hometown date was in danger of getting canceled due to COVID, Zac took Tayshia to a faux-New York City built inside La Quinta, which gave her an idea of how the city is. Ultimately, Zac got down on one knee for his lady love at the end of the season, and Tayshia was only too happy to accept his proposal.

Tayshia and Zac instantly set about building a relationship with each other’s loved ones, and Zac even spent Christmas 2020 with Tayshia’s family. From there on, there was no looking back as their relationship grew stronger in leaps and bounds. In March 2021, Tayshia was spotted without her engagement ring, leading to baseless breakup rumors. 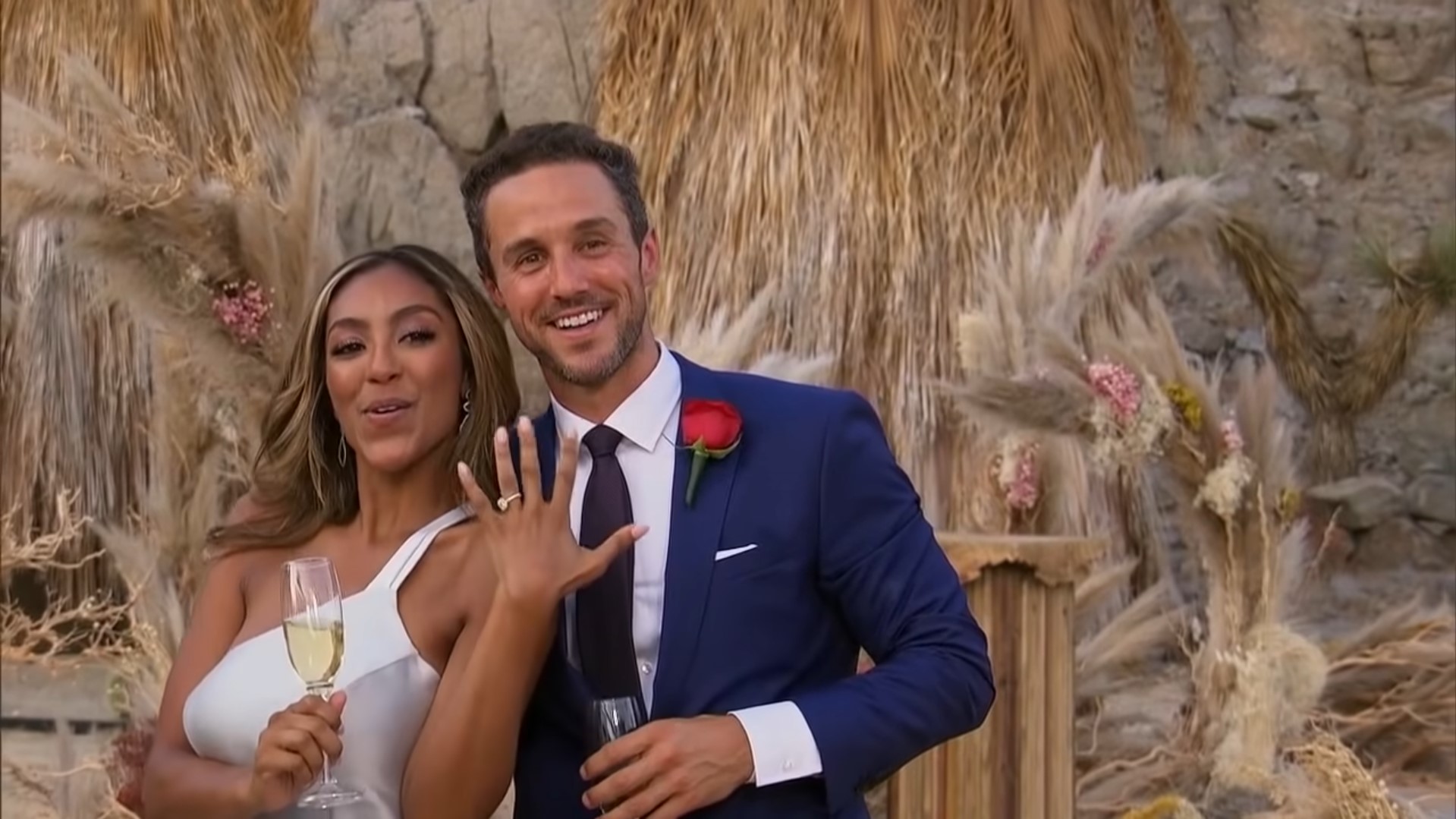 However, Tayshia quickly addressed and shut down such speculations as she explained that she could not wear her ring since it was still getting sized. Following that incident, the pair did not allow further assumptions to come up, as their social media posts spoke volumes about the love and commitment they shared. Moreover, while appearing on a few TV shows and podcasts, Tayshia also mentioned how fantastic her relationship with Zac was.

Although Tayshia and Zac claimed that they were taking it slow and were in no rush to get married, they did seem to be in it for the long run. For the couple’s one-year-anniversary on August 1, 2021, Tayshia took to Instagram and wrote a heartwarming message which read, “At approximately this time 365 days ago, I met you! It’s been a wild ride so far with our lives going a million miles an hour but how lucky are we to have had an amazing week together at the place where it all started AND we were to able to renew our wishes a year later?!”

On the other hand, Zac used his post to wish Tayshia and highlight her accomplishments. In the months following their anniversary, the couple even made their red carpet debut at the 2021 iHeartRadio Music Festival in Las Vegas and filled social media with pictures from their beautiful vacation in France.

Are Tayshia Adams and Zac Clark Still Together?

On November 7, 2021, Tayshia and Zac ran the New York City Marathon as a couple. But more than ten days later, sources claimed that the pair had split and were taking a break. Speculations about their breakup began doing the rounds after fans noticed that Tayshia was not wearing her engagement ring while hosting the ‘Bachelor Happy Hour’ podcast. Moreover, her fiance got fewer mentions on her social media profiles. ‘The Bachelorette’ star even posted a cryptic tweet on November 15, 2021, that just read, “Trust the process.”

According to reports, an inside source claimed that Zac and Tayshia were taking some time apart to figure things out, but the chances of them getting back together were relatively low. However, fans should note that neither Tayshia nor Zac has officially announced their breakup. Furthermore, the reality TV stars still follow each other on social media and have not deleted their pictures together. Thus, with no official confirmation from the couple about their split, it is advisable to take such news with a grain of salt as only time will tell if Zac and Tayshia are still together.