Why Do Great Films Sometimes Flop? 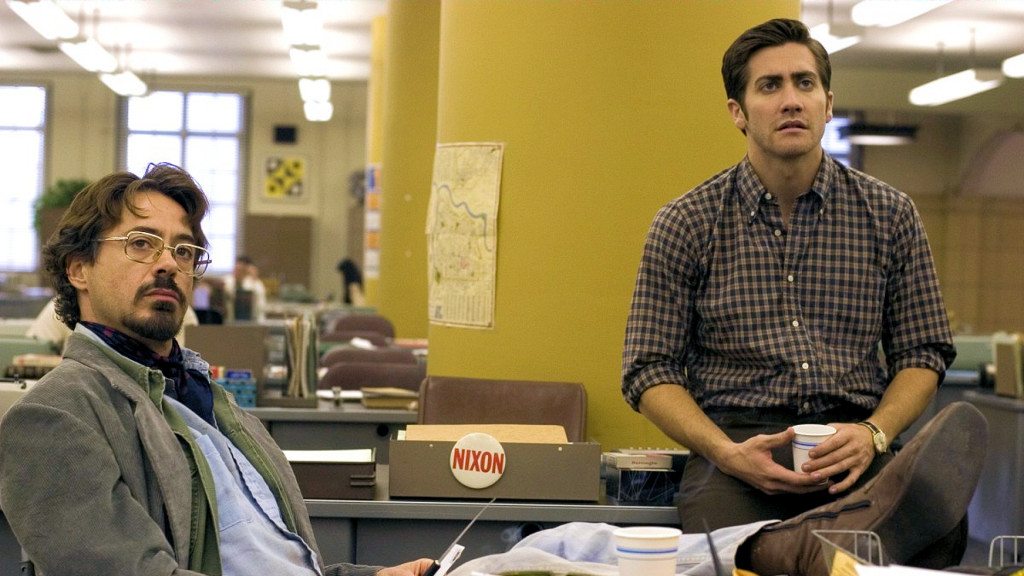 In 1956 John Ford directed a western entitled The Searchers (1956) which opened to solid reviews, but not a great or wide audience. Here was a film in which John Wayne gave his greatest, most daring performance as a racist searching for his niece, kidnapped by a murderous group of Indians who have taken her as their own. He will find the charred remains of his brother and family in the modest home they had created in the wilderness, which ignites his rage, and while searching for the two girls taken, find the raped and mutilated body of the eldest on the way, left as a warning to back off. Yet Ethan Edwards (Wayne) is relentless and continues on, for years searching for his niece who is now a grown woman living among the natives as one of them. Gradually he reveals to his traveling companion Martin (Jeffrey Hunter) he has no intention of bringing Debbie home, he plans to kill her because she has been defiled by the natives.But when face to face with her, with the last of his own blood, he lifts her high over his head as he did when she was a little girl and sweeps her into his massive arms, whispering to her, “Let’s go homer Debbie” and brings her back to the people she knew. Ethan has found the last thing he expected to find, his own humanity.

The Searchers (1956) is often hailed as the greatest western film of all time, the best of John Ford’s career, and the finest performance John Wayne ever gave. No argument from me on any of it. Wayne is superb, towering over the rest of the cast as an obsessed man who will not be stopped from finishing his quest. 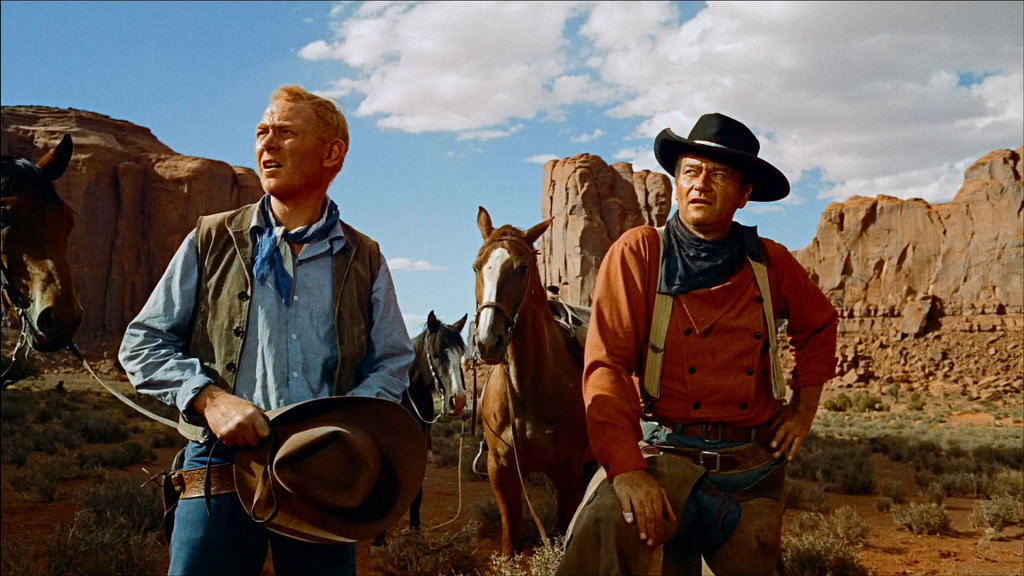 Yet despite the film’s status today, despite being beloved and widely admired when it opened it was sort of swept up into a group as just another John Wayne western when in fact it was the greatest of the John Wayne westerns.

Through history so many great films have opened to middling business, so-so reviews, or rave reviews but no real interest from audiences, only to be discovered in later years and hailed a masterpiece. It might the time of year the film is released, it could be that the critical reaction split audiences and therefore interest, or it could be the advertising campaign was not strong enough. Perhaps the studio dropped the ball in releasing the film, thinking they did not have to do much advertising when in fact it did need just that. It is like William Goldman famously stated, No one knows anything. How do great films fail?? How do they slip through the cracks to be re-discovered in later years ?

The Wizard of Oz (1939) suffered such a fate. The best film of its year, directed by Victor Fleming, who also gave us Gone with the Wind (1939) that same year, the fantasy took audiences over the rainbow on a journey unlike anything they had ever seen before. Yet audiences did not flock to see it. It took years for that to happen, and in fact it was television that finally helped the film achieve the status but has now, as one of the greatest films ever made. Shown each Christmas beginning in 1959 the film became a staple, and is now regarded as a masterpiece. 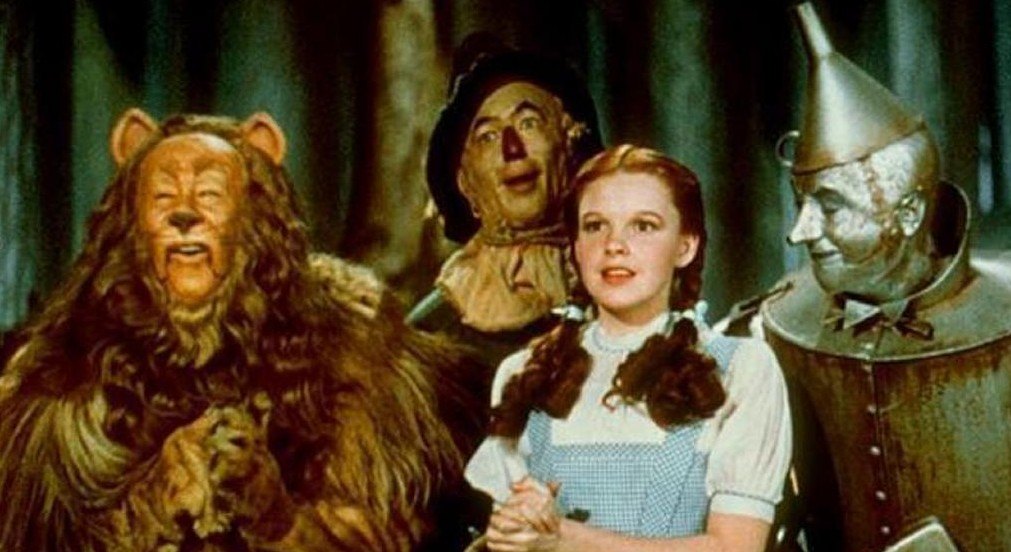 The film adaptation of Hair (1979) opened to rave reviews, absolute raves, but the film could not find an audience. Directed with breathtaking energy by Milos Forman, he plunged audiences back into the sixties, with a film that spoke of peace and happiness, exploring the hippy and drug culture, while never losing the fact it was a commentary on Viet Nam. One of the years best films it was in and out of theaters in two weeks, though found a new life when home video came about. And home video, and later Blu Ray would become the salvation of many a great film that had fallen through the cracks.

Brian De Palma’s masterful Blow Out (1981) had a similar history. A superb thriller with a stand out performance from John Travolta, playing an adult for the first time, a sound man for B movies who records an assassination and then becomes a target himself. Travolta drew comparisons to the young Brando for his work, and De Palma had made the film we had been waiting for him to make. But the studio foolishly released it in the summer, opposite the blockbusters such as Superman II (1981) and Raiders of the Lost Ark (1981) and the film never had a chance. But it did find life on video, and became a cult classic.
Two years later De Palma directed another film that would in time become a masterpiece, but upon release be attacked and ridiculed.

Scarface (1983) ran into trouble with the censors for its violence, and then was attacked by the critics for stereotyping Cubans, and exploiting the violence in the film. In the center of it all was a strong performance from Al Pacino that got lost among the controversy. It was buried and again found life on video, then DVD and is now considered a masterpiece of the decade.

Blade Runner (1982) might be the most famous, or infamous film to find life after the movie theaters, and be helped immeasurably by home video. The film opened to brutal reviews, but audiences at home liked it and kept renting the film. Gradually word got out that this was a film worth a look, and it was a huge renter. Eventually the studio went back and allowed the director to restore what they had asked him to take out, including the narration. The result has been several versions of the film, including the final Directors Cut. 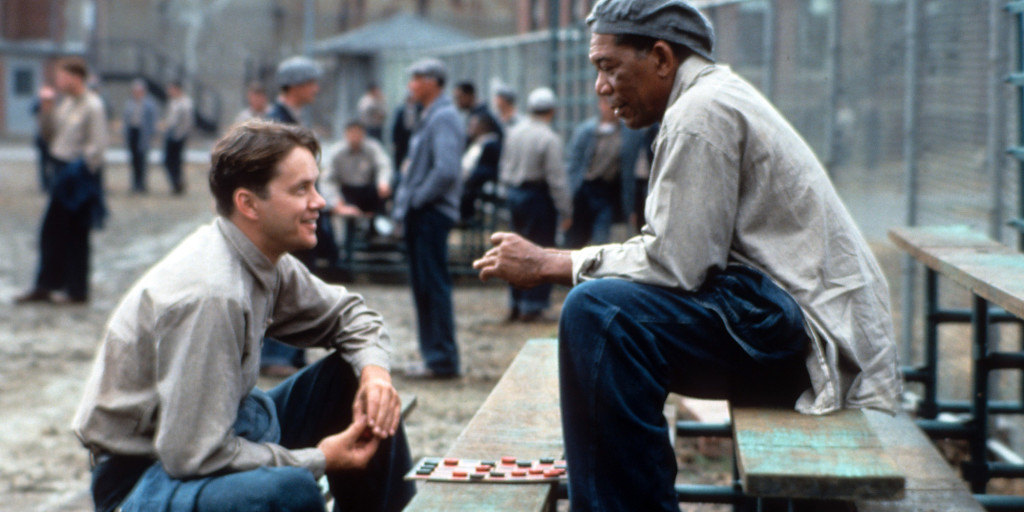 One of the most beloved films of the last twenty five years was dead on arrival at the theaters, which despite rave reviews, no one went, The Shawshank Redemption (1994) was based on a Stephen King short story, directed and written by Frank Darabont, superbly acted by Morgan Freeman and Tim Robbins. Set in a prison during the forties, the film is a metaphor for life, for hope, for never giving up, and the critics went crazy for it. But nobody went. However when the film came out on video later in the year the studio wisely sent a tape to every single member of the Academy, and the picture earned seven Academy Award nominations including Best Picture and Best Actor. Already a massive hit on video, the studio put it back into theaters and it made money and began the road to being one of the most beloved movies of all time.

Among more recent films to suffer failure but then resurrection, have been pictures such as Zodiac (2007) a brilliant work from David Fincher about the hunt for the famous killer in the sixties, bolstered by terrific performances from Robert Downey Jr. and Jake Gyllenhaal. This was a film that was Oscar worthy, that should have been nominated for the top awards, but perhaps because it was released so early in the year, by years end it was forgotten.

Of course the one I have chosen not to discuss is Citizen Kane (1941), but only because I believe it has been covered and there is nothing new I can add to that story. It must be remembered that the Hearst newsgroup, which owned 90% of the newspapers in the United States would not advertise the film, which was a huge disadvantage.

My motto has always been “any film you have not seen is a new film”…so watch for failures, check them out and give them a chance. You might just find a hidden gem that you will never forget.

Read More: The 10 Biggest Hollywood Hits of All Time