Why Does Cornelia Always Wear Gloves in The English? 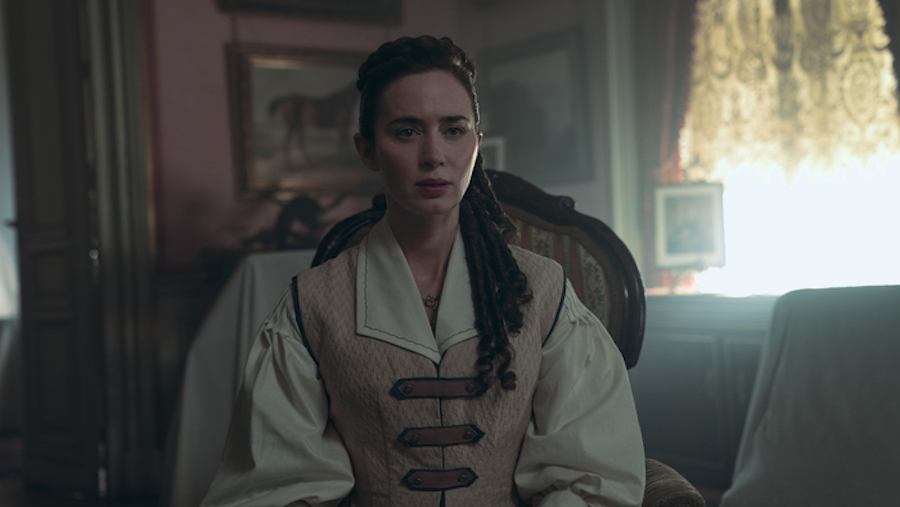 Prime Video’s ‘The English’ follows the story of a woman named Cornelia, who arrives in America with revenge on her mind. The events take place after the death of her son, whom she wants to avenge. The man responsible for it is somewhere in Wyoming, and despite knowing nothing about the new country and the ways of its people, Cornelia doesn’t think twice before jumping into a dangerous situation. To her credit, she never wavers when things get tough, and shows little to no regard for her own life. It’s like she isn’t afraid of death, and the show gives us several hints over the episodes to account for her fearlessness. Her gloves are one of them. If you are wondering why she never takes them off, then allow us to shed some light on the matter. SPOILERS AHEAD

Why Doesn’t Cornelia Take Off Her Gloves?

When we first meet Cornelia, she is impeccably but rather unsuitably dressed for her surroundings. It is clear that she has just arrived from England and is yet to see the real America. Over time, however, she adapts and so does her dress. It is ripped off to make movement more comfortable for her. She’d also come with a lot of baggage, but with time, she learns to let go of the things she wants and keep the ones that she needs. And it looks like her gloves are one of the things that she absolutely needs.

When Eli Whipp asks her why she doesn’t take them off, she says that it is customary for a woman to wear gloves in her country. But it is clear by now that the place she is in doesn’t care for customs, which means that there is another reason behind it. It is in the final episode when Cornelia is taken to a doctor to tend to her wound that she takes off the glove and we discover that she has syphilis. The marks on her hand are similar to the marks that Timothy Flynn and his wife had. Cornelia wants to keep her disease a secret from others, which is why she keeps her gloves on at all times.

Cornelia’s affliction, which she got after David Melmont raped her, also explains a lot of things that seemed minor at the time. In the first episode, when she is held captive by Richard Watts, who’d welcomed her to “the real America”, she knows that he and his men are probably going to rape her before killing her. Before her Deux ex Machina arrives, she considers the possibility that she is going to die. Still, she tells Watts that she is going to kill him. One wonders how she plans to do that if she won’t be alive, but she says that it might not happen that night or the next day, but someday he will die because of her. This is in reference to the fact that he and his men will also get syphilis from her, sealing their fates.

The disease is also the reason why despite being in love with Eli, Cornelia doesn’t allow their intimacy to get more physical than a kiss. She runs away and covers herself in the dirt, hiding the marks on her chest because she doesn’t want Eli to see them. While talking to the doctor about her condition, she also admits that she knows that she is at the stage where the disease will eventually claim her life. This is why, at one point, she tells Eli that she is not afraid of death because she is already dead. The only thing on her mind is to make Melmont pay for what he did to her and her son, who was born with the disease and died because of it. Until that happens, she needs to keep her own worsening condition out of sight and out of mind, which is why she always wears gloves.

Read More: Is The English’s Cornelia Locke Based on a Real Woman?