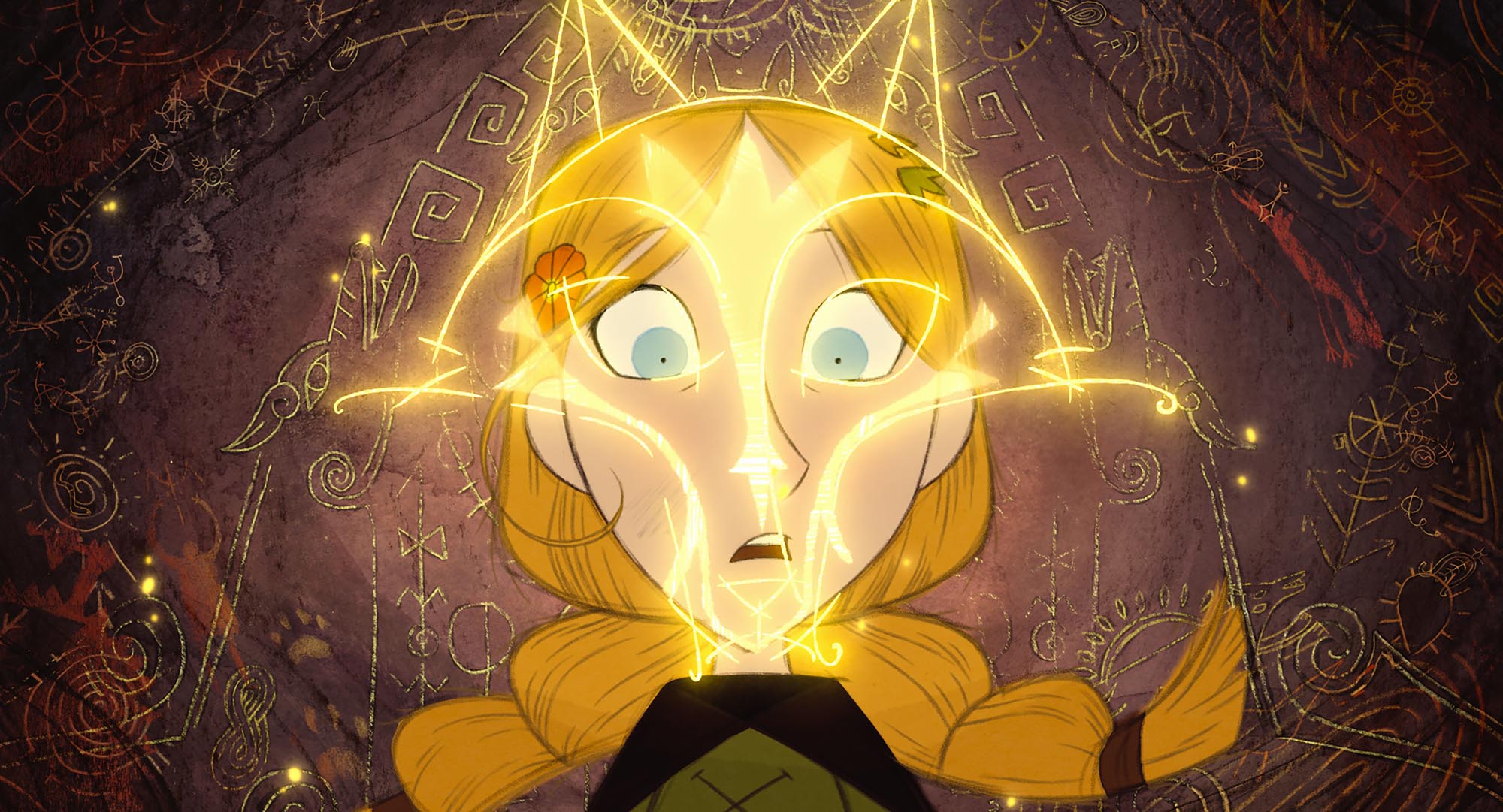 Produced by the criminally underrated Cartoon Saloon Studio, ‘Wolfwalkers’ is not just an animated film. It’s a work of art that echoes its creators’ (codirectors Tomm Moore and Ross Stewart) deep passion for animation and storytelling and pays homage to all things that may have inspired them, from Irish folklore to Monet paintings to old Disney cartoons. The film is unapologetically pagan, embracing pre-Christian themes and then using them to weave an intricate tapestry of tales that is relevant even today. This exquisite piece of cinema, brimming with ancient magic and creatures from Celtic mythology, feels like the third entry in a collection that includes two of Moore’s previous works, ‘The Secret of Kells’ and ‘Song of the Sea’, both of which were nominated for Academy Awards in the Best Animation Feature category. THERE BE SPOILERS. 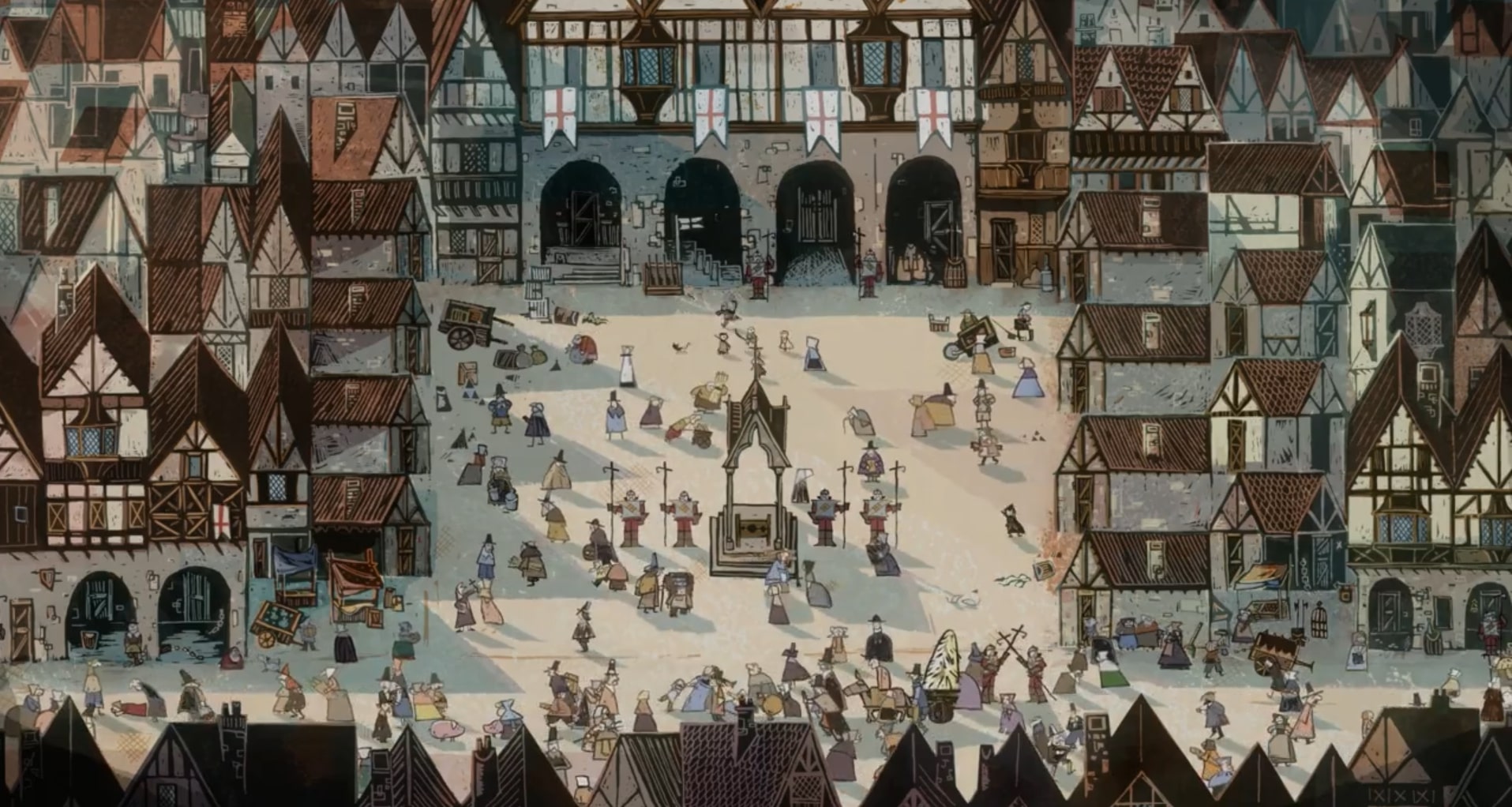 In 1650, expert hunter and trapper Bill Goodfellowe (Sean Bean) moves to Kilkenny, Ireland from England with his daughter Robyn (Honor Kneafsey) to have a fresh start after his wife’s death and is tasked to kill the wolves in the nearby forest by the Lord Protector (Simon McBurney), an Oliver Cromwell stand-in. Bill is quite over-protective of his daughter. In his desperate need to ensure her safety, he keeps her away from his work in the woods, instructing her repeatedly to stay inside the town walls. But Robyn, inquisitive and adventurous as she is, often follows him to the woods with her pet falcon Merlyn, much to his dismay. During one such excursion, her path crosses with that of Mebh Óg MacTíre (Eva Whittaker), who is one of the legendary wolfwalkers, a group of people with the powers to communicate with the wolves and turn into one when they sleep. They can also use the wolves to increase their healing magic.

After the initial hostility, during which Mebh bites Robyn, the girls become fast friends. Robyn promises Mebh that she will help her find her mother, Moll MacTíre (Maria Doyle Kennedy), who has been missing in her wolf form for a long time, although her human body is still at the heart of the magical refuge that they share with the ordinary wolves. Robyn learns that she has become a wolfwalker herself after Mebh bit her, and whenever she is asleep, her own father unknowingly poses a lethal danger to her. The Lord Protector is adamant about clearing out the woods of all the wolves, so it will be safe for the woodcutters to venture there and cut down acres of trees and the farmers and shepherds to raise crops and livestock in its vicinity. Facing all these challenges, the girls must find a way to deal with their respective parental issues while ensuring the survival of the wolf pack.

Towards the end of the film, it is revealed that Moll has been held captive by the Lord Protector all this time. He brings her cage out before the public, hoping to quell their fear of wolves. Likely for the first time in her life, Mebh ventures into the town to see Robyn after the latter doesn’t turn up where they were supposed to meet. What she doesn’t know is that Robyn has made a second promise to her mother, that she will make sure that Mebh and the wolves get out of the forest safely. She frantically tries and fails to get her friend out of the town before she finds out the truth about her mother.

When Mebh sees her mother muzzled and in chains, she becomes the manifestation of the wildness that is coursing through her veins and she rushes towards the stage, not caring about the soldiers with pikes and crossbows. As Bill tries to stop her, Moll bites him, giving Mebh enough time to escape. Later, Robyn frees Moll from her cage and rides towards the forest on her back, ultimately keeping her promise to Mebh. The mother and the daughter reunite, but it is cut short as Bill arrives and shoots a crossbow bolt at Moll in her wolf form. With her spirit back in her body, the crossbow injury appears on her physical self. Mebh tries to heal her, but her magic isn’t enough.

Bill’s world and beliefs start crumbling down as he watches a wolf emerging from his unconscious daughter. It’s a turning point in their relationship. Since his wife’s death, his entire existence has revolved around her. He begs her not to go and stay with him. But Robyn knows that her friend needs her now more than ever. The Lord Protector leads his men, armed with muskets and a cannon, into the forest, and puts Bill in chains. As Mebh tries to heal her mother, Robyn leads the regular wolves in a battle against the Lord Protector. As the fight rages on around him, Bill’s transformation into a wolfwalker begins and is completed when the Lord Protector prepares to kill Robyn in her wolf form. It takes the realization that he is actually going to lose his daughter this time to make him embrace his wolf side.

For the Lord Protector, this is essentially a war between pagan beliefs and Christianity. He often quotes Bible verses and prays to God before fighting the magical forces. The film doesn’t necessarily have an anti-Christian or even anti-progress message. After all, it establishes quite early that St. Patrick, the patron saint of Ireland, had an agreement with the pagans that people will maintain a considerable distance from the forests where old magic exists. What ‘Wolfwalkers’ does is criticizing the sheer encroachment by the relatively new religion and civilization at large. It’s the near fanaticism with which the dogmatists destroyed the ancient Celtic culture that faces the harsh scrutiny of the movie.

In Pursuit of a New Home 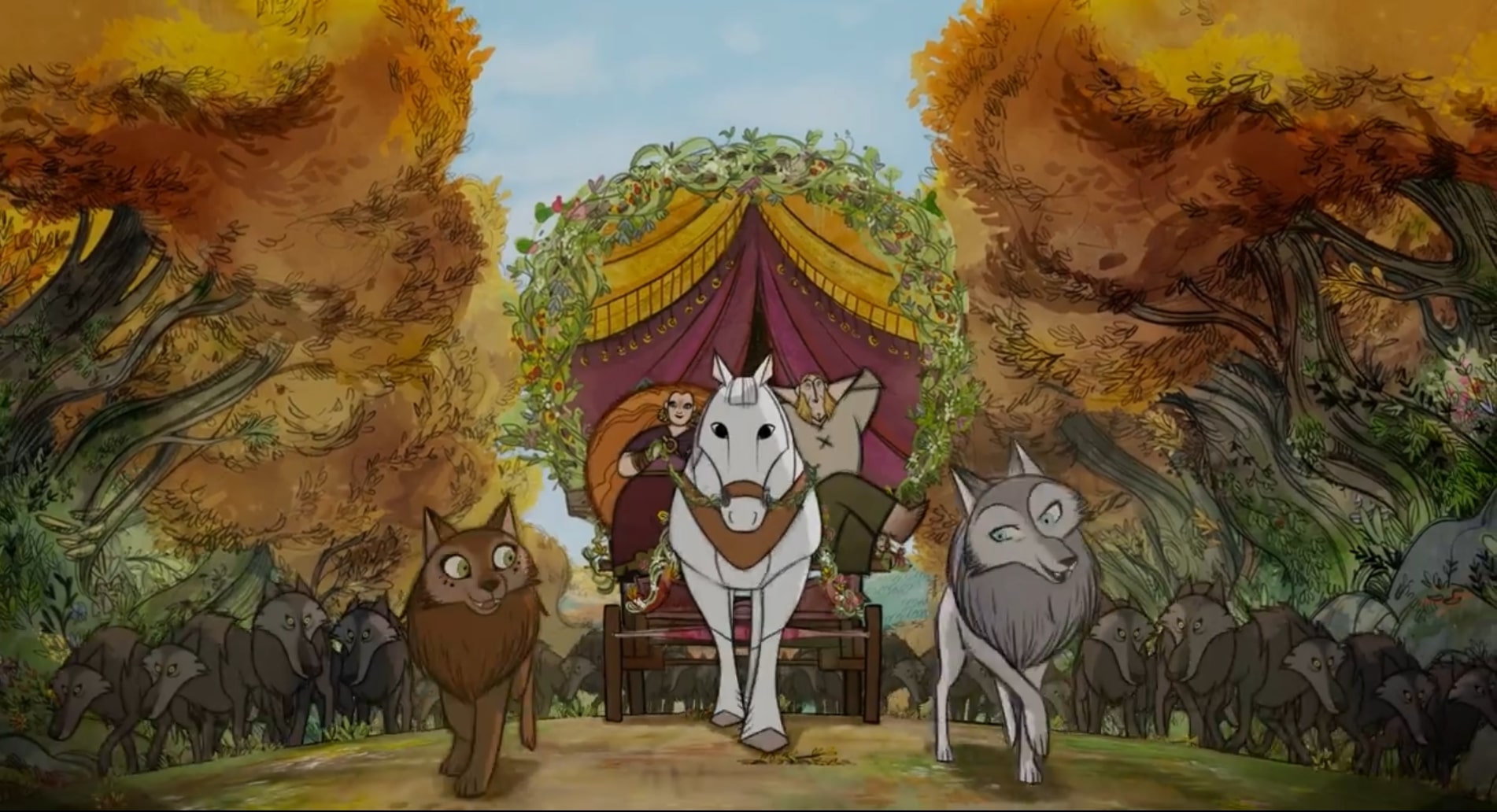 After a brief fight with Bill in his wolf form, the Lord Protector falls to his death from a cliff. Robyn and Mebh heal Moll with the help of the wolves. Despite his transformation, Bill, the former hunter, still doesn’t feel like a part of the pack. It’s only after Moll invites him to stay that he joins her, their respective daughters, and the wolves, in an embrace. The film ends with the family on the road in search of a new home from where they and the regular wolves will not be driven out ever again. They are traveling on a carriage drawn by the late Lord Protector’s horse. Bill and Moll are now together, which makes Robyn and Mebh actual sisters.

In that remote path, the family can truly be themselves. As the young girls fall asleep in the carriage, the two wolves emerge, ready to explore the new sceneries around them as they travel. Although the world is changing with the prevalence of the new religion, magic will live on as long as people are willing to be attuned to nature itself.

Read More: Where to Stream Wolfwalkers