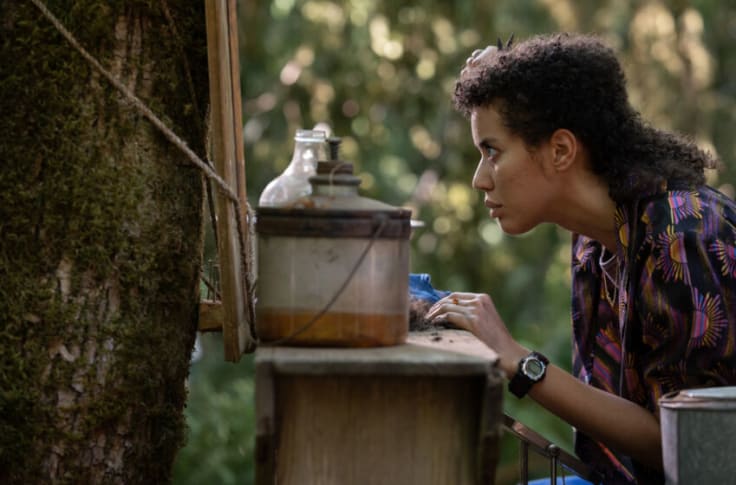 In ‘Yellowjackets’ episode 7, titled ‘No Compass,’ violence finally pays the Yellowjackets team a visit in 1996. Shauna (Melanie Lynskey as the adult and Sophie Nélisse as the teenager) tells Jackie (Ella Purnell) about her pregnancy. Coach Scott is relieved when Misty (Christina Ricci as an adult and Samantha Hanratty as the teen) announces that she will accompany Taissa (Tawny Cypress as an adult and Jasmin Savoy Brown as the teenager), Van, and the others as they go searching for human settlements.

More and more girls start believing Lottie. In 2021, Misty interrogates Jessica and finds out that Taissa hired her, while Shauna, Nat, and Taissa try to catch the blackmailer. Here is everything you need to know about the ending of ‘Yellowjackets’ episode 7. SPOILERS AHEAD.

‘Yellowjackets’ episode 7 begins as Taissa receives messages from both Nat and the blackmailers in 2021 and wakes up from her trance. She realizes what she has been doing and breaks down crying. This enunciates that none of the people that returned from the Ontario wilderness are mentally and emotionally healthy. Nat later even remarks on this during an argument with Taissa and Shauna.

With Nat, the issues are much more apparent as she is on a self-destructive path and in and out of rehab. But both Taissa and Shauna have deeply rooted psychological issues stemming from their 19-month-long ordeal. Shauna’s trauma seems to have manifested in her relationship with Adam. Misty once more shows how terrifying she can be.

Jessica has some experience being taken captive, so she doesn’t panic. She is quite forthcoming with the information that Taissa hired her. However, she knows that she has only one leverage in this situation: information. So, she tries to hide what she has come to find out about Travis’ death. But then, Misty threatens her father, and she promptly begins talking.

In 1996, troubled by her vision, Lottie gives a handcrafted totem made of deer bone to Van as the group led by Taissa ventures out into the unknown, hoping to find a town or settlement in the midst of hundred miles of wilderness. As they progress, things from Lottie’s dreams come true. They find themselves in front of a river, which eerily matches the river of blood that Lottie claims she saw in her dream. The compass starts to malfunction then. This makes everyone except Taissa question whether they made the right decision by leaving the safety of the cabin.

Meanwhile, Jackie confronts Shauna as she correctly thinks her best friend is hiding something from her. Literally and metaphorically cornered inside the cabin, Shauna reveals only a part of the truth. She tells Jackie that she is pregnant but then lies about the father, claiming that she had sex with Randy, who is one of Jeff’s friends. However, Jackie later finds out the truth when she reads Shauna’s diary.

Nat convinces Travis not to join Taissa and the others. They try to have sex, but things end prematurely. In 2021, Nat is forced to end her relationship with Kevyn after the latter finds out that she has handled his gun. The moment is both vicious and heartbreaking, as she seems to genuinely have been interested in a future with the police officer. But fearing that he will find out about what she and her friends did, she abruptly cut ties with him.

Yes, Van is most probably dead. She is the first victim of the brutal landscape the survivors find themselves in. Van is the first person who volunteers to come along with Taissa. She speaks about her visit to New York City and how disappointing it turned out to be for her. The next time she wants to go with Taissa and enjoy the entire New York experience with the girl she likes.

But Lottie’s terrifying visions continue to come true. The howling of the wolves wakes Taissa up, and she finds herself up on a tree with the deer bone totem hanging from her neck and the flare gun in her hand. She jumps down and finds a pack of wolves has attacked the girls, who are trying to fend them off with makeshift torches. She finds Van being dragged away by a wolf. She kills the animal, but it seems like that it’s probably too late. Van has been mauled in such a way that her teeth are exposed. By all indications, she is dead.

Who Is Adam? Is He Javi?

Adam (Peter Gadiot) is arguably the most mysterious character in the show. He virtually has come out of nowhere and seems to know exactly how to push Shauna. Episode 8 seems to imply that Adam is Javi more blatantly than ever before. In 1996, Javi takes the hunting knife from Shauna for some art project and later leaves a wooden horse on her window.

In 2021, Shauna makes a passing comment about how Adam claims to be an artist when she finds the latter in front of her house. This is probably another misdirection. If Javi is one of the survivors then Shauna would have probably recognized him. This show has gone to an extra length to cast actors whose appearances are similar for portraying the teenage and adult versions of the same character. It would be absurd for them to go through all that and then just claim that Shauna didn’t recognize that Javi was Adam.

Read More: Is Jeff Cheating on Shauna in Yellowjackets?