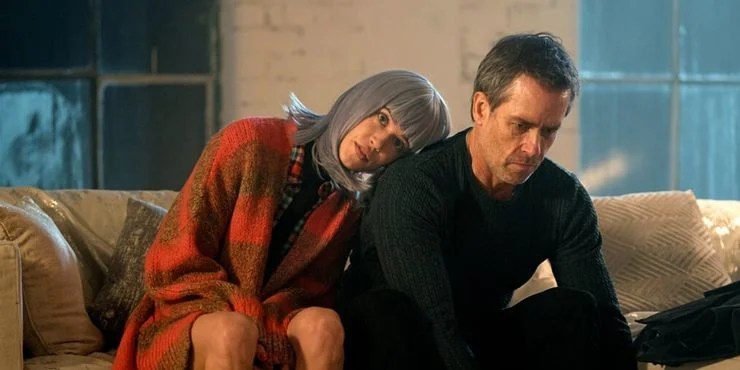 ‘Zone 414’ is a dark sci-fi dive into an era where androids exist to serve humankind’s darkest pleasures. Set in a seedy, industrial world, the film follows retired detective David Carmichael as he delves into the titular enclosure, the only place where humans and androids are allowed to interact closely. On the trail of a young girl in grave danger and hired by her egomaniacal father, David embarks on a murky journey.

The film introduces the concept of androids with emotions and delves into the parallel story of Jane, the first android to be placed in Zone 414. Once Jane and David’s paths cross, the two form an unlikely alliance. The film closes on an ambiguous note, with some crucial conclusions left unsaid. If you were left wondering about the fates of some of the characters, we’re here to figure out exactly what happens in the ending of ‘Zone 414.’ Let’s dive right in! SPOILERS AHEAD.

The film opens with a petite woman in an interrogation room who is shot by a former policeman named David Carmichael. We learn that the woman is an android as we watch machinery get extracted from her head. David is then told that killing the android was a test and that he is now hired. The man hiring David is eccentric businessman Marlon Veidt, whose company (Veidt Corporation) pioneers making humanoid androids. Marlon describes a contained zone called Zone 414, constructed to test out his company’s “creations,” and informs David that his daughter, Melissa, is lost within it.

David is thus offered two million pounds to retrieve Melissa, and our hero ventures into the heavily guarded zone. It is then gradually revealed that wealthy humans inflict their increasingly twisted (mostly sexual) urges on the androids inside Zone 414 in exchange for exorbitant sums of money. Jane, the first android to be placed in the zone, is revealed to be different from the other humanoid machines and is constantly plagued by nightmares and voices in her head.

When David finally runs into Jane, she reveals she’s afraid someone is trying to kill her and agrees to help him trace Melissa in exchange for his protection. She leads him to Royale, the human intermediary between the androids and their paying “clients.” Following a trail of increasingly seedy clues through Zone 414’s underbelly, David finally comes upon Melissa’s corpse, hanging in a boatyard.

David delivers Melissa’s body to Marlon, who remains strangely unemotional about his daughter’s death. The retired police detective attempts to warn the tycoon of the grim goings-on in Zone 414 but is overruled by Marlon, who furiously tells David not to disturb his empire. Our hero then confronts Marlon’s brother, Joseph, who inadvertently reveals that he killed Melissa. Joseph then dismisses David and enters Zone 414 to put a brutal end to Jane, only to be overpowered by the android.

David arrives just in time to see Jane standing over a badly beaten Joseph. The ex-cop offers Jane a gun and tells her to kill Joseph, which she does by repeatedly shooting him. We are then taken to David giving a recorded testimony, wherein he says that he found Melissa alive and well in her father Marlon’s house. Cutscenes reveal the tycoon with his newest android creation — an exact replica of his deceased daughter. The film then closes with Jane walking out of the heavily guarded Zone 414 gateway, where David waits for her.

Thus, in an unexpected move, Jane shoots Marlon’s brother, Joseph, and kills him. One would then expect the highly influential Marlon, also an egomaniac, to get revenge on Jane and David. However, as the eccentric tycoon reveals, nothing is more important to him than the stability of his empire. Thus, he prefers to keep the gruesome deaths of his brother (Joseph) and daughter (Melissa) under wraps and not cause panic amongst Zone 414’s wealthy patrons.

A strong hint about Joseph’s fate is also dropped in David’s testimony when he says that along with Melissa, he also saw Joseph safe and sound in Marlon’s home. This appears to imply that Marlon has also made an android version of his dead brother to keep up appearances. This fate also strangely fits the real Joseph’s character, who was mainly assigned menial tasks and lived in his brother’s immense shadow.

Does Jane the Android Escape Zone 414?

The film closes on a surprising note as we see Jane — one of Marlon’s most prized androids and the first synthetic to ever be placed in Zone 414 — walking out of its heavily fortified gates. Though Jane has long had a tortured existence in the seedy “Robot City” and often dreams of escaping, it seems like she doesn’t have to in the end.

It seems as if Marlon willingly allows Jane to leave Zone 414. This likely means that the tycoon and David come to an agreement since we see the retired detective change his testimony to protect Marlon’s interests by not revealing Melissa’s death. Thus, the tycoon likely allows Jane to leave in exchange for David’s silence. Considering David feels deep regret for aiding his terminally ill wife’s death, the fact that he is able to “save” Jane gives his arc a certain sense of redemption and closure as well.

Did Melissa Veidt Commit Suicide? Who Killed Her?

The discovery of Melissa’s dead body makes for an interesting turn of events in the narrative. Sadly, Marlon’s mentally tortured daughter faces a gruesome death at the hands of Royale. Though it initially seems like a suicide because she is found hanging, Melissa is actually killed by Royale on the orders of Marlon’s brother, Joseph. Details of the murderous plot are not revealed but we can piece together that Melissa would frequent Zone 414 and fell into Royale’s hands during one of her visits.

Royale then seemingly passed the young girl on to a particularly brutal human client before strangling Melissa to death. Jane sorrowfully reveals that she knew what was happening but didn’t put a stop to it, which explains the persistent nightmares of a young girl being strangled that the android keeps getting. Thus, Melissa is killed and does not commit suicide. As it turns out, her egomaniacal father doesn’t really seem to care either way, as his foremost concern is Zone 414’s perceived safety. Thus, Melissa’s murder is quietly swept under the rug, with even David testifying that he saw the young girl alive in her father’s house.