Marlon Wayans returns with his signature brand of humor in ‘A Haunted House 2,’ which fans of his hugely popular cultish horror spoof ‘Scary Movie‘ can’t get enough of. The unapologetic comedian once again goes through an extensive array of references and sexual innuendos that will have you either slapping your knee in laughter or shaking your head with mixed feelings.

In the franchise’s second iteration, Malcolm moves into a new house with his new girlfriend and her kids. After a heavy safe falls on his beloved dog, turning it into a “pancake,” things get steadily worse for Malcolm. Soon enough, people are getting possessed, and Malcolm himself is stalked by a psychopathic ex-lover who happens to be a haunted doll, to say nothing of his other ex-lover who, though human, is also haunted. Subtlety isn’t one of this movie’s strengths, and for good reason. But let’s dig into it anyway and see if we missed any raunchy, comedic crumbs in all the paranormal chaos of ‘A Haunted House 2’. SPOILERS AHEAD.

‘A Haunted House 2’ opens with Malcolm and his friend Ray Ray speeding to the hospital in a car with Malcolm’s possessed girlfriend, Kisha, in the backseat. However, when things get a little hairy, the two abandon the car with the possessed girl and run away. We are then taken forward 1 year to when Malcolm is moving into a new house with his new girlfriend Megan and her 2 children Becky and Wyatt. Things begin to get “scary” immediately, with Malcolm’s dog getting mysteriously squashed by a heavy safe. 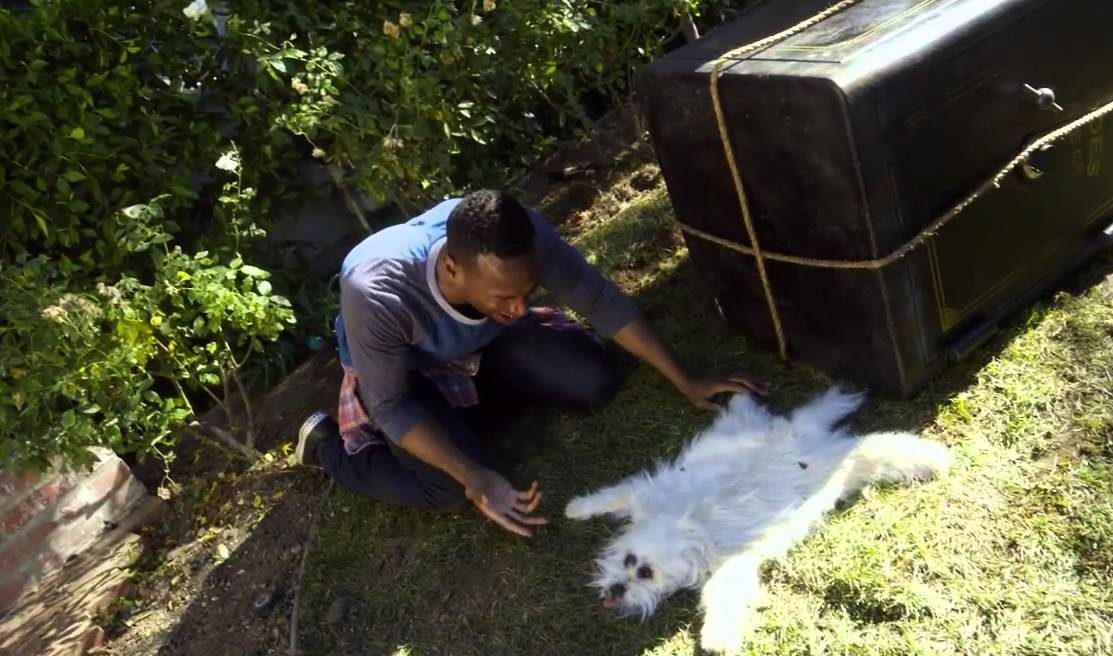 Soon enough, Wyatt has made friends with the surprisingly urban, invisible spirit Tony who hates Malcolm’s guts, and Becky gets obsessed with a dark box that she carries around everywhere. Malcolm himself spends a steamy afternoon making love to a haunted doll, who then refuses to leave him alone and begins to stalk him like a jealous ex-lover. Amidst all this chaos, the film’s hysterical protagonist remains the only one scared by all the paranormal activity going on.

When Malcolm’s paranormal advisor and part-time meth-dealer is unable to help him, he approaches ghost experts Noreen and Ned, an argumentative and unflattering version of the protagonist couple from ‘The Conjuring.’ Between their bumbling attempts at performing an exorcism and Malcolm’s Mexican neighbor helpfully helping him perform a blood ceremony that turns into an extended battle with a surprisingly well-trained chicken, the house is finally rid of spirits. Or so it seems.

As Malcolm and Megan settle into their couch, finally rid of the ghosts tormenting them, Malcolm’s haunted ex-girlfriend Kisha appears behind them. She snaps Megan’s neck, and Malcolm is seen running away in horror. We then see his friend Ray Ray cautiously enter the house and find Malcolm in the basement with a sheet over him, pretending to be dead. As he hysterically begins to explain to Ray Ray and his gang what happened, we see Kisha’s haunted, white-dressed figure in the background behind him. 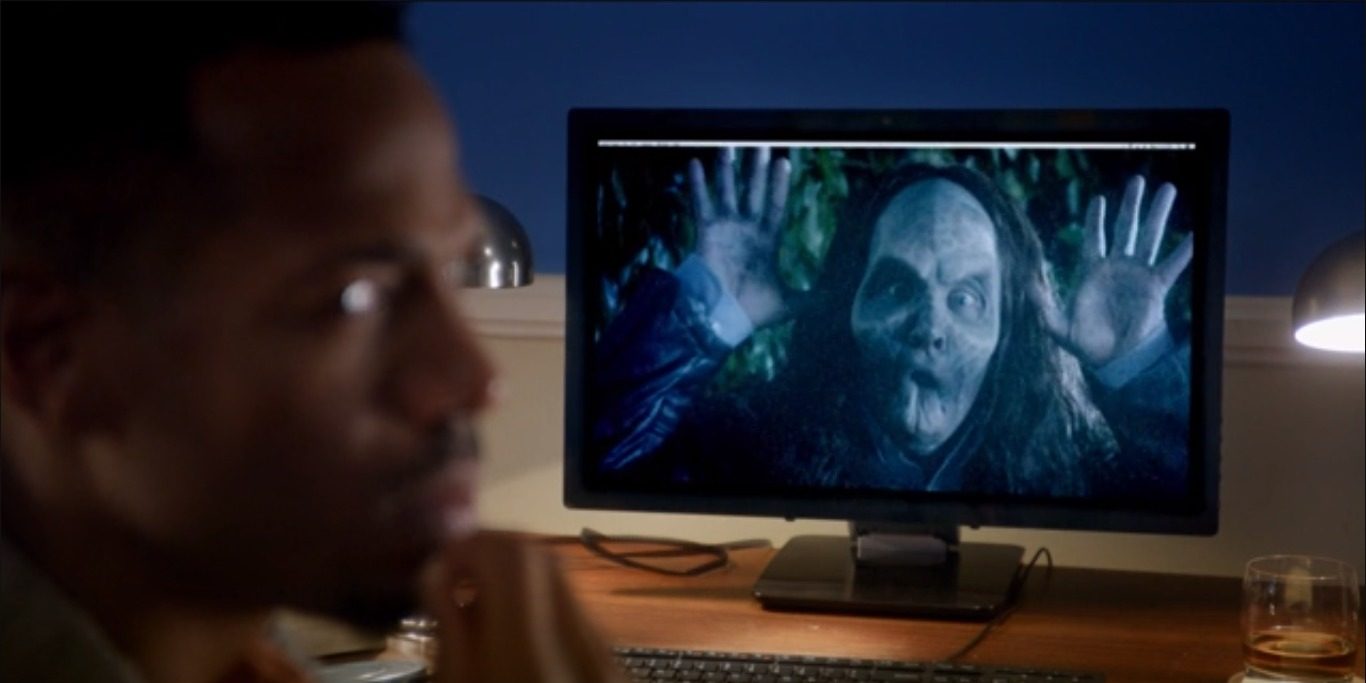 And so closes ‘A Haunted House 2,’ ending another chapter in the raunchy, unapologetic horror parody movie franchise. Malcolm is last seen screaming, with Kisha’s ghost descending the stairs behind him. Despite his friend Ray Ray coming to rescue him, it looks like Malcolm’s vengeful haunted ex-girlfriend will finally have her revenge. There is, however, hope for the goofy protagonist. As tormented as Malcolm is by all the sadistic spirits around him, he prefers to deal with them like he would with normal people. Throwing punches, playing peek-a-boo, and even making passionate love is how he has dealt with the spirits he has encountered so far.

In keeping with his proclivities, Malcolm could very well end up wooing Kisha and getting back with his possessed ex-partner. After all, it looks like his new girlfriend Megan is very much dead, making Malcolm available again. The comedic casanova also has a new penchant for demonically possessed lovers, which would make getting together with Kisha the most “logical” course of action. Barring that, there are myriad other ways in which Malcolm can save himself, including getting possessed, which he is briefly seen doing earlier. Suffice it to say, he survives. After all, he did compare himself to a cockroach.

The same cannot be said for Malcolm’s girlfriend’s family. From what Ray Ray sees when he comes to rescue his friend, Megan’s daughter Becky is decidedly dead on her bed, most likely killed by Kisha. The young boy, Wyatt, is nowhere to be seen, explaining why Ray Ray tells Malcolm that Wyatt is on a milk carton (where adverts for missing people were sometimes placed).

What Happens to Abigail?

The doll, more than an evil spirit, resembles a psychotic, jilted lover who ends up setting fire to Malcolm’s clothes and then calling the cops on him. Malcolm is also constantly torn between his inexplicable attraction to the doll and trying to get away from it. Hence, it is quite likely that Abigail will not give up so easily and will fight to get her man back. It remains to be seen whether Abigail the haunted doll and Kisha, Malcolm’s possessed girlfriend, have an epic demonic battle for his affection.

Which Popular Horror Films are Spoofed?

‘A Haunted House 2’ continues the largely successful formula of parodying popular horror films. The found footage genre films, like ‘Paranormal Activity,’ are largely parodied through Malcolm’s obsession with cameras and the nightly recording of every room in the house. The horror film ‘Insidious‘ is also poked fun at, with the séance scene of the horror film turning into a marijuana smoking circle that helps get Malcolm into “The Further.”

The distinct characteristics and appearance of the protagonists from ‘The Conjuring‘ make for rich parody material as the famous paranormal expert couple are portrayed as a bickering and petty pair with relationship issues. ‘The Possession’ and ‘Sinister’ are also spoofed briefly in the movie, as is ‘Annabelle.’ Of course, much of the film’s humor, as well as its wildly enthusiastic delivery, can be attributed to the talents of Marlon Wayans.

Read More: Is A Haunted House 2 Based on a True Story?