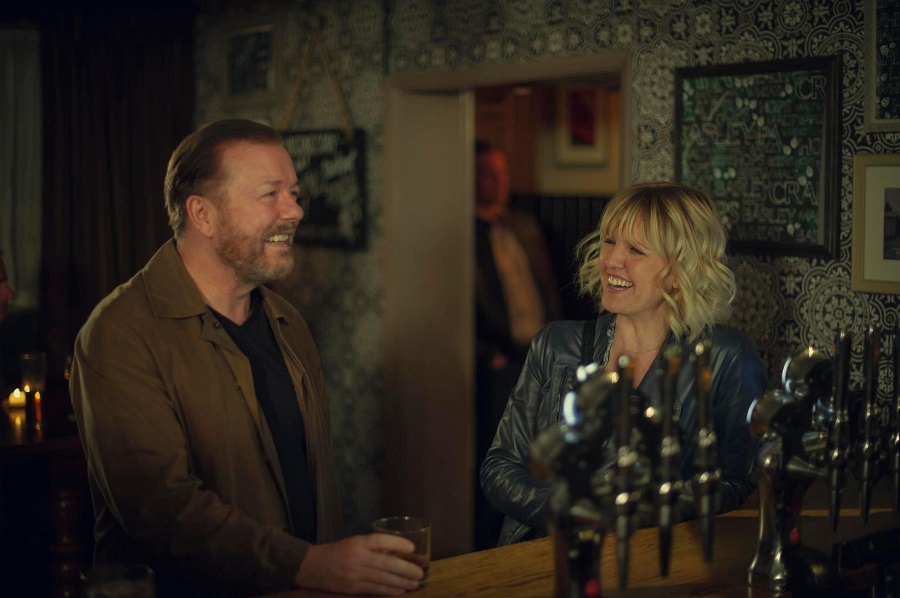 When ‘After Life’ premiered in 2019, it wasn’t something that anyone would have expected a Ricky Gervais show to be. Habitual of his unabashed and borderline offensive comedy, which often crosses the lines that it doesn’t believe in, what people, including me, expected was something along the lines of ‘The Office’ (even though it has been so long since it aired) and his other famous works.

While there was a hint of some jokes from his stand-ups in it, what made ‘After Life’ stand apart was how emotional it proved to be. It turned out to be a feel-good show that made you believe in love again, and also in its tragedy. Perhaps, it was because it caught us off-guard that we fell in love with it.

Comparing the second season with the first, there are a lot of things that don’t go as well as expected. Now that we knew what the tone of this story was, we were prepared for whatever Gervais would throw at us. On the front of comedy, the season doesn’t add much. If anything, the laughs are lesser and sporadic this time around, and the story is more focused on the emotional turmoil that Tony has now inflicted upon himself, because he realized, in the last season, that he can’t punish others for his pain.

Reeling from another loss, Tony requests everyone to keep their distance, as he does not respond well to sympathy. Despite this, people do nice things for him, which leaves him teary-eyed. He and Lenny interview a 50-year-old man who identifies as a 9-year-old girl, which adds some comic relief to his day. He asks Emma to let them be as they are. He can’t promise anything, but there is a chance that he might get better. But Emma doesn’t want a ‘Groundhog Day’.

There are a number of things about the second season of ‘After Life’ that a lot of people might not like. Their complaints would be justified; the show does tread similar, if not the same, grounds as its first season. Understandably, Tony is still not over Lisa. Jumping into another relationship is not as easy as the ending of the first season had presented it to be. But even in that, the grief that it explores so well, we find some threads falling loose, some sub-plots not getting the finish that they deserved.

The show allows other characters to flourish this season, and for the most part, it works wonderfully well. Postman Pat and Roxy’s love story is sweet, and to see Anne beyond that cemetery is refreshing too. I’m glad she is not just a ghost. However, the space provided to Matt’s storyline doesn’t really come together very well. It ends as abruptly as it had started, and that does leave us a bit disappointed. Seeing his psychiatrist again was no pleasure, either. We’d rather watch more of the local news that the Gazette covers, or how Pat and Roxy’s next date goes, or even more about Sandy’s life.

Even with these flaws, there are some things that the show does very well. Leaving the jokes on the side-lines, Gervais focuses entirely on Tony’s flickering mental state. It is realistic, and while we are hopeful, we also get worried about him. The second half of the season, especially, lands one gut-punch after another, and there is no holding back those tears. The finale keeps up with this tempo, and it gets darker for Tony, and we get really worried about Brandy, whom we absolutely adore. She is the best girl.

To the main question: was it wise to make a second series? Had Gervais left it as it is, we would have had no complaints. But it’s here, and yes, it does falter here and there, but it is the season that maybe we needed. Especially in these times, when we need to be reminded of all the things that are important and fleeting. In these dark times, we do need comedy; it keeps us sane. But we also need a good cry; it keeps us alive. ‘After Life’ Season 2 delivers that.