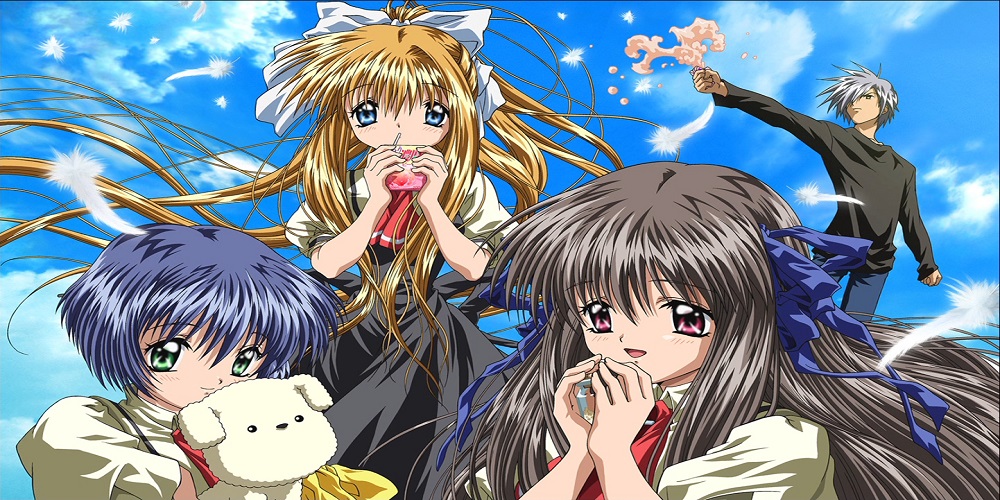 ‘Air’ is a short anime series that has been adapted from a visual novel. While the visuals novel revolves around the alternate stories of three different female protagonists, the anime makes good use of its 12 episodes to bring a story that does justice to its source material. The story has been beautifully done and though, for obvious reasons, it is a little different from that of the game, it is still equally moving and will surely leave you with tears in your eyes. If you’re not able to understand the Kanna Arc the first time you watch it, try watching it again and I can assure you that you’ll come to appreciate the series a lot more. The characters are all very realistic and as a viewer, it’s very easy to understand what each of them is going through. The only problem with them is that quite a lot of characters don’t receive the development they deserve because of its short runtime.

Kyoto Animation, as always, does a stunning job with the animation. ‘Air’ offers some breathtaking scenes and some of the most amazing backgrounds that just make the whole viewing experience even more thrilling. The music is as good as the animation, especially the heartwarming opening theme that subtly prepares you for each episode. ‘Air’ can be a little off-putting in the beginning because things may not make sense to most people. But if you’re patient enough to stick with it till the end, you’ll be surprised at how amazingly its entire timeline has been paced. Overall, I would only recommend it to someone who is not just a romance anime fan but is also a little open-minded. If you’ve already been through the visual novel version of it then I don’t think you’ll be able to enjoy it much but for anyone else, this tear-jerking anime deserves a chance. Not to mention, it can get really depressing at times so make sure you’re prepared for that.

Air Season 2 Release Date: When will it premiere?

‘Air’ season 1 premiered on January 7, 2005 and came to an end on March 25, 2005. During this span, the anime aired a total of 12 episodes with each one of them being 24 minutes long. While most visual novel adaptations fail to reach the standards set by their source materials, ‘Air’ proves to be an exception. Soon after its release, the anime was very well accepted fans and though its overall rating on most platforms was quite average, most viewers were expecting a sequel of it.

Unfortunately, it has been more than a decade now since its release and Kyoto Animation has not announced anything about ‘Air’ season 2 yet. After all these years it seems very less likely that there will ever be one. But even then, if you’re still craving the supernatural drama of this anime, you can always watch the alternate versions of it or you can also try out its visual novel. If we get any updates of its renewal or Air season 2 release date, we’ll surely update it here in this section.

The English dub of ‘Air’ is available on Funimation.

Yukito Kunisaki, the main protagonist, sets out to search for a Winged Maiden that his mother would often tell him about though childhood tales. While he’s at it, Yukito tries to make a living through puppet shows and stays in a small town that he wishes to leave soon. But his life takes a turn when he meets an eccentric girl named Misuzu and he is forced to stay in the small town a bit longer after he is invited to stay with her.

Soon Yukito gets more familiar with people of the town and even makes a few local friends. For a while, he even forgets about his hunt for the Winged Maiden and instead, starts helping out the locals with their problems. With time he starts to develop a sense of belonging with Misuzu and the people of the town and though he has put his dream of finding the Maiden on hold, he might be closer to it than he thinks he is.

Misuzu is the main protagonist of ‘Air’ who is a beautiful young girl with long blond hair and deep blue eyes. She’s a very innocent girl and is kind towards everyone around her. She is also a little clumsy and often trips over things. She has a habit of saying “Gao” every time she’s in trouble. When she was slightly younger, she had this obsession with dinosaurs. She might seem all ordinary in the beginning but she’s actually quite immature for her age. Every time she gets close to someone she starts crying. It is later revealed that because of a curse that she has inherited from her mother, getting close to someone can make her fall sick and can even kill her.

Kano is Misuzu’s classmate and friend whose mother died when she was still a baby. In appearance, she is very distinguishable because of the yellow bandana tied to her right wrist. As a child, Hijiri had once taken her to the festival where the two of them had visited a shrine. At this shrine, Kano had grabbed some white feather which later turned out to be possessed by a mother whose child was executed as a sacrifice. During the day, everything seems normal but impact of the curse becomes evident when Kano starts to sleepwalk at night. Disturbed by this, Hijiri decides to become a doctor to find a cure for Kano’s illness. When it comes to her appearance, she has an average height for her age and is usually seen in her school uniform. She has short light blue hair and piercing green eyes. Despite having such a troubled past, Kano is quite outgoing and is kind to everyone around her.

Yukito is the main protagonist of ‘Air’ who has always been trying to find “The girl in the sky”. His hairstyle is very similar to that of Kano’s and his eyes are yellow in color. When he was a child, his mother had taught him a special kind of string puppetry. He now uses this to earn a living and keeps moving from one place to another. His mother had initially abandoned him at a shrine and he was raised by a group of monks. She had later returned and told him the story of the Fallen Maiden. Just before dying, his mother had asked him to follow the path that she had laid out for him. Yukito is short-tempered and even the smallest problems are enough to trigger him. He is quite tall for his age and is usually seen in a loose black t-shirt with blue baggy jeans.

Minagi is another female protagonist of the show who is Misuzu’s classmate. She’s a cute looking girl who has long greyish hair tied up with two long ribbons. She has big brown eyes and is often seen in her school uniform. She is shy and only talks to the people who are very close to her. She loves astronomy as it gives her the feeling of being closer to the sky than everyone else.