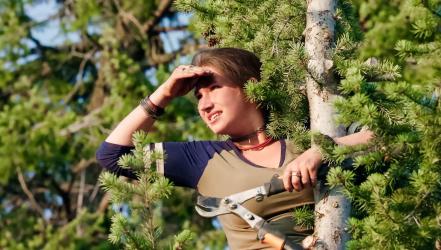 A survivalist show meets the pressure of being on television in ‘Alaskan Bush People‘. Living outdoors, close to nature, poses its own challenges, so one can only imagine how hard it is to have a camera following you around while you are going about your daily chores. The Brown family has successfully maintained this balancing act over the seasons, despite sometimes being called out for the lack of authenticity in ‘Alaskan Bush People’.

The matter of veracity aside, the crux of the issue is whether the show is entertaining and informative, and this is where ‘Alaskan Bush People’ scores highly, which has kept the fans hooked over time. Currently, on Season 11, we have seen the Brown family facing a whole new set of challenges as they have shifted base from Alaska, and is now looking to rebuild Browntown.

Over the episodes, they have faced various troubles like a tough storm, the need to assemble a windmill, and not to mention, a bear. In fact, the previous episode witnesses a wedding going down in the bush, as the Brown family struggles to keep their ambitious project on track at a time when emotions run high.

Naturally, you must be wondering about what went down in the latest episode, and we are here to tell you that. However, first, let us walk you through where and when you can see the upcoming episode of ‘Alaskan Bush People’.

‘Alaskan Bush People’ Season 11 Episode 6 is slated to air on Wednesday, January 15, 2020, at 8 p.m. ET on the Discovery Channel. The episode has been titled ‘Bear Meets Girl’.

The premise follows one of the ostriches laying an egg, which occupies the attention of some of the family members, who want to find a way to incubate it. Bear gets a visit from a girl on the North Star Ranch, and the family prepares for Billy and Ami’s 40th wedding anniversary, and seem to have prepared a surprise for the occasion.

Being a Discovery Channel show, the best way to see ‘Alaskan Bush People’ is with a cable connection. However, if you do not have a subscription, you can check out the show on Discovery Go, online. Cord cutters also have the choice to head to DirecTV, FuboTV, and Philo TV to watch the series. Some of these services even provide free trial periods before charging you.

Alternately, you can add Discovery to your existing Hulu pack and stream the latest episodes, or head to Amazon Prime where you can buy and stream the episodes.

Episode 5 of ‘Alaskan Bush People’ has been titled ‘Bam Bam’s Big Build and Bears’. The 41-minute episode brings back a problem that the Brown family has had to face earlier in the season. Yes, we are talking about bears. Living in the wild might have its upside like being one with nature, but it brings its set of problems, among which wild animals are definitely present.

When the hungry predator makes its way deeper into the ranch, the Brown family has no option but to retaliate strongly since their lives might be on the line with a bear on the prowl. It falls upon Gabe and Bird to take steps to dissuade the beast from showing up again. Meanwhile, Bam has to exercise diplomacy and get along with his siblings, trying to break ground on his homestead.

Overall, the episode has quite a bit of action going on but ends on a nice note, with Gabe surprising the Wolf Pack. It remains to be seen if the Brown family continues to face problems from the bear in the upcoming episodes.