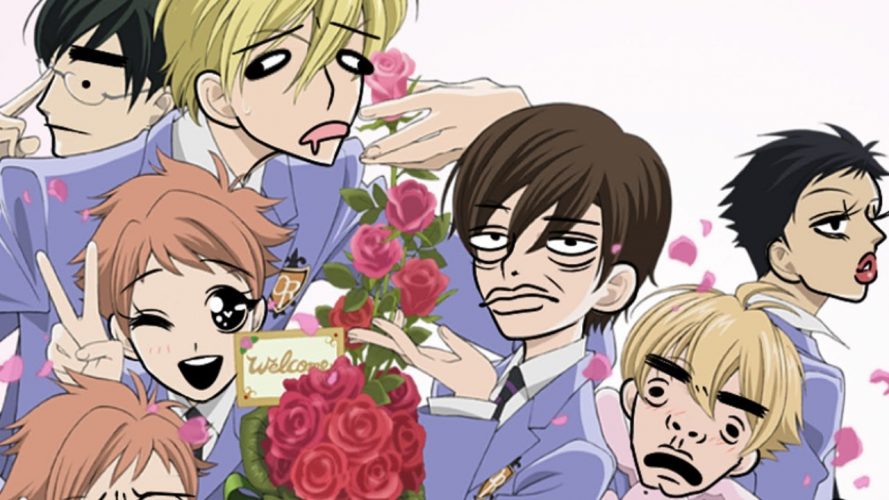 Ouran High School Host Club is a Japanese Manga series that has been turned into anime. The story follows Haruhi Fujioka who is a bright student studying in a  prestigious school through a scholarship. Haruhi’s humble origins set her apart from other students from aristocratic families. One day she accidentally discovers that a music room that is being secretly used as a Host Club. In her frantic effort to get away from the room, she breaks an antique vase worth millions. Now in order to repay, she is made an errand boy. But her gender ambiguous appearance and strong presence lift her as a member of the host club. It’s a funny series focussing on the shenanigans of Haruhi and the boys of the club.

Love comes in all shapes and sizes and ‘Lovely Complex’ celebrates this very complexity of love. We have our boy Ootani Atsushi and girl Koizumi Risa. Now they form quite a different equation. At 156 cm, Atsushi is much smaller than most guys while Koizumi’s height of 172cm renders her ridiculously tall. The plot starts to move when both the crushes of these two fall in love with each other leaving these two heartbroken and embarrassed. They form a unique friendship as their day-to-day talks, laughs, and fights are comically depicted. Even their teacher terms them as comical duo. With time they discover many underlying similarities in their taste of music and other things as they ponder over a possible romantic liaison between them. The show celebrates the unconventional parameters of love as the makers treat the feelings of first love sweetly and tenderly.

‘Kimi ni Todoke: From Me to You’ is the story of the journey of one Sawako Kuronuma. Sawako is a sweet, timid girl who is innocent and subdued in nature. She is vulnerable and lacks social recognizance. To add to her plight, she is often called Sadako by her classmates as she shares a resemblance with the girl from ‘The Ring’. Because of this, she’s often feared and misunderstood. Naturally, she has no friends and is attracted to the most handsome boy in the class, Kazehaya. Kazehaya is popular and his refreshing attitude attracts Sawako. After a certain period of distance, they finally initiate talking after a chance encounter. As they talk, Sawako’s life changes greatly. She becomes more outspoken and happy as she meets with new people and friends. She’s eternally thankful to him and with time she develops a beautiful and personal romantic relationship.

‘Skip Beat!’ follows the story of a 16-year-old girl named Kyouko Mogami. Kyouko is a hardworking innocent girl who works relentlessly to support the dreams of his childhood friend Shoutarou Fuwa because she loves him. Shoutarou has big dreams of becoming famous in whole Japan through music.Kyouko has a soft corner for him and even decides to run away with him to Tokyo as Shoutarou decides to make a mar6 in music industry. Sho, as his fans call him, becomes famous in Tokyo but Kyouko’s hard work is not recognised. One day she learns the way Sho perceives her: as a maid and servant with no ambitions in life. Kyouko is heartbroken with this realization and vows to prove herself by beating Sho in the race to be the most famous personality in Japan. Thus, her life changes as she takes a few hard decisions and works hard to rise to the top. In her latg, she meets numerous hardships but she keeps on going forward. ‘Skip Beat!’ chronicles Kyouko’s journey as she faces various struggles on her way to greatness.

‘My Little Monster’ is another anime that celebrates the intrinsic traits in unconventional love and how love blooms in places it is less expected to. The anime focuses itself around the lives of Shizuku Mizutani and Haru Yoshida. Shizuku is a cold nerd who is only interested in her studies. She has no friends, no social life and her cold aloofness has brought her the nickname of ‘dry ice’ by her classmates. This apparently emotionless girl meets Haru when she visits his house to deliver class notes and things change. Haru is perceived as a violent brute, who lacks finesse in a social gathering and is quite unrefined about human relationships. Haru quickly and straightforwardly propsesp to Shizuku. Shizuku is astonished by Haru’s internal softness, kindness and his innocence as these two bonds. Through their friendship and confused state of romance, both these people achieve a better understanding of human emotions and in process both grow into better human beings.

‘School Rumble’ is a perfect high school romantic comedy. Based on a fictional Yagami High School, the students of class 2-C undergo teenage emotions and crisis. Tenma Tsukamoto is a normal average second-year student who dearly loves her class’ edgy nonchalant boy Oji Karasuma. But she is unable to confess her feelings to him. On the other hand, Tenma’s friend Kenji Harima loves her. He tries to confess his emotions but something always comes up to deter him from doing so. As if fate himself is playing spoilsport in their love. But the complications don’t stop there. The students face same emotions for multiple people as they move through a confused state of transience. The central love triangle is further complicated by numerous plot twists including Harima’s complex relationships with Yagami’s best friend and Yagami’s sister. The show is full of twists, turns and hurdles in the path of attaining the bliss of teenage love.

‘Aoharu × Machinegun’ tells the story of righteous  Hotaru Tachibana. Hotaru is a girl disguised as a boy because she soon realizes that life is much easier for a boy with unconventional choices. She has a strong moral sense as she tries to avenge the victims. The central story takes shape when one of her friends is deceived by a local club. However, the owner of the club Masamune Matsuoka challenges her in a survival game where the first person hit by a toy gun bullet loses the game. Reluctant at first, Hotaru takes up the challenge. Afer a greatly intense game where the inn suffers a few blows Hotaru is defeated and is made to repay the destruction of the inn by joining the club of ‘Toy Gun Gun’. She is not great at the sport, but with time she gradually takes interest in the game as her relationship with the members of the club sweetens. However, the club’s strong no against female participants acts as a roadblock in achieving her dream.

Chiyo Sakura is a bubbly high school girl who has a big crush on Umetarou Nozaki. Nozaki is an oblivious young boy who has no personal experience of love. When Sakura confesses her love for him he promptly gives her his autograph as he thinks that she is another fangirl. As it turns out, Nozaki is famous manga artist writing under the pen name of Sakiko Yumeno and he mistakes Sakura’s feelings for him. Sakura tells him that he wants to live with him and Nozaki invites her to his house. Together they develop his new manga as Sakura befriends few of her classmates who act as catalysts in moving the plot forward.

Misaki Ayuzawa is a strong, independent and an iconoclastic character who breaks many boundaries in her school. She’s the first female student council president of Seika High School, a school infamous for its wanton, unruly boys where females are a minority. Naturally, boys have grudges on her as she is nicknamed ‘demon monster’ by them. But she fights all the adverse situations as her invincible image sets her apart. However, Misaki has a secret to keep. She works as a maid at a maid cafe to keep her struggling family afloat. Things become more complex when the school’s most popular boy Takumi Usui arrives at the cafe and promptly discovers the obvious secret. There rises a crisis around Usui’s handling of the new sensational information. Interestingly, he doesn’t disclose it to the public as the two forms an intimate relationship between them. The plot is further complicated when Usui’s disturbing familial past threatens to destroy their relationship.

‘Special A’ tells the story of Hikari Hanazono as she forms an unconventional equation with Kei Takishima. Hikari had ostentatious air about her wrestling abilities. After being introduced by their wrestling loving fathers, Hikari promptly challenges him but she’s beaten thoroughly by Kei when she invited him for a match. After being beaten, Hikari’s delusions about her abilities was thwarted and from there on, she swore to beat him in every field, from academics to sport. But much to her disappointment she always comes second. She takes admission in the same prestigious school Hakusenkan as Kei is in and for years they have been in an elite group of precious students called Special A. The story is sweetened by the fact that Kei harbors amorous feelings for her but without her complete knowledge. The anime revolves around the lives, emotions, and competitions of the members of Special A as they grow through their school life.

If you liked ‘Ouran High School Host Club’ there is a strong chance that you will love ‘Fruits Basket’ as well. The anime follows the protagonist, the high school student Tooru. After the sudden death of her mother, Tooru is supposed to live with her grandfather. But because of her grandfather’s house being renovated, she attempts to find a shelter. Tooru doesn’t want to be a burden on her friends or family so she decides to live in a temporary tent by the forest. As her makeshift tent is destroyed she’s found by Yuki Souma and his cousin Shigure Souma. They offer her to stay in their house till her grandfather’s house is fixed. Tooru accepts the gracious offer and agrees. However, upon entering the house, Tooru soon realizes that it’s unlike any other average household as mysterious zodiac beasts rule them. Tooru’s resilient nature tries to break the curse of the house as the story moves on.