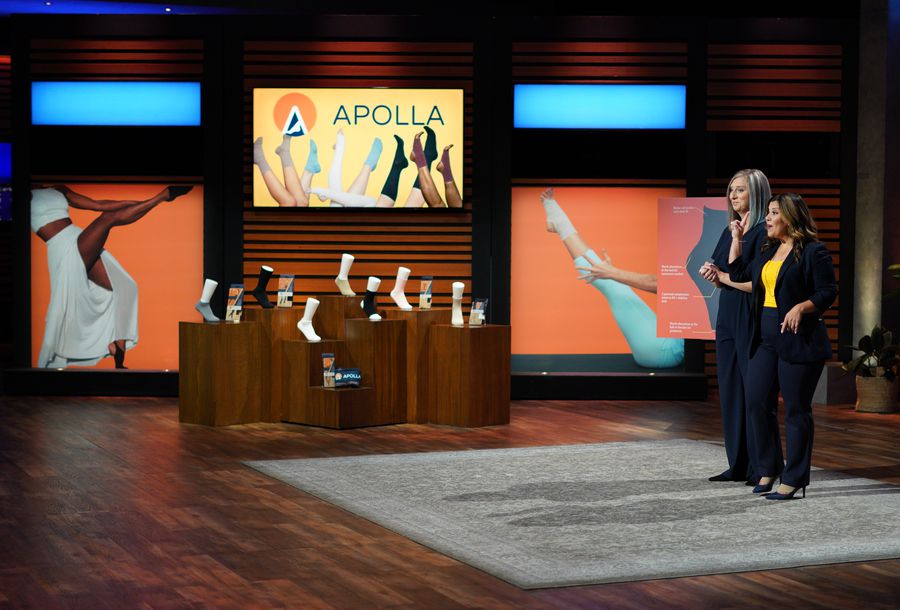 ‘Shark Tank‘ season 13 witnessed entrepreneurs Kaycee Jones and Brianne Zborowski present their product line, Apolla, hoping for a considerable investment from the Sharks. Apolla is a collection of compression socks aimed mainly at professional dancers and athletes as they help provide more traction than the regular kind. Such a unique product piqued the curiosity of many, who might be looking for more details about the company and its development following ‘Shark Tank.’ Here’s everything you need to know about Apolla!

Apolla: Who Are They and What Do They Do?

Kaycee Jones and Brianne Zborowski’s tremendous experience in the field of dance contributed massively to Apolla’s success. Brianne earned her Bachelor’s Degree in Business, Management, Marketing, and Related Support Services from Oakland University before entering her professional life as a Sales Consultant. However, with dance being her first love, Brianne soon took on the role of Competition Co-Director & Instructor at Releve Studios in California. During this time, she even worked as an Accounting Manager and Food Safety Coordinator for Eureka Specialties.

Brianne later decided to shift her focus entirely to the field of dance after being offered the role of Operations Manager at Dana’s Studio of Dance. Today, Brianne is heralded as the Co-Founder of competitive programs at three dance studios across the United States. Apart from co-founding the MOVZ Dance Company, she serves as the co-host of ‘Beyond The Steps,’ a weekly podcast on dance.

On the other hand, Kaycee Jones discovered her love for dance early in life, as her mother was a popular dance instructor. Thus, the American Falls, Idaho, native decided to follow her passion and pursue a Bachelor of Science in Physical Education, Sport Science, and Dance from Idaho State University. In the meantime, she kept reaching new milestones in the field of dance. Kaycee even worked as a Guest Talent Stage Manager at Disneyland while earning a Master of Science Degree in Kinesiology and Exercise Science from California State University Fullerton.

Over the years, Kaycee has perfected her skills as a dancer and is a brilliant and successful coach. She is also a registered Yoga teacher and has worked for the University of Pennsylvania Wharton as an Operations Manager for their MBA Program. While dance brought Kaycee and Brianne together, they soon realized that performing in regular socks can be quite a health hazard as they don’t offer enough traction or compression. On the other hand, shoes made it impossible to perform freely, negating them from the equation. Thus, with the idea of Apolla socks in their minds, Kaycee and Brianne spent two years testing and perfecting their prototype.

Besides, the duo even looked into domestic manufacturing before co-establishing Apolla in 2016. All of Apolla’s socks provide better traction below the foot along with ankle stability and arch support. Moreover, they even include a particular type of energy absorption padding in the heel, which increases comfort. Besides, the level of traction on each sock can be customized by breaking them to a preferred point and using a separately sold adhesive to maintain the level. Additionally, each sock offers best-in-class compression, which helps blood circulation and reduces inflammation.

Where Is Apolla Now?

Upon its launch, Apolla’s founders were left pleasantly surprised when their product line was met with a host of positive reviews. Their popularity spread like wildfire, and by 2018, Apolla was associated with world-famous organizations, including Sonya Tayeh’s dance symphony, ‘You’ll Still Call Me By Name,’ and the dance reality show ‘So You Think You Can Dance.’ Subsequently, Kaycee and Brianne sensed an opportunity in the sportswear market and jumped right in, significantly increasing sales.

Additionally, as a testament to their authenticity, Apolla received the American Podiatric Medical Association’s Seal of Acceptance, which recognizes products that significantly contribute to foot care. At present, Apolla socks are manufactured entirely in the United States under REPREVE, a company known for exclusively using recyclable fibers in its products. The socks are available on the company’s official website as well as on Amazon.

Apolla compression socks come in several different varieties, which range from $36 to $38 per pair. Besides, the company even sells a pair of rubber and fabric slides for $40, while the traction refresher spray is listed at just $9. Moreover, one can even opt for a Dance Kit for additional discounts. It took almost no time for Apolla to skyrocket to the top of the competition, and the company appears to be destined for further success in the future.