Are Critical Thinking’s Marcel and Akopyan Based on Real Chess Players? 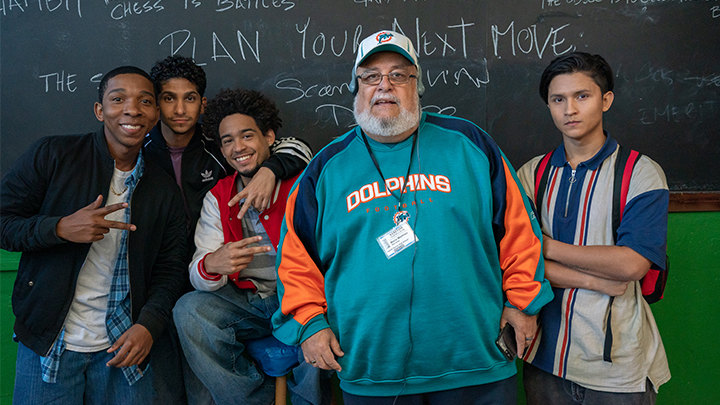 Set in 1998, Miami, ‘Critical Thinking’ is a sports drama film about a group of boys at Miami Jackson High School who try to make a name for themselves in the chess world. Although Marcel Martinez joins Miami Jackson and the other chess players, he initially defeats them mercilessly. Later, he plays with Coach Mario Martinez, who is stunned by Marcel’s skills and understanding of the game. Toward the end, when everything is on the line, Marcel is the only player who has scored the second-highest number of individual points.

Consequently, the organizers pit Marcel with the highest individual points, Harutyun Akopyan. Thus, Miami Jackson’s fate comes down to the result of Marcel’s game. Overall the John Leguizamo directorial carries several undertones of realism through the backdrops, cast performances, and character arcs. The authenticity in the overall film makes us wonder if Marcel Martinez and Harutyun Akopyan are real chess players. Well, let us find out, shall we?

Yes, Harutyun Akopyan and Marcel Martinez are based on real chess players. Written by Dito Montiel and directed by John Leguizamo, the film is a biographical sports drama film about Coach Mario Martinez and the group that won the first-ever National Chess Championship from Miami Jackson High School. Marcel Martinez is a Cuban native who immigrated to America and joined the Miami Jackson High School. In an interview, Marcel revealed that he had played chess since he was 7 or 8 years of age and had gotten good at the sport.

After Marcel defeated one of the boys from the Miami Jackson group, he was admitted to the Miami Jackson High School to learn from Coach Martinez. As we see in the movie, even the real-life Marcel had a book that comprised all the chess moves and strategies he had learned until then. The chess prodigy also played multiple people simultaneously with his eyes closed or blindfolded. In 1999, Marcel became the Junior National Champion, and in 2004 he shared the first-place win in the US Open.

However, by 2002, Marcel was reportedly gearing up to tie the knot and had also started working at his then-fiancee’s family liquor store. His rival in the final moments of the film, Harutyun Akopyan, is also a real chess player. Although we do not see him in the movie until the climax, he is one of Marcel’s most worthy opponents. In real life, Akopyan hails from Soviet Armenia and started playing chess at age 5. When Akopyan immigrated to the US, he played more often and hoped to become a Grandmaster like his idols, Bobby Fisher and Tigran Petrosian.

When defending champion Akopyan lost to Marcel in 1998, he was at 2370 world ranking, just 30 short of being a Senior Master. In his entire career, Harutyun Akopyan won 13 National Chess titles. After his stint with chess, Akopyan turned toward writing and filmmaking. At the Grad School at California State University, Northridge, Akopyan learned about screenwriting and shooting and made a career out of it. Although the film essays a part of their journey leading up to the 1998 National Chess Championship, in real-life, the two players have accomplished numerous milestones after 1998. Thus, to reiterate, Marcel Martinez and Harutyun Akopyan are real-life chess players. The two started very young, won National Chess Championships, and later did other things in life.

Read More: Mario Martinez: Is He Based on a Real Chess Teacher? Where is He Now?