Are Dove Cameron and Thomas Doherty Still Together?

Dove Olivia Cameron is an American actress and singer who has won the Daytime Emmy Award for Outstanding Performer in Children’s Programming. She met her piece of the missing puzzle, Thomas Anthony Doherty, months after she broke off her engagement with former ‘Liv & Maddie’ cast member, Ryan McCartan. Thomas is a Scottish actor and singer who rose to fame after playing Harry Hook in the ‘Descendants’ franchise.

Despite being with Ryan for about three years, it hardly took Dove any time to fall for Thomas; such was the pull she felt towards him. In less than six months, they had already progressed to a point in their relationship at which most of the couples arrive in years. With a start as magical as that, it is natural to wonder whether the two are still together or not?

Dove Cameron was going through a tough phase in her life when her paths crossed with Thomas Doherty in December 2016. But after successfully surpassing the initial hurdle, they quickly formed a deep connection with each other. The adorable couple met on the set of ‘Descendants 2,’ and instead of taking baby steps into the relationship, they ran into it heads on. Thomas had already said the “three magical words” within a week of meeting her and never went back on his words or changed his stance. They even got matching tattoos after just two weeks of knowing each other. 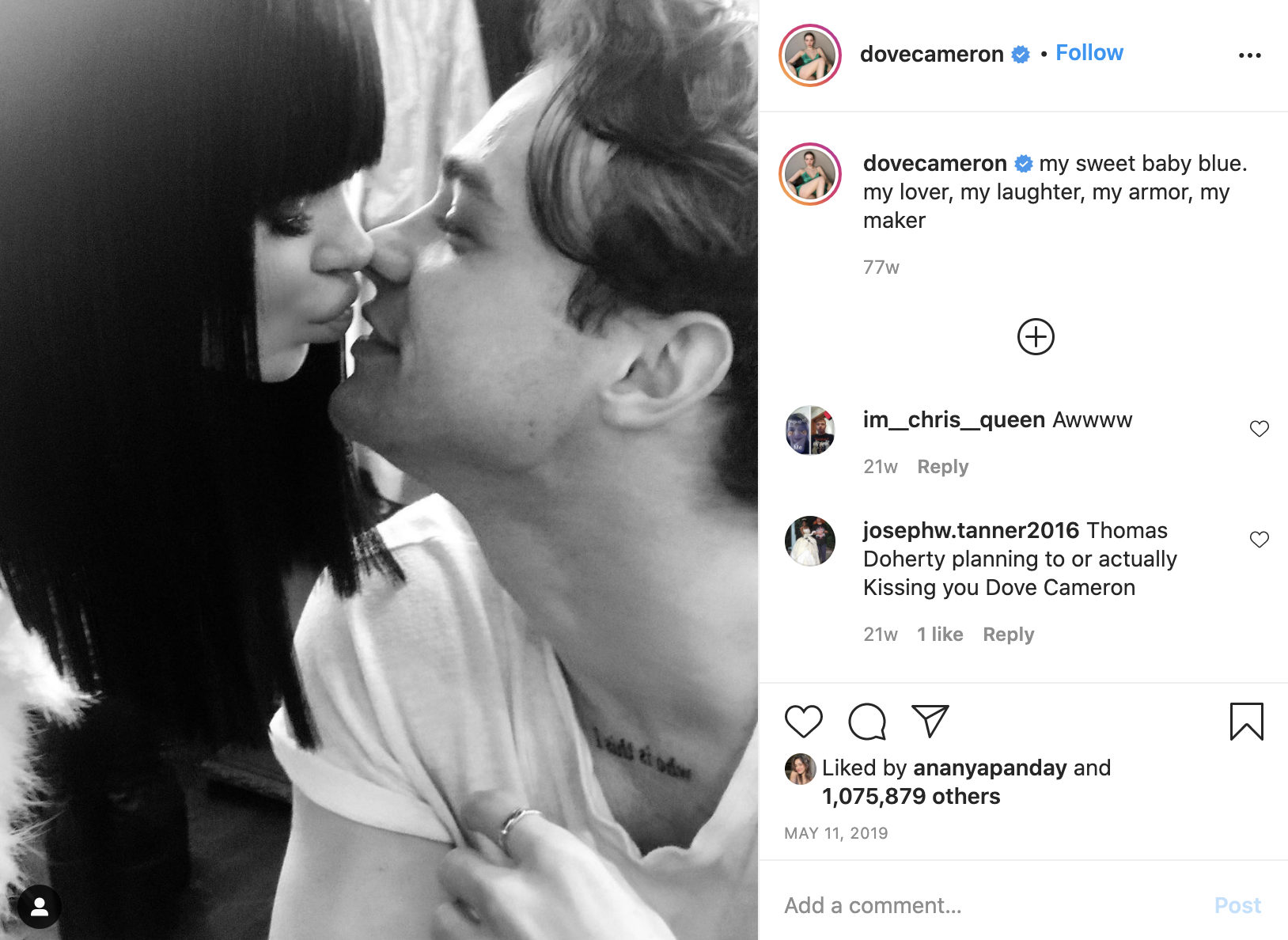 They dropped hints to their fans about the budding romance, sharing a cute Instagram video of the two “share(ing) food,” followed by Dove posting a shirtless picture of her beau. By February 2017, both officially announced their “committed” status and have been together ever since. The duo has tried to keep the intimate details of their amorous equation to themselves. But from time to time, their well-wishers get a sneak-peak into the cozy moments the two post on their social media accounts.

In November 2019, Dove even told a celebrity-news website that if ever she would decide to walk down the aisle, it would only be for him! The most astonishing and praiseworthy fact about them is that on the one hand, they are Hollywood stars establishing their independent careers and reaching new heights every day. But on the other, they are not letting their professional lives hinder their long-distance relationship. So what exactly happened that triggered the tittle-tattle about them having parted ways?

Are Dove and Thomas Still Together?

The fan-favorite couple has remained in the limelight since the start of their relationship. But the rumors about their separation began to float around only recently after Dove Cameron shared a picture of herself on Instagram with smudged mascara and teary-eyes. Her followers were quick to conclude that this was an indirect way of sharing the terrible news of her break-up with Thomas Doherty. But in the words of the star, she will be crying out loud with laughter at such a thought. 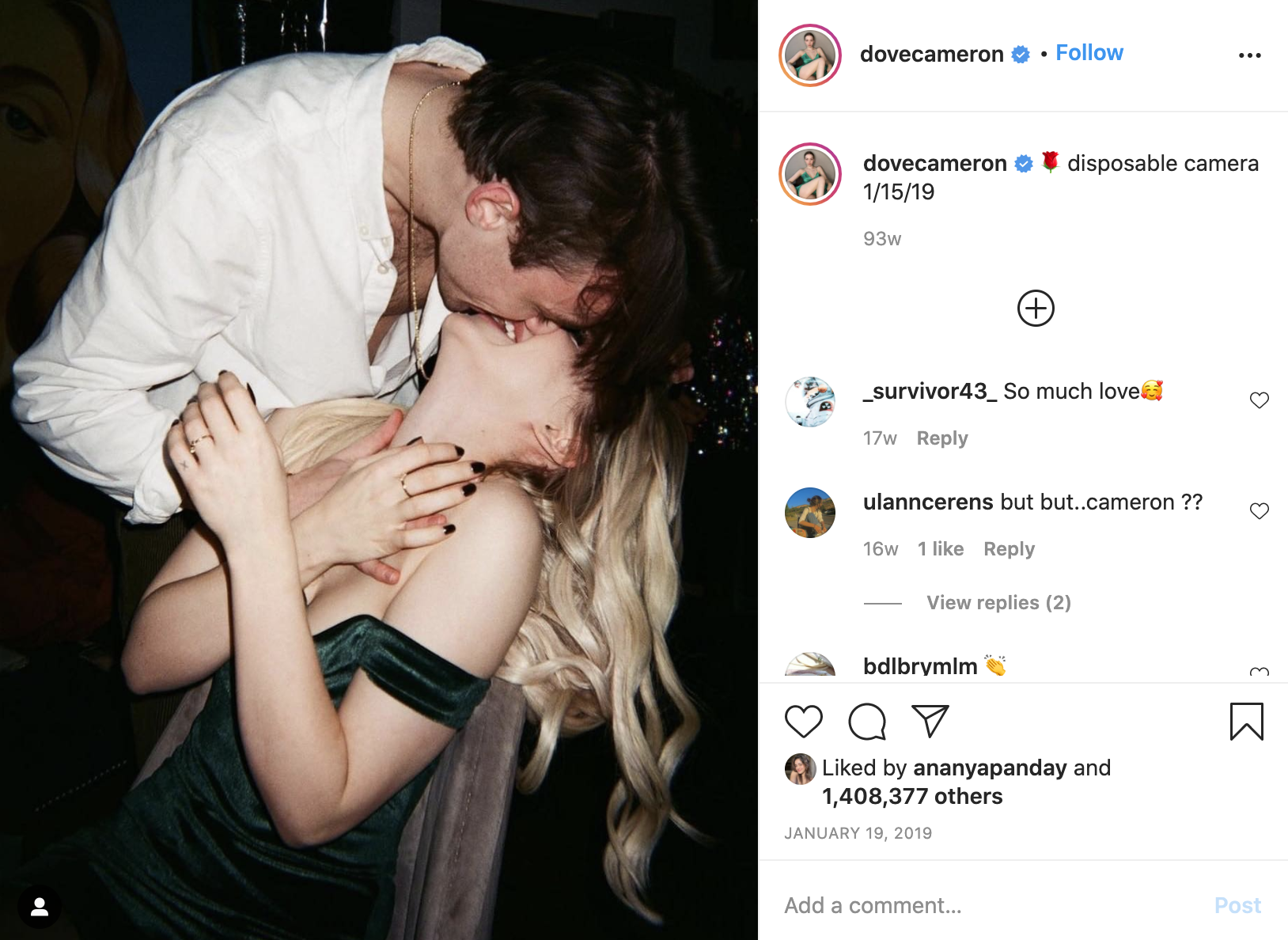 Thus, the speculation of her not being with the love of her life is reportedly baseless and far-fetched. She also shared with the PEOPLE how the two spent the quarantine together in a small loft-space. The end of the long-distance phase can only be a step forward, and they have surely taken that. Making sure to give each other breathing space, Thomas and Dove are going strong while cooking, eating, and making hilarious TikTok videos together.