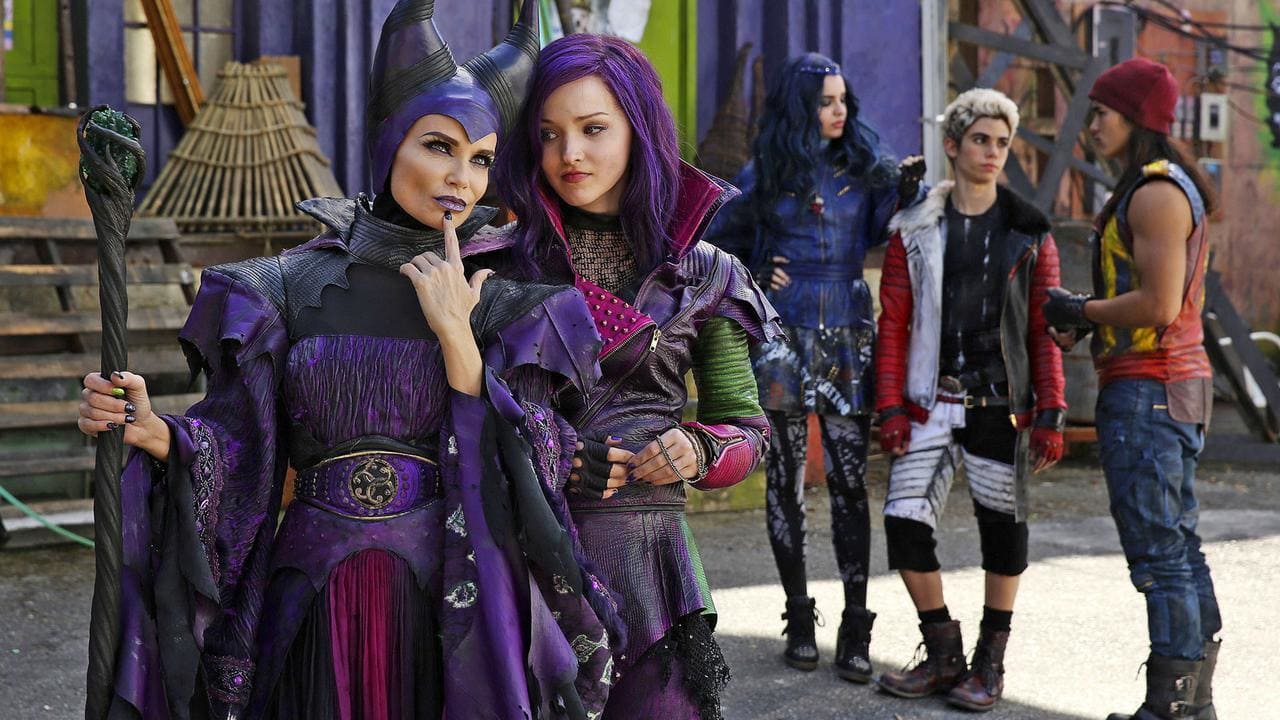 The influence of Disney on pop culture and the entertainment industry, in general, is staggering, to say the least. Having been around close to a century now, the media conglomerate has given birth to a host of characters, films, and TV shows which have become a huge part of our lives. Disney was the first to picturize fairy tales and give visuals to what children for generations had been imagining since time immemorial. Without any competitor during the early stages, Disney was able to create a universe crowded with characters from fairy tales, and on many occasions, we have seen them bring together otherwise unrelated characters and placing them within a narrative. This is what exactly happens in the 2015 musical fantasy ‘Descendants‘. Directed by Kenny Ortega (famous for the ‘High School Musical’ trilogy), the film incorporates characters from ‘Beauty And The Beast‘, ‘Snow White And The Seven Dwarfs’, ‘Sleeping Beauty’, ‘Cinderella’ and others.

Cruella de Vil’s (‘The Hundred And One Dalmatians’) son Carlos, Jafar’s (‘Aladdin’) son Jay, the Evil Queen’s (‘Snow White…’) daughter Evie, and Maleficient’s (‘Sleeping Beauty’) daughter Mal are the central characters of the story. When these four are granted a chance to live away from the Isle Of Lost where the evil Disney characters have been banished, they plot a coup with advice from Maleficient. This is a movie Disney fans will definitely love watching. It has some amazing music, and the setting takes you to a dreamlike world you’ve hardly seen or experienced anywhere else. With all that said now, here is the list of best movies similar to ‘Descendants’ that are our recommendations. You can watch several of these movies like ‘Descendants’ on Netflix, Hulu or Amazon Prime. 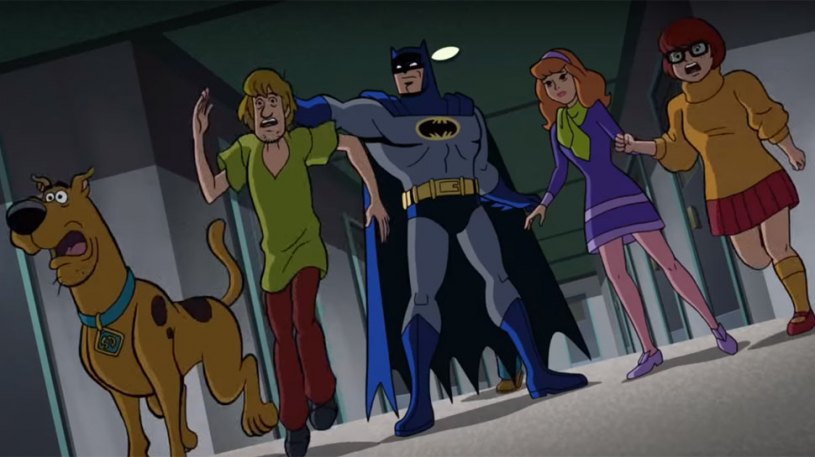 Just like Disney, Warner Brothers have also frequently produced direct-to-video films with the most famous characters in their oeuvre, sometimes crossing over other characters’ worlds. Batman, as we know, dwells in a noir-ish universe in Gotham, where the city itself is a symbol of the degradation in humanity. Now when Scooby-Doo and his friends arrive in this world, it brings a new charm to the entire setting, and fans who have loved both these franchises have a gala time seeing their heroes unite to defeat the common enemy.

The story of this film follows Mystery Inc. as they arrive in Gotham and are recruited by Batman to the elite group of crime solvers called Mystery Analysts. Besides Mystery Inc. and Batman, other members of the group include Question, Black Canary, Aquaman, and Plastic Man. When a bunch of vials with a radioactive substance gets stolen from Gotham Chemical Storage, it is the Mystery Analysts’ job to bring the perpetrator/s to justice. Some Scooby-Doo fans have complained that their favorite crime-solving group has been reduced to a supporting role in the film, but when teenagers team up with Batman, there is no doubt as to who will be leading the roost. 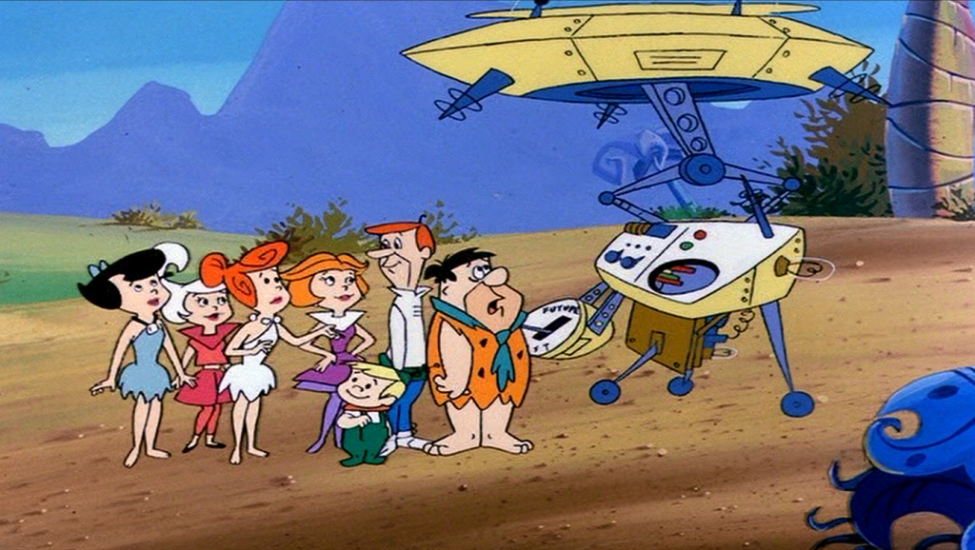 The Flinstones and the Jetsons are a match made in heaven. These are two families children have enjoyed watching as representations of the past and future, and when they come together, things are bound to get exciting. The Jetsons were first created as the Space Age Hanna-Barbera family in direct contrast to their Flinstones’ Stone Age setting. In this 1987 feature, they come together as the result of a botched time machine, with the Jetsons landing up in the Stone Age, where they meet the Flinstones and the two families instantly become friends. Despite the gala time that they have together, things take a turn for the worse when Fred and Barney get teleported to the future and fall into a tedious rigmarole while the Jetsons themselves are still stuck in the past. What is great about this film is that the humor which is typical to each of the two sets of characters has been fairly preserved here. Moreover, the similar problems they undergo when placed in a completely new setting is great fun to watch. 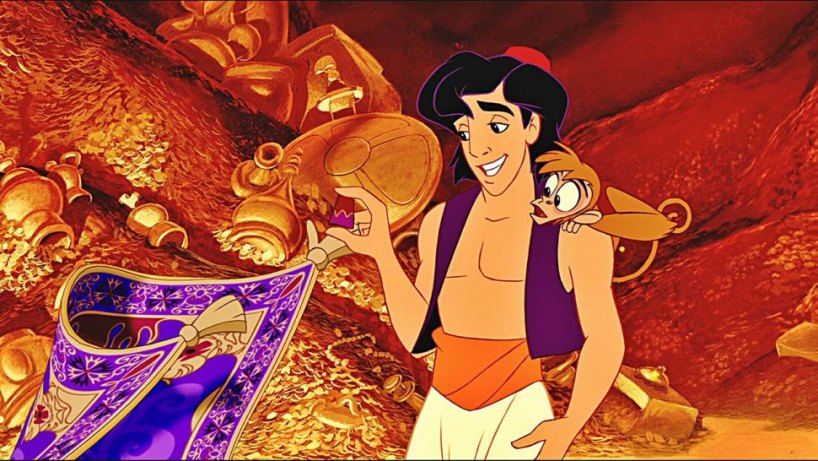 Without a shadow of a doubt, before ‘Lion King‘ released in 1994, ‘Aladdin’ was THE animated movie everyone was talking about. It was so fresh and different from the previous Disney films that everyone was forced to sit up and take notice. Before this film, Disney never quite acknowledged pop culture or anything else that was happening around the world at that point of time. But the casting of Robin Williams as the voice of the genie completely changed the atmosphere of Disney films. While playing the character, the legendary comedian threw in voice impressions of the likes of Robert De Niro and Jack Nicholson and also brought about a self-referential aspect to the film, which made it distinct in style from the other animated movies which came out during that period. Watch it for the richly colored animations, the strong humor present throughout the film, and of course, Robin Williams! 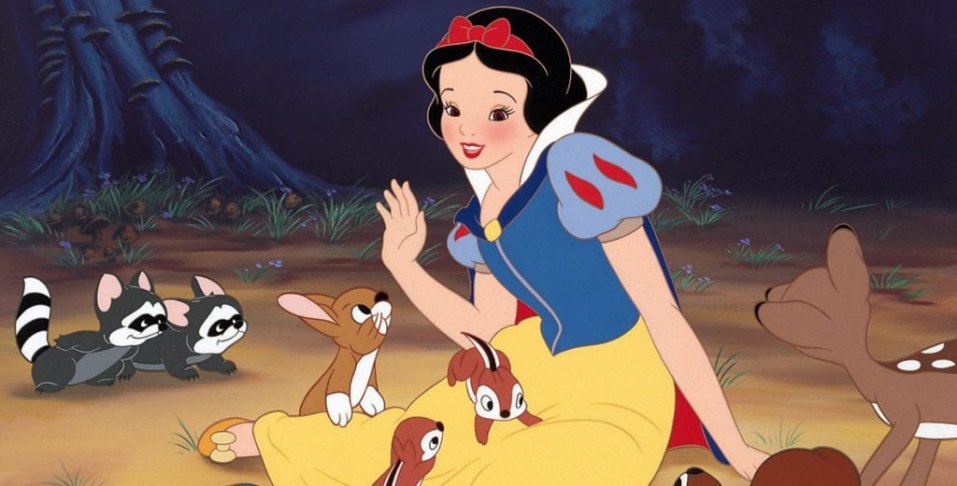 ‘Snow White And The Seven Dwarfs’ is the single most influential animated film in history, for this is the first full-length feature film made in this format. Walt Disney sent ripples across the world with this magnificent creation of his. The Academy presented him with a normal-sized Oscar statue and seven miniature ones to commemorate the occasion. The film has spawned theme parks, video games, a Broadway musical, comic book adaptations, and so on. When ‘Snow White And The Seven Dwarfs’ first released, it received high praises from the pioneers of cinema itself like Sergei Eisenstein and Charlie Chaplin. If you love animated films and have still not feasted your eyes on this gem of a movie, you are doing yourself a massive injustice. 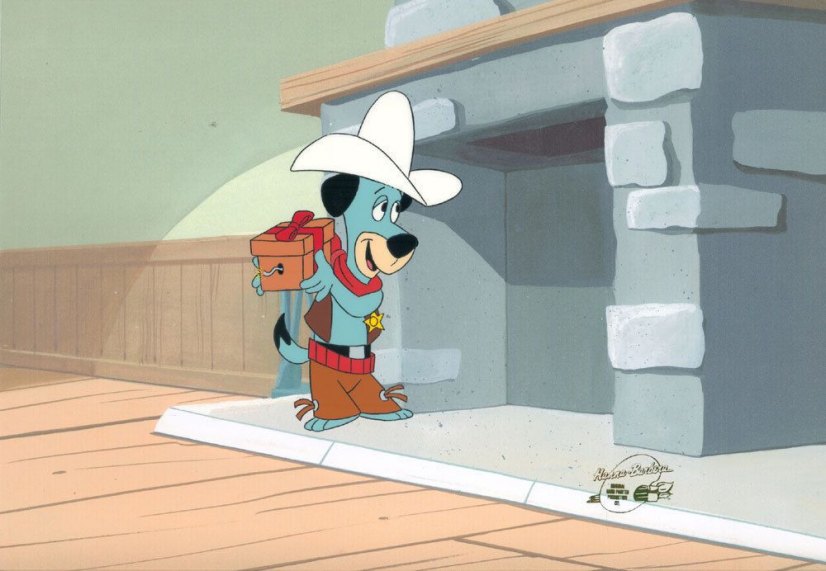 Animation, in many ways, has broken a lot of grounds and produced works which could’ve never been possible in any other medium. Let us consider the film ‘The Good, the Bad, and Huckleberry Hound’ to prove our point. The name of the film is a spoof on the Sergio Leone masterpiece ‘The Good The Bad And The Ugly‘ (1966), and the entire film is a spoof of various styles and elements used in western movies. The story follows Huckleberry Hound as the man (dog?) with no name who immediately gets into trouble with the outlaw gang called the Daltons on entering a town called Two-Bit in the American Old West. It is his journey of several stumbling blocks to reclaim the town from the Daltons which becomes the central narrative of the film. In ‘Descendants’, we deal with characters from different fairy tales who come together, but here we witness a mashup of two strikingly different film genres which are brought together to tell a beautiful story of courage and love. 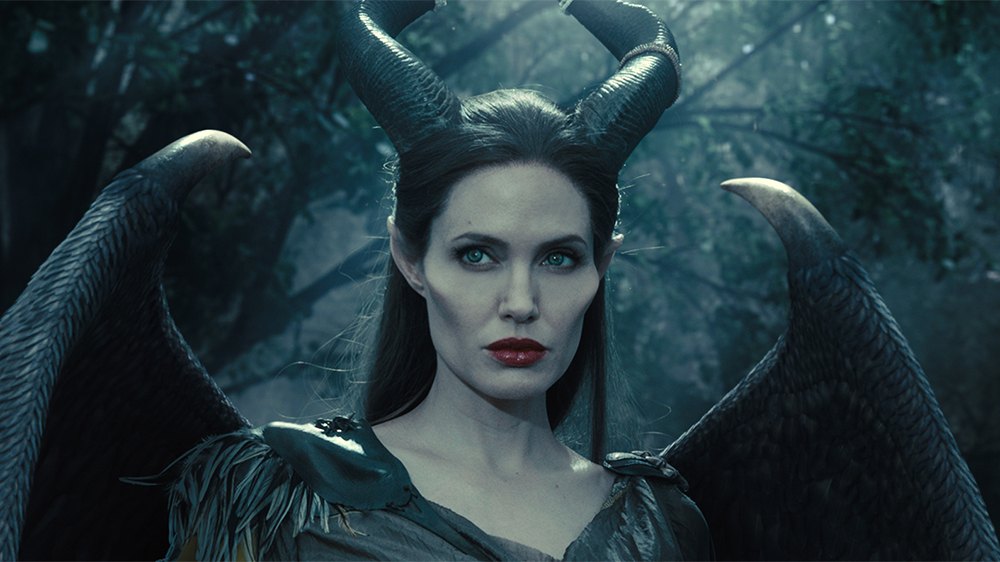 Those of us who have read ‘Sleeping Beauty’ or have at least watched the 1959 film know who Maleficent is. She’s the antagonist of the story; the evil fairy who curses Aurora during her christening. The 2014 film ‘Maleficent’ is a retelling of the same story, but from the perspective of the eponymous central character. We come to know that Aurora’s father had a romantic relationship with Maleficent when they were younger. But later he betrayed Maleficent and cut her wings when King Henry announced that anyone who can kill Maleficent will become his successor and marry his daughter, Princess Leia.

This is a revisionist approach to a well-known fairy tale which has always projected Maleficent as a malicious fairy with no reason for causing harm to Aurora or his father. Angelina Jolie‘s performance in the leading character is simply stunning, and can easily take your eyes off the excessive use of CGI. With Maleficent’s advice playing a key role in ‘Descendants’, it is rather necessary to take a look at this film if you want to strengthen your perception about Maleficent as a character. 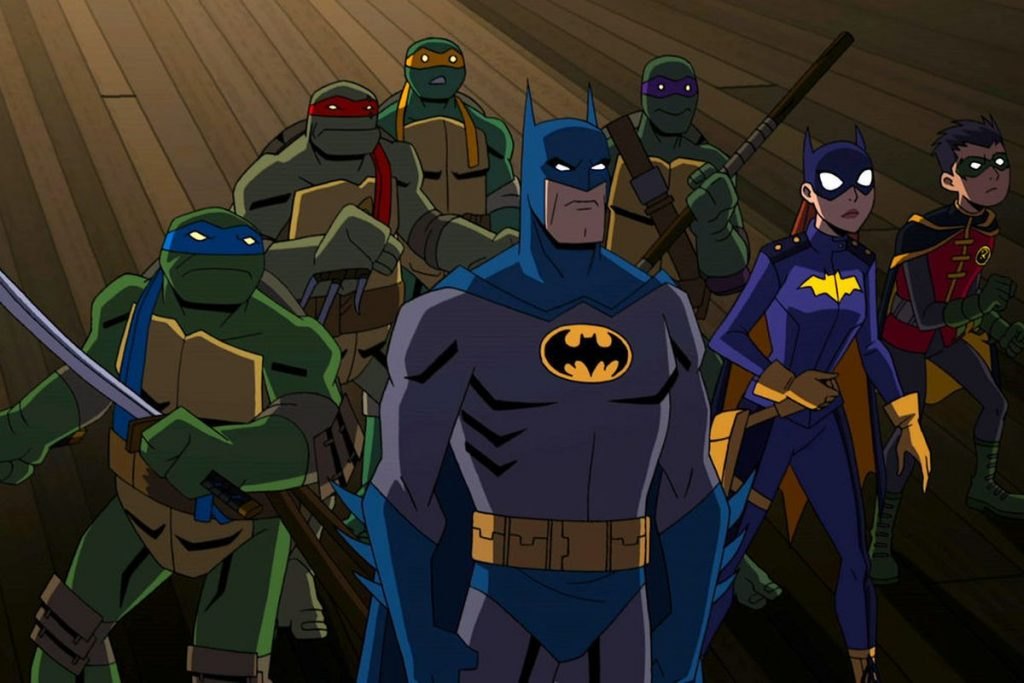 Another crossover from Warner Brothers, in this 2019 film, we see the Dark Knight teaming up with the Teenage Mutant Ninja Turtles to defeat enemies from both their worlds who have joined forces to unleash terror upon Gotham. Despite Batman and the Turtles starting off on the wrong footing at first, they soon realize they are fighting one common enemy and join hands almost immediately. Besides Batman, Robin and Batgirl are the other famous characters who join the Turtles in ridding Gotham of the evil that has been plaguing the city. Any fan of both these franchises will love watching this film, as it wonderfully captures the best of both worlds and presents to us a story that is well thought-out and effective.