Are Gretchen and Slade From RHOC Still Together? 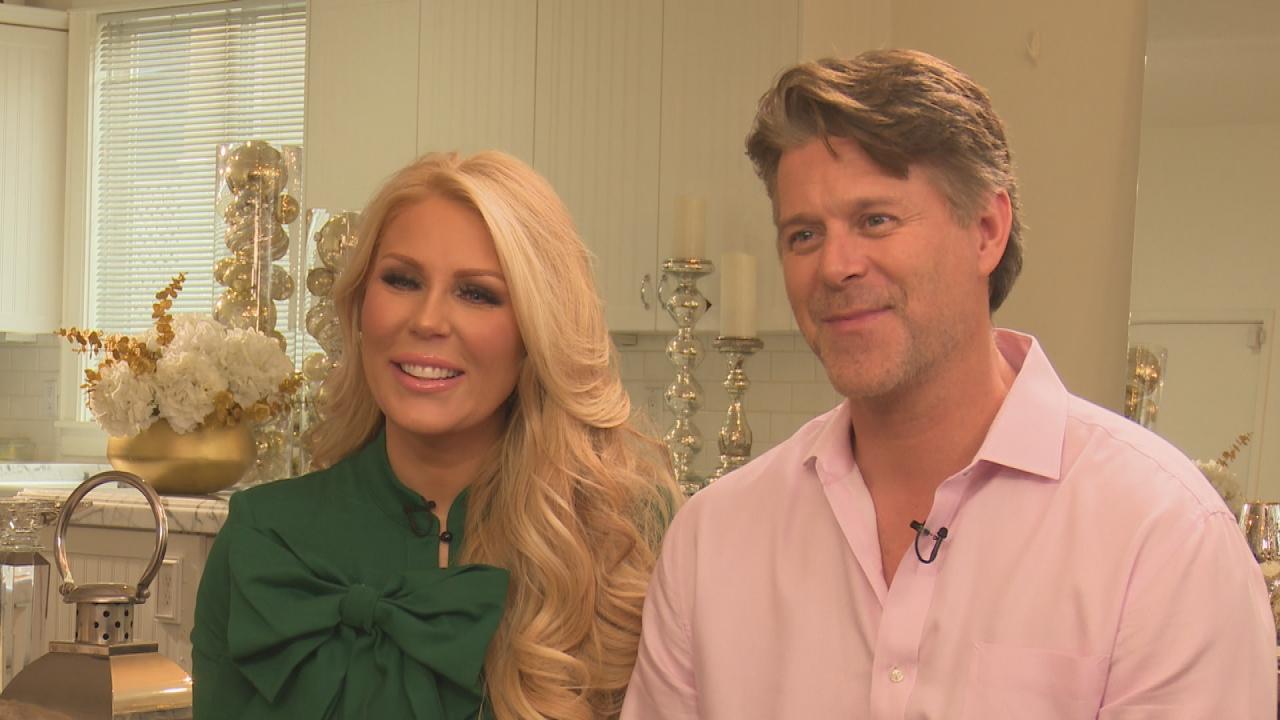 Bravo TV’s ‘The Real Housewives of Orange County’ — commonly referred to as ‘RHOC’— has retained the interest of viewers for almost 16 years and is still a popular show. Since its debut in March 2006, it centers on the private, social, and professional lifestyles of a group of wealthy women living in Orange County, California. The show provides some really dramatic and enjoyable entertainment that is the ideal guilty pleasure for fans of reality shows. Over the course of 16 seasons, the show has featured some fascinating individuals whose rich and dramatic lives have kept the viewers interested for so long.

Gretchen Rossi, who appeared on the show from season 4 through season 8, is one such Orange County housewife. Her affluent yet gentle personality and her eventual relationship with Slade Smiley made her fans even wish for their return on the show for the later seasons. Now that they have been away from the show for so long, viewers must be wondering about the current status of their relationship and their whereabouts. If you’re curious to know about them, too, we’ve got your back. Here’s what we found out!

Gretchen Rossi began her journey in the ‘The Real Housewives of Orange County’ season 4 in 2008. Prior to that, Gretchen had been on a roller-coaster of relationships that included her marriage to Chris Rossi, a Hollywood producer and screenwriter, which lasted 3 years, from 2004 to 2007. Then, at the time of her entry to ‘RHOC’ in 2008, Gretchen was engaged to entrepreneur Jeff Beitzel, who was 24 years her elder. Sadly, Jeff was already fighting leukemia and succumbed to the disease in September of the same year. After that, Gretchen had her focus entirely on the show and her charity works related to cancer. 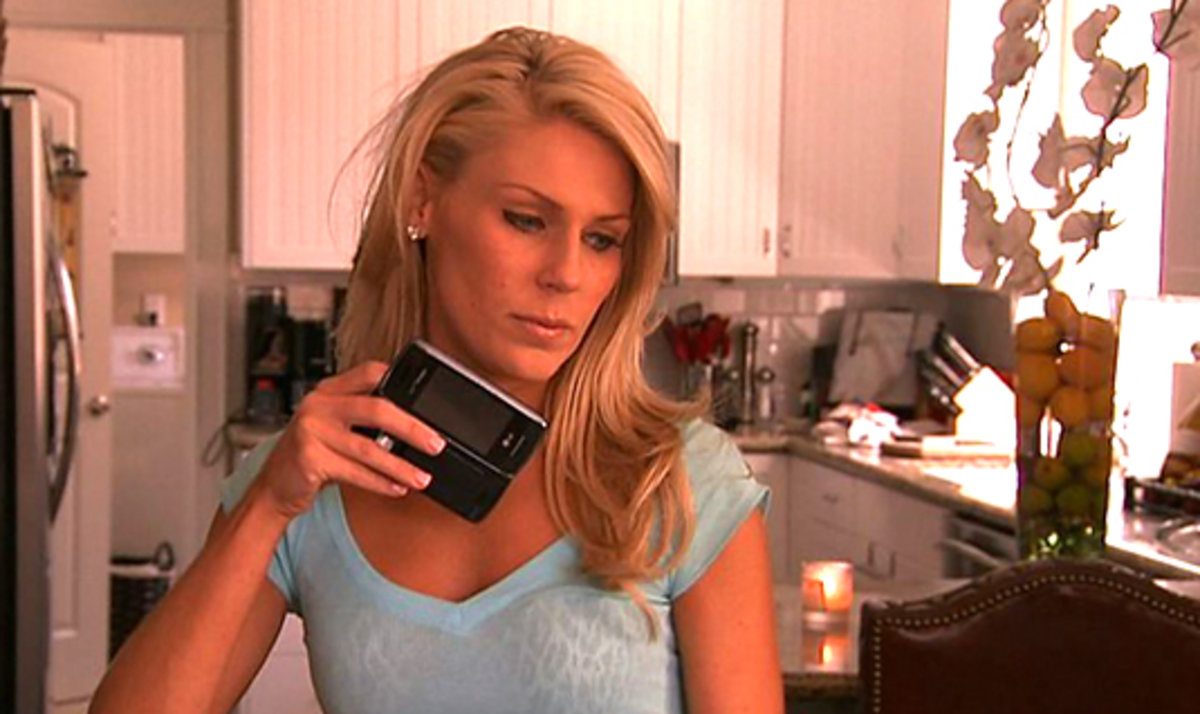 Slade Smiley entered the reality show in season 1 as the fiancé of ‘RHOC’ star Jo De La Rosa, but they later broke up, and Slade then dated another ‘RHOC’ star, Lauri Peterson. Their relationship ended after a while. Gretchen and Slade’s started dating sometime in February 2009, and Slade made his return to the show in season 5. However, many cast members questioned Slade’s intentions of dating Gretchen, as they believed he wanted to be with her only for her money. Slade also has two sons from his previous relationships and was reportedly in some debt regarding some unpaid child support on his part. 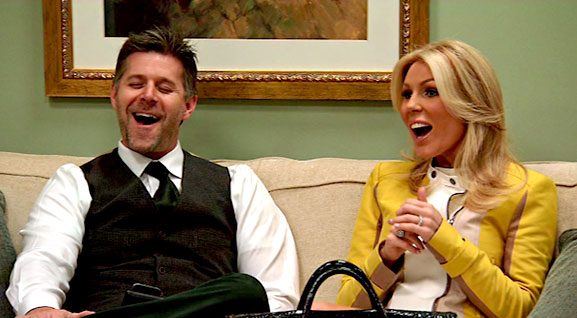 However, the couple didn’t pay heed to any negativity and quickly developed feelings for each other after spending quite some time together. They kept their relationship going for the forthcoming seasons as well. After dating for three years, when asked about their status and future plans, Gretchen mentioned having some doubts because of Slade’s debt situation. Although she was hesitant to plan a future with him and get married, she reiterated that she still loved him dearly and was supportive of his decisions. Gretchen affirmed that after meeting Slade, she fell in love with him, not his money.

Therefore, after a year of speculations and doubts, Gretchen made a bold move in the season 8 finale in 2013, when she decided to propose to Slade, making a grand gesture by writing him a song. She popped the question, saying, “What matters to me more than anything is you, and that I love you. You are the person I want to be with for the rest of my life, and I was allowing my past to get in the way of my future … And you are my future.” Slade emotionally replied to the lovely proposal by saying, “It would be an honor and a privilege to have you be my wife.”

This proposal marked the departure of the couple from the show, as Gretchen did not return for the show’s ninth installment the following year. They preferred to begin their new journey afresh, away from the limelight, and take the next steps. Now that the couple has been away from your screens for so long, are they still together, or have they gone their separate ways? Here’s what we know!

Are Gretchen and Slade Still Together?

Yes, Gretchen and Slade are still together. After exiting ‘RHOC,’ the couple appeared on the reality show ‘Marriage Boot Camp’ in 2014 for a brief period to discover their chances of getting married. Post that, they did set up a wedding date for May 23, 2015 — which they revealed on ‘Watch What Happens Live With Andy Cohen’ — but could not go through with it because of Slade’s urgent work commitments. The couple, however, kept going strong together, dismissing all the doubts people projected at them for not getting tying the knot.

Eventually, Gretchen and Slade turned their focus on starting a family and decided to have a child once Slade underwent his vasectomy reversal. However, after a few years of failed trials through the natural way, the couple opted for IVF, and Gretchen finally announced her pregnancy in December 2018. In February 2019, the charming couple also celebrated 10 years of togetherness. They constantly express gratitude for the times they shared over the years and are big believers of God and his blessings on them. The couple welcomed their first child, an adorable daughter named Skylar Grey, on July 10, 2019.

Gretchen and Slade have been having a gala time with their daughter and other family members, including Slade’s sons. When asked about their wedding plans even now, Gretchen simply says that they will do it if and when they feel like it. With so much focus on the kids and their individual businesses, they seem to be too occupied to plan a grand wedding. Explaining their current situation on ‘Watch What Happens Live with Andy Cohen,’ Gretchen said, “I wear a ring like he’s my husband. He wears a ring. We call each other husband and wife. It’s just, we don’t have a legal paper that says it.”

She further added, “I would want to do it more for just, like, having the pictures and having, like, the big party, you know what I mean? Rather than feeling like, ‘Oh, we have to, like, be married to be committed to each other”. Well, whenever the couple decides to get married or if they at all do it or not, we are sure Gretchen and Slade have the love and support of all their fans, and honestly, that’s all that matters.

Read More: Are Jen and Ryne From RHOC Still Together?