Where is Ashley Randall From My 600-lb Life Today? 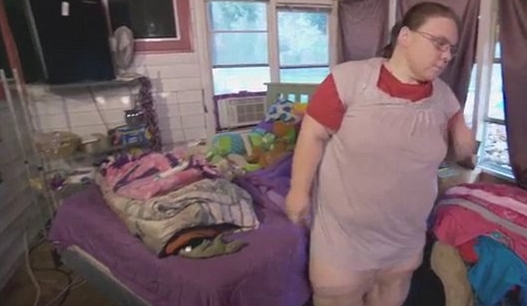 ‘My 600-lb Life’ on TLC recounts several journeys taken by morbidly obese participants who wish to lose some weight before being greenlit for surgery. Dr. Now is with them every step of the way and his careful supervision and guidance help the members stick to the diet and exercise plans. There are some success stories and some tragic endings. On the other hand, some cases show that even if losing weight is not hard, maintaining that weight loss requires constant effort. This is a situation that Ashley Randall is all too familiar with. So, where is she now?

Ashley appeared on the show in 2012, chronicling her weight loss between 2004 and 2011. She revealed that she lost her father to cancer, after which her mother moved in with Megan, her younger sister. Meanwhile, Ashley started living with a friend. The mother and daughter tried to work on their relationship in the wake of their father’s death but Ashley believed her mother gave her a hard time about her weight.

She decided to mend her relationship with her mother and get over the habit of overeating. When she first appeared on the show, Dr. Now stated that she was intaking 3,000 calories each day. She tipped the scales at 617 pounds when she appeared on the show at the age of 24. The participant said that she ended up losing over 400 lbs ultimately, and was proud of her success. She felt that her father, who was always in her corner, was a motivating factor on her journey. Eventually, she reached 253 lbs, later losing 37 pounds on her own.

However, her amazing start soon came to a lull, when Ashley found that her weight loss had stalled and she couldn’t get the skin removal surgery which would have changed her legs. It was a part of her body that she wanted to alter, and after losing the motivation Ashley stopped visiting Dr. Now and even slacked off in her program. After Ashley went to visit the doctor for the first time in three years, she learned that she had gained a fair amount of weight and hit 312 lbs on the scales.

Dr. Now advised her to lose 30 pounds by their next meeting but Ashley was only able to lose 2 lbs. Not one to mince words, the good doctor immediately told her that if she did not get back on track Ashley would be right back where she started. As a result, the participant turned to her mother for help. The two mended their relationship and went on long walks together, besides preparing healthy meals for themselves. After six months, she had shed 40 lbs and weighed 272 pounds. Dr. Now advised her to try and go under 200 pounds to qualify for a skin removal surgery on her legs. Here’s Ashley with her mother.

Where is Ashley Randall Now?

There is not much information about Ashley’s current whereabouts or whether she went through with the skin removal surgery. Her profile states that she lives in Killeen, Texas. You can also check out a recent picture from Ashley, which shows that she has patched things with her mother, and though she’s far from her dream weight, there is good reason to believe that the alum remains motivated on her journey.

Read More: Where is Paula Jones From My 600-lb Life Today?