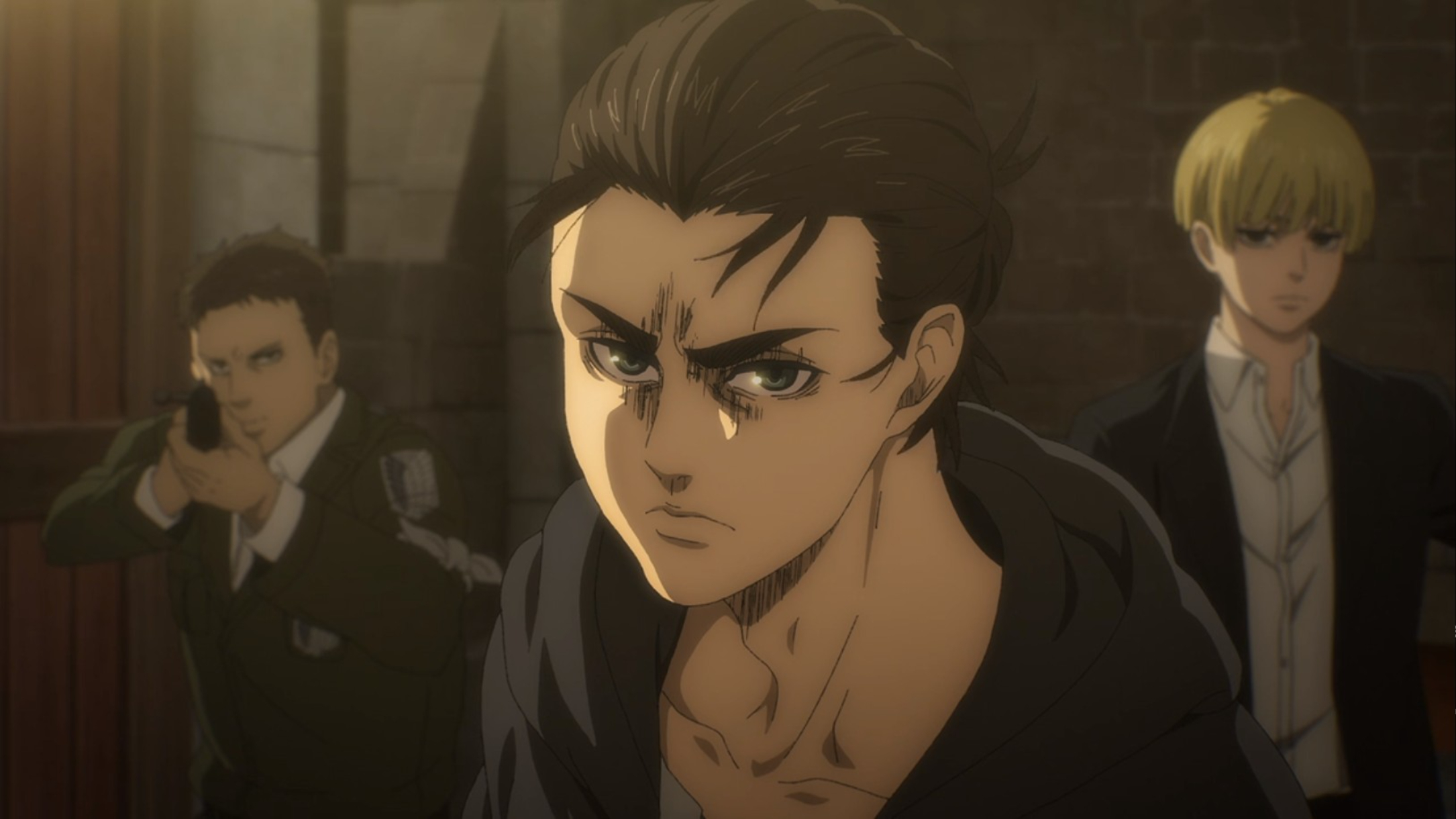 ‘Attack on Titan’ season 4 episode 16 truly packs a punch, especially when you consider that it is supposed to be the finale of “part 1” of the season. As the conflict between the two nations progresses, several loyalties seem to change as per everyone’s convenience. Not only does Yelena discuss Zeke’s plan that will “save the world,” but Marleyan Warriors also make their way to the island. So now, if you’re itching to dissect the ending of the episode, then we’re here to go through numerous theories with you. SPOILERS AHEAD.

In the wake of the explosion, a titan approaches Zeke and pushes him in its stomach. Yelena uses the leveraging power of the spinal fluid to get Commander Pyxis and the Paradis military to “cooperate” with her. The rest of the Scouts are imprisoned, with most of them believing that Eren has completely lost his mind. However, when Yelena and her comrades approach the Scouts, and Greiz refers to Sasha as “that spawn-of-the-devil whore,” she shoots him.

Yelena then proceeds to tell the Scouts about Zeke’s euthanization plan. Eren approaches Gabi and asks for her help. Pieck has managed to infiltrate the Paradis military and finds Eren. She wants to become a part of Eren’s mission and crush Marley. This destroys Gabi’s belief system in the process. To prove her worth, Pieck offers to reveal the location of her comrades to Eren as well.

Attack on Titan Season 4 Episode 16 Ending: Will Eren be Defeated?

As Yelena and the scouts discuss the finer details of Zeke’s plan, she is informed that Paradis Island has been infiltrated. When Eren takes Pieck to the roof so that she can expose the enemy, she seemingly points to Eren, which is when Porco transforms into the Jaw Titan and ascends from the ground. Consequently, Eren is forced to transform as well. Gabi realizes that Pieck is no traitor and airships with Commander Magath and Reiner onboard approach their location. 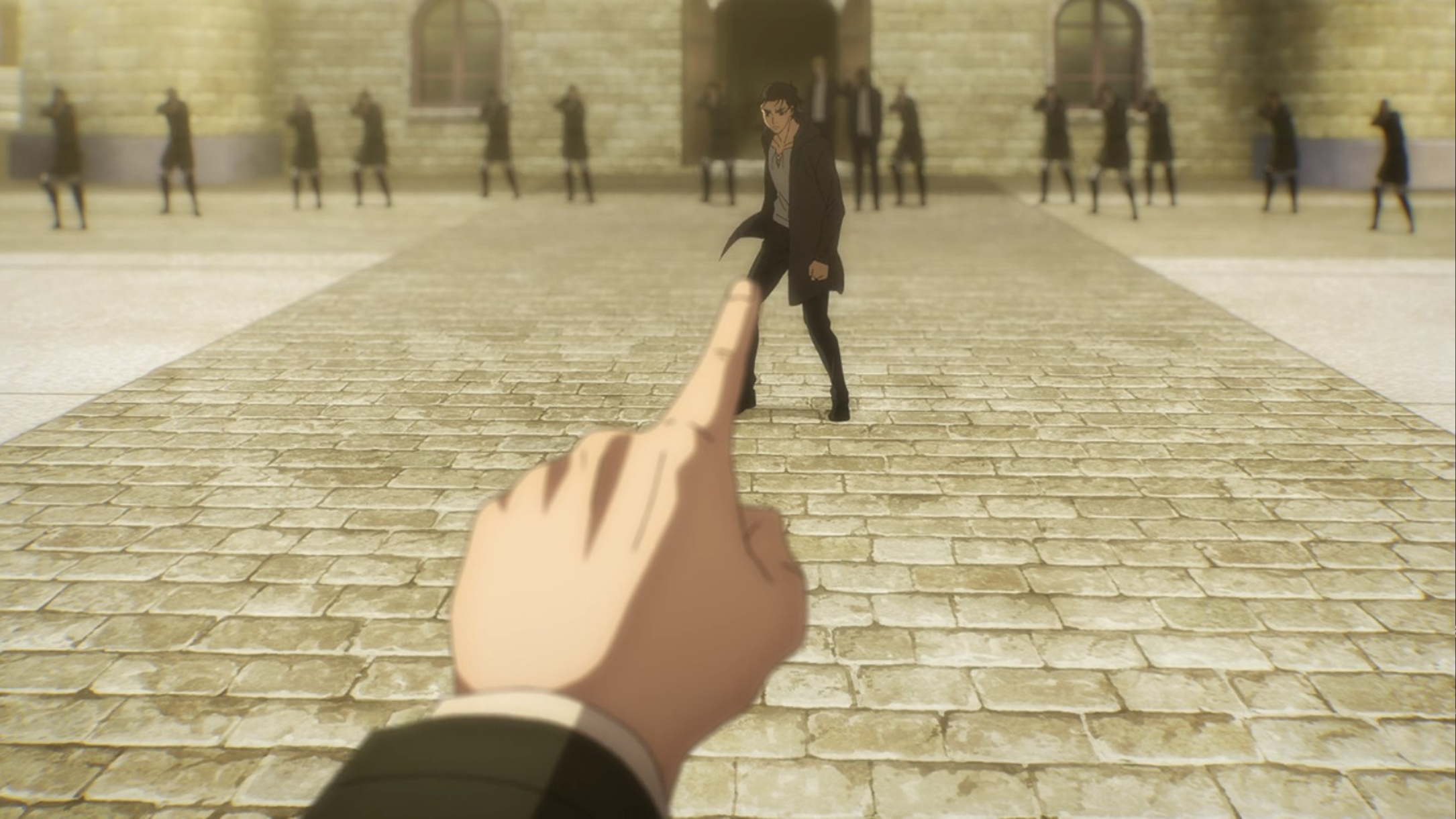 At this point in time, the credits start rolling. The ending seems to be a very obvious nod to a previous scene in the season when Eren attacks Liberio. There, too, Eren, Reiner, Zeke, Pieck, and Porco have an epic showdown, with the Scouts coming to aid Eren. Even in that scenario, it seemed as though all hope is lost for Eren. But eventually, he is the one who prevails. He even manages to take the War Hammer Titan away from Marley.

If this previous instance is an attempt at foreshadowing, then suffice it to say that Eren will not be on the losing side this time either; there is no need to underestimate him. That is not to say that the Marleyan Warriors will be beaten so easily. After all, for Zeke and Eren to carry out their wish, they need to come in contact. Their plan can only work when the Founding Titan and a titan of royal blood are touching each other. This can lead to them altering reality, giving them a god-like status.

All Reiner and his team need to do is avoid this, and they will momentarily gain the upper hand. Plus, this time around, Eren does not have the support of his beloved friends. From the manga, we know that Eren is eventually rescued by Zeke and that further leads to some massive truth bombs exploding. Given that Zeke and Eren are colluding, it is only natural that, at some point in time, the soldiers of Paradis Island and Marley will also work together to subdue the threats posed by the half-brothers. 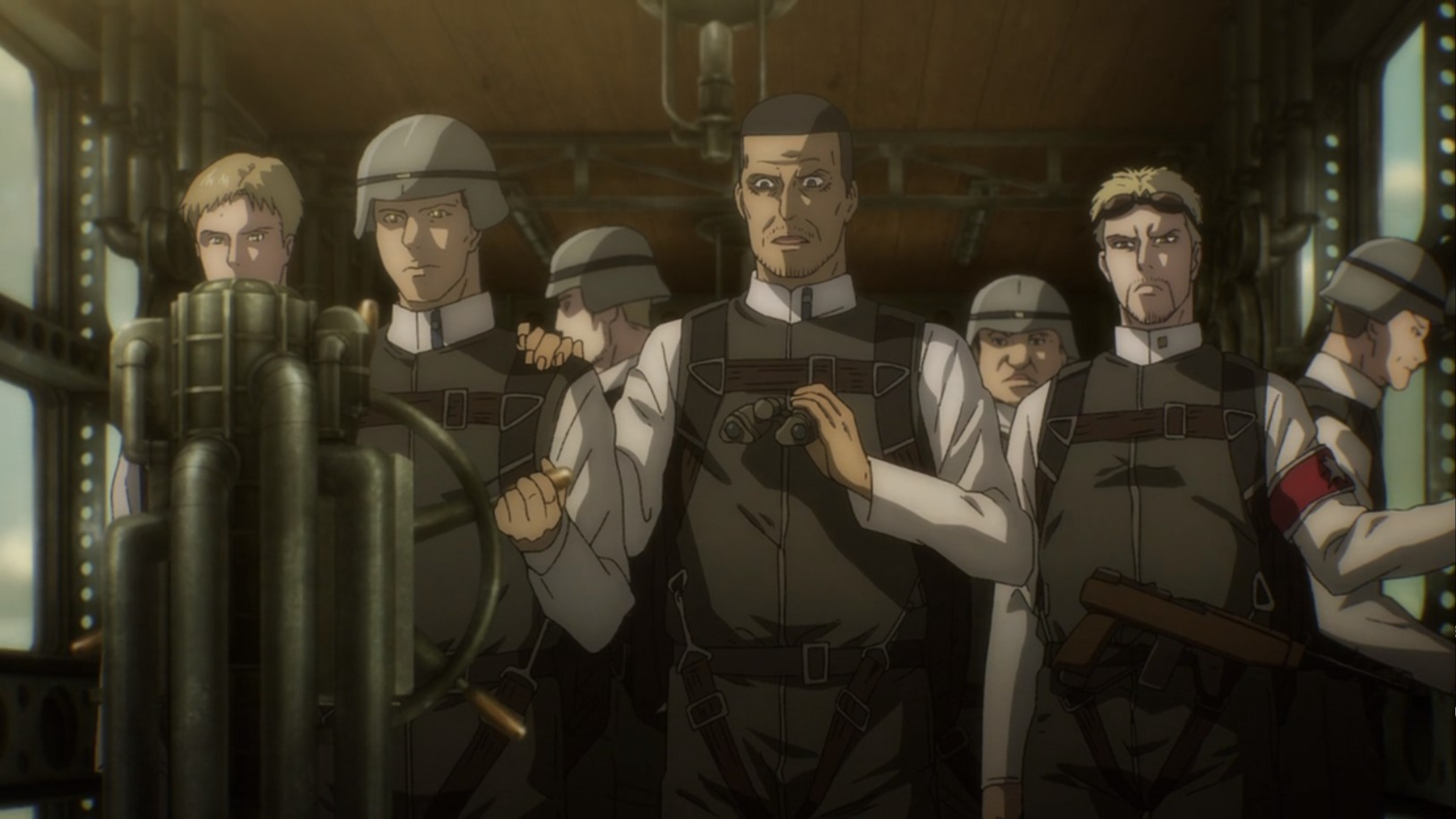 In fact, the manga very clearly reveals this fact to us as well. So, at least at this point in time in the anime, it seems obviously clear that Eren will not gain the upper hand anytime soon. There’s also the inevitable and impending double-cross that we can expect from Eren any moment now, and that will reveal whether Zeke or Eren reigns supreme. Will Eldians be euthanized? When will the Rumbling be activated? What are Eren’s ulterior motives? This is still left to be seen. One thing is for sure: neither side will give up without a fight.

How Will Zeke Use the Spinal Fluid to His Advantage? What Will Happen to Paradis Island’s Military?

It is hard to ascertain what is in the future for the characters. After all, Marley has finally launched their attack, something that Eren and Zeke were not really anticipating. Plus, the element of surprise is not to be undermined, especially in war. It definitely seems as though the battle is in Marley’s favor, especially when you consider that the people on Paradis Island are split into two factions – those loyal to the military, such as Hange, Armin, Mikasa, and Jean, and those loyal to Eren, such as Floch. 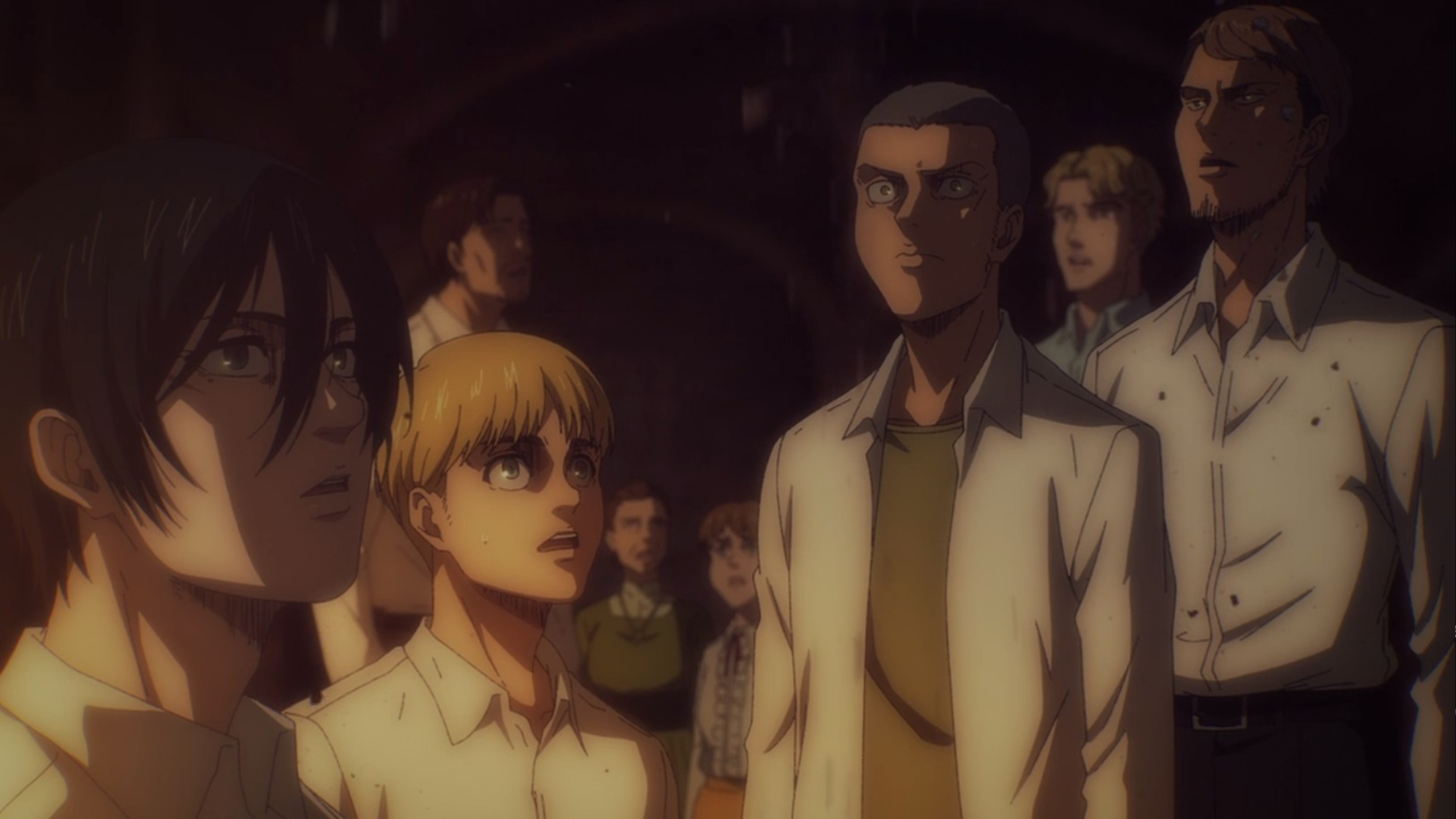 So first, Paradis must fight this internal battle before they can even think of taking on Marley. After all, there is a certain strength in numbers. Plus, with most of the military under Yelena’s command, who herself is very loyal to Zeke, it seems almost implausible that most of the soldiers will ever regain their freedom. After all, they are just a bargaining chip. Why else would Zeke have made them ingest his spinal fluid? He will definitely use his power to transform them into Pure Titans at some point in the future.

From this, we can conclude that the strength of Paradis’ military will be cut by more than half. Apart from a few key players, almost all Paradis soldiers will certainly be used by Zeke as a part of his masterplan. In fact, it seems as though Zeke will turn them into titans around the same time that he will activate the Rumbling as well. The soldiers, in titan form, will turn on their fellow comrades and cause chaos, which is quite reminiscent of the earlier seasons of ‘Attack on Titan.’

What Will Happen to Falco?

Falco is used as a bargaining chip by Eren when he goes to Gabi for her help. With everything that Gabi has seen since coming to Paradis, it is safe to say that her entire belief system has been shaken to the very core. After all, the very people that she has seen as “devils” (due to a system of rigid brainwashing in Marley) have been nothing but kind and compassionate towards her. But the one constant through it all has been Falco. 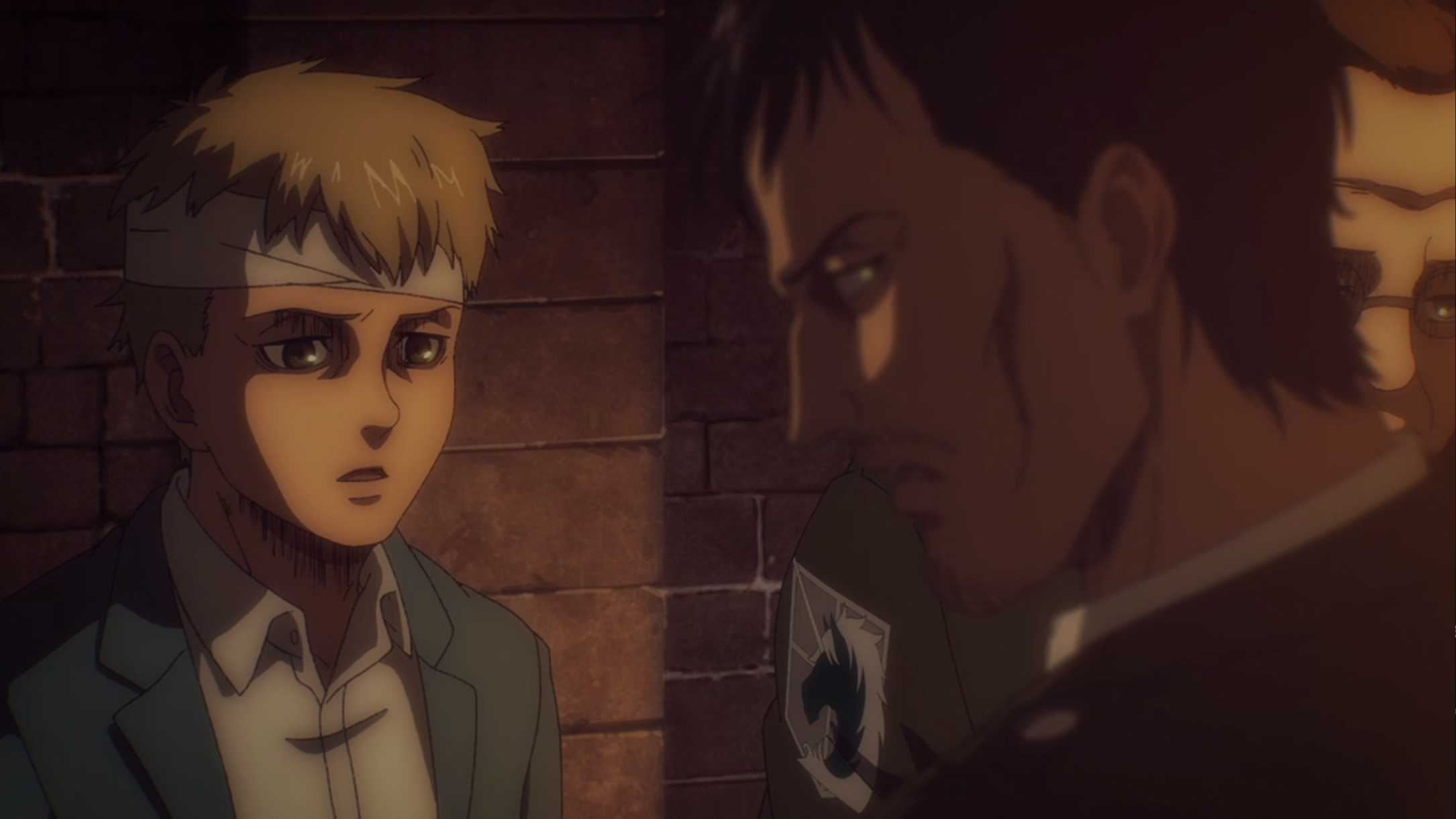 Even though he has ingested the wine with Zeke’s spinal fluid, Falco is presently okay, as we see him in a hall with other captives. But a recurring motif in the episode is the wine, and let’s be honest, it has given Zeke and his allies tremendous control over Paradis Island. So, it’s quite clear that Zeke will use his power at some point in the future, and Falco will also be transformed into a Pure Titan against his will. But given that he is a major player in season 4 of the anime, it is quite evident that he will go on to inherit one of the bigger titans eventually.