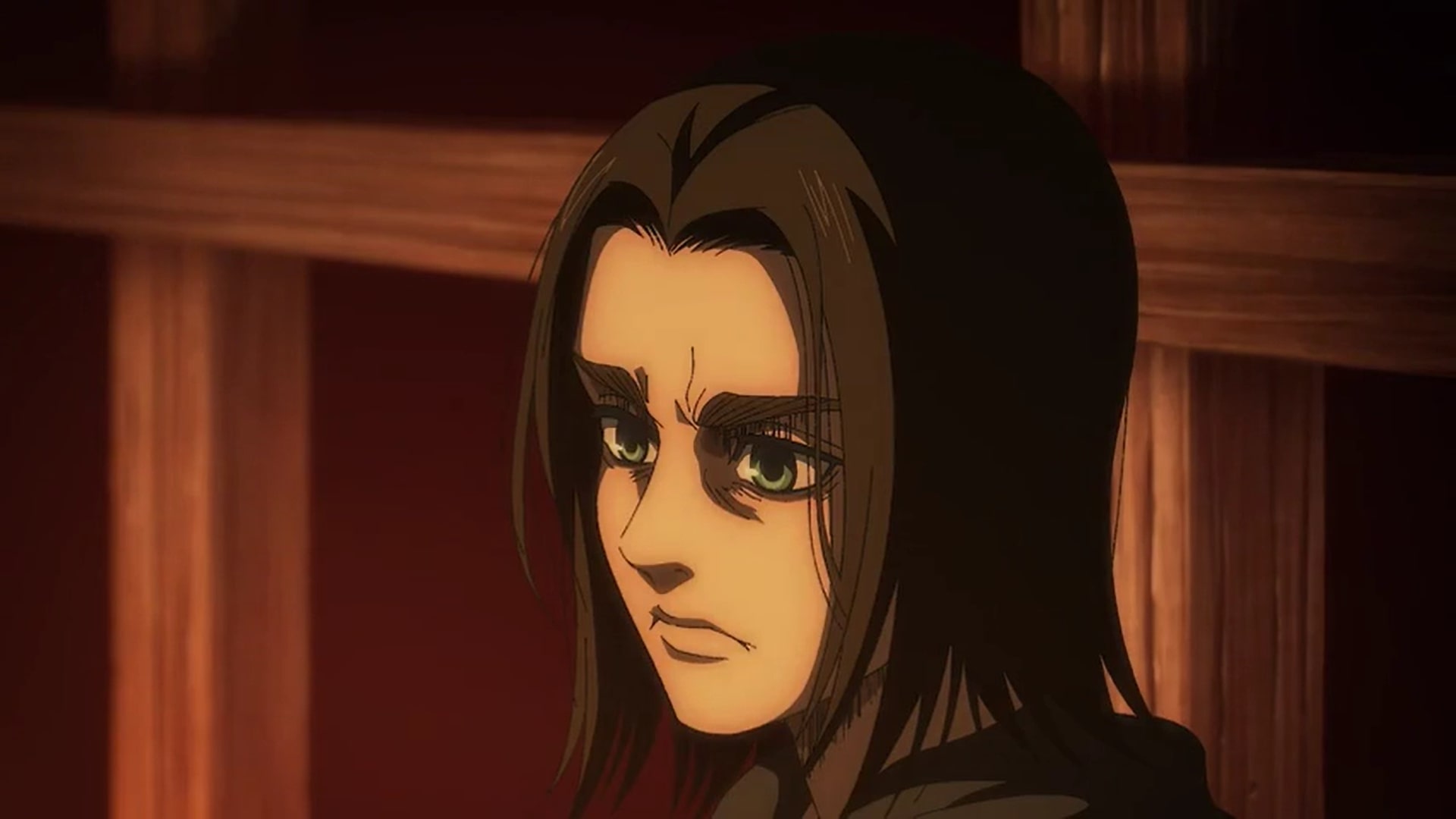 The 20th episode of ‘Attack on Titan‘ season 4 focuses entirely on the memories of Grisha Yeager, Eren’s father. Zeke is curious to learn what motivated Eren to betray him, and he thinks that their father has probably manipulated and influenced him from a very young age. The holder of the Beast Titan has no respect left for Grisha Yeager, as he thinks that his father was a depraved man who could easily sacrifice his family for the restoration of Eldia. However, as they go through every single memory of Grisha Yeager, Zeke’s opinions are challenged. Here is everything you need to know about the ending of ‘Attack on Titan’ season 4 episode 20. SPOILERS AHEAD!

After revealing that he has acquired the powers of the Founding Titan from Ymir, Zeke takes Eren through the memories of Grisha Yeager. He thinks that it was their father who manipulated Eren from a young age, which eventually made him betray his own half-brother. In order to be sure of the origins of Eren’s nationalism and his unforgivable actions following their arrival in the Coordinate, the holder of the Beast Titan feels that he should just let his brother see Grisha’s memories so that Eren can finally find the truth for himself. 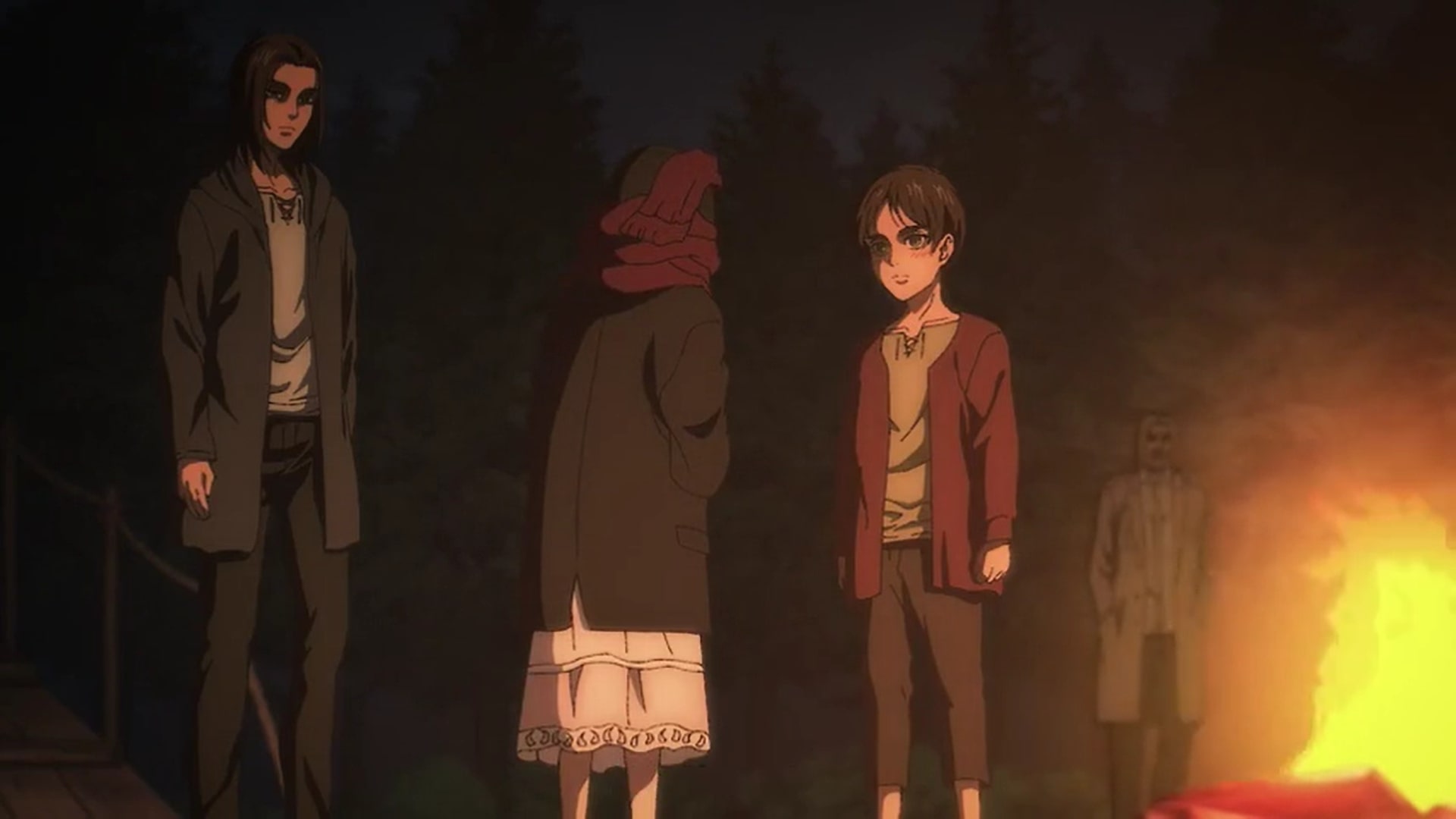 Zeke shows Eren how Grisha used his high-status job as a doctor to build relationships with people in positions of power so that he could eventually use it to his advantage. Zeke’s analysis initially seems accurate, and Eren even agrees to his conclusions just so his brother will stop looking at the memories once and for all. However, Zeke feels that they have no dearth of time, so there is no reason to stop.

When Grisha finally found King Reiss’ base, he could not gather the courage to acquire the Founding Titan and returned home to hug Eren. At this moment, Zeke realizes that his father may not have been committed to the restoration of Eldia in the way he has imagined. When Grisha privately mourns the death of his first wife and acknowledges that he should have never pushed his political ideologies on his young son, the holder of the Beast Titan is moved by his words. It finally begins to dawn on him that he had been wrong about a lot of things.

When Zeke sees Eren brutally murder Mikasa’s kidnappers, his brother explains that Grisha never manipulated him to do anything, and he was born this way. He could never allow anyone to take his freedom away from him. His brother is shocked by the eye-opening revelations. When Grisha finally goes to the King of Wall’s base, he confronts the family for stealing the memories of the Eldians and appeals passionately that they should stop the carnage that is about to unfold. 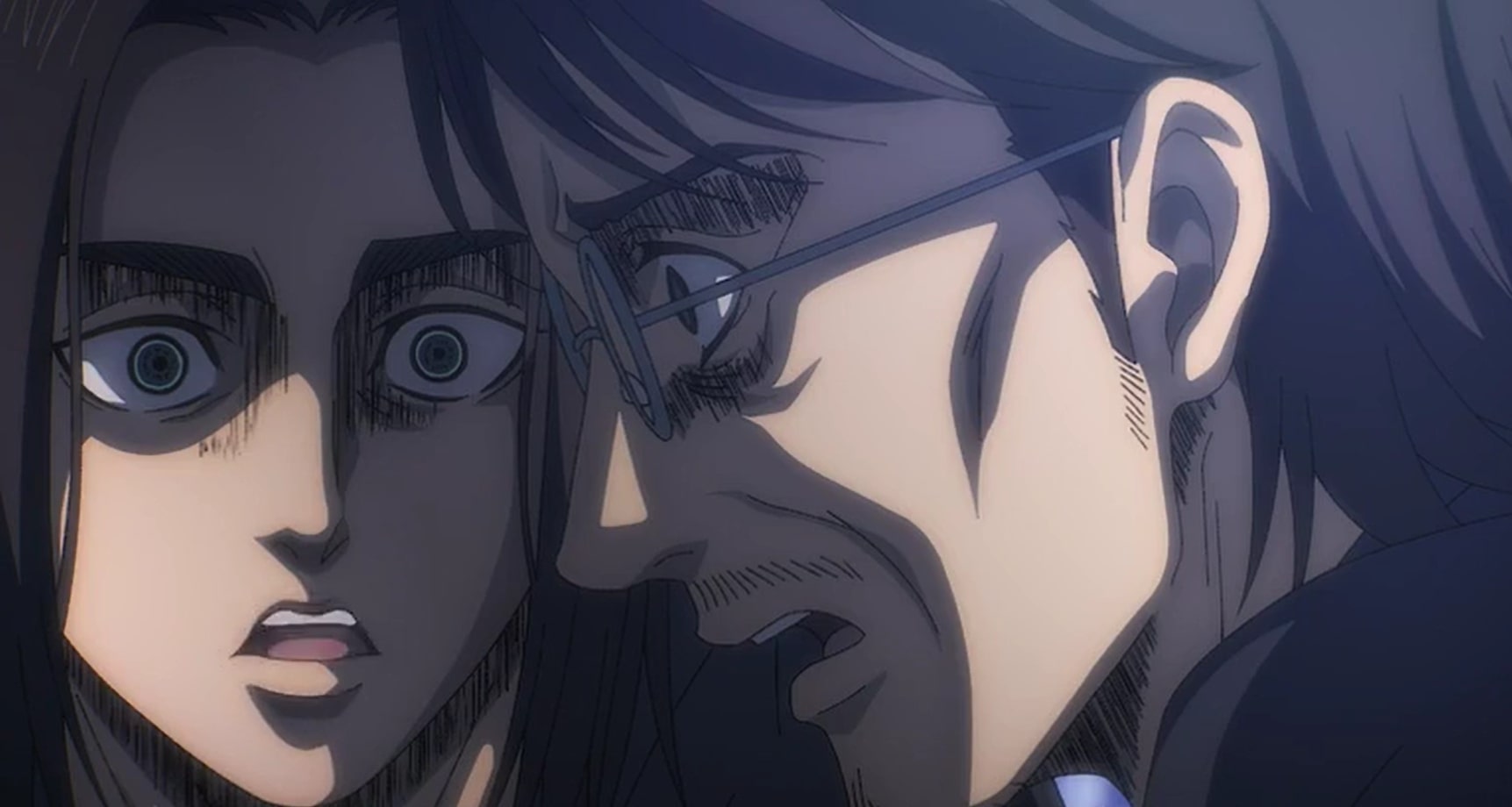 Unfortunately, Grisha’s appeals fall on deaf ears, and he realizes that he has to kill the entire family to acquire the Founding Titan. However, he can barely gather the courage to hurt children and throws the blade away. Eren from the future, who is watching his father, reminds him of his responsibilities, following which Grisha goes on a murderous rampage and acquires the Founding Titan. As he stumbles around after getting out of the King of Wall’s base, he realizes that Zeke is right in front of him. He hugs his long-lost child and asks for his forgiveness as the son-father duo begins to cry. As Eren watches the two embrace each other, Grisha tells Zeke to stop Eren.

Attack on Titan Season 4 Episode 20 Ending: What is the Attack Titan’s Special Characteristic? How Does it Affect Eren’s Father’s Decision at the King of Wall’s Base?

When Grisha confronts King Reiss’ family at the base, the royals ignore his desperate requests to stop the approaching Titans, who are about to bring down Wall Maria. They argue that the Eldians have committed horrific crimes in the past, and it’s time for their retribution. However, Grisha sympathizes with the people and argues that it is cruel for the royals to steal people’s memories and then expect them to suffer for the crimes that were committed thousands of years ago. 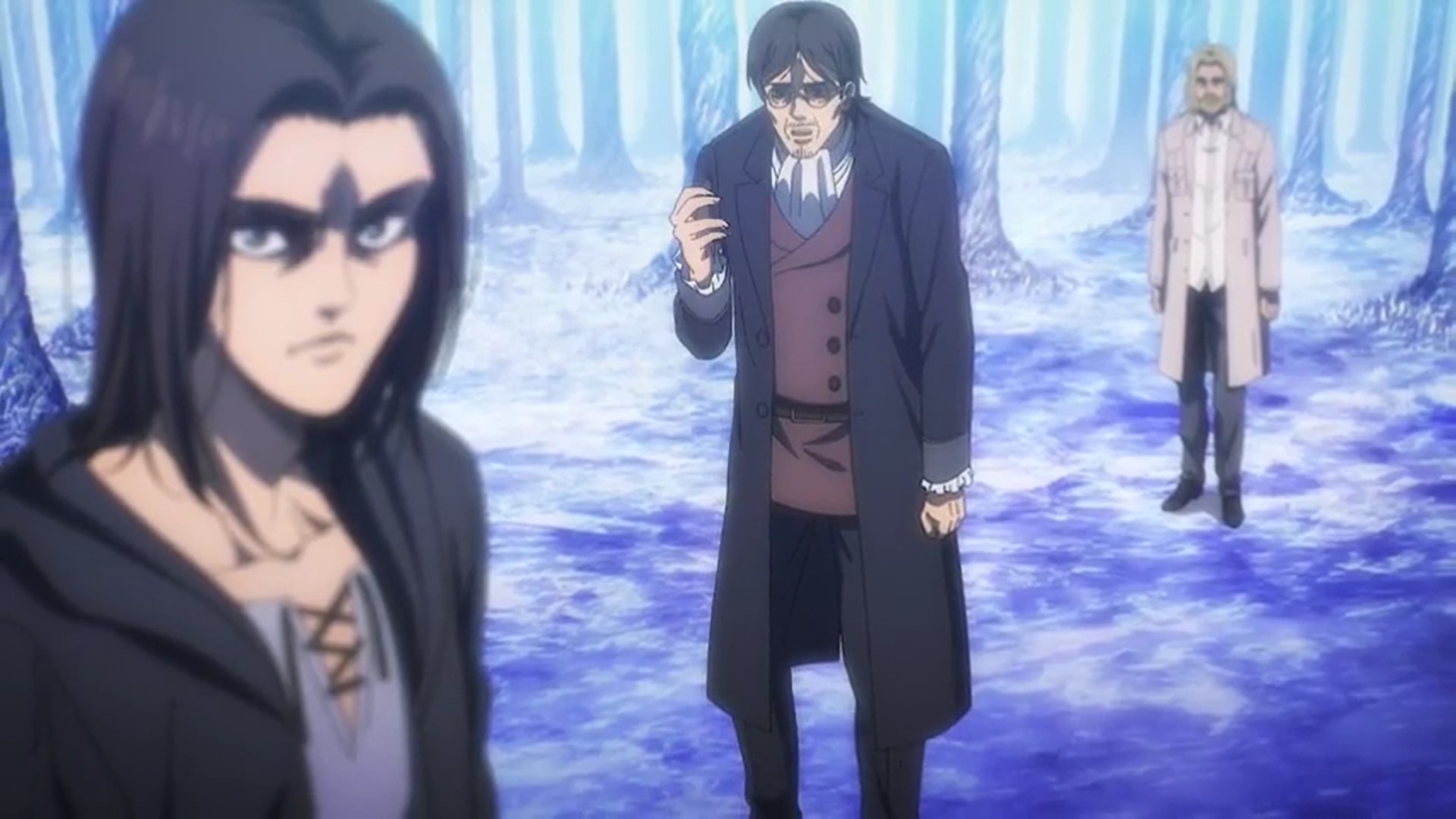 Realizing what the man standing in front of her intends to do, Frieda, the holder of the Founding Titan, reveals that he cannot inherit all the powers even if he was to eat him. Grisha admits that he is aware of the painful truth because the holder of the Attack Titan can see the memories of its future inheritors. The unique characteristic makes the Attack Titan special. It turns out that it has always been the future memories of Eren that have dictated the course of action of all the inheritors in the past, which has eventually led to the present moment.

So, it was actually Eren who has been influencing the course of action for each inheritor of the Attack Titan and has single-handedly kept the resistance against the self-righteousness of the king alive to this day. When Grisha falters and cannot bring himself to kill the royal children, Eren reminds his father of his duty towards the restoration of Eldia. His father knows what Eren intends to do as he can see the future through his sons’ eyes, and Grisha eventually decides to put his faith in Eren. 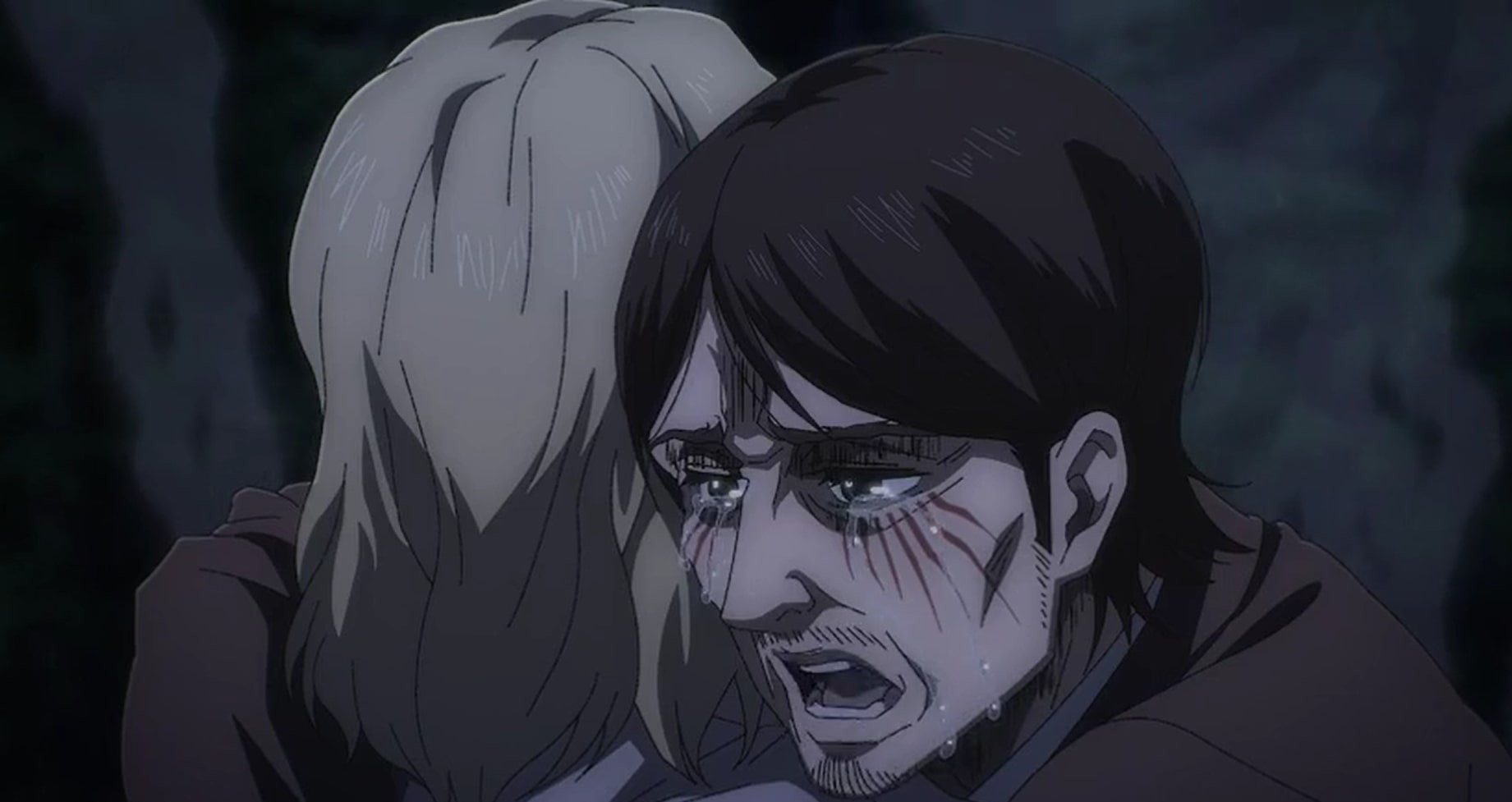 So, if it wasn’t for Eren’s memories, the result of Grisha’s confrontation with the royal family may have ended very differently. However, following the murder of the royal family, Grisha has second thoughts about his actions, which were clearly influenced by his son. Realizing that he cannot do anything now, he tells Zeke to stop Eren from putting his dangerous plans into action. Since past holders can see the memories of the future inheritors of the Attack Titan, it seems that Grisha has just come to know about the full scope of Eren’s twisted ideas, which is why he asks Zeke not to let him succeed.