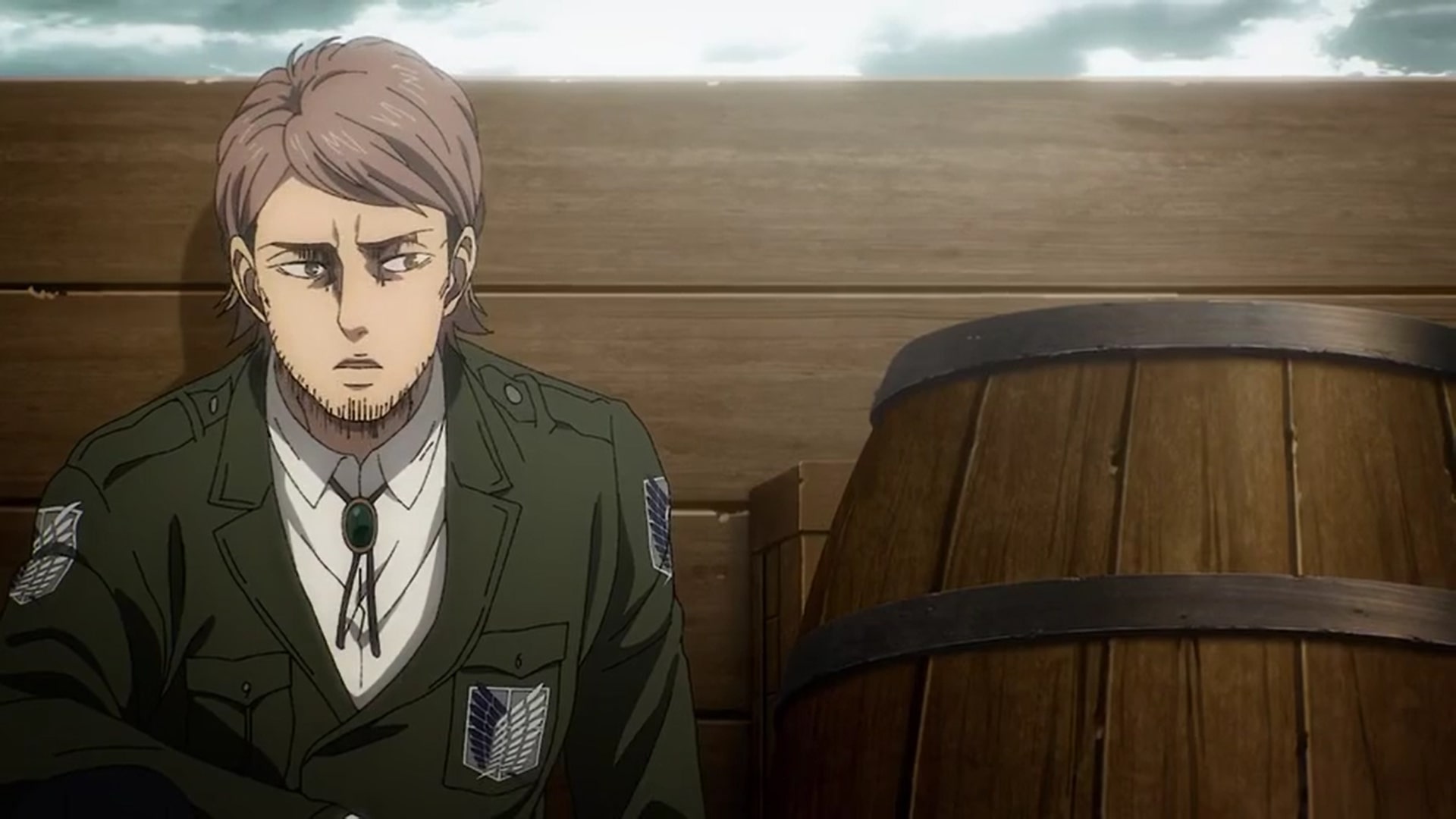 ‘Attack on Titan‘ season 4 episode 25 titled ‘Night of the End’ centers upon the conflicts between characters involved in the anti-Eren uprising. While Jean is in a dilemma because of his deep desire for a peaceful life and the world’s harsh reality, Mikasa is struggling internally as the day to face Eren and eventually stop his genocidal plan approaches. Unfortunately, the past rivalry of the Marlyeans and Eldians continues to affect their present teamwork as they try to discuss their reservations. Here is everything you need to know about the ending of ‘Attack on Titan’ season 4, episode 25. SPOILERS AHEAD!

After successfully rescuing Jean, Yelena, and Onyankopon from the Yaegerists, the Eldians and Marleyans who have joined hands to stop Eren from executing his genocidal plans have dinner together somewhere in a jungle. Sometime earlier, Hange personally had discussed the present scenario with Jean and Mikasa. While the latter immediately offers to help her persuade Eren not to do the unthinkable, the former has several reservations. But after Hange reminds him about the sacrifices of her dead comrades, he also agrees to come on board with the plan. 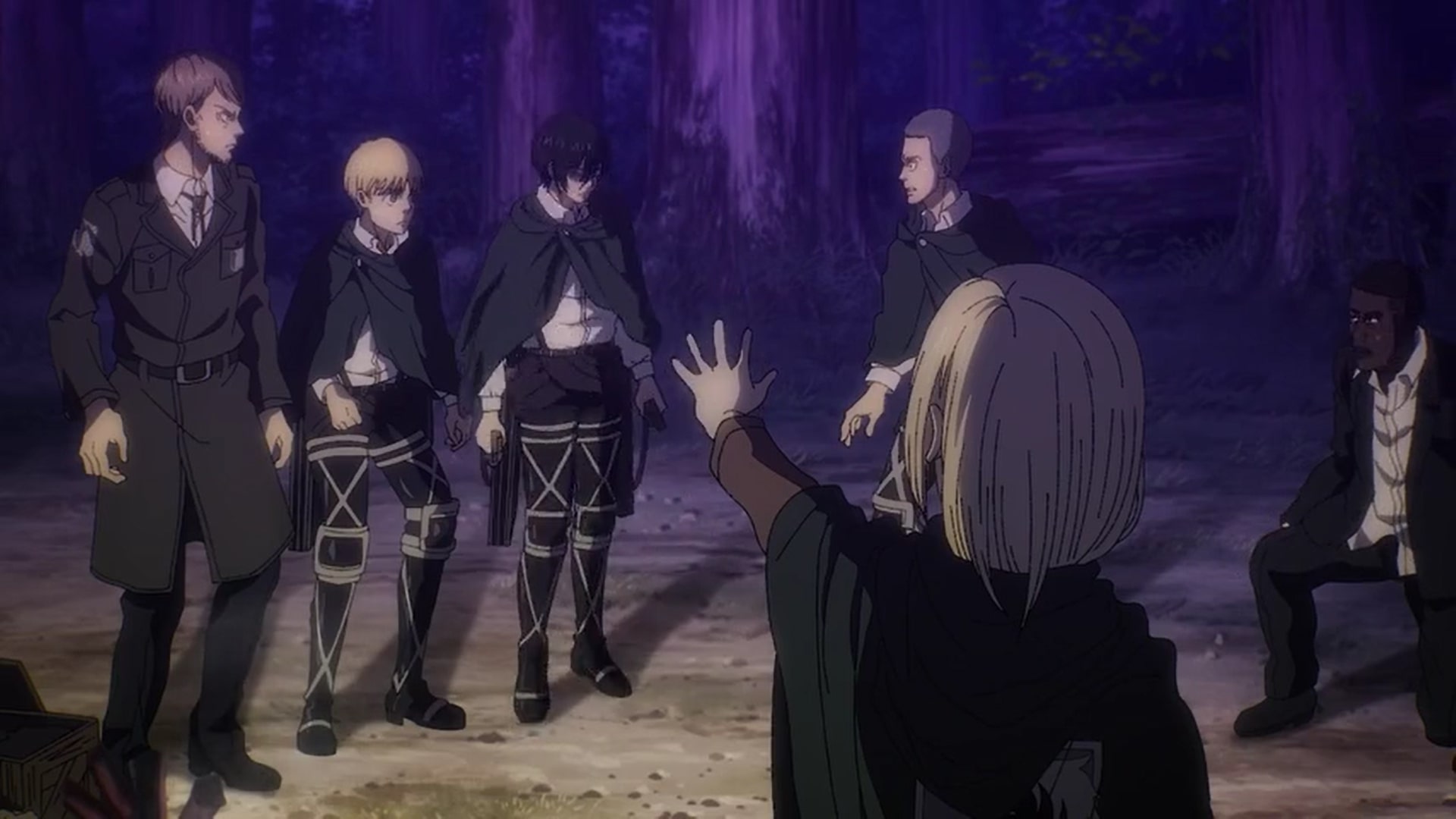 But just before they have dinner together, the Eldians and Marleyans who have joined hands for the same reason appear to be conflicted about working alongside their sworn enemies. General Magath questions Hange about her sudden change of heart and also opens up about his hate for the Eldians, whom he continues to call Devils. He is convinced that he and the Marleyans were right all along about the people living on Paradis Island. Appalled by his hateful comments, Jean argues that his people only defended themselves from countless Titans that Magath’s country deliberately sent to kill the Eldians.

Unfortunately, Magath could not care less about Jean’s arguments and brings up the 2,000-year-old history of wars and bloodshed that was started by Ymir. Hange tries to calm things down by arguing that discussions about the past are rendered moot by the present reality, but the emotional differences are only highlighted in the further arguments. Yelena, who has been silently listening to the entire conversation, reminds the Eldians and Marleyans about their heinous crimes. 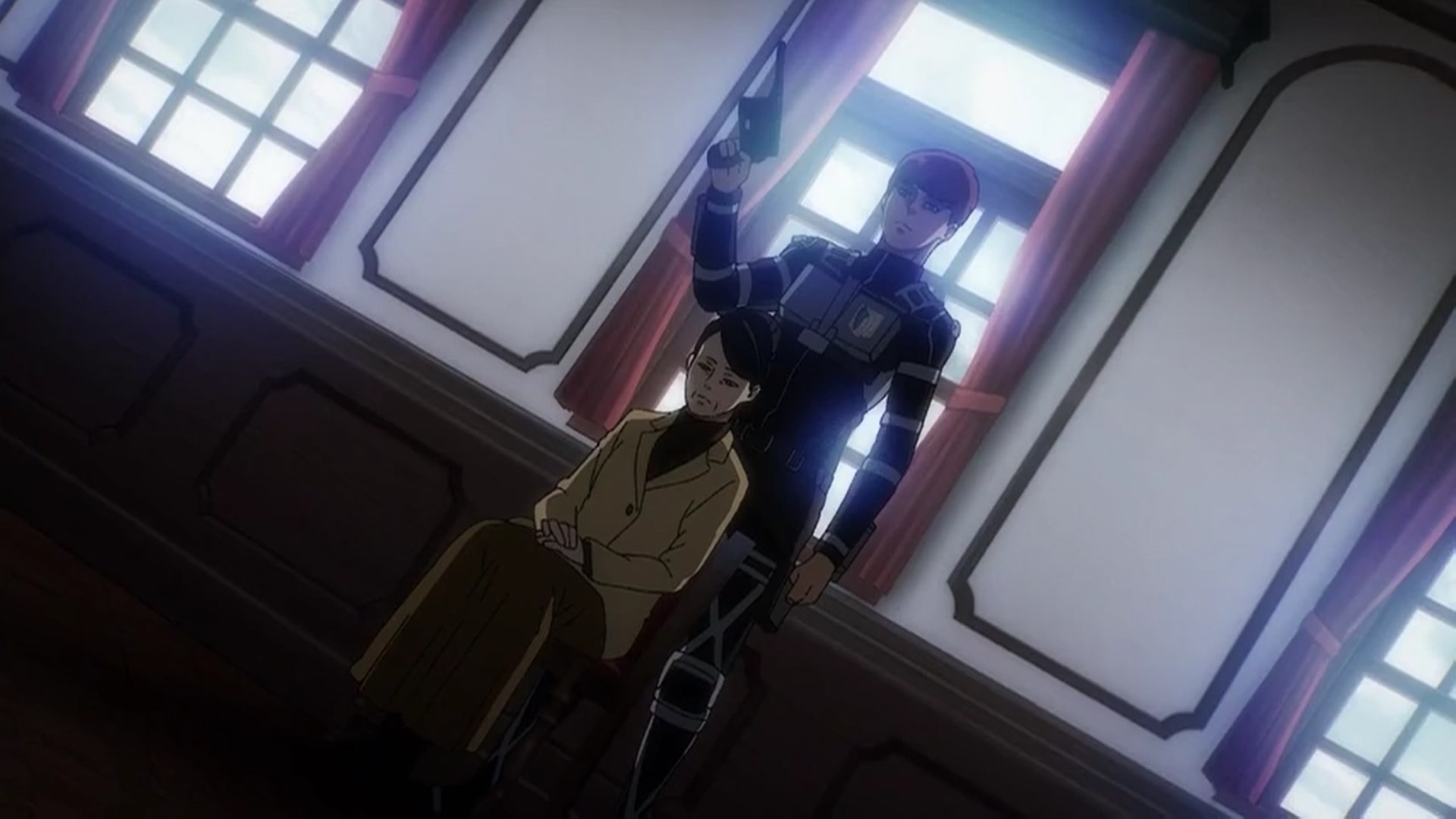 The discussions soon spiral out of control and culminate into a violent beatdown of Reiner by Jean when the holder of the Armored Titan confesses something about his past. Luckily, Gabi intervenes and calms things down by apologizing to Jean, who comes to his senses and walks away. The following day he wakes up Gabi and Reiner as the members of the anti-Eren uprising head towards the harbor. But while on their way, they are stopped by the Cart Titan, who informs them that the harbor is occupied by the Yeagerists.

Attack on Titan Season 4 Episode 25 Ending: Why Did Jean Beat Up Reiner? What Moves Gabi to Apologize to Him?

When Yelena pushes Jean to learn more about his friend Marco’s death and find the truth for himself, Annie confesses that she removed his Vertical Maneuver Gear, after which a Titan ate him. Before she can take the entire responsibility for the incident, Reiner intervenes and argues that she was just following his orders. The holder of the Armored Titan explains that he was forced to take the drastic step because Marco had accidentally heard him talking to Bertolt. 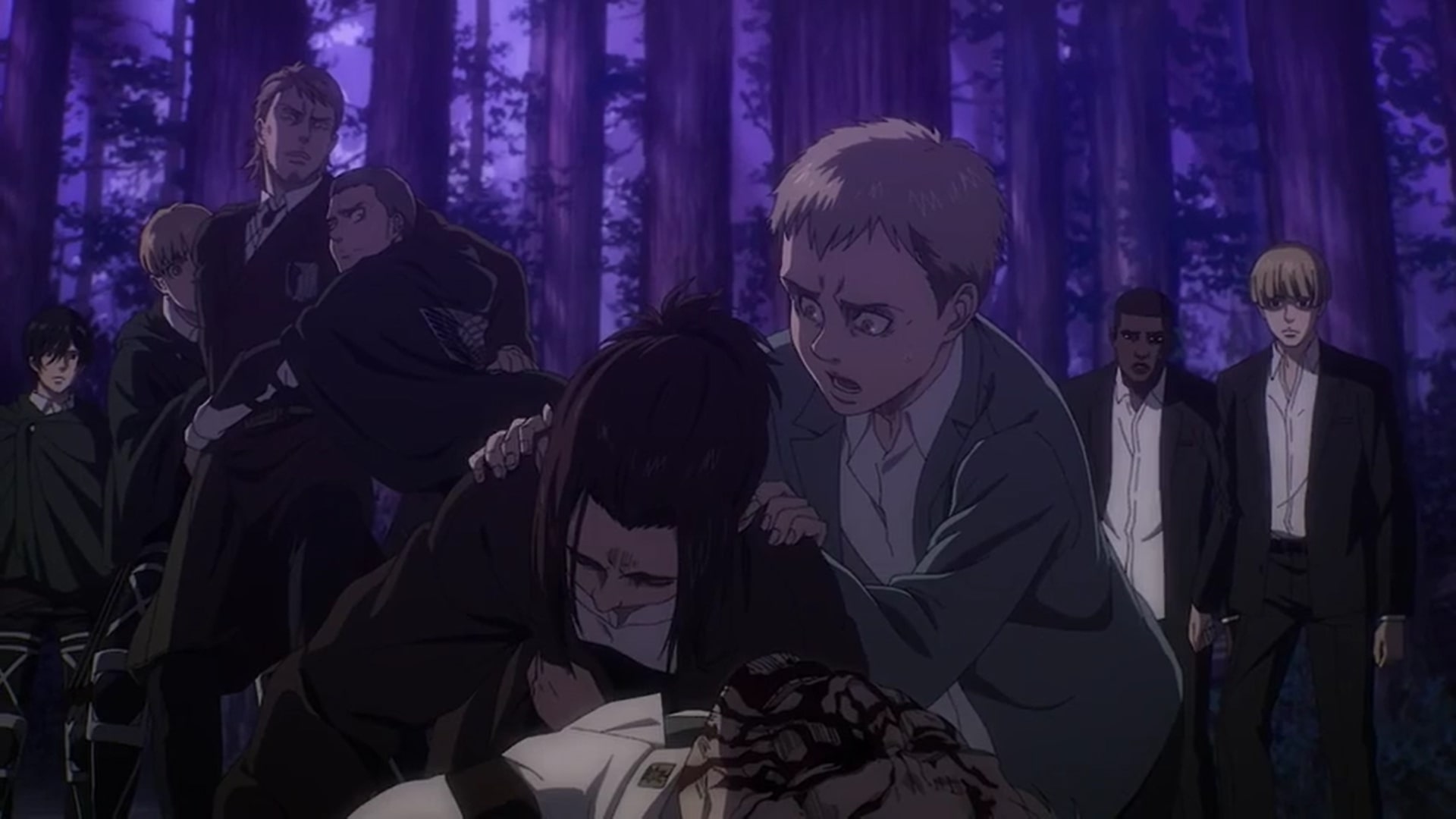 While he knew that it was the only way to keep their secret, Reiner was overwhelmed with guilt after that incident. Although Jean seems to be in control after learning the truth about his friends’ death, a few moments later, he jumps on Reiner and continues to punch his face even when his comrades try to stop him. However, he ultimately comes to his sense when he hits Gabi, who hugs Reiner to protect him from Jean’s merciless blows. She then apologizes to him, mindful of the fact that the people that she has fought along and for have hurt others.

Gabi has shown a remarkable understanding of the entire conflict ever since she is moved by the kindness of Sasha’s family. It reflects in her desperate apology to Jean as she knows that hate has to lead to the death of countless innocent people. Her mature intervention seems to work as Jean is soon calmed down and even apologizes to Gabi the following morning.

Does Yelena Come From a Small Nation Annexed by Marley? Why Did She Lie About Her Past?

When Yelena joined hands with Eren and Zeke to implement the Euthanasia plan and put an end to the conflict that has led to countless death over the course of two thousand years, she had told her comrades that she comes from a small nation that Marley annexed. However, her claims were never put to the test throughout the entire story. 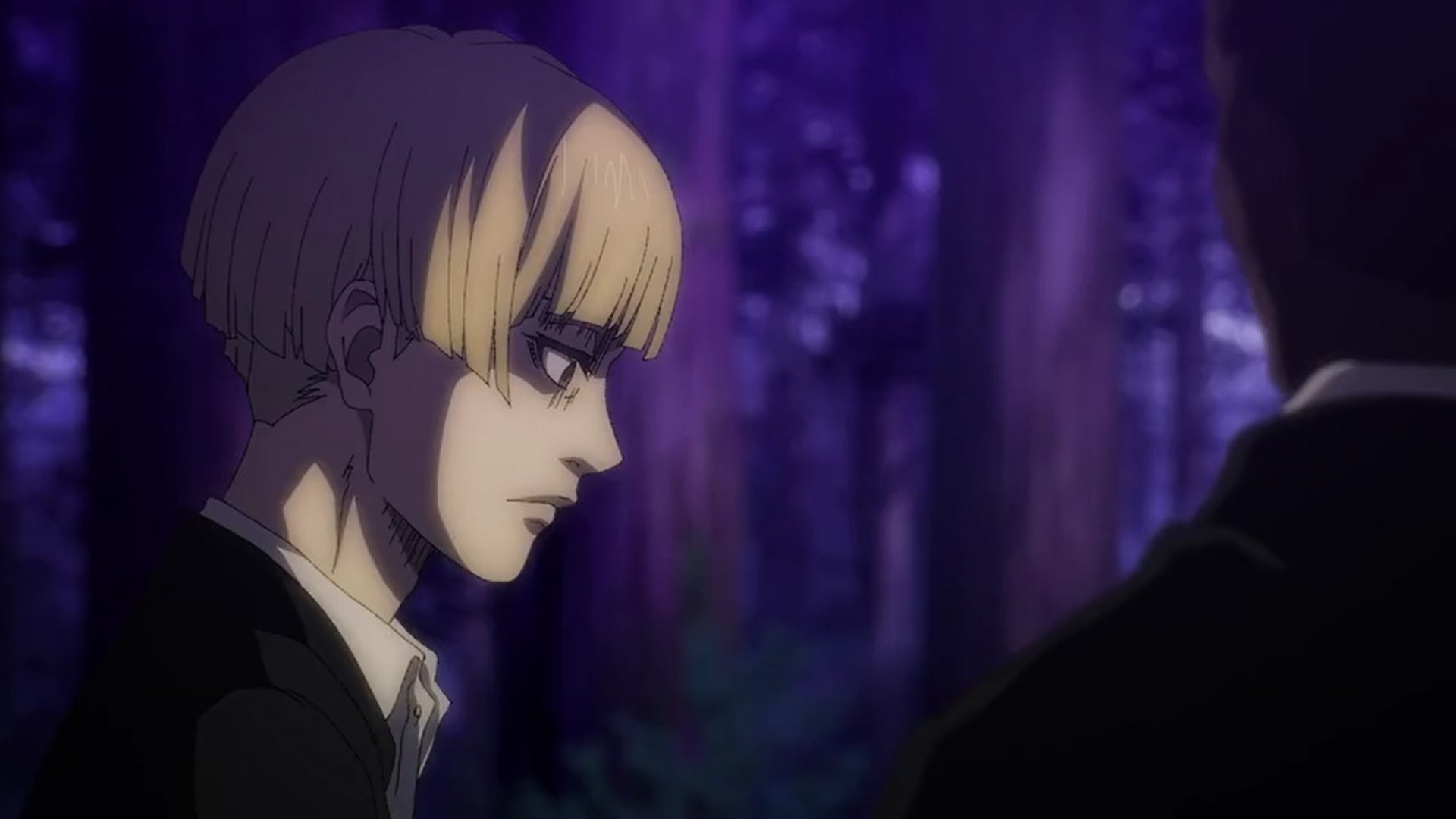 It turns out that General Magath and Pieck did some background checks on Yelena’s past and found out the shocking truth about her. Regardless of her claims, she actually came from a typical Marley family and was never a victim of the country’s colonizing ambitions. In fact, Yelena cooked up the entire story just so that she could fit in with her new comrades while working alongside Zeke.

The reasons for her lies are evident in her reverence of Zeke, and it seems that after her disillusionment with Marley, Yelena found meaning in his goal of ending the great conflict. Therefore, she did everything in her power, including lying, just so that she could get to work with Zeke and help him achieve his version of the solution to the Eldian and Marley problem.