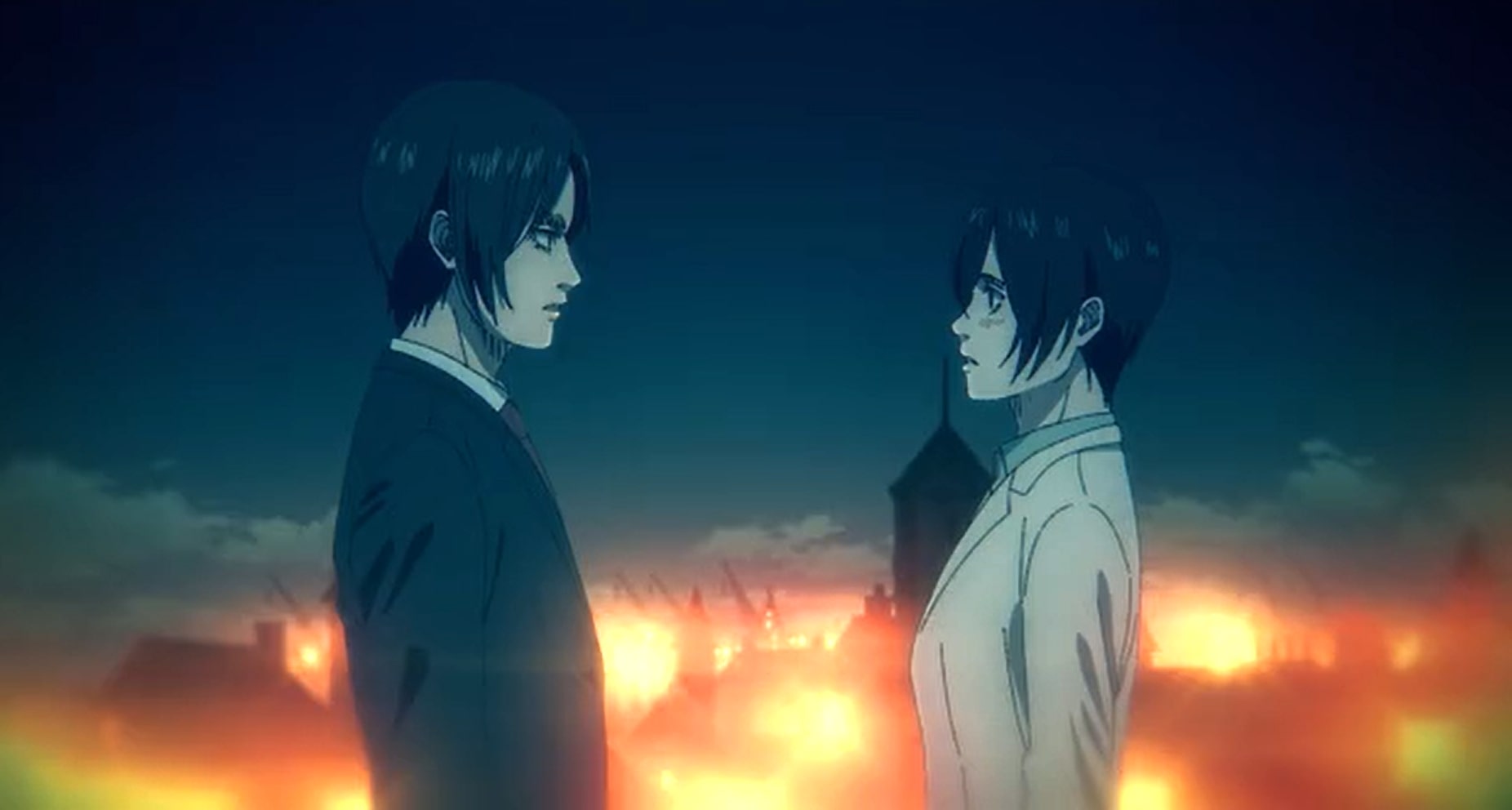 ‘Attack on Titan‘ season 4, episode 28, titled ‘The Dawn of Humanity,’ follows Mikasa as she looks back into the past and wonders what could have possibly led to Eren’s sudden change of heart following the decisive victory in the return to the Shignashina arc. She regrets not telling him her feelings when she got the right chance and partially blames herself for the shocking events that have now put countless lives in peril. Here is everything you need to know about the ending of ‘Attack on Titan’ season 4, episode 28. SPOILERS AHEAD!

After General Magath and Keith Shadis sacrifice their lives to destroy the Marleyan Cruiser chasing their allies, Mikasa, along with her friends, heads to the city of Odiha. After an altercation with Annie, who questions her resolve to stop Eren, Mikasa spends some time alone wondering whether her friend, who she had known all her life, was ever on the side of the greater good or not. She feels that Eren always wanted to serve others but fails to reconcile her emotional conclusion with the genocidal plan that stands against the values of her childhood friend. 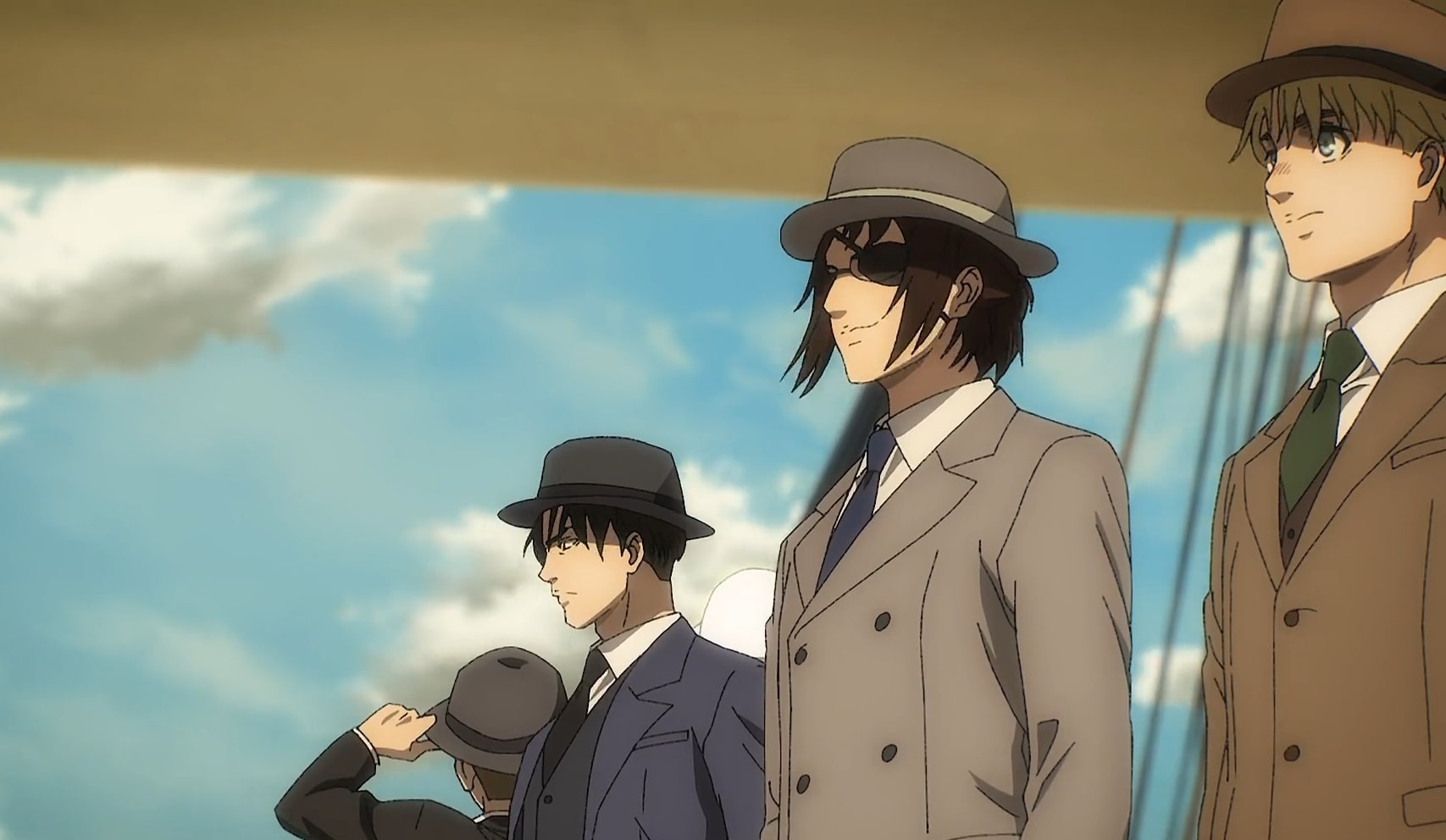 Mikasa recalls the day she and her friends first arrived in a city across the sea, where they experienced what it truly means to live their lives without the perpetual fear of being crushed by Titans. As they indulge in different delicacies available for their consumption, Sasha’s purse is stolen by a little boy, and Levi catches him red-handed. When the crowd gathers to teach the boy a lesson, Levi and his friends run away with the boy so that they don’t resort to some drastic measures. Eren, who has been silently watching everything unfold, follows the boy and ends up near a camp.

When Mikasa finds him, he draws comparisons between the lifestyle of the impoverished people torn-apart by war and the Eldians. At the moment, he also questions Mikasa about his place in her life but unfortunately can’t get his answer as a generous man from the nearby camps invites them for a feast. Soon, the duo is joined by their friends as they eat and drink their worries away, momentarily forgetting the helpless struggle for survival they and their people find themselves in back at home.

In a meeting with Kiyomi Azumabito, they are told by the ambassador of Hizuru that the only chance for making their voices are heard is the international forum that is to be organized soon. She asks Hange to ensure that people must know that the Eldians want peace, nothing else. However, the following day when the forum is held, Mikasa and her friends fail to get their voices heard, and to make matters worse; the platform actually becomes the very source of the promotion of the ideology that they were there to fight. 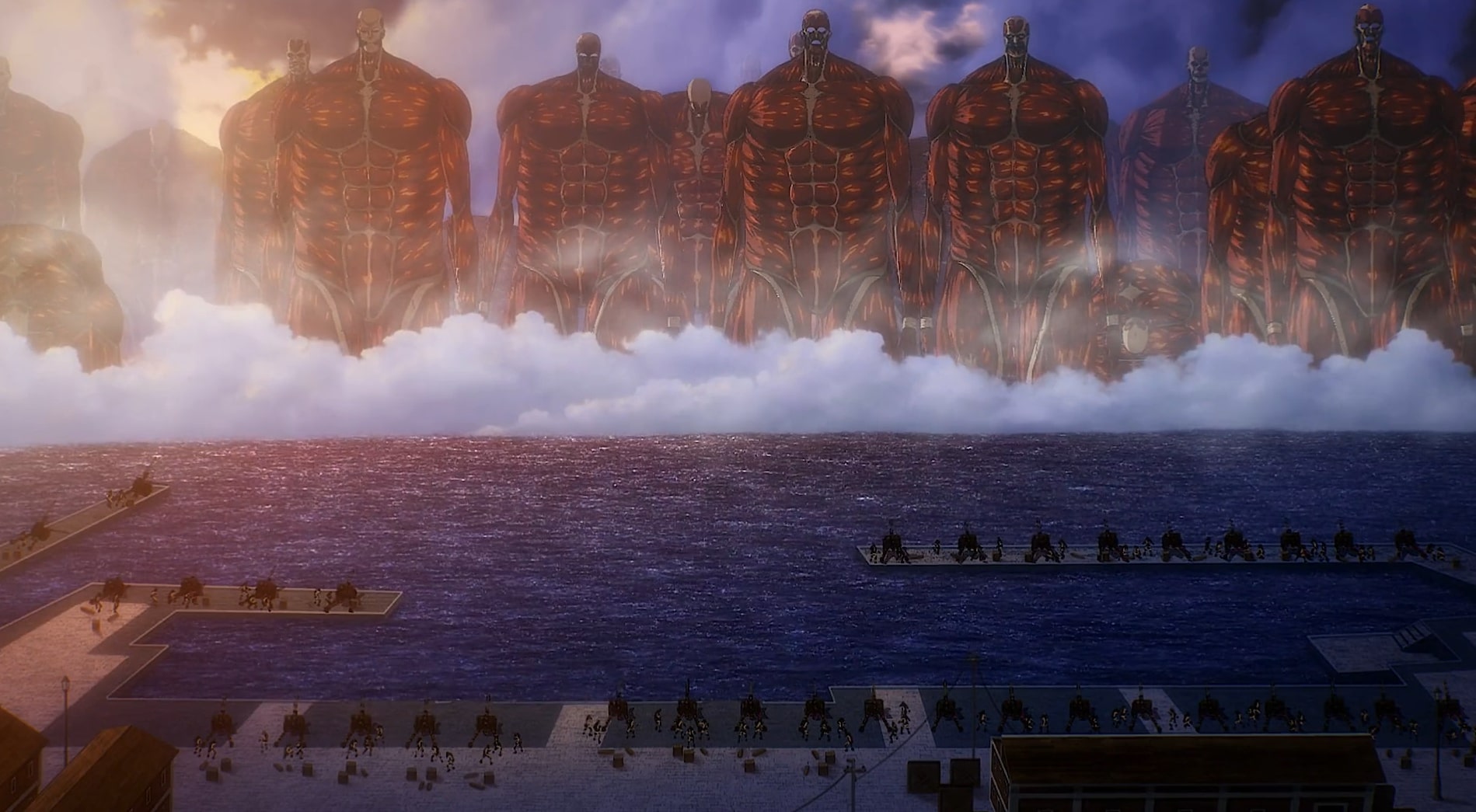 Meanwhile, in the present time, Eren and his army of Colossal Titans are confronted by the largest canons that exist on the planet. Unfortunately, they fail to stop their enemies, and in just a few moments, the fleet of ships is destroyed. Eren’s Colossal Titans set foot on the first city they plan to destroy, while his friends don’t appear to have a chance of catching up with him anytime soon.

Attack on Titan Season 4 Episode 28 Ending: What Made Eren Abandon Peace And Go Ahead With His Extermination Plan?

When Eren and his friends first arrived in a foreign nation with the hopes of promoting peace talks, they were hopeful that they might somehow manage to pull off the seemingly impossible without any unnecessary bloodshed. However, by this time, it seems Eren was already in the process of giving up on his hopes of a peaceful resolution of the centuries-old conflict. But things may have ended differently if Kiyomi Azumabito’s advice had worked as she had intended. 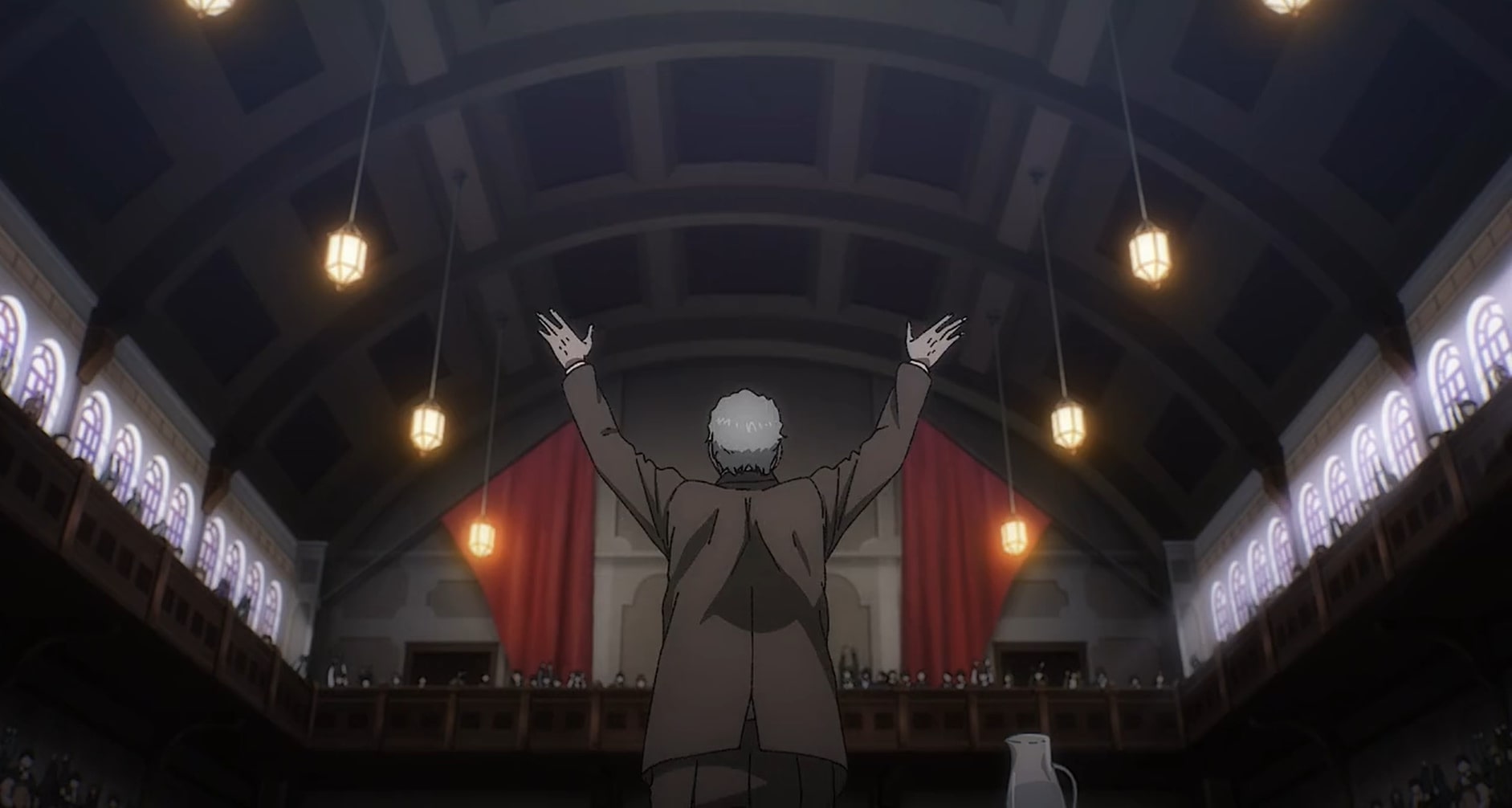 When Eren and his friends participated in the international forum, one of the speakers gave an emotive speech about the desperate need to provide aid for displaced Subjects of Ymir refugees who do not share the dangerous ideology of the Eldian Empire. Furthermore, he stressed that these people were forced to inbreed by the Eldians, and the only people who deserve hate are the despicable devil living on Paradis Island.

The emotional appeal did not fall on deaf ears as the people gathered at the international forum applauded the speech, thereby indirectly approving of the hate directed at the Eldians. While it was disappointing for Hange and others, none of them tried to publicly argue against the hate speech that was openly delivered there. Eren, who has been paying close attention to everything, decides to leave the forum without his friends.

So, it was ultimately the international forum that probably delivered the final blow to Eren’s hopes of peaceful resolution of the conflict. He left a message for his friends and disappeared soon after, and did not reunite with them until the raid of the Liberio arc. In the meantime, he had planned to use Zeke to get the powers of the Founding Titan so that he could kill everyone living outside Paradis Island.

What Does Eren Plan to Achieve By Executing His Genocidal Idea? 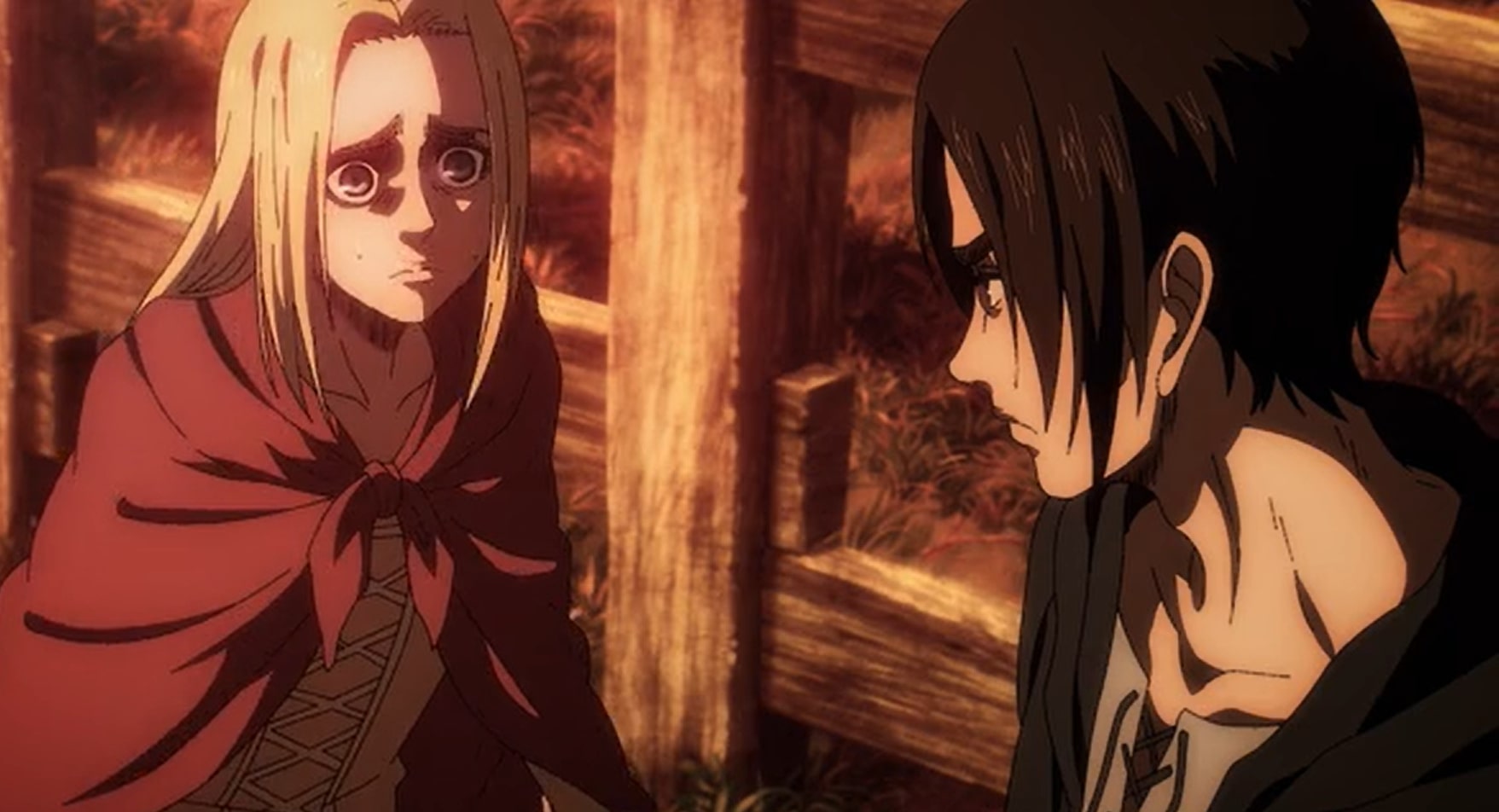 Eren’s genocidal idea has both personal and historical elements. While telling Historia what he has set out to do, he opens up about the latter. It’s obvious that by gaining his father’s memories, Eren now has a deep understanding of the centuries-long conflict that has led to the death of countless innocent people. He concludes from a close study of the complicated past that the only way to end the cycle of hate born out of revenge is to destroy the civilizations and their history that have created the problem in the first place. While one can argue that such extreme conclusions are wrong, Eren wholeheartedly believes in them.

Although this basically concludes his historical understanding of the problem and its solution, it is also noteworthy that the anti-hero has also repeated an emotional motivation behind his actions on different occasions. By committing the unforgivable crime of genocide, he ultimately hopes that his friends will finally get to live long and happy lives. So, to conclude, Eren plans to wipe out entire civilizations to give the world a new start and end the cycle of revenge while also hoping that his friends will somehow find happiness in all the chaos.