Banana in ‘The Masked Singer’: Clues and Guesses 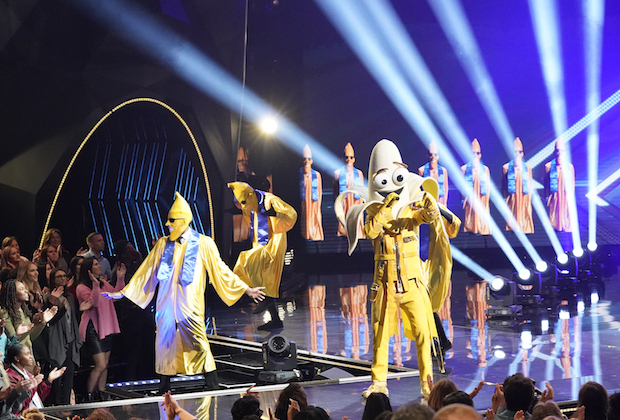 If fruit comes to your mind, when you hear Banana, instead of a fantastic performer with a wild side, then you might not be following ‘The Masked Singer‘ Season 3. Throughout the group stages, Banana has amazed us, despite slipping up now and then. In the Super Nine, Banana did not do his best but lives to fight another day. Now that the smackdowns are coming up, Banana has already promised us something special. Naturally, you must be eager to pull the peel back and see who Banana is. We have got you covered with the latest clues and guesses.

Banana says he was just a party boy looking for a good time when he first appeared on the show. However, his first performance changed his perspective, making him want to keep on the costume. However, he forgot the lyrics during his second performance, due to a dramatic injury from the past.

However, Banana just bounced right back and made it to the Super Nine. Moreover, the performer is not ready for this trip to end. For his super clue, Banana shows us a mullet, saying one might be a kindred spirit if they’ve sported the hairstyle. The performer describes it, saying it is business in the front and party in the back.

He performs ‘Sweet Home Alabama’ by Lynrd Skynrd, and after his performance, Banana refutes a wrong notion about his identity. He says that ‘blue-collar’ does not refer to blue-collar comedy. Although he is a funny guy, he is not standup funny. You can check out Banana’s clue package below.

As far guesses go, the Super Nine clue doesn’t reveal much that we don’t already know. Banana’s reference to a mullet might not tie in with Bret Michaels directly. Although the former Poison singer isn’t known for sporting the hairstyle, a lot of rockers and fans in the 90s had a mullet. Thus, Banana could be referring to that. Moreover, Banana has cleared up that the blue-collar does not refer to his comic accomplishments. Thus, we are left with the hint that the blue-collar might point to an actual dog collar, which ties in with Bret’s line of pet accessories, titled Pets Rock.

Banana’s little mishap on stage, where he forgot the lyrics due to an injury, might refer to Bret’s brain hemorrhage, which nearly turned fatal for the star. Other clues also line up with Bret, including the reference to riding go-karts with his daughters. You can check out a video from his official YouTube channel, where he goes go-karting with his daughter.

Clues like a cowboy hat, and boots, might throw viewers off. However, they don’t refer to country singers. Instead, they refer to Bret, who’s often seen sporting a cowboy hat. Besides, fans have also pointed out that many of Banana’s movements on stage remind them of Bret’s live performances. You can check out a fan’s tweet about Bret being Banana. However, the netizen does not seem too pleased at the possibility of the rockstar being part of ‘The Masked Singer.’

Despite some clues seemingly pointing at other celebrities, most fans seem to agree that Bret Michaels is wearing the Banana outfit. One of the hints about Banana’s group’s identity is that Oprah has interviewed everybody. Michaels was interviewed by her, via satellite, after he suffered the hemorrhage.

For now, it seems like an obvious conclusion that Bret is wearing the outfit. However, the next few performances are sure to see more clues, which will help us discern who Banana truly is.

Read More: Who is Kangaroo on Masked Singer?