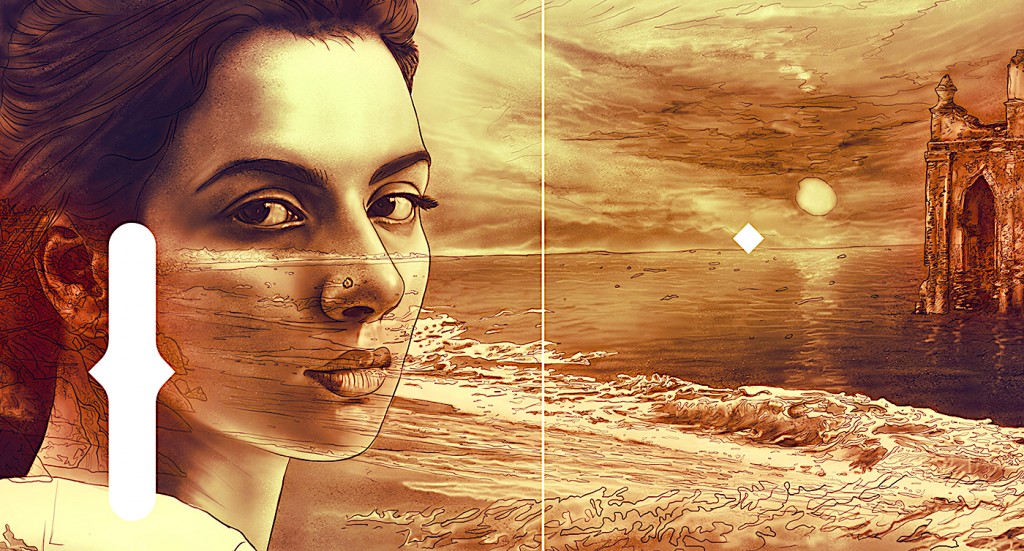 After the blockbuster year that 2016 was, with movies like ‘Kirik Party’, ‘U Turn’, ‘Karvva’, ‘Thithi’, ‘Mungaru Male 2′ to name a few raking up the charts and reaching the zenith of box office collections and critics’ accolades, 2017 perhaps couldn’t live up to the expectations in some of the genres, with the movies getting mixed responses both critically as well as commercially. Whereas 2016 we had witnessed smaller budget movies doing exceptionally well, with scripts that were out-of-the-league and which were a straight departure from the trend of the preceding years, 2017, on the other hand, witnessed fewer movies making their mark while others lagged behind either script-wise or with respect to the performances.

Given the rich cultural platter, topped with the necessary ingredients of a mass-entertainer movie that Sandalwood has often delivered to us, 2017 could be a pit stop for Kannada cinema with a lot to learn from the shortcomings, not overdoing the script would be one such example. With this list, we bring to you the list of top Kannada movies that were released in the year 2017, and despite the fact that some of them were made with a shoestring budget, they were no less than eye-openers and superhit blockbusters. For the fans of Puneeth Rajkumar, Sudeep or Darshan or for all the horror or suspense-thriller junkies out there, 2017 appears to be an outstanding year for Kannada cinema. 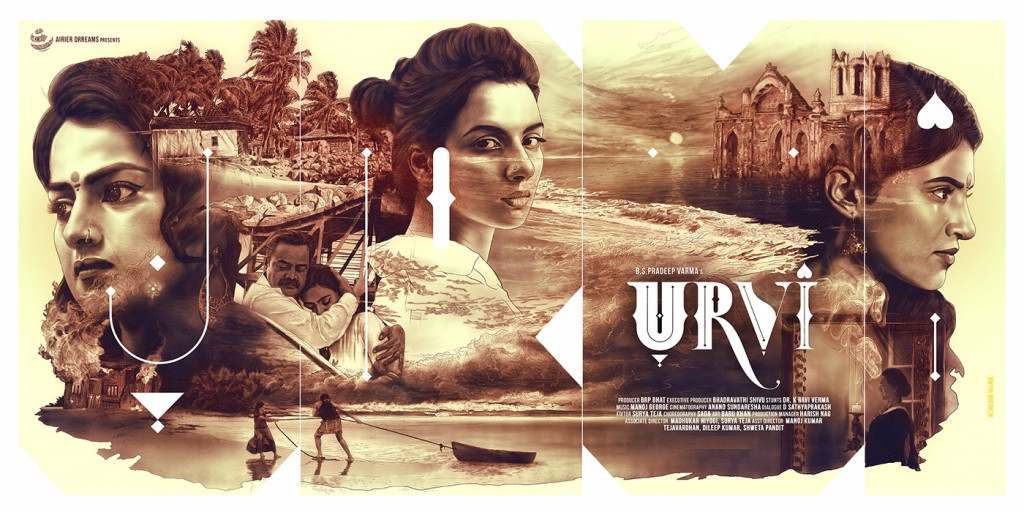 One of the female-centric blockbusters of the year 2017, though ‘Urvi’ was a winner in terms of its performances, stunning cinematography, and layered monologues and dialogues, the story could’ve been way better in terms of its execution – perhaps the only department where the movie seems faltering. Revolving around two sex-workers Suzie and Daisy, and another girl Asha, who had been wrongly framed into the whole sex-trafficking nexus, they take it upon themselves to take on Devaragunda, a pimp and a womanizing rapist who had wronged many lives surrounding them, including theirs. Though the story seems simplistic and nothing out of the extraordinary, ‘Urvi’s soul lies in its cast and the strength of its characters portrayed on-screen.

With Darshan playing the titular role, ‘Tarak’ has absolutely nothing new with respect to its storyline or the drama that ensues when a well-settled NRI returns to India. Perhaps made only for Darshan’s die-hard fans, Challenging Star Darshan dons the same old demeanour but without any catchy dialogues, fight scenes or swag. The story of an NRI, who is reluctant to come to India, yet who hasn’t forgotten his values, eventually returns home at the behest of a girl named Meera, his love interest, who takes him to the task. Once back, he is coerced into marrying Sneha by a pushy, ailing grandfather. The drama that follows is nothing we haven’t seen in countless Kannada or Telugu movies. ‘Tarak’ is a tale which has been narrated by many, sometimes in a much better way.

“Bold, brave, and beautiful” are the words that best describe ‘Shuddhi’ if nothing else. Primarily a film with a strong social message, ‘Shuddhi’ revolves around three women – a US based journalist Karlyn, who’s in India on the trail of criminals, and two journalists and social activists who are fighting against the system to make amends to the otherwise flawed Juvenile Justice Act. As the movie progresses, Karlyn, along with her newfound friends tries to tackle on what can be dubbed as the bureaucratic and political battery, yet, the conclusion is something that isn’t very apparent. ‘Shuddhi’ hits the right notes from the beginning, though it falters towards the end given its slow pace and somewhat cliched storyline. Though the message isn’t very clear, the intent damn right is. 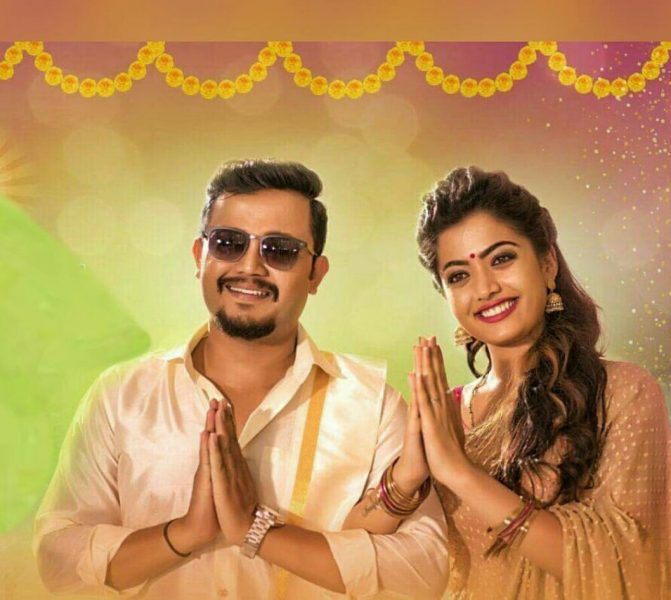 The #hastag in the movie’s title speaks volumes about what you’re going to witness. The screenwriters of the film deserve extra kudos for bringing in the nitty-gritty of the lives of a newly-wed couple on-screen in the most realistic manner. Revolving around Kush, a gynaecologist and Khushi, a housewife, and how Kush’s life takes a U-turn after his marriage when he realises that his secrets would no longer remain secrets and that the other facets of his life may come to the fore forms the basic narrative. Things that happen afterwards makes the film funnier and full of life. The feel-good factor also lies in the fact that the youthfulness is maintained until the end and #Chamak through and through feels like a breath of fresh breeze.

A horror-thriller at the outset, ‘Aake’ boasts of all the elements of a typical horror movie, complete with a chilling background score and meaningful cinematography. The plot revolves around a London based artist who, while working on the illustrations for a book, comes across a ghost story, which shockingly is based on a real-life adaptation. As he explores further on the authenticity of the story, enter Sharmila, a single mother who has separated from her husband, with a strange connection to another woman named Maya. The story that follows is a topsy-turvy affair, with ample twists, jolts, and incredible performances. Officially, a remake of the Tamil superhit ‘Maya’, ‘Aake’ won’t let you sit back and relax, neither will it let you catch your breath. 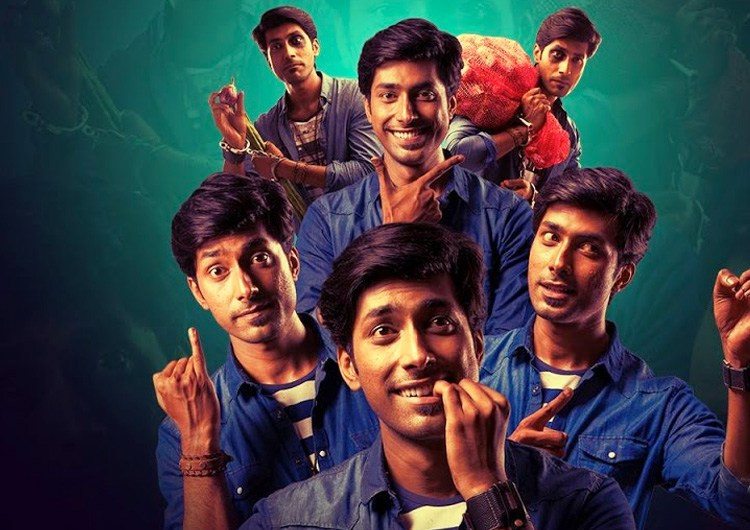 A movie which derives its popularity from its climax, the quirky dialogues, and to a little extent, the thriller-comedy part, ‘Operation Alamelamma’ surrounds a vegetable vendor Purmy, who has a penchant for flaunting himself, and who has a liking for Ananya. As Purmy has been called upon by cops in a kidnapping case, the drama that ensues comprises of Purity and others trying to solve the kidnap mystery, amidst a brimming romance affair and some catchy action scenes. ‘Operation Alamelamma’ is out-and-out entertaining and the performances have an everlasting impact. 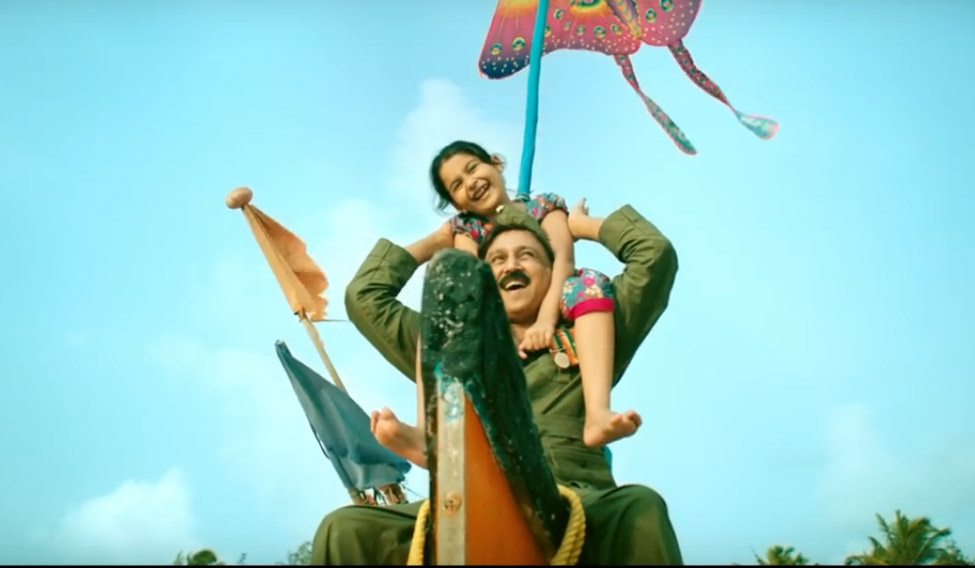 Acclaimed by critics and audiences alike, ‘Pushpaka Vimana’ shows the beautiful bond between a feeble-minded father Ananta and his daugher Puttalakshmi, and his obsession with planes and flying. On a fateful day, when Ananta is out to buy a toy plane for his daughter, he’s picked by the cops and sent to jail based on false accusations. But Ananta’s optimistic outlook on life doesn’t let him reel under the grimness of the prison and he succeeds to make his newfound “house” as jolly and lively as ever, while he meets with his daughter regularly and also fights back to prove his innocence. Soulful music, an emotional backdrop of the movie, and Ananta’s yearning to be free as ever make ‘Pushpaka Vimana’ a moving family drama, something that is reminiscent of Tamil superhit blockbuster ‘Deiva Thirumagal (2011)’. 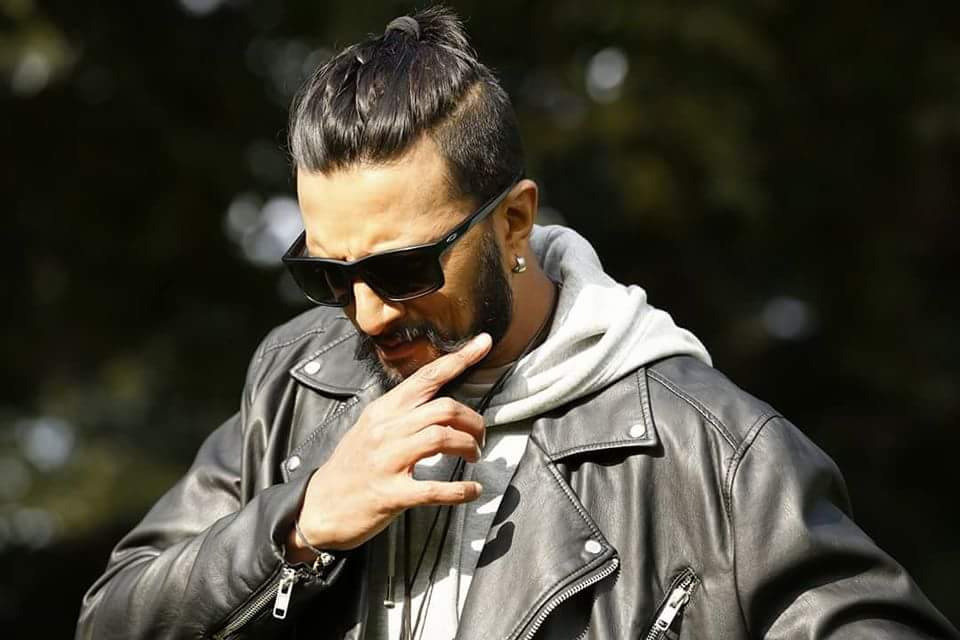 Sudeep’s look as the daunting “tiger” in this movie was one of the most talked about affairs, which may also have led to the unprecedented success of the movie at the Box Office. Sudeep plays Captain Ram, a commando with the para special forces who is a no-nonsense countryman with morally upright values. Enter Dr Nandhini, a girl whom he rescues and who falls for him, as he comes to know about the untimely death of his brother, IAS officer Sathyamurthy, who allegedly has committed suicide. Suspecting foul play, Captain Ram sets himself on a mission to track the perpetrators who led to his brother’s death and get to the bottom of things, with ample romance-drama-action-suspense thrown at the audiences all the while. The songs and the visuals add to the film’s fervour and also makes it a must watch entertainer, which is out of the league from your typical masala movies. 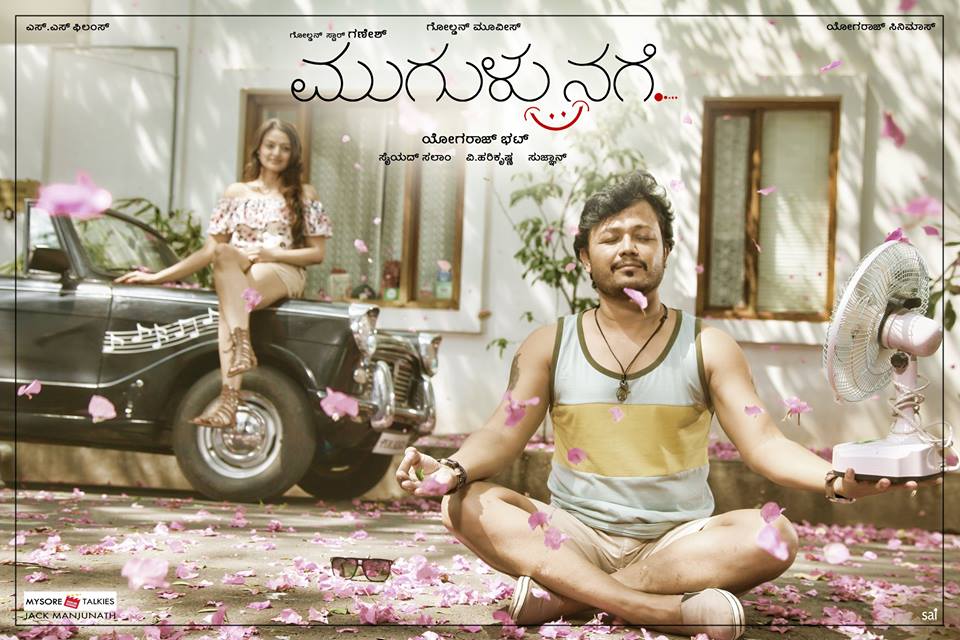 An ambitious venture which promises to recreate the charm of the decade-old Sandalwood blockbuster ‘Mungaru Male (2006)’, ‘Mugulu Nage’ succeeds in recreating the charm while maintaining its own identity at the same time. The film revolves around Pulakeshi, a software engineer by profession who has a unique condition – he has never cried in his life. In and out of romances with many girls, he settles for Charulatha, a girl based in the countryside who has very specific preferences for how her prospective life partner should be. The music and the picturesque countryside, along with the direction are the winning points of this film.

A reminiscent of ‘Ugramm (2014)’ from its outset, ‘Mufti’ is the only neo-noir category of Kannada films that has made it on to this list. Srimurali, who, after his stint with many action movies, plays an undercover cop Ganaa in the movie. More than Srimurali, the man who hogs away all the limelight is essentially Shiva Rajkumar as a criminal don Ranagallu, with his demeanour in an unshaven beard and his gangsta swag enticing as always. Set in Ronapura, Ganaa, the undercover cop, infiltrates Ranagallu’s gang to break the nexus from the inside. The fast-paced action and all the gore is worthwhile, including the performances, which make you whistle all the while you watch the movie. ‘Mufti’ is gripping and straightforward, without wandering off from its holistic narrative. 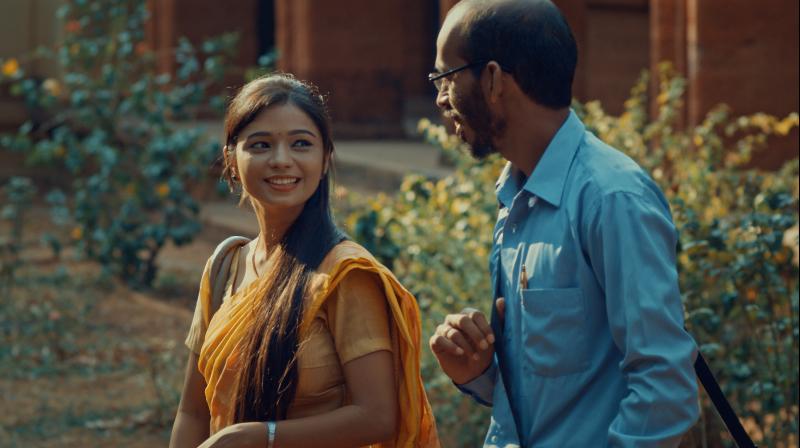 As funny as the title sounds, the movie picks up the pace right from its beginning. The story revolves around a 28-year-old introverted, bald lecturer Janardhan, with his inability to find popularity among women due to his baldness. His world comes shattering when an astrologer tells him to get married within the year or endure bachelorhood for a lifetime. The social stigmas and cliches faced by Janardhan are rampant and are reflective of the prevailing realism in our society. The body-shaming part has been handled in a pun-intended yet matured manner, which occasionally makes us laugh. Emotions run high in this one, with amazing performances and music that undoubtedly fits in. Easily one of the best Kannada movies of 2017. 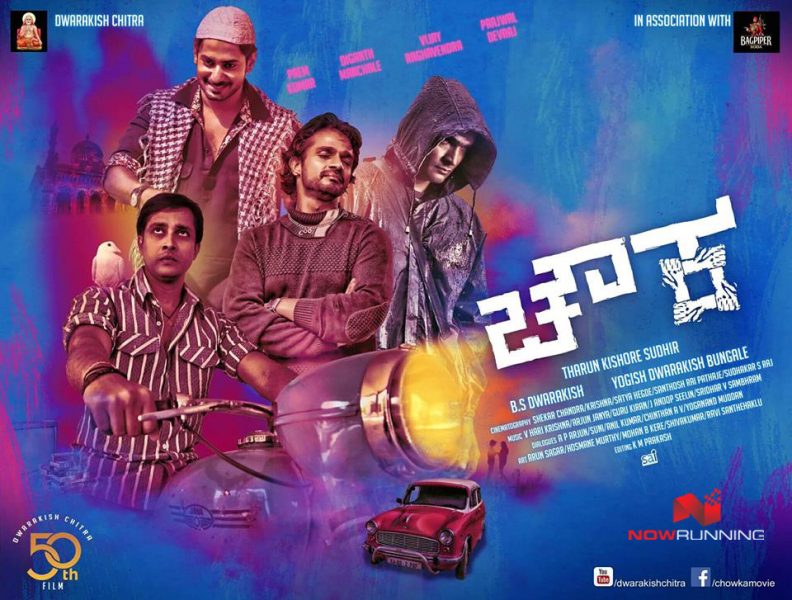 The touted-to-be ‘Rang De Basanti’ of Sandalwood and perhaps one of the most anticipated movies of 2017, ‘Chowka’ follows a non-linear, hyperlink narrative of the lives of four friends, who, despite being zealous and ambitious in their lives, land up in jails across Karnataka, being wrongly convicted for pseudo-crimes. As the story progresses, their stories converge and their escapade to do the right thing forms the climax of the whole depiction. Thought-provoking and technically astounding, ‘Chowka’ is pragmatic and impactful in its own ways.

Perhaps the most glamourous Kannada superhit of 2017, ‘Raajakumara’ follows the story of Siddharth (Puneeth Rajkumar), a morally upright, patriotic businessman who is the only child of his foster parents Ashok and Sujatha. As tragedy strikes their family, with his parents’ untimely death in a plane crash, he returns to India only to find that the locals have had some reservations against his father due to the wrongdoings of a minister Jagannath. While Siddharth tries to set things right, he also gains the backing of the locals and also falls in love with a salsa instructor. A mass entertainer, with all the requisite elements of a blockbuster viz. action, comedy, drama, romance, and thrill, and not to forget the oozing extravagance, ‘Raajakumara’ is the perfect family-action drama you could sit back and watch on a lazy afternoon.