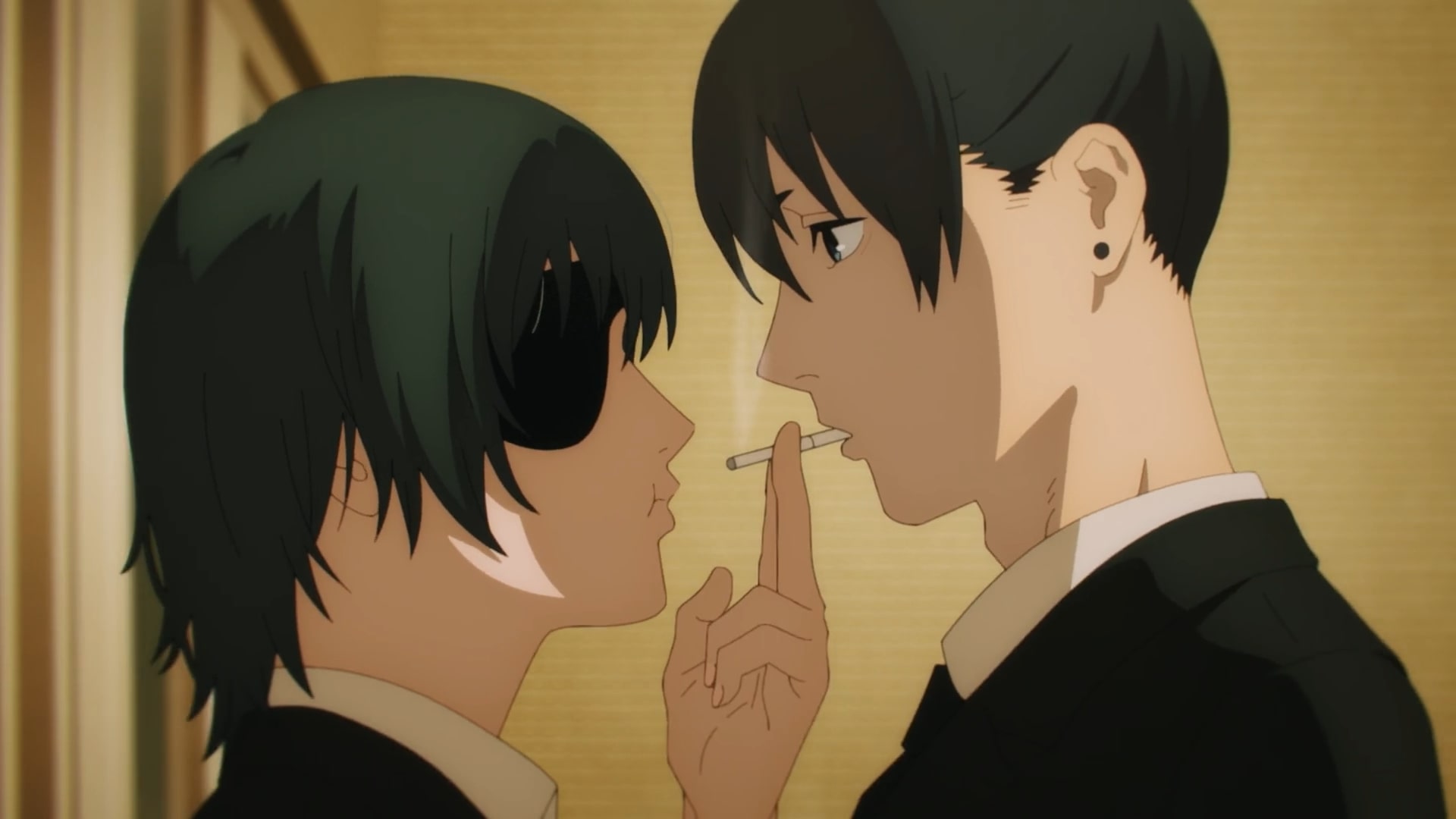 In ‘Chainsaw Man’ episode 6 titled ‘Kill Denji,’ the show focuses on the six members of the Public Safety Devil Extermination Special Division 4 as they realize that they are stuck on the 8th floor of the hotel. However, the Devil controlling everything offers to make a contract with them according to which he will let everyone go if he gets to eat Denji. Arai and Kobeni who are paranoid by this point want to sign the contract but Aki and Himeno reject the idea. Here’s everything you need to know about the ending of ‘Chainsaw Man’ episode 6. SPOILERS AHEAD!

While looking for the devil, Arai notices that no matter how much they climb they always end up on the 8th floor. Himeno is also intrigued by the strange phenomena and puts it to the test only to realize that it is true. Aki then investigates the rest of the rooms on the floor only to find that there is no way out of the 8th floor no matter what they do. 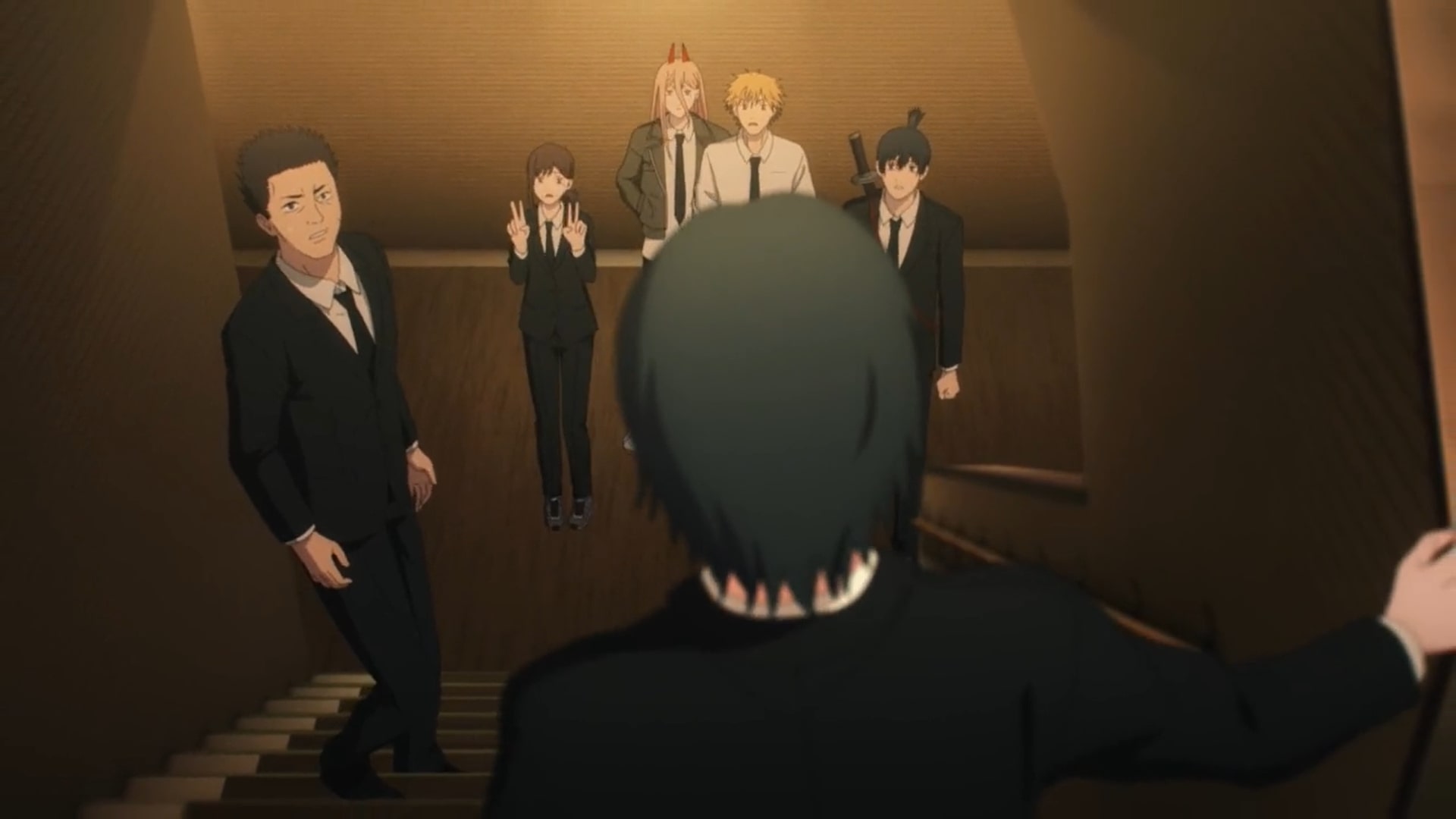 To make matters worse, the clocks are also stuck at 8:18 meaning that they are possibly stuck there for all eternity and no help will come for them regardless of how long they wait. While the other members of the Public Safety Devil Extermination Special Division 4 start to worry, Denji remains carefree and falls asleep on the bed. He is awakened by Himeno after some time and learns that Arai has locked himself up while Kobeni had to be knocked out as she was starting to panic too much.

In the meantime, Akai works relentlessly and eventually gives his team the bad news that the devil Power killed earlier is actually not dead and is getting bigger with each passing minute. When Aki, Denji, and Himeno finally confront him, the devil reveals that his heart is actually not on the 8th floor- meaning that they themselves cannot kill him. However, he offers to make a contract with the Devil Hunters. If they allow him to eat Denji, he proposes to let everyone else live. 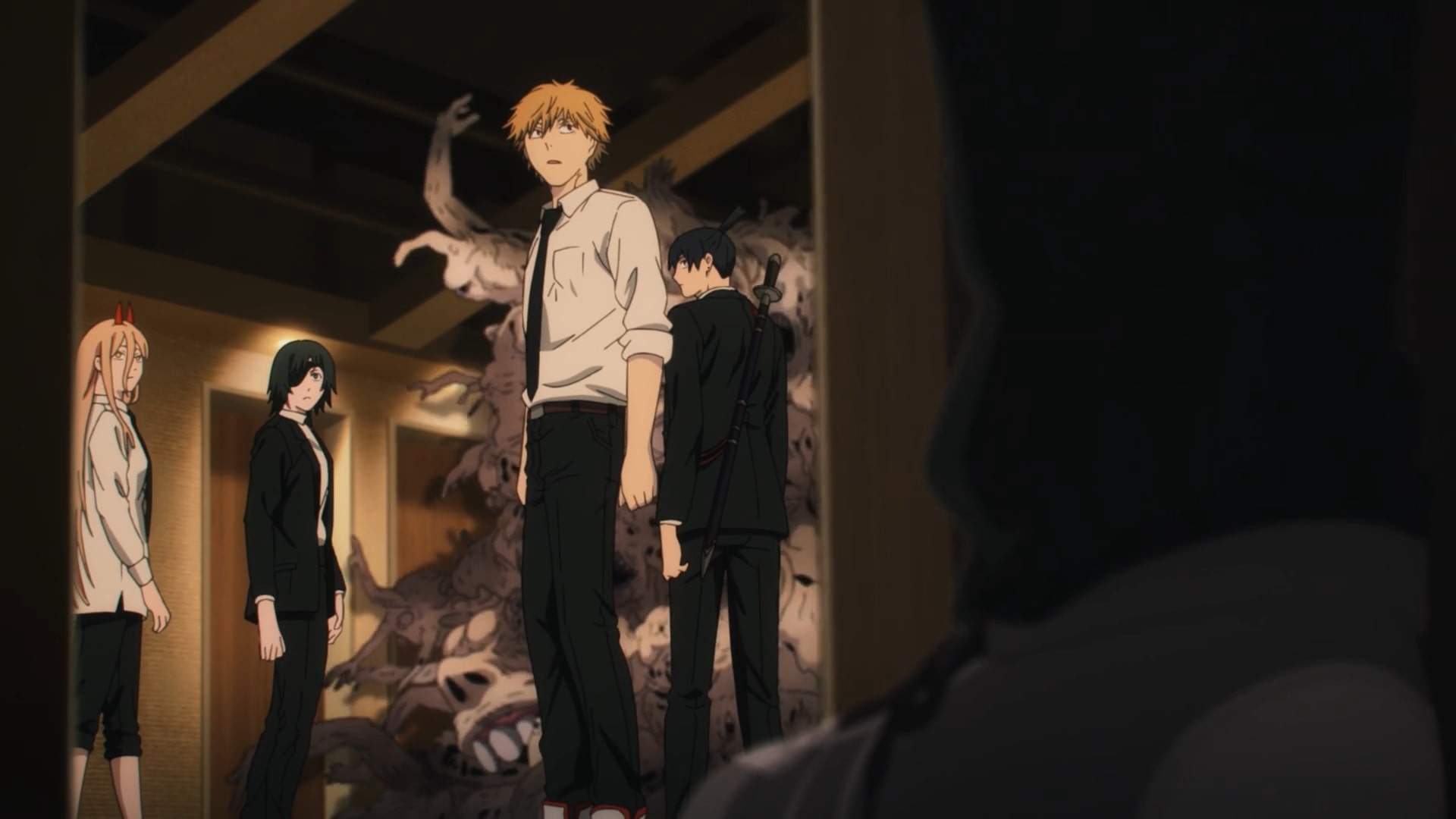 Kobeni suddenly emerges from her room and tells her teammates to agree to the contract and even goes as far as trying to attack Denji herself. Arai also agrees with Kobeni but Aki and Himeno refuse to make a compromise with their enemy who soon reveals himself to be the Eternity Devil. When nothing works in his favor the Eternity Devil turns the entire floor in one direction pushing the Devil Hunters into a corner and in a state of panic.

Chainsaw Man Episode 6 Ending: Is Aki Dead? Why Does Himeno Stop Him From Using His Sword?

After the Eternity Devil has cornered the members of the Public Safety Devil Extermination Special Division 4, Kobeni and Arai become completely paranoid. They try to put pressure on Himeno and Aki to accept the conditions of the contract that were presented to them but they continue to decline. However, Aki also understands that they are running out of time so he decides to use his sword instead. 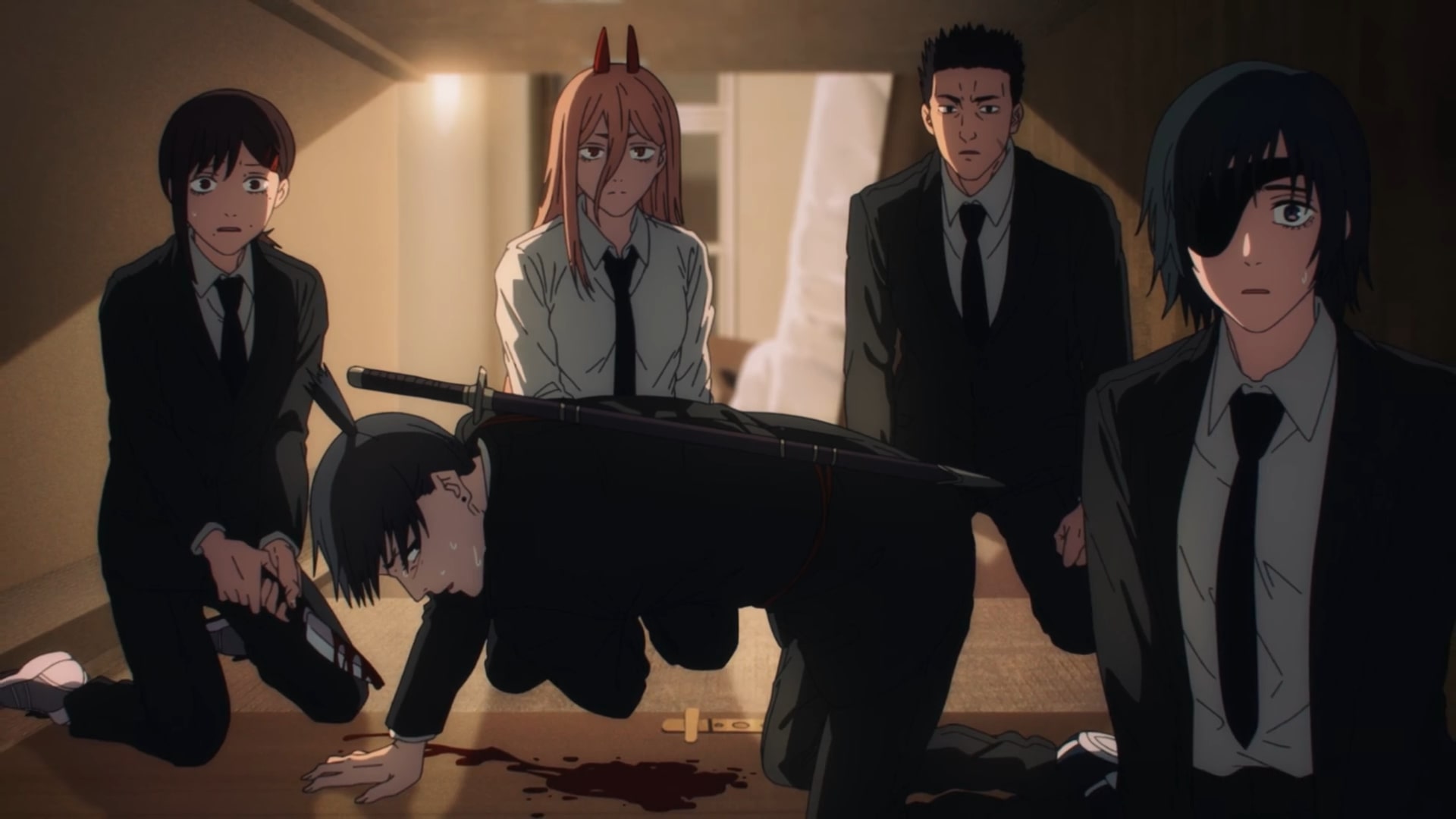 But Himeno interferes and does not let him do it. She then goes on to explain that Aki’s life will be shortened significantly if he uses the sword because of the contract that he has made. Since she knows that he plans to do a lot of things in the future, she does not want him to take such a drastic step. But Kobeni has had enough by this point and tries to stab Denji so that the issue can be resolved once and for all. However, she ends up accidentally stabbing Aki who jumps between the two to save the latter.

Aki starts bleeding profusely but Powers uses Blood manipulation to stop the bleeding. But it is not explicitly mentioned if there is any damage to his internal organs or any serious complications. Therefore, we looked at the manga series to find an answer. It turns out that the stabbing does turn out to be a serious problem but the injury is luckily not fatal and Aki will eventually survive it.

Does Denji Get Eaten by the Eternity Devil? How Does He Plan to Stop Him?

After Aki gets stabbed and manages to get his bleeding stopped only because of Power’s help, Denji starts feeling the pressure on him. Moreover, Kobeni continues to act paranoid which only adds to the overall tension in the room. Meanwhile, the Eternity Devil is preparing itself to devour Denji as soon as the opportunity presents itself. In all this chaos, Denji finally relents to the pressure and decides to offer himself to the devil so that the rest of the members of Public Safety Devil Extermination Special Division 4 can be saved. 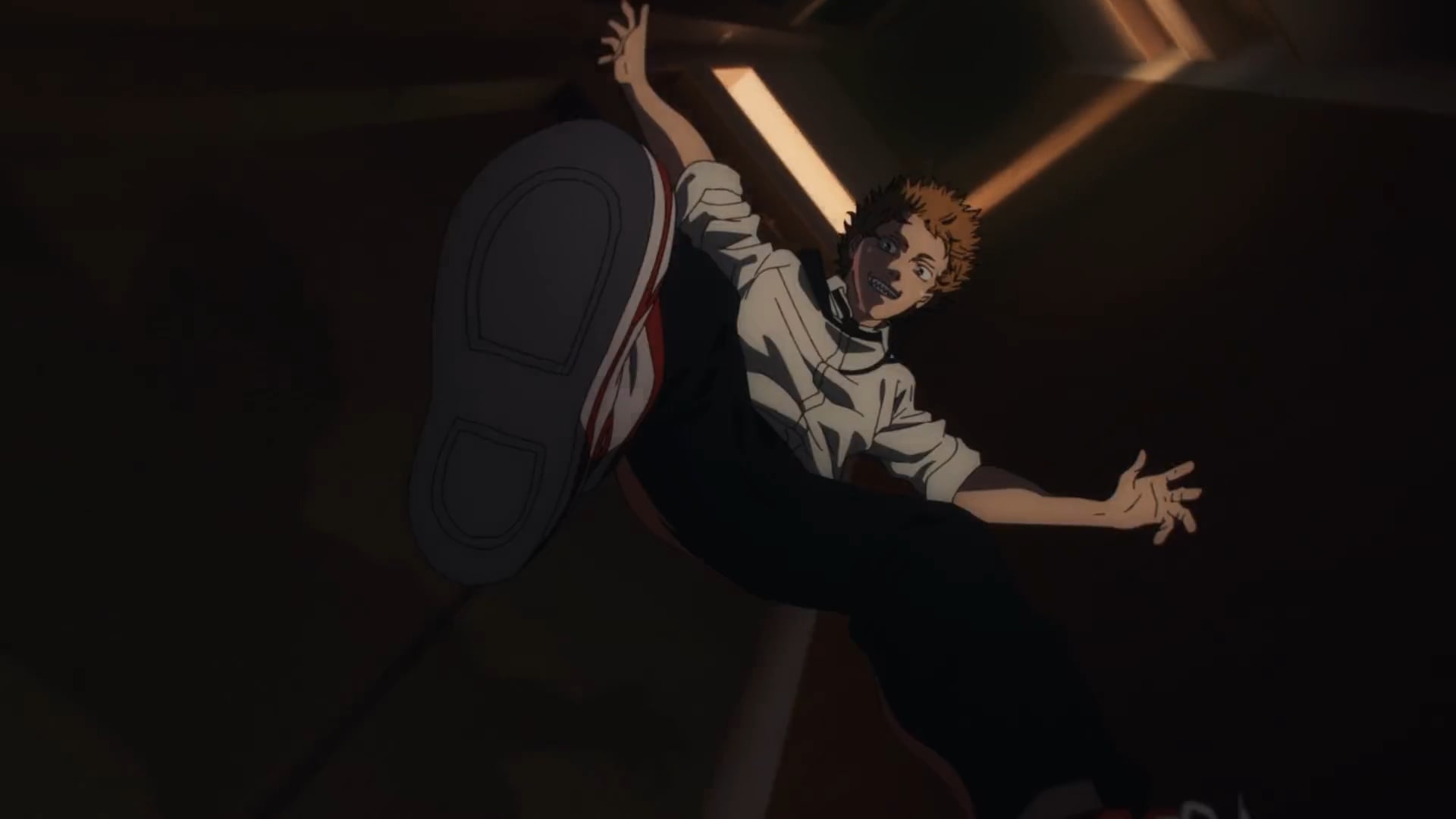 It is a courageous decision considering the fact that even Himeno has started panicking at this point. However, Denji does not plan to go down so easily. Although he plans to give the Eternity Devil a chance to devour him, he is also going to put up a fight until only one of them is alive. He recalls that the devil can get hurt when attacked. So even though he can’t kill him, Denji plans to hurt him so badly that the devil voluntarily chooses death. Furthermore, he also points out that the Eternity Devil is probably afraid of the Chainsaw which is why he asked others to kill him instead of getting his own hands dirty.

Although the plan is very risky and his chances of survival are low, Denji jumps straight inside the devil’s mouth and is supposedly devoured. The episode ends on an inconclusive note but Tatsuki Fujimoto’s manga series clearly states that Denji won’t die anytime soon. After transforming into the Chainsaw Devil, he will put his life on the line to get himself and the other five members of the Public Safety Devil Extermination Special Division 4 out of the mess they are in. The fans will have to wait for the upcoming episode to find out how exactly the battle unfolds.