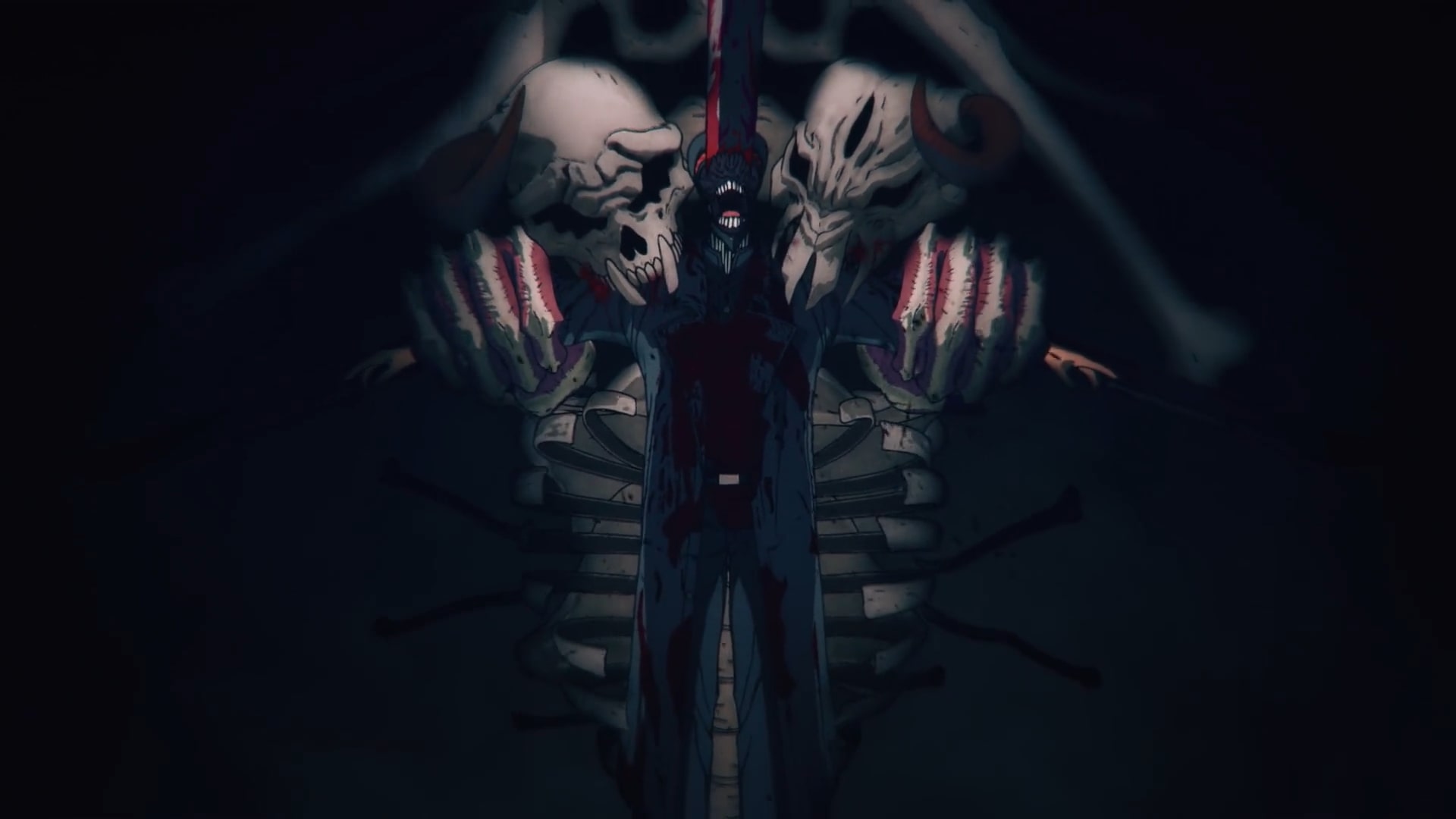 In ‘Chainsaw Man’ episode 8 titled ‘Gunfire,’ Himeno takes Denji to her apartment after the party, and the two end up making out with each other. However, Denji eventually rejects her sexual advances as he wants to lose his virginity to Makima. The following day Makima is going to Kyoto to meet the organization’s higher-ups when she suddenly gets shots by unknown assailants. It turns out that she is not the only target of the attack and soon other members of the Public Safety Devil Extermination Special Division 4 are targeted. Here’s everything you need to know about the ending of ‘Chainsaw Man’ episode 8. SPOILERS AHEAD!

After the welcome party is over, Himeno carries Denji to her apartment. While he sleeps on her bed, she takes a bath and by the time she returns Denji is asking for water. She sits on her lap and drinks beer. Himeno then goes on to kiss Denji passionately and he suddenly wakes up realizing what is happening. She then lays next to him and asks her colleague to have sex with her. 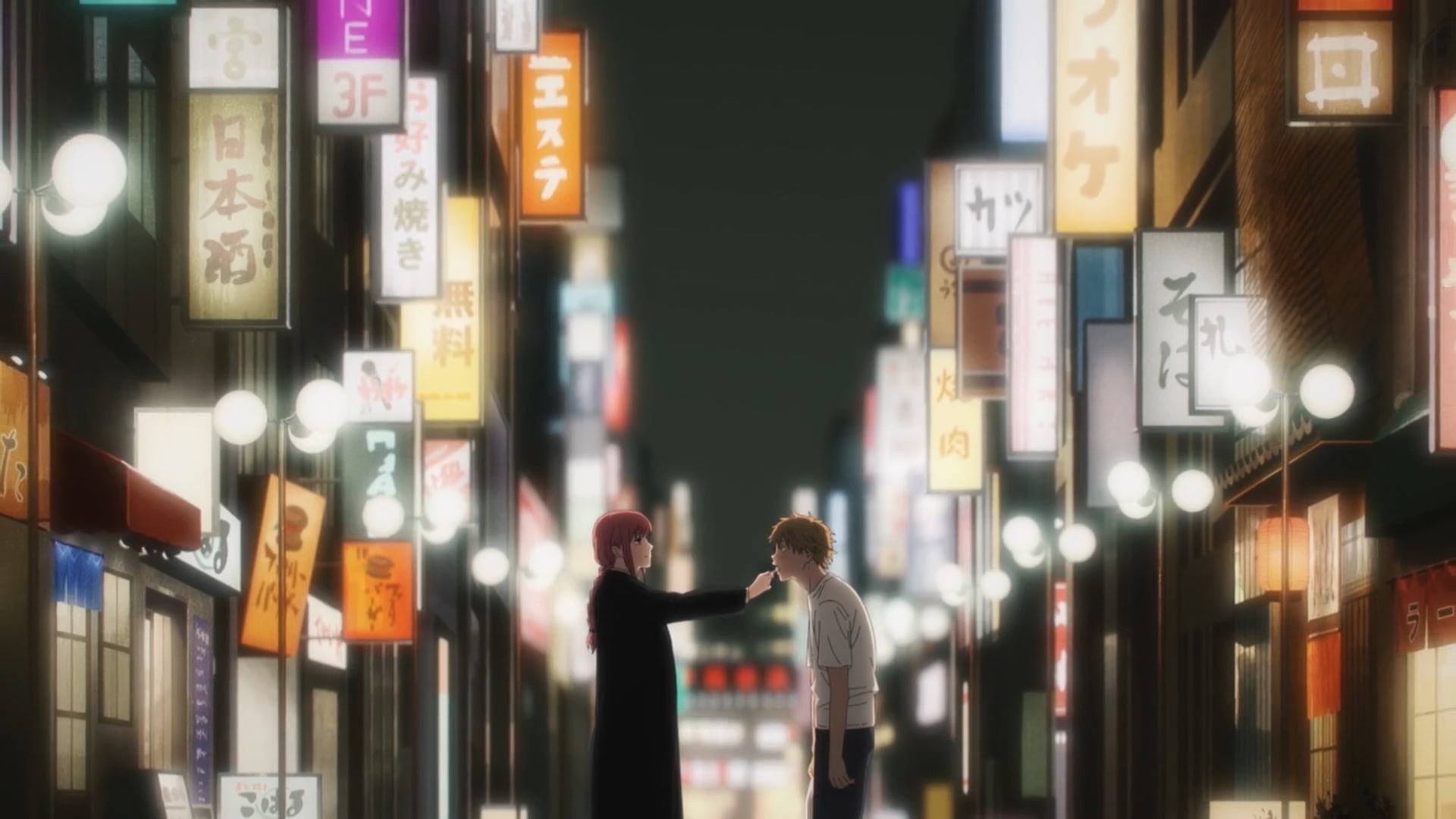 Denji can barely speak at this point and she proceeds to open his pants when she suddenly finds Chupa Chups (a Spanish brand of a lollipop) in his pocket. He suddenly recalls that Makima had given it to him and refuses Himeno’s further sexual advances. Apparently, Denji had decided to lose his virginity to Makima several days ago, so he keeps his word and plans to defeat the Gun Devil first so that he can finally ask his colleague for his not-so-secret wish.

The following day when the duo is having breakfast on the balcony, Himeno is relieved to learn that nothing happened between the two of them. However, when she manages to get a confession out of Denji that he likes Makima, she asks him to form a secret alliance with her. Himeno promises to help him get close to Makima on the condition that he helps her with Aki.

The day after the welcome party, Makima is on her way to Kyoto where she is going to attend a meeting with other her colleagues and the Public Safety Devil Hunters’ top brass. It turns out that she is afraid of the bigwigs coming for the luncheon and does not feel comfortable in their company as they are all scary. She recalls the party she had with her coworkers the previous night and appears to crave a much more relaxed life. While she is lost in her thoughts and is looking outside the window, the passengers sitting in the front and back seats suddenly stand up and shoot Makima and her colleague next to her from point-blank range. 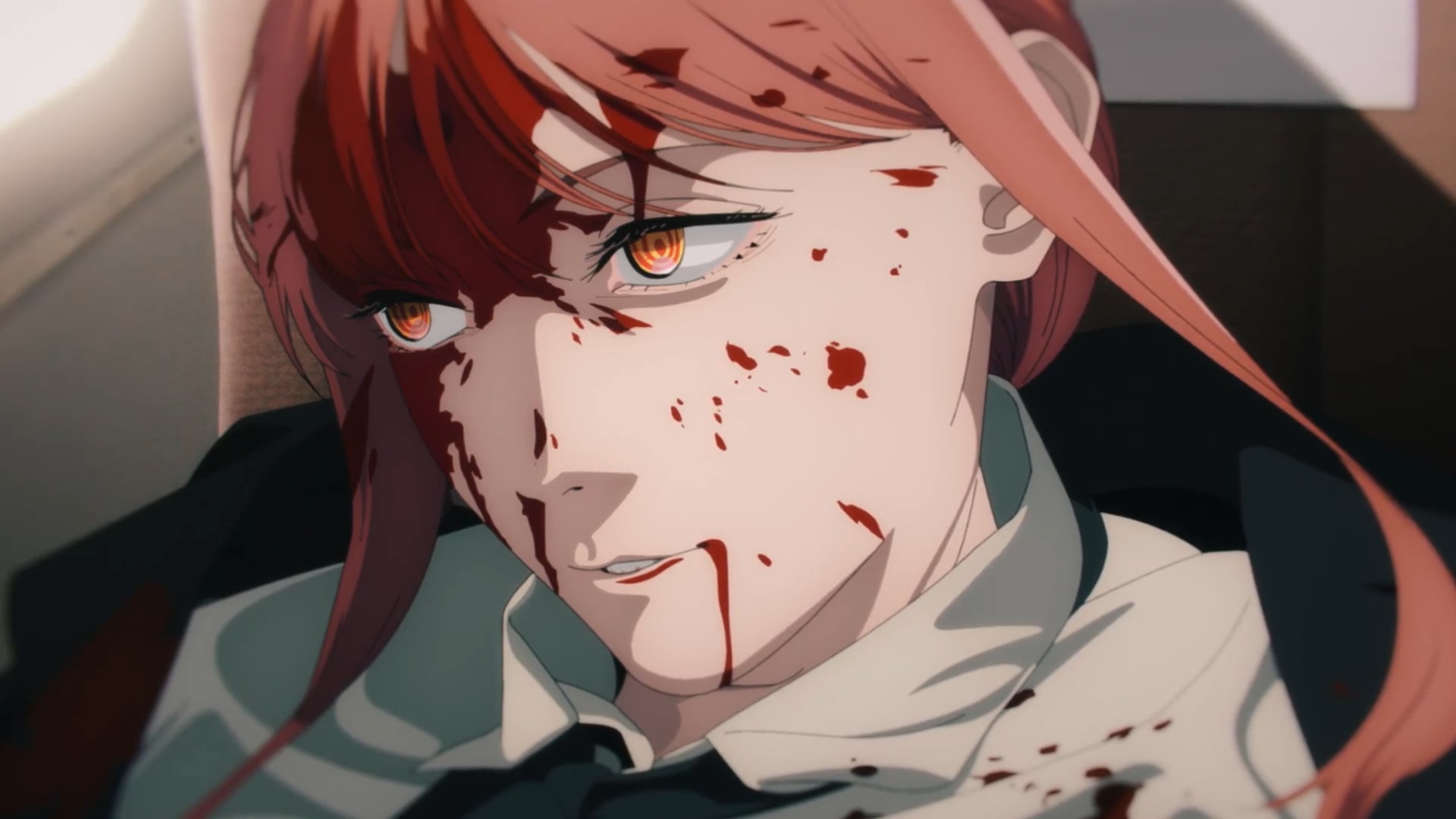 Although the first bullet appears to have gone through her head, the mysterious assailants (who are later revealed to be working at the behest of the Gun Devil) continue to unload several rounds until they are confident that Makima is dead. Her lifeless face appears to give the impression that she is probably dead too, but the story does not end here for her. While the secrets of her powers and her Devil contracts are a topic for another day, we can confirm (based on the manga) that Makima will not only survive the ambush but will soon play a crucial role in the next few arcs.

Who Attacks Denji and His Friends?

Once the assassins have done their job in the bullet train, they tell team C of their group to commence operations. An old woman asks Kobeni and Arai for some help after which they walk in opposite directions. While the two Devil Hunters are not looking back, the woman suddenly takes out a gun and shoots at the duo. The sound of the shooting reaches the restaurant where Denji, Aki, Power, and Himeno are having their breakfast. 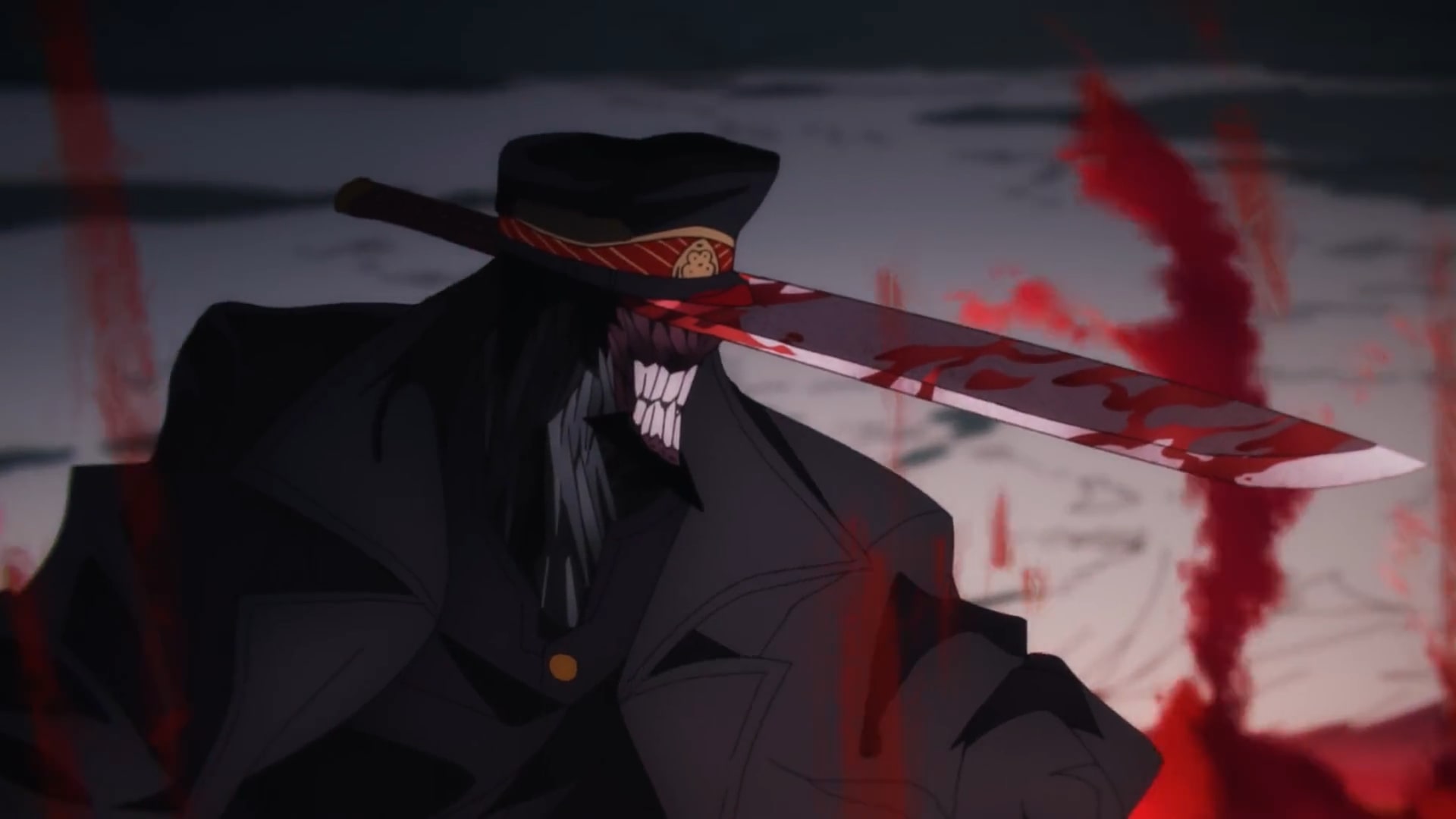 It is not revealed who gets shot and the next episode will shed light on the events that focus on Arai’s heroism and Kobeni’s nightmarish experience that will leave a lasting impression on her. Meanwhile, Denji is enjoying his food, and a man sitting on the other side of the room starts talking with him which infuriates Power. He goes on to talk about his dead grandpa who used to take him to fancy restaurants. Before Denji could comprehend what was happening, he is suddenly shot in the head by the mysterious man.

Aki responds immediately and feeds the assailant to the Fox Devil. However, the Fox Devil then tells Aki that the attacker he put in his mouth is neither a devil nor a man. It turns out that the mysterious assailant is actually the grandson of Denji’s former Yakuza boss, who made a contract with the Zombie Devil and ended up losing his life. Interestingly, he is a human-devil hybrid and is now known as Katana Man (aka Samurai Sword). His body is actually now integrated with the Katana Devil.

Does Himeno Die? What Happens to Denji? Does Aki Die Too?

The Katana Man soon manages to get out of Fox Devils’ mouth without many injuries. However, he then faces the wrath of Aki who uses his contract with the Curse Devil. Aki goes on to stab the Katana Man three times after which he gets cursed and dies a painful death. The contract takes away a significant part of Aki’s lifespan, but it appears that he is willing to put everything on the line for his colleagues in this dangerous situation just like in the Eternity Devil Arc. 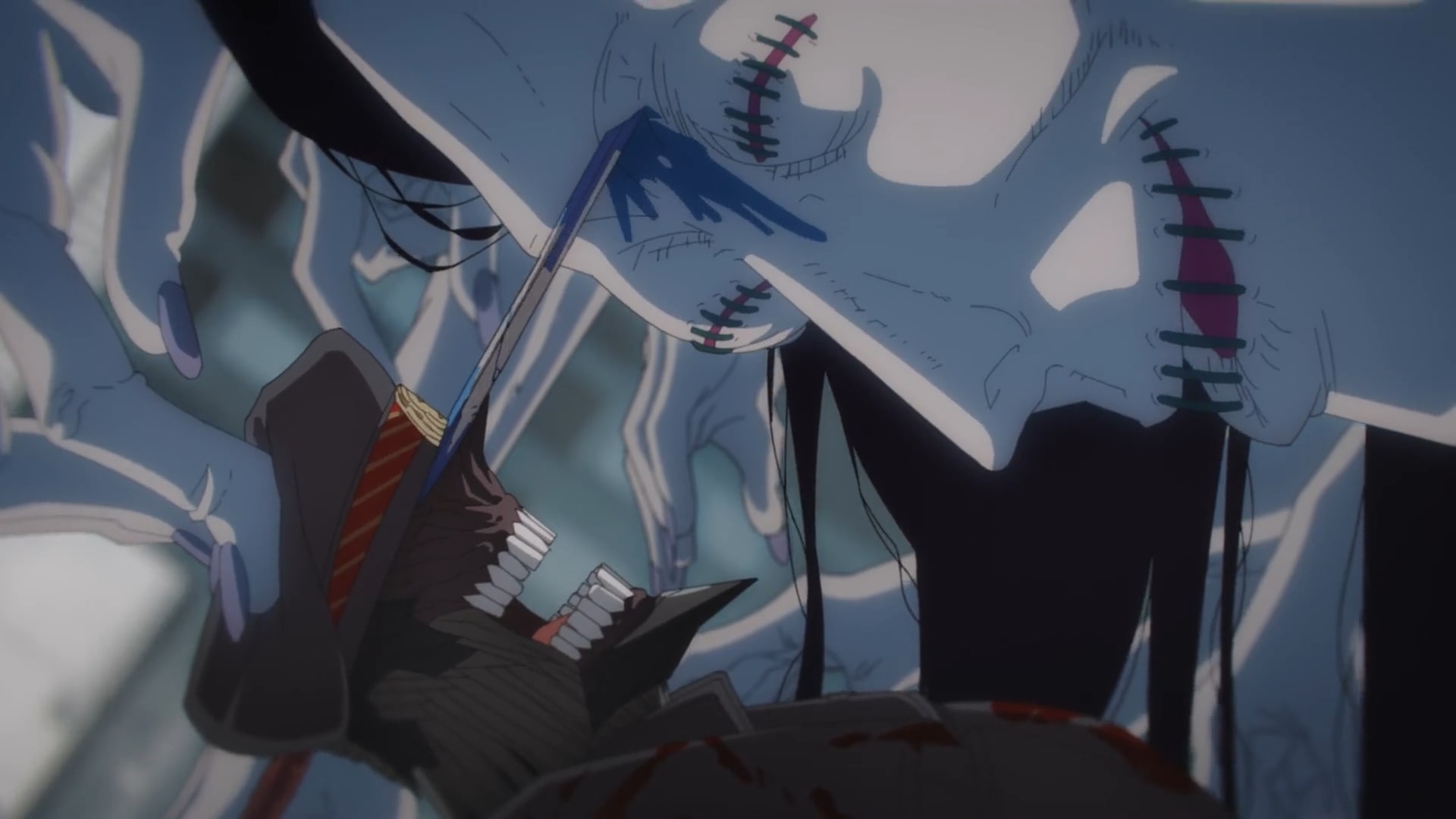 Unfortunately, that turns out to be a huge mistake as Katana Man’s mysterious accomplice arrives on the scene and revives him. As a visibly disturbed Aki prepares to fight again, the Katana Man easily leaves several devastating blows to his body even before he has any chance to move. Himeno got injured when the Katana Man previously opened fire and despite her requests Power and the Ghost Devil refuse to help her.

Determined to not let Aki die in front of her eyes, Himeno forms a new contract with the Ghost Devil and offers herself in return for the devil’s full powers. This turns out to be a bad decision as Katana Man and his mysterious accomplice kill the Ghost Devil soon afterward. Himeno’s body parts disappear starting from her hands and by the time Aki turns to take a look at his former colleague, only her clothes remain on the ground. 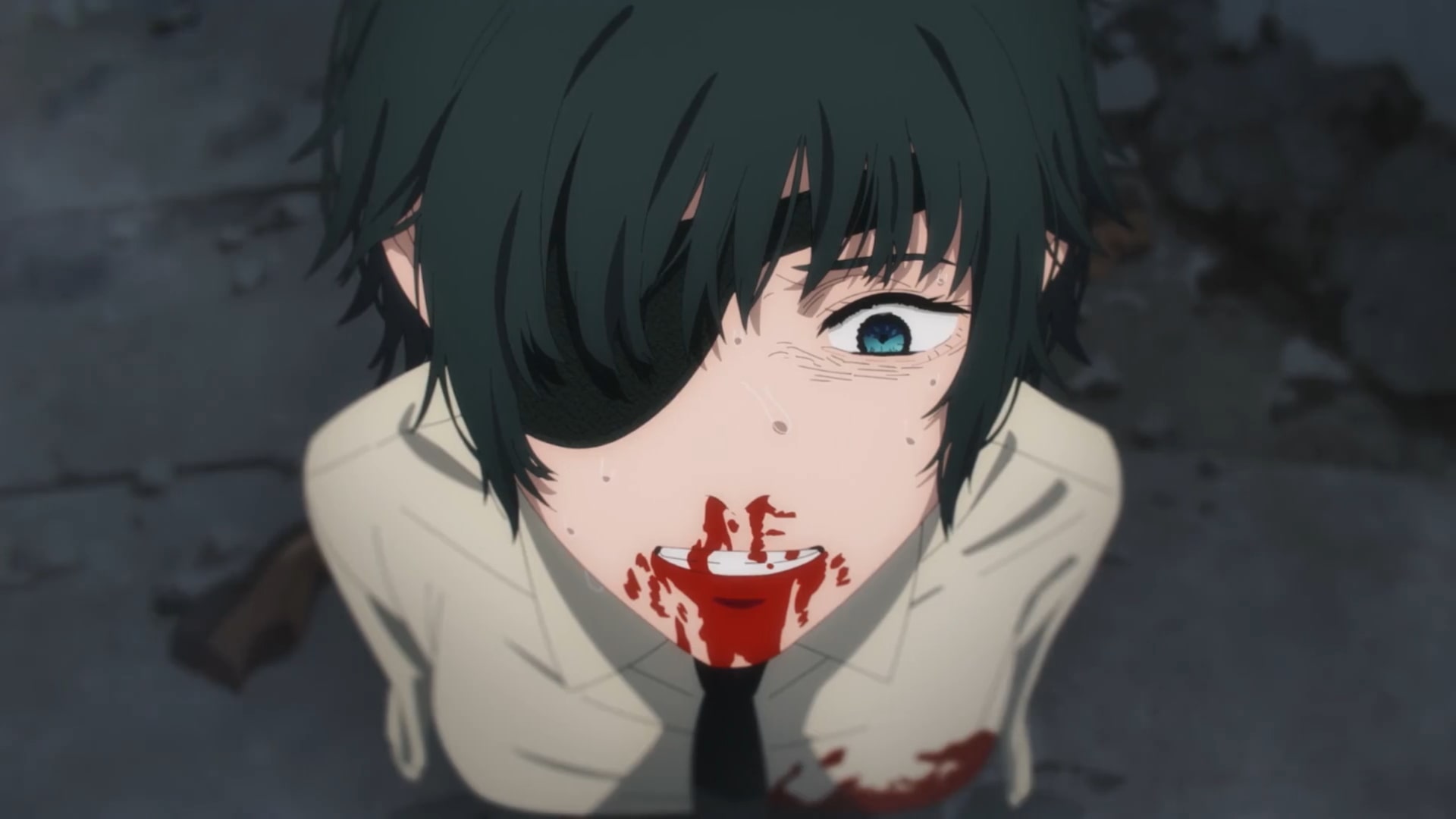 It is obvious beyond reasonable doubt that Himeno is dead at this point as no human could survive after offering themselves to a devil- regardless of the contract. This can be further confirmed by Tatsuki Fujimoto’s ongoing manga series. As far as Denji is concerned, he is severely injured but being a hybrid even a bullet wound to the head is not enough to take him out. Aki on the other hand is going to be a key character in the Katana Man, Bomb Devil, International Assassins, and Gun Devil Arc, so he too is not dying anytime soon, contrary to what his injuries might make it seem.