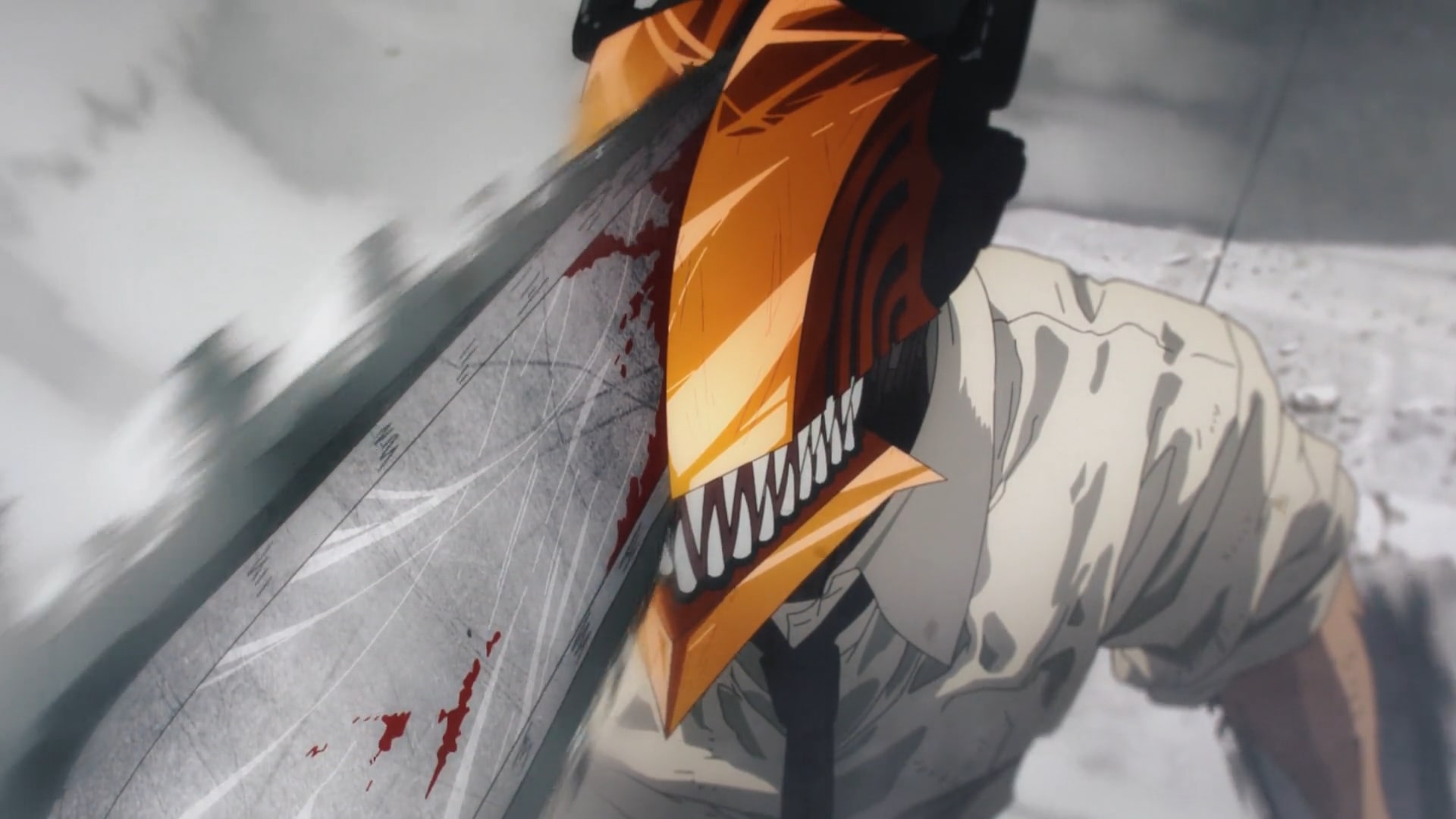 In ‘Chainsaw Man’ episode 9 titled ‘From Kyoto,’ the show follows Denji as he tries to fight the Katana Man after Himeno’s death. Meanwhile, it is revealed that Makima is still alive and she now prepares to help her comrades from Kyoto. Unfortunately, the Katana Man manages to cut Denji in half but as they prepare to leave, Makima begins to brutally murder them one by one. Here’s everything you need to know about the ending of ‘Chainsaw Man’ episode 9. SPOILERS AHEAD!

Just moments before her death, Himeno tells Aki not to die so that he can later shed tears for her. She tries to kill the Katana Man with the Ghost Devil’s help but Sawatari uses the Snake Devil to save her comrade. However, the Ghost Devil manages to turn Denji into the Chainsaw Man moments before she dies. Now, the Katana Man and Chainsaw Man unleash relentless attacks on each other. But when Denji tries to hold one of the attackers as hostage and asks others to stay back, the Katana Man cut both of them in two halves. 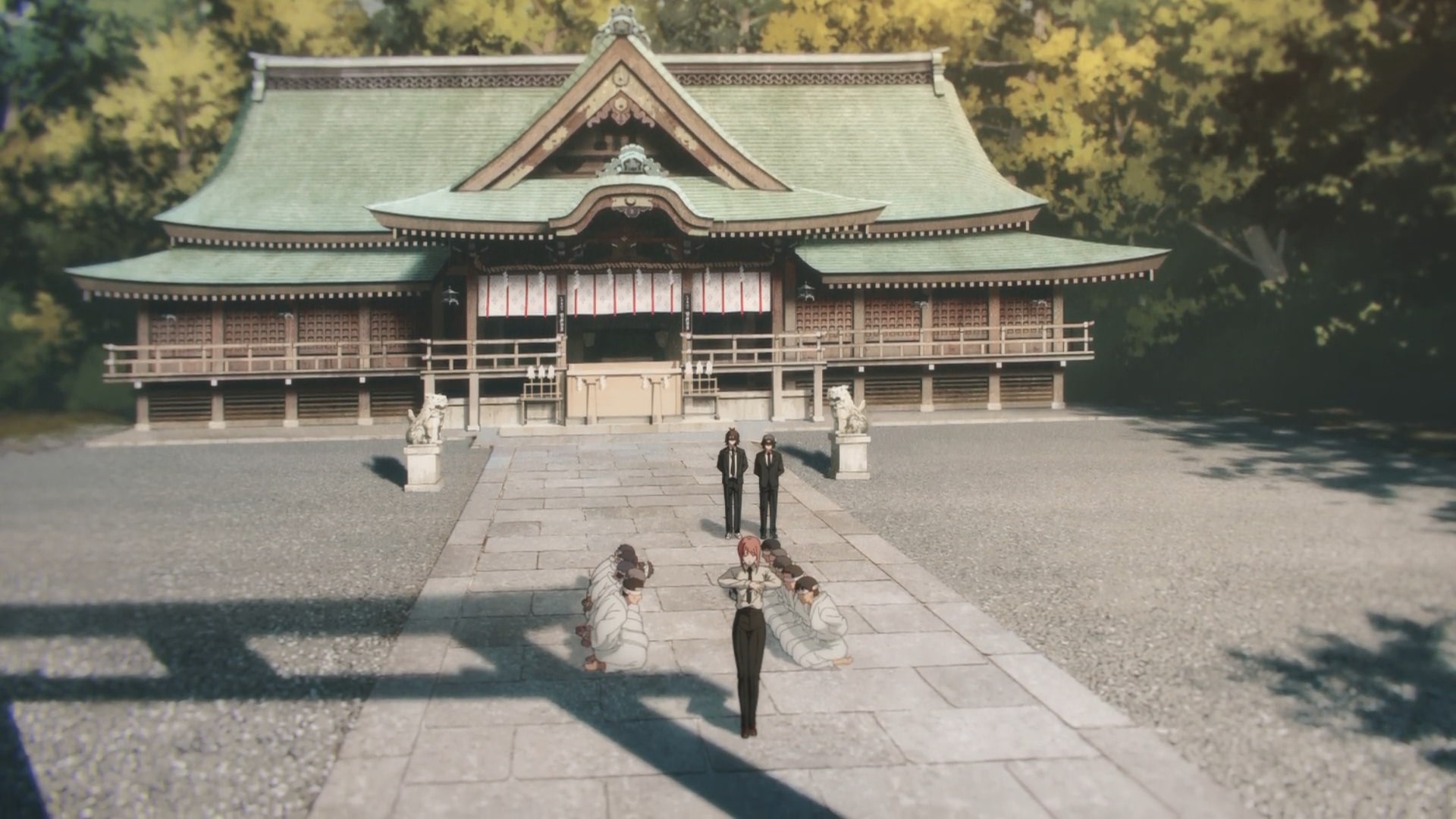 Meanwhile, Makima’s train finally arrives in Kyoto where Tendo and Kurose are waiting to receive her. When she walks out, there is blood all over her clothes, and for some reason, she lies that the blood does not belong to her. All the attackers are dead at this point and their bodies lay inside. Makima later asks for prisoners who are given life imprisonment or worse punishment but does not explain what she plans to do with them. Once they are provided to her at a secluded place, she uses her powers to literally kill almost all the murderers like flies. In the meantime, Tendo and Kurose like the prisoners (who supposedly die like the attackers) are wearing blindfolds to keep Makima’s devil contracts a secret.

After every single killer who ambushed Division 1, 2, 3, and 4 is killed except for the Katana Man and Sawatari, Makima tells Tendo and Kurose that she will now head to Tokyo immediately. At the train station, Madoka hands over his resignation letter to Makima. Meanwhile, Sawatari and Katana Man are shocked by the death of their accomplices but have not given up hope of dragging Denji into their vehicle and running away with him. However, they are surprised at Kobeni staring at them with vengeance in her eyes from another end of the road. 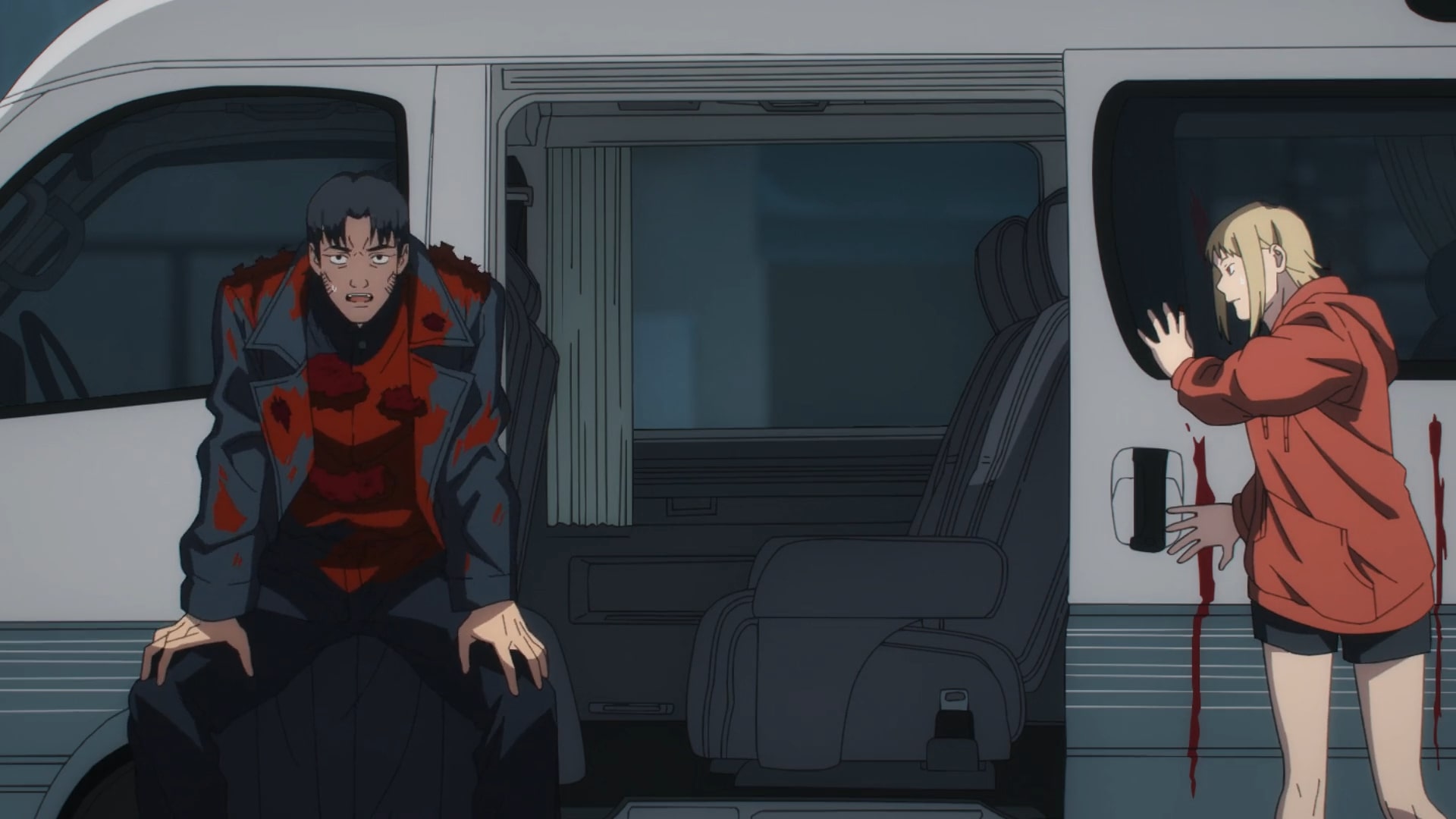 Sawatari immediately recognizes her as a threat and tries to use the snake devil to kill her on the spot. But Kobeni easily evades the incoming threat and closes the distance between her and the enemies. Katana Man is not in a state to fight back, so she easily manages to cut his hand off. She then proceeds to shoot him a few times. Sawatari also starts shooting back at her but Kobeni uses Denji as a shield and continues to fight back. Despite her best attempts, Sawatari manages to flee with the Katana Man.

Chainsaw Man Episode 9 Ending: Is Denji Dead? What Happened to Arai? Why Does Kobeni Resign?

Denji has not moved an inch since he was cut in half by the Katana Man and seeing so many deaths so far, Kobeni appears paranoid. She recalls how the old woman had approached her and Arai for help. But after they walked in opposite directions, she suddenly shot at them. The bullet hit Arai in the neck and as a reflex response, he turned immediately to save his colleague. The second bullet gave Arai a fatal wound and he died on the spot. 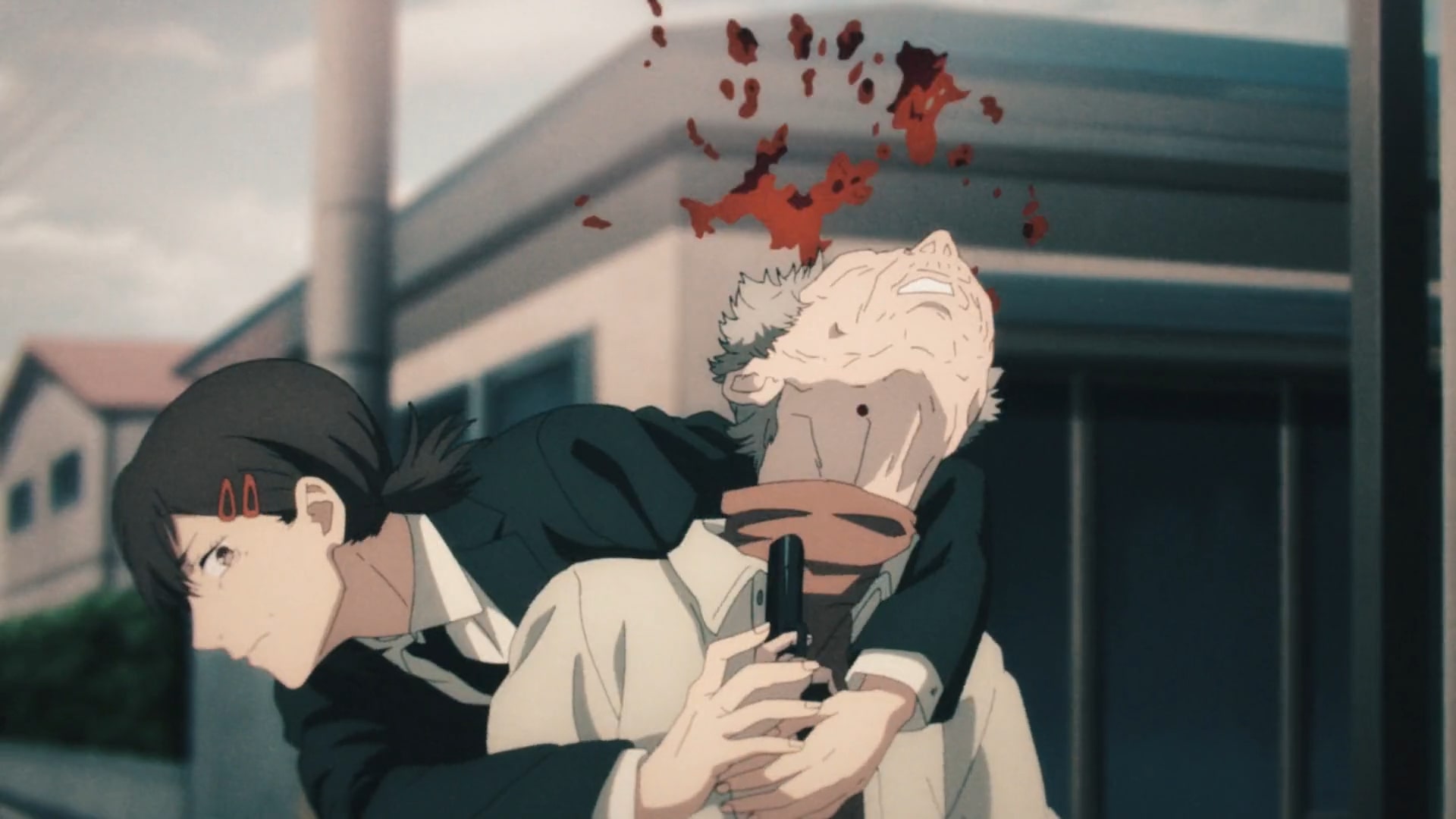 However, before the old woman could kill Kobeni she ran in her direction and managed to exterminate her. But seeing Arai’s body lying in the pool of his blood appeared to have left a deep psychological scar on her. This was an especially haunting incident after what had happened in the Eternity Devil Arc where she had tried to kill Denji to save her own life. Now she was regretful and after Sawatari was gone, she kept apologizing to Denji who was still unresponsive.

Kobeni’s paranoia is understandable, so it’s not shocking that she has decided to resign and leave her job at the Public Safety Devil Hunters. However, it is important to address Denji’s situation at this point. While Kobeni is having an emotional breakdown, Denji is lying in her arms still unresponsive. Now many viewers will be intrigued and would want to know if he is dead or alive. Looking at his condition and the blood loss he has had so far, it would seem logical to conclude that Denji is not alive anymore. 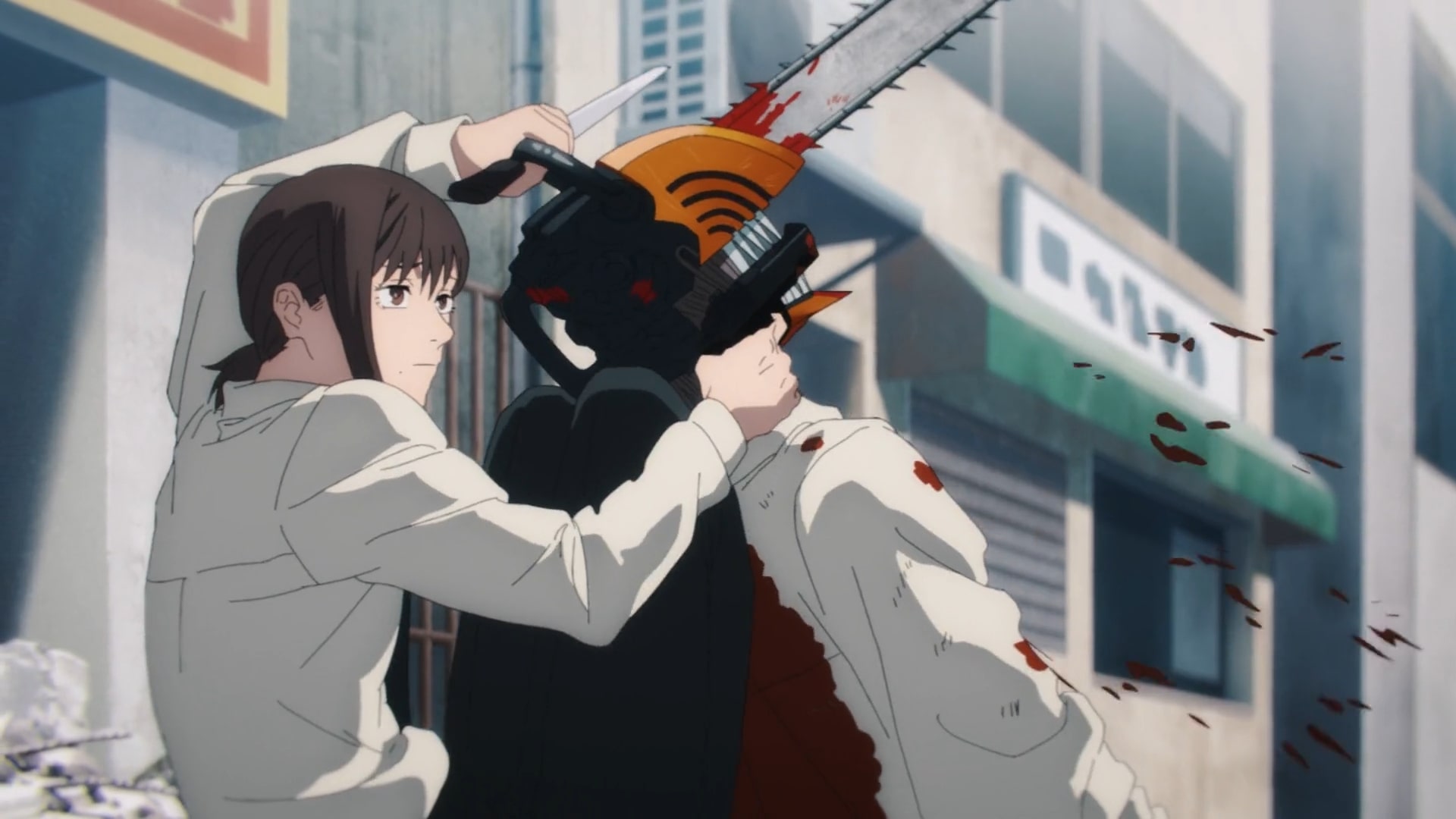 However, it is important to remember that Denji is a hybrid. Just barely an hour ago he was shot in the head but managed to stay alive and went on to fight the Katana Man as well. Hybrids are naturally stronger than humans and possess superhuman abilities which make it harder to kill them. This holds true in Denji’s case too as we have witnessed in the past. So he is obviously not going to die as of now and another reason for this conclusion is the fact that the show literally revolves around him. So, his death at this point in the story does not really make sense.