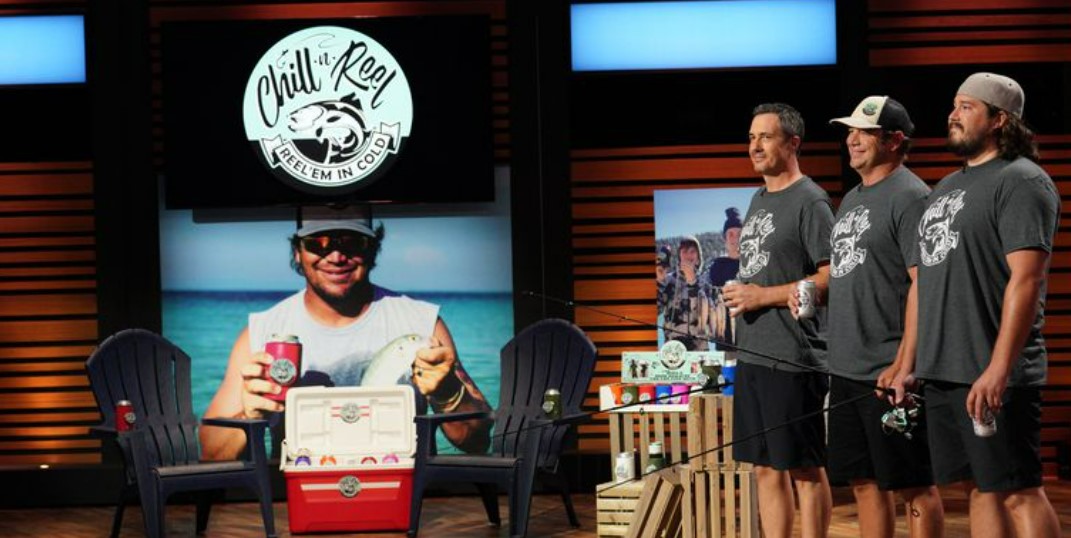 ‘Shark Tank‘ is a popular reality TV series where entrepreneurs pitch products and business ideas to a panel of investors known as the Sharks. Once the pitch is done, the Sharks decide whether they want to make an investment in the business. The show is brimming with great ideas and budding entrepreneurs, and season 13 is no different. In episode 23 of the season, Jake Rutledge, Chase Terrell, and Chris Diede present their product Chill-N-Reel, an innovative way to enjoy fishing. So, let’s find out more about the company then, shall we?

Chill-N-Reel: Who Are They and What Do They Do?

The idea for Chill-N-Reel came to Jake Rutledge in 2017 when he was on vacation in Destin, Florida. At the time, he was waist-deep in the waters of the Gulf of Mexico, having a good time. Jake then noticed there were fish everywhere and hoped to catch them. While he didn’t want to bring any extra attention to the area, he also didn’t want to put down the drink in his hand.

So, Jake tied some fishing line at the bottom of the koozie, holding his drink. But as he tried to pitch it out and reel it in, he kept spilling his drink. The initial motivation for Jake’s product was for a design that would allow the person to catch fish while still keeping the drink from spilling. As soon as he returned home to Oklahoma, Jake worked on the idea, coming up with an initial product design.

Jake, a firefighter for more than two decades, always had side jobs like lawnmowing and restoring fixer-uppers to help care for his family. The father of three gave up everything else to work on an idea he believed in. The result was Chill-N-Reel. The product is essentially a drink holder that works as a fishing rod as it comes with a fishing reel attached. It has about 50 ft of 8 lb test line wound to the side in addition to a hook and sinker and a removable insulator.

All the user has to do is place the drink into the holder (which holds standard 12-oz cans and bottles) and then pitch the bait into the water, waiting for a fish to take the bait while one enjoys their drink simultaneously. While Chill-N-Reel isn’t for the serious anglers – as Jake stated – it’s a fun way to catch some fish while on vacation or a trip. As the owner and head of operations, Jake wanted to truly make it a family business.

Jake’s son, Chase, who has a background in sales, helps with the pitches. In fact, he is the one who applied to be featured on ‘Shark Tank.’ Chase previously worked for the Los Angeles Dodgers AAA organization and a start-up. Finally, Jake’s brother-in-law Chris came on board in 2020 to help with the e-commerce part of the business. With a background in marketing, he is an entrepreneur himself.

Jake planned to present the product at several outdoor shows in different states, but the pandemic put a dampener on that in 2020. At that point, Chris helped with selling Chill-N-Reel online. The move was successful, and within ten months, they had more than $1 million in online sales. Today, Chill-N-Reel is available on the company website as well as in other e-commerce stores such as Amazon and Walmart. The product was also featured in publications like Forbes, HuffPost, and Today.

The Chill-N-Reel patented hard shell drink holder is available for $14.95 and comes in multiple colors. It has everything one needs to start fishing, including an instructional booklet to make things easier. The company’s online store also sells spare hook and sinker packs starting from $0.49. Not just that, interested customers can buy merchandise that includes vinyl stickers, T-shirts, tank tops, and hoodies. Furthermore, the people behind Chill-N-Reel continue to visit shows across several states, setting up stalls there.