Ciara Chyanne Morgan From Making The Cut: Everything We Know 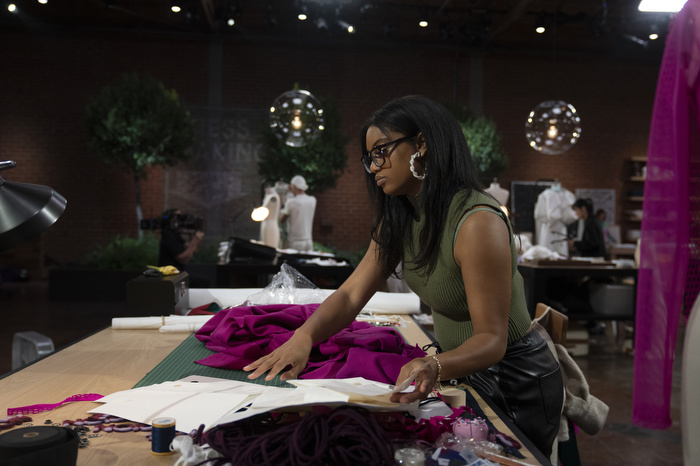 If you have ever been interested in the work that goes behind the design of a specific apparel, Prime Video’s ‘Making The Cut‘ would be right up your alley. The exciting competitive design reality show brings together a group of talented young designers from around the world and has them battle it out for glory. The contestants go through a series of increasingly difficult challenges that are designed to test their grit, determination, talent, and technique. Besides, at the end of each challenge, the show eliminates one designer until the last one standing is crowned the winner.

Ciara Chyanne Morgan appeared to be a promising contestant on ‘Making The Cut’ season 3 and was determined to leave a lasting impression on the judges. Moreover, fans got interested in her once Ciara revealed that she started out as a self-taught designer before building up her expertise through different courses. Nevertheless, with the cameras now turned away, we decided to jump in and find out everything there is about Ciara Chyanne Morgan.

Like many of her co-contestants, Ciara is quite reserved about her age, but reports mention that she was born and brought up in the city of Watts in Los Angeles County, California. Unfortunately, she doesn’t share a lot about her family. However, from the looks of it, Ciara has maintained a close bond with her loved ones and is grateful to them for their contribution to her success. Besides, while Ciara prefers privacy and hasn’t talked much about her family in the public sphere, she is very much a family person and still manages to take time out of her busy schedule to spend with her close ones.

After graduating from high school, Ciara chose to pursue a course in Fashion History at Woodbury University. Yet, in 2011, she enrolled herself in the bachelor of science in sales and marketing course at Tuskegee University. However, by this time, Ciara knew that design was her passion and was determined to make a career in the fashion industry. Thus, while she started out as a self-taught designer, Ciara soon undertook a fashion illustration and sewing course from the Otis College of Art and Design before stepping into her professional life.

Although Ciara started her professional journey by working in retail during her university days, she went on to take up the position of a Product Stylist at HauteLook right after her graduation. Since then, the excellent fashion designer never looked back as she joined the Kellwood Company as a Fashion Design Assistant in June 2018 but was soon promoted to a Junior Associate Designer in October 2019.

Subsequently, in January 2021, Ciara left her previous employer and joined Shon Simon Co. Manufacturer as a Fashion Design and Development Director. At present, Ciara has left her position at Shon Simon Co. Manufacturer and is working as a Product Development Coordinator at Sunrise Brands. At the same time, she owns and operates her own successful Los Angeles-based fashion brand Ciara Chyanne.

Interestingly, not only does Ciara focus on her own exemplary creations through her brand but has also worked as a consultant for other companies. Besides, fans would be delighted to know that Ciara’s work in the fashion industry hasn’t gone unnoticed as she has been featured in several prestigious publications as well as TV shows. Moreover, her creations have also been worn by famous personalities, and in 2022, Ciara received Visa’s She’s Next In Fashion grant.

Is Ciara Chyanne Morgan Dating Anyone?

Unfortunately, Ciara’s preference for privacy has kept her from discussing her dating life publicly. The Los Angeles-based fashion designer prefers to stay below the radar and even refrains from posting about her personal life on social media. Thus, while the lack of a romantic partner is quite apparent in her social media posts, Ciara hasn’t been linked to anyone recently, making us believe she is single and wholly focused on her career.

Read More: Emily Bargeron From Making The Cut: Everything We Know