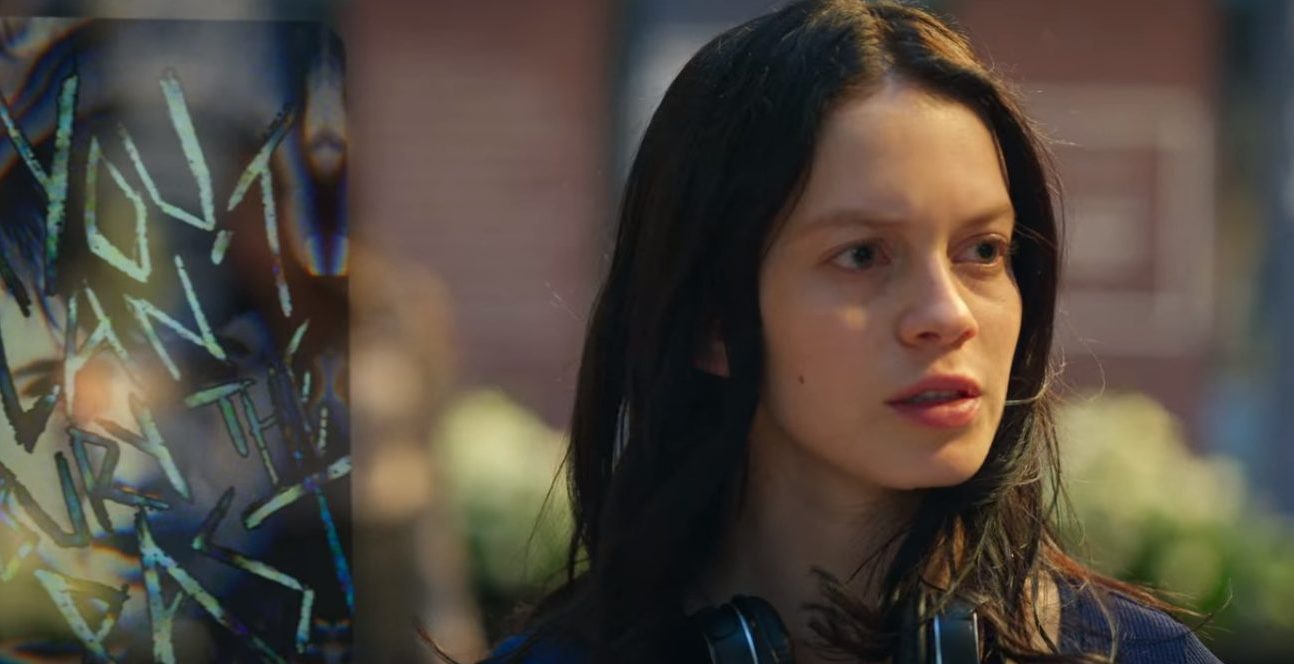 Netlfix’s ‘Control Z’ follows the violently dramatic lives of the students of the National School, who are still reeling from one of their classmates being shot and left bleeding on the streets. Luis’ recent death also hangs heavy in the air, and the students are once again tormented by a mysterious individual bent upon exacting revenge for the death of their classmate.

Things get more intense in the follow-up season as the attacks are not just limited to social media. People are beginning to get hurt in real life, and many of them almost die. The rooftop season finale also doesn’t disappoint and hints at another brutal death. We hope you’re ready to delve into the messy and dramatic world of ‘Control Z’ season 2 and take a closer look at its ending. SPOILERS AHEAD.

Season 2 picks up immediately from the previous season, with Javier bleeding on the street after being accidentally shot. The medics arrive to take him away, and we are then taken 2 months forward, where regular school life seems to be slowly resuming at the National School. However, at a memorial for Luis, the students all begin receiving ominous videos with the late student’s face superimposed with the text “You Can’t Bury the Past.” Panic ensues and, soon, Alex is found tied up in an empty classroom. Dario and Ernesto are also kidnapped and buried alive in a cemetery but are saved by Sofia’s quick thinking.

Meanwhile, Raúl decides to return to school and is repeatedly beaten up by the students whose lives he’s destroyed by leaking their secrets. The school principal, Quintanilla, is unable to expel the psychopathic student since Raúl still holds incriminating details about the principal’s affair with a teacher (Susana). The wealthy son of a politician, whose parents have since been arrested, lives alone in his abandoned mansion where he is also harboring Gerry, who is on the run after accidentally shooting Javier. Raúl is also seen at many of the sites where students are assaulted but manages to convince Sofia that he is not the “avenger” who is harming students as revenge for Luis’ death.

Throughout the chaos in school, Sofia and Javier continue their tumultuous friendship and also actively investigate the avenger, trying to uncover his identity. A visit to Luis’ home reveals that what is happening to the students (being tied up, buried alive, given poison, etc.) is all depicted in the late student’s drawings. Therefore, it seems like the school’s mysterious tormentor is also fulfilling Luis’ wishes. The only crime that doesn’t fit in with the drawings is the assault on Raúl, during which the mysterious attacker makes off with all the money in the obscenely rich boy’s safe.

Control Z Season 2 Ending: Who is the Avenger?

Sofia soon finds herself targetted by the avenger, who switches the pills in her bottle. It is then revealed that she did not, in fact, swallow the pills and only did it to mislead the mysterious tormentor. The avenger is finally revealed to be Alex, who blackmails Gerry and Raúl to come to the school building at night, where she forces Gerry to post an apology video to Luis. Still unsatisfied, she then points a gun at Gerry and runs an online poll, asking students whether he should be allowed to live or die. The results come in, and the poll is in favor of the young student dying. Seeing the online posts, Sofia and Javier rush to the school roof and attempt to calm Alex down.

While the tense situation plays out on the roof, Maria and her friend break into Luis’ locker, where they have been told that the attacker has hidden the money stolen from Raúl. They are apprehended by Susana, who has since replaced Quintanilla as the school principal, and are taken to the roof. The principal is shocked to see the dangerous standoff playing out atop the school building and tries to control the situation. Soon, however, a scuffle over the bag of money breaks out, which results in Susana and the bag of money falling over the edge. The season closes with Pablo coming across the school principal’s grievously injured body. He hurriedly collects the bag full of money that has fallen next to her and makes off with it, leaving her bleeding on the sidewalk.

Therefore, the avenger who has been tormenting the school students since Luis’ death is finally revealed to be Alex. As Sofia notes at the beginning of the show, Luis was one of the few people Alex ever bonded with, and though she didn’t show it, she felt significant remorse for the blameless student’s death. Her primary objective for tormenting and harming the students and faculty was to make them feel as bad as she did and not merely to continue their carefree lives without acknowledging the tragedy. She was also a fan of Luis’ art, which is likely why she based her attacks on his drawings.

Interestingly, none of Alex’s plots, though designed to be fatal, actually killed anyone. Sofia reads into this and realizes that though the angry student wanted to make her classmates pay, she never wanted to hurt any of them. Even when Alex gets the chance to kill Gerry — the boy directly responsible for Luis’ death — she doesn’t go through with it and makes an online poll so that the student body as a whole can decide his fate. When there is overwhelming support for Gerry to be put to death, she still doesn’t kill him but instead threatens to shoot him if he doesn’t jump off the school building. Alex, therefore, is not the vicious psychopath that people expect the avenger to be but is just a student who cannot find an outlet for her overwhelming grief and guilt.

Why Does Alex Feel Guilty for What Happened to Luis?

Luis and Gerry’s back story is revealed near the end of season 2 and is truly touching. Having so far seen Gerry only bullying the timid Luis, we are shown in a flashback how the two were almost friends. Luis secretly drew a detailed portrait of Gerry, which Alex convinced the shy boy to share with his friend. However, the portrait was later noticed by Gerry’s belligerent father, who disregarded it as a “queer boy’s fantasy.” Feeling insecure about what his friends might think, Gerry began to bully Luis at school, which eventually escalated to a fatal fistfight. This also explains why Gerry reacted so violently to rumors about him being attracted to other men.

Alex, whose idea it was for Luis to share his drawing with Gerry, feels responsible for all the subsequent tragic events. To add to her guilt, she was also the one to unlock Gerry from the classroom he was confined in, which directly resulted in him arriving in time to catch Luis and beat him up. Alex, at the time, was being blackmailed (by Raúl) and was forced to let Gerry out, but still feels all the more responsible for Luis’ tragic fate.

Another significant factor in Alex’s crime spree is her breakup with Gabriela, who used to be a teacher at the National School. Ever since we’ve known about it, their covert relationship has been tumultuous. The final blow comes when Gabriela decides to move to Spain while Alex, with no means to support herself, has to stay behind in Mexico. As is eventually revealed, the high school student then steals all of Raúl’s money so she can afford to run away with her lover.

It is through this heartbroken haze that Alex carries out her sadistic (but possibly well-meaning) plan. Outrageous crime in the name of love is one of the show’s subtle but deeply entrenched themes, which is also echoed by Sofia’s father when he says, “The worst mistakes are made because of love.” In season 1, Raúl’s heinous actions are motivated by his attraction towards Sofia, and in this season, Alex’s feelings towards Gabriela drive her.

Is Susana Dead? Who Takes the Money?

Though not explicitly stated, it looks like the school’s new principal, Susana, dies at the end of season 2. Having fallen over the side of the roof amidst a scuffle for the bag of money, she seems to have cracked her skull and is last seen on the sidewalk bleeding profusely from her head. If she is, in fact, dead, it implicates everyone on the roof in her murder. This includes Sofia, Javier, Raúl, Gerry, Alex, Maria, and her friend.

The bag of money that falls along with her is picked up by Pablo, who has been expelled from school for repeatedly beating up Raúl. The violent student is seen picking up the bag of money by Sofia and the others on the roof, and he, in turn, sees them. Therefore, all those present now know some horrible secrets about each other. Interestingly, a few hours earlier, Pablo had finally agreed to get over Raúl’s betrayal and stop attempting to harm him. However, by taking all of the wealthy boy’s money that was in the bag, it looks like Pablo finally got his revenge on his former friend.

What Happens to Natalia?

Throughout season 2, Natalia struggles to pay back the drug dealers whose drugs she lost during the National Night Party. Despite trying multiple ways, including accosting older men and blackmailing them, she remains unsuccessful in repaying her debt and is eventually kidnapped. Her fate remains unknown, but the men that have picked her up are clearly ruthless.

We can also gather that she owes them a significant amount of money as even the box full of cash that Javier gives her doesn’t cover the debt. It is to save Natalia that her sister Maria attempts to steal Raúl’s money from the school locker. However, the money ends up with Pablo, and therefore, with the money for Natalia’s rescue gone, the fate of the high school’s former “popular girl” remains uncertain.

What Happens to Sofia’s Father?

Sofia’s father is revealed to have pretended to be dead so that his wife Nora could claim the insurance money and live comfortably with their daughter Sofia. Despite him being on the run and Sofia carefully guarding the secret even from her mother, Raúl’s leak eventually makes public the fact that he is alive. The police subsequently raid Nora and Sofia’s house, and a lot of their personal belongings are confiscated. In a truly heartbreaking twist, an embittered Nora gets her former husband to reveal himself and then has him arrested. Therefore, at the moment, Sofia’s father is in prison for insurance fraud.

Read More: Is Control Z Based on a True Story?