‘Cooking with Love’: All You Need to Know 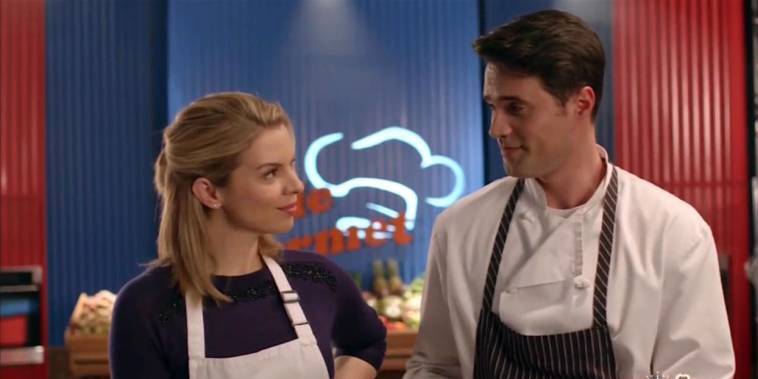 ‘Cooking with Love’ is a romantic dramedy that follows Kelly, a kid reality cooking show producer, who is looking for an urgent replacement for the show’s host Chef Betty, who makes an abrupt exit after suffering a back injury while shooting. Since it’s an emergency, Kelly has to choose renowned Chef Stephen Harris. Stephen is acclaimed for his culinary skills and food mastery but his temper tantrums have tarnished his image among the audience and now, people are beginning to look at him with contempt.

Seeing this as an opportunity to repair his public image, Stephen agrees. Kelly’s rival Jeremy puts roadblocks on her way and also steals her credit to impress Stephen. Despite all that, Stephen and Kelly spark a connection that leads to a Valentine’s special date. Will it progress and make way for love or will Jeremy pull another vile trick?

The movie opened to favorable reviews, especially regarding the combative chemistry between the leads and the picturesque backdrop. In case you are wondering about where was ‘Cooking with Love’ filmed? Read on.

A Jem Garrard creation, ‘Cooking with Love’ released as a part of Hallmark’s Countdown to Valentine’s line-up. It was filmed in and around the coastal seaport city – Vancouver, and Langley, in British Columbia, Canada. The principal photography of the movie began in early December and concluded on December 24, 2017.

Since, the movie features a reality competition show, a major chunk of the shooting had to be done in a studio. And for that, the production unit built a set representing The Little Gourmet on the production facility called Martini Film Studios. Once fully constructed, Martini Film Studios would be Canada’s largest film and production studio. Ali Liebert took to her Instagram to share an adorable picture from the site.

Here’s another picture posted by Ali, showcasing how amazingly well the cast and crew bonded and the tremendous fun they had. I mean, the ear-to-ear smiles say it all.

Ali also shared a picture of the whole cast on their last day of shoot.

Apart from being the highest-populated city in Canada, Vancouver takes pride in being one of the world’s busiest destinations for international film and series productions, thus the label, the Hollywood North. Apart from Langley, most of the filming was carried out in Yaletown, Vancouver. The Hallmark team sent out a notification letter to inform the residents about their schedule.

1100 Mainland Street served as a filming location for exterior shots like the actors walking on the side of the block. Several scenes were filmed outside and inside of Brix and Mortar-Yaletown’s only dining house, on the ultra-modern 1100 Homer Street. The filming unit also shot a few scenes at Emery Barnes Park built in the memory of pro-football player, Emery Oakland Barnes.

Check out the on-location picture of a beaming Ali, alongside Cricketpom.

The movie features Canadian Award winner Ali Liebert as a Kelly, a whip-smart producer of a kid show, The Little Gourmet. Ali has remarkable shows like ‘Bomb Girls,’ ‘Ten Days in the Valley’ and the multiple-award winning movie ‘Wonder’ to her credit. Brett Dalton plays Chef Stephen Harris, a talented chef with a bad boy reputation. You may know Brett from his portrayal of Grent Ward in ‘Agents of S.H.I.E.L.D.’